Objective: KCNT2 gene mutations had been described to cause developmental and epileptic encephalopathies (DEEs). In this study, we presented the detailed clinical features and genetic analysis of two unrelated patients carrying two de novo variants in KCNT2 and reviewed eight different cases available in publications.

Methods: Likely pathogenic variants were identified by whole exome sequencing; clinical data of the patients were retrospectively collected and analyzed.

Conclusion: Overall, the most common phenotypes associated with KCNT2 mutation were IS and EIMFS. Epilepsy phenotype associated with gain- and loss-of-function mutations could overlap. Additional KCNT2 cases will help to make genotype-phenotype correlations clearer.

In total, two unrelated boys were enrolled in our study. Clinical features of affected individuals with KCNT2 variants were summarized in Table 1. 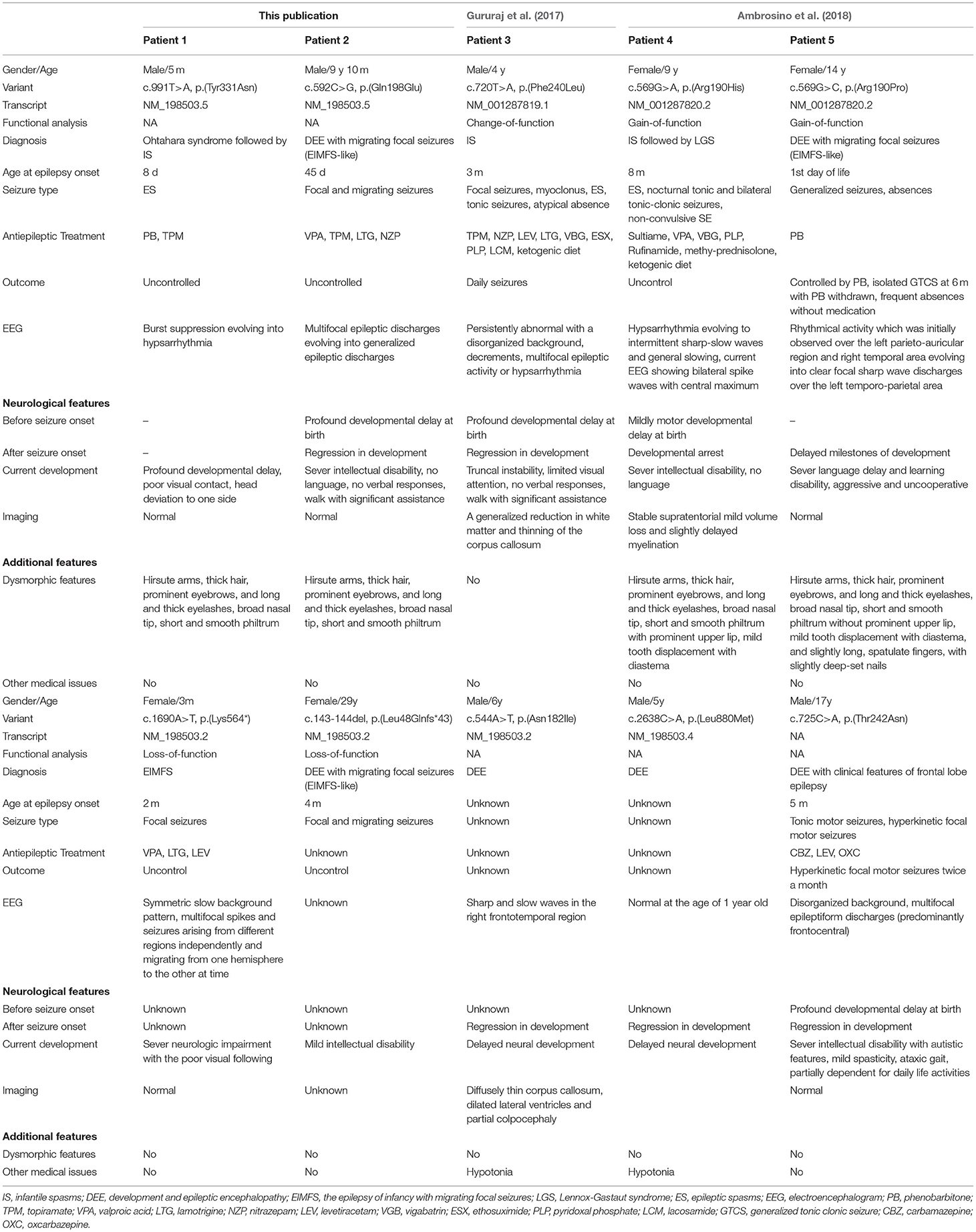 Table 1. Patients with KCNT2 variants in this publication and previous literatures.

Patient #1 was a 5 month-old boy. He was born at 38 weeks of gestation with a birth weight of 2,950 g. He was the first child of healthy non-consanguineous parents. There was no familial history of any neuropsychiatric disease including epilepsy or febrile seizures. He was hypotonic and had a profound delayed development. From 8 days of age, the boy presented with daily clusters of epileptic spasms. The EEG showed burst suppression. At the current age of 5 months, the boy was unable to hold his head with poor visual contact. His body measures were 66 cm and 6.7 kg. The seizures were still uncontrolled on the combination of phenobarbitone and topiramate at the last follow-up. During the course, the semiology evolved from Ohtahara syndrome to West syndrome with severe developmental delay and frequent epileptic spasms. EEG displayed with hypsarrhythmia. Brain magnetic resonance imaging (MRI) at 18 days was normal. The patients manifested dysmorphic features with hirsute arms, thick hair, prominent eyebrows, and long and thick eyelashes and had a broad nasal tip, short and smooth philtrum (Figure 1). 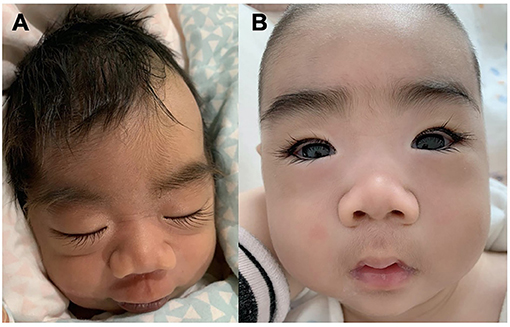 Figure 1. Facial Gestalt of the Patient #1 with de novo KCNT2 variant (A) at birth and (B) at the age of 3 months.

Patient #2 was a 9 year-old boy. He was born at full term of gestation with a birth weight of 3,300 g. He was the first child of healthy non-consanguineous parents. There was no familial history of any neuropsychiatric disease including epilepsy or febrile seizures. He had a profound delayed developmental milestone with raising his head at the age of 1 years and starting to walk at the age of 5 years. According to his parents and medical records, the boy presented with daily seizures of awaking from sleep with the head swinging from side to side and the limbs jerking at 45 days of age. Seizures were mainly focal and migrating. EEG showed multifocal epileptic discharges with left temporal predominance. At the current age of 9 years, the boy had severe intellectual disability, was able to walk with assistance, but had no language and no verbal response. His body measures were 118 cm and 20 kg. He still had frequent seizures under the combination of valproate, topiramate, and clonazepam. The current EEG displayed generalized discharges. Brain MRI at 4 years was normal. 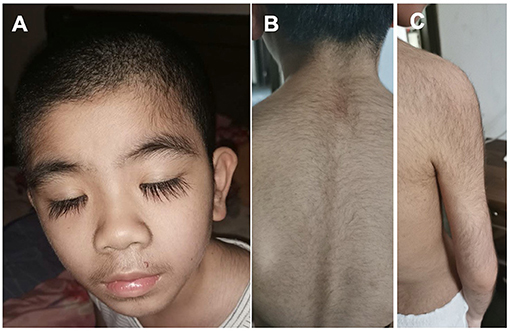 Figure 2. Dysmorphic features of the Patient #2 with de novo KCNT2 variant at the age of 10 years. (A) Facial Gestalt of thick hair, prominent eyebrows, and long and thick eyelashes. (B) Thick hair on the back. (C) Thick hair on the right arm.

Trio-based whole-exome sequencing revealed de novo missense variants of [Chr1:196,395,112A>T, c.991T>A, p.(Tyr331Asn)] and [Chr1:196,465,339G>C, c.592C>G, p.(Gln198Glu)] in KCNT2 gene (NM_198503.5, GRCh37/hg19), respectively, in two patients. Both variants were confirmed by conventional Sanger sequencing. The variants were novel and absent in control populational databases, including 1000 genomes, ExAC, and gnomAD. The pathogenicity of two novel variants was further analyzed using PolyPhen-2 (http://genetics.bwh.harvard.edu/pph2/). Y331N and Q198E substitutions were shown to be possibly damaging (score 0.619 and 0.598, respectively). MutationTaster program (http://www.mutationtaster.org/) showed that both variants were predicted to cause change in protein function and were disease causing. Y331N was localized in the C-terminal part of KNa1.2 and Q198E was localized in S4-S5 of the protein (Figure 3). Moreover, the phenotype of the patients was consistent with that of KCNT2-associated disease. Therefore, both variants were classified as likely pathogenic based on the American College of Medical Genetics (ACMG) guidelines, both mutations were classified as pathogenic with the PS2, PM2, and PP3 criteria (Richards et al., 2015). 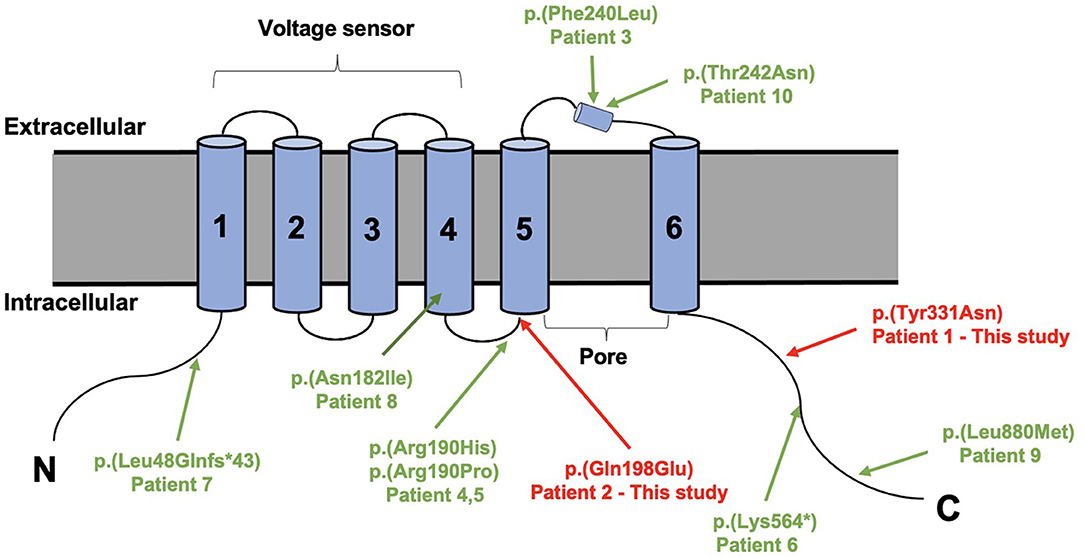 Figure 3. Structure of the sodium-activated potassium (KNa1.2) channel (9606 [NCBI]) with all variants published variants in KCNT2.

As a recently discovered gene associated with epilepsy disorders, a total of eight patients bearing five KCNT2 variants had been reported (Gururaj et al., 2017; Ambrosino et al., 2018; Alagoz et al., 2020; Inuzuka et al., 2020; Mao et al., 2020). The KCNT2-associated DEEs comprises West syndrome as well as epilepsy of infancy with migrating focal seizures (EIMFS). In 2017, Gururaj et al. firstly identified a KCNT2 mutation in an early onset epileptic encephalopathy (EOEE) patient with intractable epileptic spasms by exome sequencing and confirmed the mutation with “change-of-function” effect (Gururaj et al., 2017). At the last follow-up age of 4 years, the patient presented with prolonged tonic seizures, myoclonic jerks and atypical absences with a disorganized background, decrements, multifocal epileptogenic activity or hypsarrhythmia on EEG (Gururaj et al., 2017). We assumed that the semiology of this patient was likely to evolved from infantile spasms (IS) to Lennox-Gastaut syndrome (LGS). In 2018, Ambrosino et al. described two female patients with IS followed by LGS or with DEE with migrating focal seizures. In vitro analysis further suggested that the variants found in patients had gain-of-function effects (Ambrosino et al., 2018). Seizure discharges in the patient with DEE with migrating focal seizures had been observed to migrate from the left to the right hemisphere, which likely corresponded to EIMFS (Ambrosino et al., 2018). Most recently, Mao et al. identified two novel de novo non-sense and frameshift mutations of the KCNT2 gene in two patients diagnosed as EIMFS and early onset epileptic encephalopathy (EOEE) with migrating focal seizures, respectively (Mao et al., 2020). Due to the fact that the latter case was an aged case, diagnosis was not be firmly ascertained and the author described the patient as EIMFS-like EOEE (Mao et al., 2020). They investigated the functional consequence of the two mutations, which showed that both mutations reduced whole-cell potassium current (Mao et al., 2020). Subsequently, there were two reports describing three patients with EOEE caused by mutations in KCNT2 without functional analysis (Alagoz et al., 2020; Inuzuka et al., 2020). Here, our patients showed DEE in common with previous studies. Patient #1 was diagnosed as Ohtahara syndrome subsequently followed by IS with EEG showing burst suppression evolving to hypsarrhythmia. Patient #2 was diagnosed as DEE with migrating focal seizures manifesting profound developmental delay at birth and intractable seizure with developmental regression. Due to incomplete medical records, there was no definitive diagnosis but EIMFS-like EOEE of Patient #2. In general, both gain and loss of function mutations in the KCNT2 gene could lead to DEE, and the most common phenotypes were IS and EIMFS. The epilepsy phenotype associated with gain- and loss-of-function mutations could overlap.

EIMFS is a rare EOEE characterized by polymorphous focal seizures and cognitive, sensory and motor impairment, with arrest of psychomotor development in the first 6 months of life (Coppola et al., 1995, 2006). EIMFS have a genetic origin in which the de novo gain-of-function KCNT1 variants are the most common cause (Barcia et al., 2012; McTague et al., 2013; Rizzo et al., 2016; Villa and Combi, 2016). KCNT1 and KCNT2 respectively encode the KNa1.1 (Slack) and KNa1.2 (Slick) subunits. Both genes belongs to the SLO2 family of the sodium-dependent voltage-gated potassium channel KNa (Bhattacharjee et al., 2003). Functional analysis of mutant channels associated with EIMFS mostly revealed gain-of-function effects (Barcia et al., 2012; Rizzo et al., 2016; Villa and Combi, 2016). Similarly, Ambrosino et al. identified a gain-of-function mutation in the KCNT2 gene in a patient with EIMFS-like DEE. It suggested that pathogenic variants in KCNT1 and KCNT2 therefore might contribute to a similar and overlapping spectrum of DEEs (Ambrosino et al., 2018; Kessi et al., 2020). Meantime, Mao et al. also reported EIMFS in patients carrying loss-of-function mutations in the KCNT2 gene (Mao et al., 2020), which indicated that EIMFS might be caused not only by an increase but also by a decrease in the function of KNa.

Seizures in all patients were intractable and there was a poor prognosis in development. The oldest patient at the age of 29 years still had seizures and showed mild intellectual disability (Mao et al., 2020). Quinidine as an underlying precision medicine for epilepsy syndromes due to gain of function mutations in KCNT1 aroused particular clinical interest (Bearden et al., 2014). Therefore, Ambrosino et al. confirmed by functional analysis that the patients carried quinidine-responsive gain-of-function mutations in the KCNT2 gene and treated one patient with quinidine add-on therapy and achieved marked clinical improvements, including EEG, vigilance, alertness as well as developmental progression (Ambrosino et al., 2018). It suggested that quinidine could be a potential personalized medicine approach for KCNT2-related DEE.

In this study, we presented the detailed clinical features and genetic analysis of two unrelated patients with KCNT2-related DEE and provided a comprehensive outline of available publications regarding KCNT2 mutations. Our data further expanded the spectrum of KCNT2 mutation. So far, with our case, a total of ten cases carrying KCNT2 mutations have been reported. IS and EIMFS were the most common phenotypes caused by pathogenic mutations in KCNT2. Both gain and loss of function mutations could lead to EIMFS. Additional KCNT2 cases will help to make genotype-phenotype correlations clearer. Quinidine could be a potential personalized medicine approach for KCNT2-related DEE. Clinical follow-up of additional patients will further define the clinical spectrum of KCNT2-related DEE and the long-time efficacy on seizures and development of quinidine as an underlying precision medicine for epilepsy syndromes due to gain-of-function mutations.

The sequencing data are available on https://www.ncbi.nlm.nih.gov/bioproject/PRJNA689060.

The studies involving human participants were reviewed and approved by the Ethical Committee of Peking University First Hospital. Written informed consent to participate in this study was provided by the participants' legal guardian/next of kin. Written informed consent was obtained from the minor(s)' legal guardian/next of kin for the publication of any potentially identifiable images or data included in this article.

We extend our appreciation to the patients and their families who participated in this study. We would like to thank Dr. Xiaodong Wang from Cipher Gene, Ltd. for assisting in manuscript editing.

Copyright © 2021 Gong, Jiao, Yu and Yang. This is an open-access article distributed under the terms of the Creative Commons Attribution License (CC BY). The use, distribution or reproduction in other forums is permitted, provided the original author(s) and the copyright owner(s) are credited and that the original publication in this journal is cited, in accordance with accepted academic practice. No use, distribution or reproduction is permitted which does not comply with these terms.