Lung cancer is the leading cause of cancer death among male patients and second leading cause of mortality among female patients in the world (Sung et al., 2021). In the United States of America, although the total cases of lung cancer declined from 2018 to 2020, lung cancer still caused more deaths than breast, prostate, colorectal, and brain cancers combined (Siegel et al., 2020). In China, lung cancer is poised as a heavy burden to public health as it ranks the first in male cancer incidence spectrum (24.17%) and the second in females (15.02%) (He et al., 2020). The most common lung cancer is non-small cell lung cancer (NSCLC), which accounts for ∼85% of total lung cancer cases and has diverse pathological features (Chen et al., 2014). It is critical to find suitable biomarkers for NSLCLC, so cancer patients can be diagnosed and treated efficiently.

Among many of the human-disease-associated lncRNAs, long intergenic noncoding RNA 917 (LINC00917) was initially identified to contribute to pathogenesis of intervertebral disc degeneration (Chen et al., 2015), and associate with Alzheimer’s disease (AD) (Deming et al., 2016). Recently, LINC00917 was found to be aberrantly expressed in human colorectal tumors (Fattahi et al., 2019). However, its association with lung cancer, or other human cancers, has never been elucidated.

In this study, we examined LINC00917 expression levels in serum exosomes of NSCLC patients, and then evaluated the correlations between exosomal LINC00917 and clinicopathologic factors of NSCLC. In addition, we used receiver operating characteristic (ROC) curve analysis and overall survival (OS) analysis to estimate the diagnostic potential of exosomal LINC00917. Our results indicated that serum-derived exosomal LINC00917 had significantly clinical implications as a non-invasive prognositc factor for NSCLC.

All clinical and experimental procedures were reviewed and approved by the Human Study Ethics Committees at the Qingdao Huangdao District Central Hospital in Qingdao City, Shandong Province, China. Informal consent forms were signed by all participating patients prior to the onset of the study. All protocols were performed in accordance with the Declaration of Helsinki (World Medical Association, 2014).

A total of 179 patients diagnosed with non-small cell lung cancer (NSCLC) between June 2019 and April 2021 were enrolled in this study. Correspondingly, a total of 104 baseline-matched healthy control patients were selected. For all enrolled participants, clinical records were reviewed by two independent physicians, to ensure that nobody underwent major surgeries, chemotherapies radiotherapies or immunotherapies within 180 days prior to the onset of the study. In addition, NSCLC Patients’ staging was categorized in accordance with the seventh edition of AJCC staging guideline (Edge and Compton, 2010).

All statistical analyses were conducted using a R Data Analysis App [4.0.3 GUI 1.73 Catalina build (7892)] (https://www.r-project.org/). Quantitative comparisons of exosomal LINC00917 expression levels were conducted using a Wilcoxon Ran Sum Test if there were two patient groups, whereas a Kruskal-Wallis Rank Sum Test was used if there were three or more patient groups. A pROC package (https://cran.r-project.org/web/packages/pROC/pROC.pdf) was used to draw Receiver operating characteristic (ROC) curves and calculate area under the curve (AUC). A Chi-squared test was used to analyze the significances of associating exosomal LINC00917 expression level with NSCLC patients’ clinicopathological factors. A survival package (https://cran.r-project.org/web/packages/survival/survival.pdf) was used to analyze NSCLC patients’ overall survival (OS), and a Kaplan–Meier method with log-rank was performed to compare OSs between different patient groups. Finally, univariate and multivariate cox regression models were conducted to analyze the independence of using exosomal LINC00917 level to predict NSCLC patients’ OS. For all analyses, differences with p values < 0.05 were termed as statistically significant. 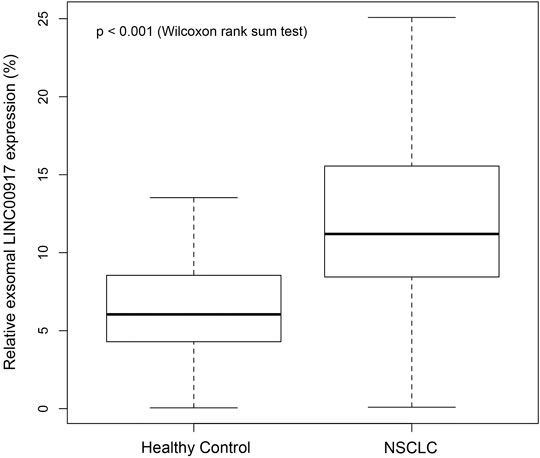 Exosomal LINC00917 expression levels were also compared among NSCLC patient sub-populations. qRT-PCR analysis showed that, exosomal LINC00917 expression levels were undifferentiated between patients aged 65 and older, and those younger (Figure 2A, p = 0.6263); between male and female patients (Figure 2B, p = 0.6842); among patients who were non-smokers, current-smokers or formal-smokers (Figure 2C, p = 0.3223), among patients diagnosed with squamous-cell-, adeno- or large-cell- carcinomas (Figure 2D, p = 0.5188), or between patients diagnosed with either positive or negative lymph-node metastasis (Figure 2F, p = 0.1935). 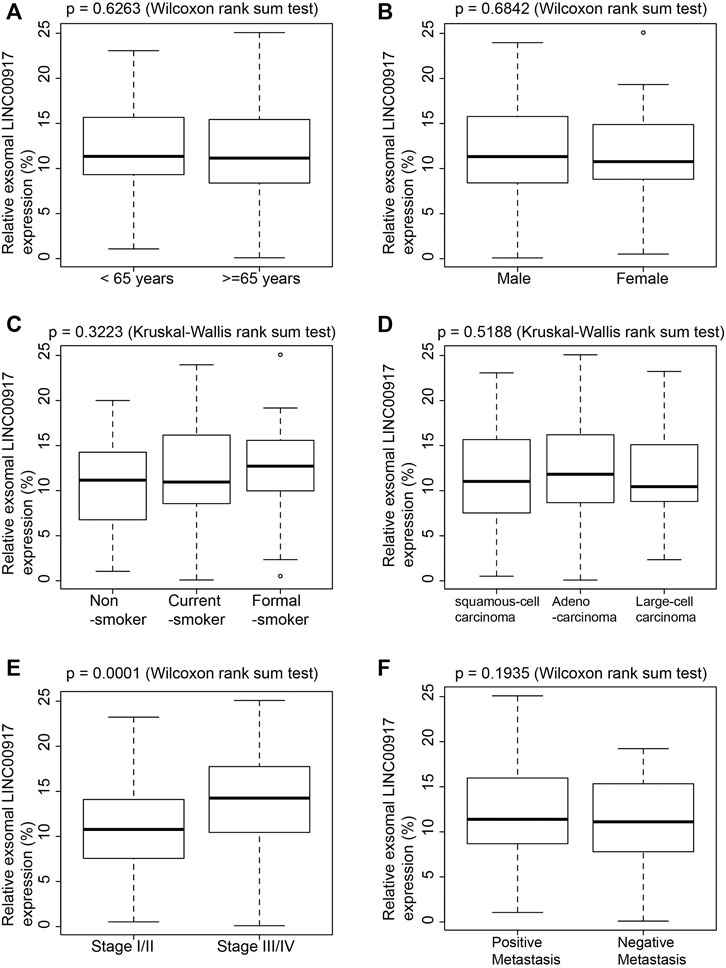 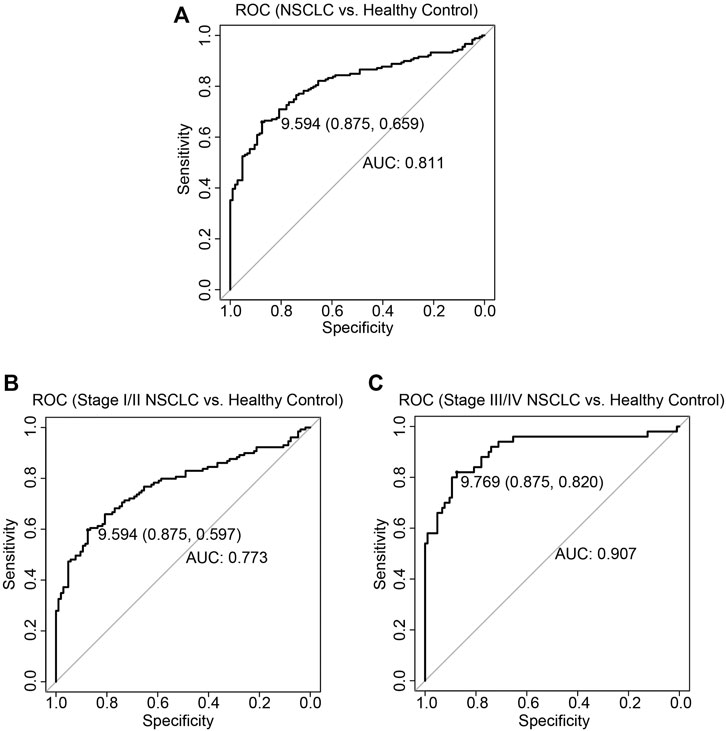 Exosomal LINC00917 was Correlated With Overall Survivals of NSCLC Patients 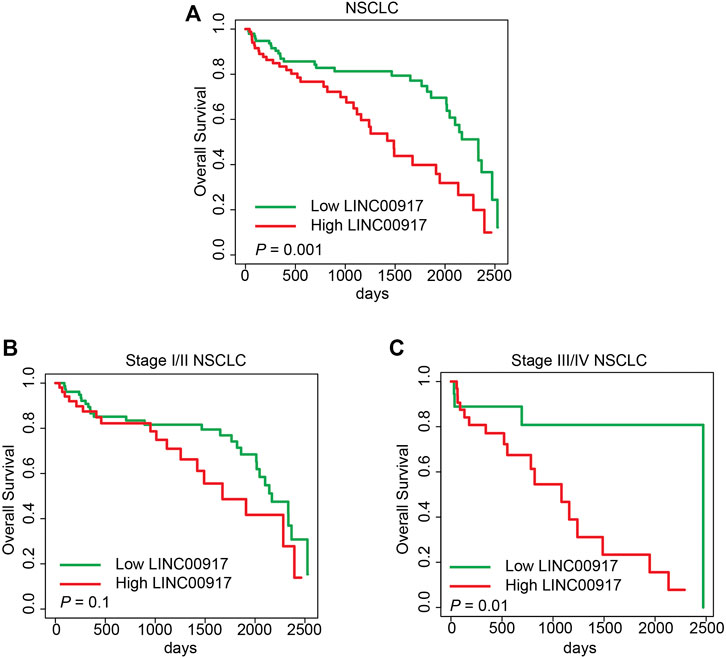 While the results of our study are encouraging, drawing a conclusive statement of exosomal LINC00917 being a non-invasive NSCLC biomarker may be premature as certain limitations are associated with our study. First, the numbers of participating NSCLC patients and baseline-matched healthy controls were relatively limited. A multi-Province multi-center cohort study with larger patient population is needed to validate the findings in our study. Second, further clinical investigation, such as examining NSCLC patients’ in situ tumors, is needed to specify the origin of exosomal LINC00917 and verify its association with cancer patients’ prognosis. Furthermore, genetic and biochemical approaches are necessary to reveal the possible functional roles of LINC00917 in regulating NSCLC tumor carcinogenesis and development.

The studies involving human participants were reviewed and approved by Human Study Ethics Committees at the Qingdao Huangdao District Central Hospital. The patients/participants provided their written informed consent to participate in this study.

Copyright © 2021 Xiong, Wang, Yang, Han and Zhan. This is an open-access article distributed under the terms of the Creative Commons Attribution License (CC BY). The use, distribution or reproduction in other forums is permitted, provided the original author(s) and the copyright owner(s) are credited and that the original publication in this journal is cited, in accordance with accepted academic practice. No use, distribution or reproduction is permitted which does not comply with these terms.