Embedded real-time vision applications are being rapidly deployed in a large realm of consumer electronics, ranging from automotive safety to surveillance systems. However, the relatively limited computational power of embedded platforms is considered as a bottleneck for many vision applications, necessitating optimization. OpenVX is a standardized interface, released in late 2014, in an attempt to provide both system and kernel level optimization to vision applications. With OpenVX, Vision processing is modeled with coarse-grained data flow graphs, which can be optimized and accelerated by the platform implementer. Current full implementations of OpenVX are given in the programming language C, which neither supports advanced programming paradigms, such as object-oriented, imperative, and functional programming, nor does it has runtime or type checking. Here, we present a python-based full Implementation of OpenVX, which eliminates much of the discrepancies between the object-oriented paradigm used by many modern applications and the native C implementations. Our open-source implementation can be used for rapid development of OpenVX applications in embedded platforms. Demonstration includes static and real-time image acquisition and processing using a Raspberry Pi and a GoPro camera. Code is given in Supplementary Material. Code project and linked deployable virtual machine are located on GitHub: https://github.com/NBEL-lab/PythonOpenVX.

Three main challenges are currently considered as bottlenecks in the embedded vision pipeline: the growing diversity of camera hardware, the relatively limited computational resources of embedded and real-time platforms, and the execution of vision-based decisions, due to the required integration with other components, such as sensors and actuators (Lee et al., 2015; Dedeoğlu et al., 2011). Obviously, the underlying challenge of each bottleneck is standardization.

OpenVX is a standardized interface, designed by the Khronos Group and released in late 2014, in an attempt to provide both system and kernel level optimization by modeling the system with graphs, which can be used for optimization and acceleration by the platform implementer (Rainey et al., 2014; Lin et al., 2015; Tagliavini et al., 2014). This model of standardization defers the responsibility for optimization from the user to the platform developer – separating the application and the hardware knowledge domains. For example, NVIDIA Corporation, one of the world’s leading companies in the design of graphics processing units (GPUs), developed the VisionWorks toolkit – an implementation of OpenVX for CUDA-capable GPUs and System on Chips (Soc) (Elliott et al., 2015). CUDA is a software layer, also developed by NVIDIA, that encapsulates GPU with a virtual instruction set, which enables a distributed execution of kernels. The development model of OpenVX is similar to the standardization of computer graphics provided by OpenGL (Rainey et al., 2014), which specifies an abstract interface for defining graphical components. OpenGL applications are extensively used in a wide spectrum of fields ranging from virtual reality to computer-aided design.

Briefly, an OpenVX application starts with constructing a directed acyclic graph in which nodes representing atomic kernels performed on image data. Nodes are connected internally via virtual images (which can be optimized out) and externally via real images. Essentially, image processing stages are arranged in a connected graph. Nodes (or processing primitives) are then distributed to available hardware, as it is implemented by the OpenVX implementation provider. OpenVX defines an extendible library of ~40 primitives ranging from simple arithmetic to key points detection or tracking (Khronos Group, 2016). Basic CV data structure includes images, convolution matrices arrays, and scalars. We note that OpenVX did not invent the concept of harnessing the expression power of graphs to accelerate vision application. This idea was already proposed by Olson et al. (1993), who described vision processing in terms of coarse-grained data flow graphs, constructed using a graphical interface. However, while their implementation was specifically designed for the Datacube MV20, a pipeline image processor that was once widely used for research and robot vision, OpenVX provides a standardization of the process – regardless of the used hardware. 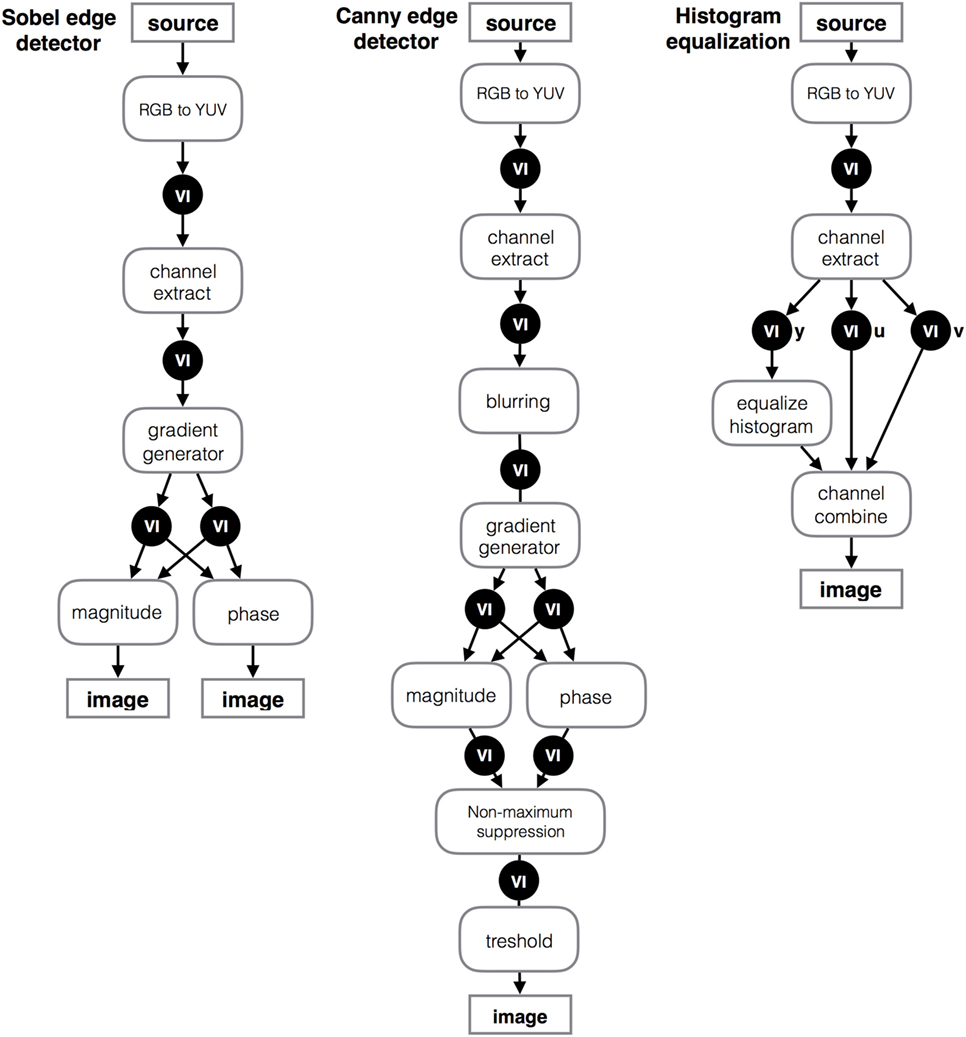 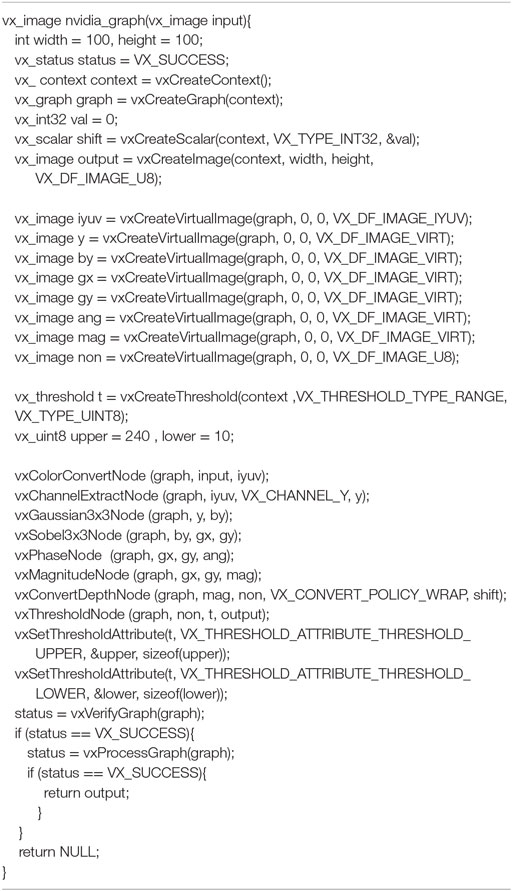 Code listing for Sobel edge detection and histogram equalization, which were described above, is given in Code listing S1 and S2 in Supplementary Material, respectively.

Modern programming environments, such as C#, Java, Python, and others, offer a more efficient and simple environment relative to C. They feature high-levels of expressions, greater readability and object-oriented architecture. A naïve solution for bridging different programming environments is called language binding. Binding acts as a bridge between one programming language to another, allowing invocation of kernels from different environments. For example, OpenGL, which was built upon the same development model as OpenVX, has many language bindings such as for JavaScript (WebGL), C, and Java. Indeed, the official release of OpenVX includes language binding services to Java and Ruby. Both are high level programming languages that supports modern programming paradigms. Although bindings play important roles in cross-platform applications, they are only a “glue-code” that bridge incompatibilities between languages. They do not contribute functionality or framework, and therefore, they are not sufficient to simplify or enrich low level implementation with modern approaches.

Python is a cross-platform, widely spread programming language, which is also interpreted, dynamic, and modern, that supports multiple programming paradigms, such as object-oriented, imperative, and functional programming. Many examples for Python-binded implementations exists; among them are PyGtk, which binds the Gtk Toolkit – a cross-platform toolkit for the generation of graphical user interfaces, originally written in C, and rpy2, which is used to bridge the language R to Python.

Here, we utilized a binding implementation for Python and C, to provide a Python-based full object-oriented framework for OpenVX.

Application, Example of Use, and Methods

OpenVX provides a definition of a series of image processing kernels, which can be combinatorially interconnected to form graphs for the implementation of complicated vision tasks. Here, we utilized various kernels to implement edge detections and histogram equalization graph models as they were described above. 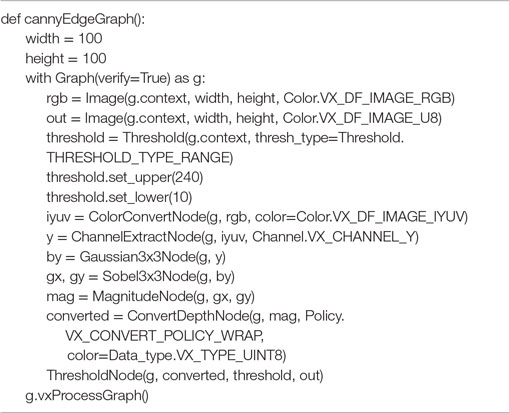 We utilized Python 2.7.6, the compiled sample implementation of OpenVX provided by Khronos, PyVX, and our implementations of OpenVX for edge detections and histogram equalization on a Raspberry PI 3 Model B board. Results are shown in Figure 2A. Files are provided in our code repository as stated in the Code repository section. We used the PyCharm Python development environment by JetBrains. 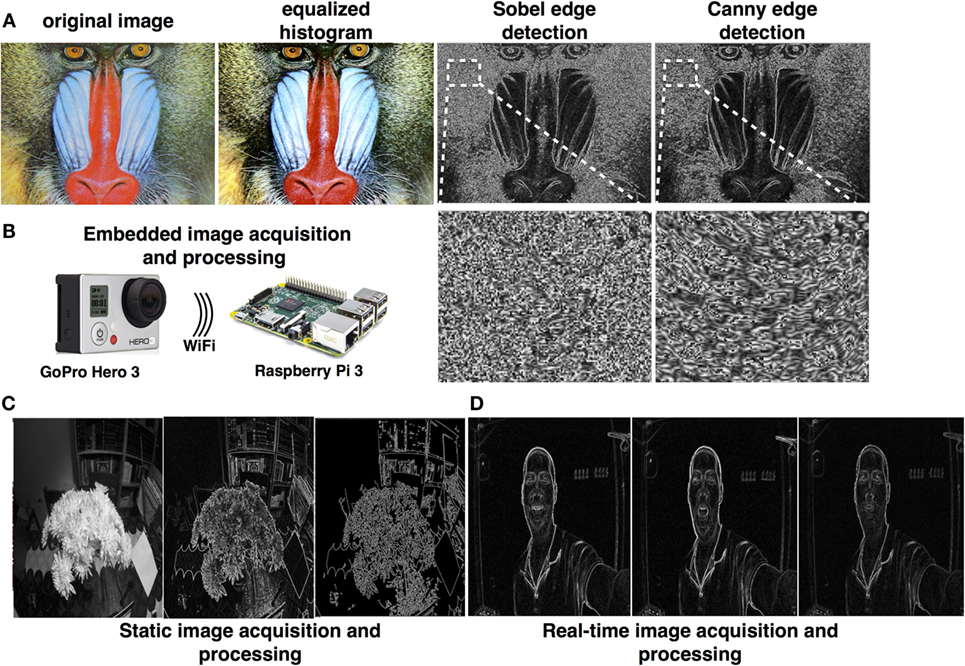 Figure 2. (A) Sample results of executing histogram equalization, Soble edge detection, and Canny edge detection using our Python implementation of OpenVX. (B) Schematics of our embedded framework, which is comprised of a Raspberry Pi and a GoPro camera. (C,D) Static and real-time image acquisition and processing.

In order to exemplified the embodiment of OpenVX in an image acquisition module, we deployed our framework on a Raspbery-Pi 3, connected it to a GoPro camera (with fish-eye lens) and performed phase and edge detection processing. Setup and results from an image taken statically from the camera is shown in Figures 2B,C, and real-time processing is shown in Figure 2D. Code is given in Code listing S5 in Supplementary Material.

Embedded vision applications are currently constrained by the growing diversity of camera hardware, the relatively limited computational resources of embedded and real-time platforms and the execution of vision-based decisions. An attempt to relax the second constraint of limited computational resources in embedded platforms was made in late 2014 by Khronos Group, which released their OpenVX standardization for vision optimization. OpenVX provides definitions of 41 image processing kernels, which can be combinatorially interconnected as graphs for the implementation of complicated vision tasks.

Current full implementations of OpenVX are given in C, a fact that limits the usability, readability and adaptability of OpenVX application due to the language’s lack of support of modern programming paradigms and advanced error handling. Previous attempts to provide implementation of OpenVX in Python, including PyVX (Ardo, 2014). PyVX neither includes implementation of kernels nor a full object-oriented framework for OpenVX. On the other hand, PyVX provides a bridge, or a “glue-code,” between the C implementation and Python, providing us with an important stepping stone toward our end-goal of providing a Pythonic object-oriented framework for OpenVX. We used PyVX as a binding service and provided a full object-oriented framework to OpenVX. Our library can be used to implement OpenVX applications on open-source embedded platforms that support Python, such as Raspberry pi and Arduino. Other platforms, such as iOS-based devices, may need to use an additional interpreter, such as Pythonista, to use this framework. We note that since image acquisition is not a part of OpenVX, our framework has to be embedded within an existing image acquisition module as was exemplified above.

Empowering open-source embedded platforms with a straight forward API in a powerful programming language can open a broad spectrum of new possibilities.

Supporting files: OpenVX sample OpenVX implementation and the PyVX package – both are freely available. In order to ease framework installation, we have created a virtual machine that contains the operating system, the compiled environment, and examples, and can be deployed any VM framework, such as Oracle VirtualBox. Download links and detailed instructions for use are given in the README file, located at the repository.

ET and OH conceptualized and designed the framework. OH wrote the code, and ET wrote the manuscript.

This work was supported by JCT research grant.

The Supplementary Material for this article can be found online at https://www.frontiersin.org/article/10.3389/fict.2016.00028/full#supplementary-material.

Copyright: © 2016 Heimlich and Ezra Tsur. This is an open-access article distributed under the terms of the Creative Commons Attribution License (CC BY). The use, distribution or reproduction in other forums is permitted, provided the original author(s) or licensor are credited and that the original publication in this journal is cited, in accordance with accepted academic practice. No use, distribution or reproduction is permitted which does not comply with these terms.