Background: Clostridium difficile is an important cause of infectious colitis among hospitalized patients across the globe. The pathogenic potential of C. difficile in producing significant morbidity and mortality is mainly due to production of toxins A and B. The outbreaks of C. difficile infection (CDI) are due to changes in the genetic sequences of the organism. There is hardly any molecular study reported on the prevalent types of C. difficile strains in India. Toxinotyping and sequencing of locally circulating C. difficile isolates from patients presenting to our tertiary care center of North India were done.

Materials and methods: C. difficile strains (n = 174) isolated from 1,110 fecal samples from patients with suspected CDI were subjected to toxinotyping and partial sequencing of tcdA and tcdB genes. Comparison of nucleotide sequences with reference C. difficile 630 strain using BLAST was made and translated into corresponding amino acid sequences by ExPASy.

Clostridium difficile, an anaerobic spore-bearing organism, is an important cause of infectious colitis among in-patients across the globe and particularly so in North America and Europe (1). The increase in the morbidity and mortality due to C. difficile is worrisome. Clinically significant strains of C. difficile are capable of producing two major toxins: toxin A (TcdA) and toxin B (TcdB), which are encoded by tcdA and tcdB genes, respectively, present on the 19.6 kb pathogenicity locus (PaLoC) of C. difficile chromosome (2, 3). From 2003 onward, several outbreaks have been reported due to NAP1/BI/027, a high-level toxin-producing C. difficile strain isolated from North America (3), Europe (4), and Japan (5). NAP1/BI/027 is more prolific in sporulation than its non-hypervirulent counterpart and produces more amount of toxins than the historical strain (4). The C. difficile infection (CDI) outbreaks are due to changes in the genetic sequences called the “genetic switch” (6). Comparison of whole genome sequencing of historical strain with the hypervirulent strain showed that C. difficile had acquired genes that enabled it to survive better in the environment (7). This hypervirulent strain is also linked with a more serious course of infection, higher relapse rate, and complications leading to higher mortality (8).

Apart from the NAP1/BI/027, several other C. difficile strains have been reported from various countries (1). Also, strains that produce only toxin B but not toxin A have appeared in Asia (9) and Latin America (10). The occurrence of different C. difficile strains circulating globally has led to the advancement of methods for a better insight into the pathogenicity of various strains in the etiology of nosocomial outbreaks and to provide a better follow-up of the epidemiology of the disease (11).

The study protocol was approved by the Institute Ethics Committee and was carried out in accordance with the recommendations of ICMR Ethical Guidelines for Biomedical Research in India, New Delhi, with written informed consent from all subjects in accordance with the Declaration of Helsinki. A total of 1,110 (M:F = 1.8:1; age range >2–95 years) consecutive hospitalized patients who developed diarrhea after ≥72 h of admission in various wards and suspected of CDI by the clinicians were enrolled for the investigation (12). Patients with incomplete data, pregnant women, and children <2 years were excluded (12). Apart from Chandigarh, our tertiary care referral hospital accommodates patients from various regions of North India inclusive of Jammu and Kashmir, Punjab, Haryana, Himachal Pradesh, Uttar Pradesh, and Rajasthan as reported earlier (12). The patients were clinically evaluated for CDI symptoms inclusive of fever and pain abdomen by the clinicians. CDI was diagnosed/suspected by the clinicians based on clinical signs and symptoms (diarrhea/fever/abdominal pain/antibiotic exposure) and/or endoscopic evaluation.

Toxigenic C. difficile isolates were identified for changes in PaLoc region by toxinotyping method (14). The entire tcdA and tcdB genes were amplified using six different overlapping PCRs (Table 1). In brief, isolation of DNA was carried out by the phenol–chloroform technique, and PCR amplification was carried out in a Mastercycler (Eppendorf, Germany). PCRs were done in 50 μl volume containing DNA (300 ng), each paired primer (15 pmol), a concentration of each deoxynucleoside triphosphate (200 μM), and Taq polymerase (2.5 U). Two-step PCR programs used included initial denaturation at 93°C for 3 min and annealing and extension for 8 min at 56°C (fragments A1 and A2) or at 47°C (fragments A3, B1, B2, B3), followed by denaturation at 93°C for 4 s. Agarose (1.5%) was used to visualize the size differences in the amplified fragments, which were further subjected to digestion with different restriction enzymes to identify polymorphism.

Partial sequencing of 10 representative isolates, each of amplified tcdA and tcdB genes were performed to identify the nucleotide changes in them. The sequencing of fragments was carried out by Di-deoxy Sanger method. Comparison was made with known sequences of the tcdA and tcdB genes of reference strain C. difficile 630 (ribotype 012; toxinotype 0) using basic local alignment search tool (BLAST 2.2.29+) software accessed online from the National Center of Biotechnology Information (15). Nucleotide sequences alignment was done by multiple sequence comparison using log-expectation software and translated into amino acids by expert protein analysis system to detect the amino acid substitutions. 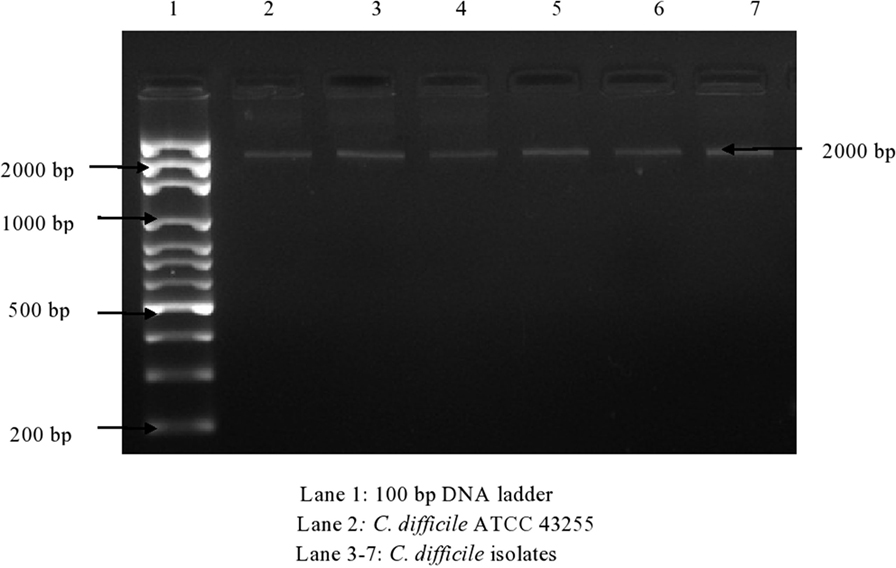 Figure 2. Polymorphic restriction patterns of B3 fragment of tcd B gene by RFLP.

Sequences of Toxin A and B Genes

In all the representative isolates—10 each for toxin A and toxin B genes—the expected 624 and 591 bp bands of tcdA and tcdB, respectively, were found. The sequence of tcdA and tcdB genes of reference strain aligned with tcdA and tcdB genes of the isolates showed substitutions in toxin A sequences of five C. difficile isolates (Figure 3). In three isolates, cytosine was changed to thymine, and in another two isolates, adenine was replaced with guanine in tcdA gene (Table 3). In toxin B, there was no variation in the nucleotide sequences of any of the isolate. The annotated sequences of these isolates have been deposited with the National Center of Biotechnology, USA (Accession nos. KP182924-28). 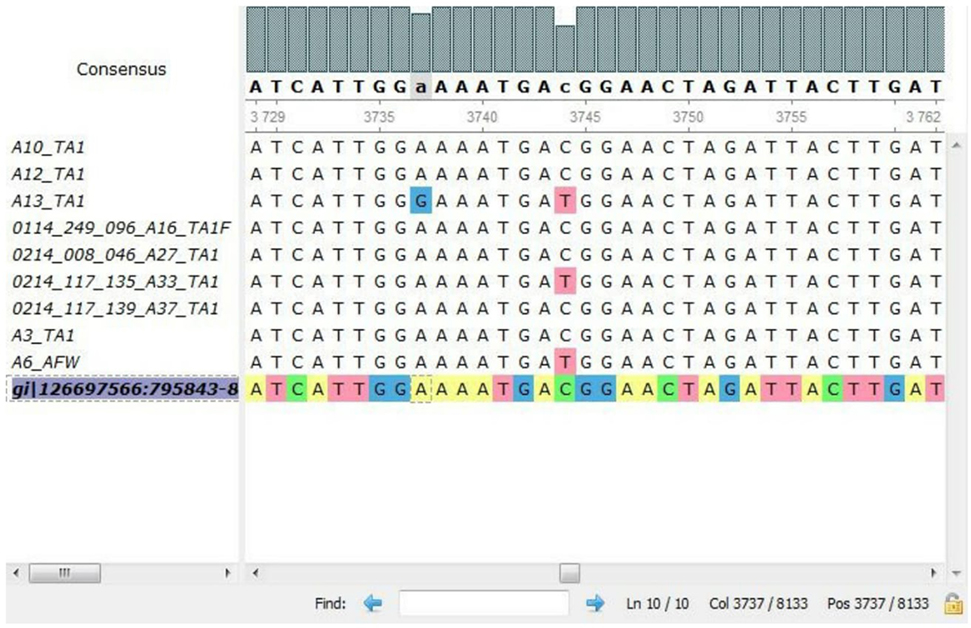 The studies on CDI throughout Asia (9) and particularly India are limited due to the difficulty in culturing the pathogen as well as lack of funding. The current known burden of CDI in the local region is 17.5% (16). As reported earlier (13), toxigenic isolates were highly associated with cancers (77.3%), followed by surgery (75.0%) and gastrointestinal diseases (70.5%).

Due to the changes in the gene sequence of the toxin, the protein structure may also change leading to non-recognition by specific antibodies used in the diagnostic assays, and thus, cases of CDI may be missed. PCR amplification of toxigenic genes can help identify pathogenicity of C. difficile isolates because of its high sensitivity (17). As reported earlier (13), of the 121 toxigenic isolates, 68 (56.2%) possessed both the toxigenic genes (tcdA and tcdB), whereas the remaining 53 (43.8%) had one of the toxin genes. Only the toxin A (tcdA+ tcdB−) gene was found in 13 (10.7%) and only the toxin B (tcdA− tcdB+) gene in 40 (33.1%) of the toxigenic isolates.

PCR ribotyping compares the patterns of PCR products of the 16S-23S rRNA intergenic spacer region (24). It has been established that toxinotyping and PCR ribotyping correlate well with each other (25). The 121 toxigenic C. difficile isolates belonged to ribotype 001 (36.8%), ribotype 017 (33.9%), and ribotype 106 (13.2%) as identified earlier (13), which is in accordance with other Asian studies where the most prevalent ribotypes were 001 and 017 (9). On comparison of ribotyping with the presence of toxin genes, our work complements and corroborates these studies.

Several commercial kits available in earlier CDI diagnostic kits were designed to detect toxin A alone, and, therefore, A−B+ cases were getting missed. ELISA kits that detect only toxin A may miss out on toxins from isolates of A−B+ strains and thus result in wrong interpretation as the role of toxin B in causing CDI is equally important. Of 174 C. difficile isolates, 95 (54.6%) expressed toxins by ELISA (Paper under print). As of now, sequencing is the best technique to identify and to look for any variations in the genetic sequences and will be therefore helpful for clinicians to identify the genotype, consequently aiding in treatment decisions. In the present study, substitutions were found in tcdA sequences of five isolates but none in tcdB gene. Changes in the nucleotide sequence of tcdA gene suggest variation in the strains and highlight the usage of C. difficile diagnostic methods to detect both toxins A and B (26). Horizontal gene transfer could be responsible for the variability in the C. difficile DNA fragments amplified and sequenced (27). Molecular mechanism accountable for the lack of tcdA− strains in 017 toxinotype could be due to sequence variation compared with toxigenic strains. Interestingly, NAP1/BI/027 isolates were not present in our study, and this absence corroborates with the less severe kind of CDI detected in the region. However, further study is required at other parts of the country.

Outbreaks of C. difficile are a global phenomenon, and India has also risk of such outbreaks. Therefore, establishment of a global surveillance system is required for efficient control of CDI. Also, due to the widespread prevalence of ribotype 017 with only tcdB gene in Asia including India, the assay for identification of toxin B emerges to be more imperative than toxin A for diagnosis of CDI. Clinically, this study is useful in considering the ribotype and toxinotype trends in relation to antimicrobial resistance of C. difficile in India. Genetic variations in C. difficile isolates may alter the sensitivity and specificity of diagnostic assays. Moreover, the characterization of C. difficile is likely to facilitate and contribute to the development of an effective vaccine. Therefore, local data of the toxigenicity and genetic variations of C. difficile isolates can be very useful.

Full name of the ethics committee: Institute Ethics Committee, Post Graduate Institute of Medical Education and Research, Chandigarh. Consent procedure: The patients whose fecal samples were collected were informed about the investigations to be conducted on their samples, and informed written consent was obtained. No vulnerable populations were involved.

This project was funded by Council of Scientific and Industrial Research, New Delhi, India [grant no. 27(259)/12].

Copyright: © 2017 Singh, Vaishnavi, Mahmood and Kochhar. This is an open-access article distributed under the terms of the Creative Commons Attribution License (CC BY). The use, distribution or reproduction in other forums is permitted, provided the original author(s) or licensor are credited and that the original publication in this journal is cited, in accordance with accepted academic practice. No use, distribution or reproduction is permitted which does not comply with these terms.