Objectives: Cigarette smoking has been shown in European populations to be associated with rheumatoid arthritis (RA) susceptibility. This study aims to examine the association of smoking with RA in the Han Chinese population.

Conclusion: This is the first study to examine the association of cigarette smoking with RA in the Han Chinese population. This study shows a trend toward an interaction between smoking and SE carriage influencing the risk of RA, though findings were not statistically significant. It is possible that in the presence of universal exposure to heavy air pollution the effect of smoking on RA risk may be obscured.

Rheumatoid arthritis (RA) is a complex immune-mediated disease that is thought to arise due to the interacting effects of environmental and genetic factors. Several studies performed in populations of European ancestry have suggested that smoking is an environmental risk factor increasing the risk of RA (1–3). Carriage of the HLA-DRB1 shared epitope (SE) is the most important genetic risk factor for RA, accounting for approximately 40% of genetic susceptibility to the disease (4). Several studies have reported that smoking interacts with HLA-DRB1 in increasing the risk of anti-cyclic citrullinated peptide antibody (ACPA)-positive, but not ACPA-negative, RA (5–7). This suggests that the pathogenesis of ACPA-positive RA might differ from that of ACPA-negative disease (8), although the extensive sharing of genetic associations between the two subtypes of RA (9) indicates that they have marked similarity of genetic architecture.

The studies showing that cigarette smoking was associated with RA and ACPA risk have almost exclusively involved populations of Caucasian ancestry. Evidence of association of smoking specifically with ACPA-positive RA has thus far been restricted to studies of European-descent ethnic groups. Studies in Koreans and in African-Americans have found that while smoking increased the risk of developing RA-overall, the association was not restricted to ACPA-positive disease (10, 11). Smoking rates in Chinese are very high, with 52.7% of males being ever smokers. While smoking rates in women are lower (about 2.4%) they are increasing (12). Therefore, it is of great relevance to investigate the role of smoking in the Han Chinese population with RA.

Among these 718 cases, 191 were recruited from Shanghai Changzheng Hospital, 349 from Shanghai Guanghua Hospital, 49 from Shanghai Tongji Hospital, 28 from Peking Union Medical College Hospital, and 91 Huaxi Hospital. All patients were diagnosed in accordance with the American College of Rheumatology 1987 classification criteria (13). 404 healthy controls (blood donors on no prescription medications) were recruited from Shanghai. All human studies have been approved by the Research Ethical Committee of Second Military Medical University, and all patients and controls gave informed written consent for their participation in the studies. Patient charts were reviewed to collect the patients’ demographic information, disease duration, and smoking history before the disease onset. Questionnaires were designed to collect the controls’ demography and smoking information. We defined who ever smoked cigarette as smokers. We also defined ≥10 pack-years as heavy smoker when assessing smoking cumulative effect. EDTA preserved blood was collected from all cases and controls for DNA extraction, and serum samples from all cases. Radiographs of the hands and wrists were obtained at recruitment and scored by two independent experienced radiologists using the modified van der Heijde–Sharp score in 517 of 718 cases. Patients with available scores were classified as having either erosive disease (Sharp erosion score > 0) or non-erosive disease (Sharp erosion score = 0) (14).

IgG ACPA titers were measured by a commercially available second generation (CCP2) enzyme-linked immunosorbent assay (ELISA, EUROIMMUN, Lubeck, Germany) and were considered to be positive at a cut of value >5 IU/ml in accordance to the instructions of manufacturer. IgM rheumatoid factor (RF) was measured by ELISA (EUROIMMUN, Lubeck, Germany) and considered to be positive when the titers were ≥20 RU/ml.

Differences of gender, smoking, and SE carriage between groups were investigated using the chi-squared test, and Student’s t-test was used to examine the differences of age between cases and controls. Logistic regression was used to examine the association of smoking (ever smokers vs. never smokers, <10 pack-years and never vs. ≥10 pack-years) with affection status, ACPA carriage, RF-IgM positive disease, and baseline radiographic erosions, adjusting for SE status (positive or negative), age, and gender given the differences in these characteristics between cases and controls.

Logistic regression analysis was used to calculate the association of smoking–SE interaction with all patients, carriage of ACPA or RF, and radiographic erosions (16). The attributable proportion (AP) due to interaction (where an AP = 0 corresponds to no interaction and an AP = 1.0 corresponds to “complete” interaction) and corresponding 95% confidence intervals were calculated (17). A p-value of <0.05 was considered statistically significant. All analyses were conducted using SPSS13.0 (Chicago, IL, USA). 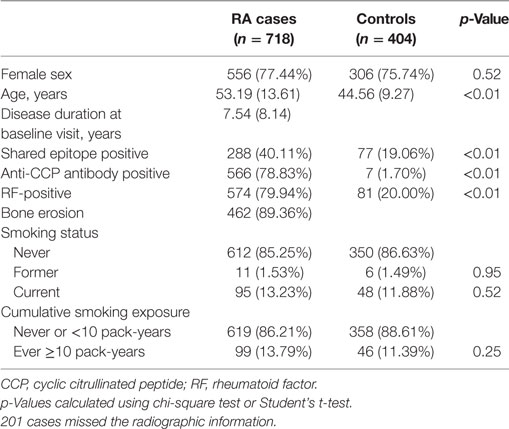 Table 4. Assessment of interaction between HLA-DRB1 shared epitope (SE) (positive or negative) and smoking (ever or never) in rheumatoid arthritis (RA) risk in Chinese Han population.

To the best of our knowledge, this is the first study to evaluate the association of cigarette smoking with RA in the Han Chinese population. The results of our study showed that while smoking was not significantly associated with RA, serological positive RA, or radiographic erosions in Chinese patients trends toward associations were noticed in nearly all analyses. Based on previous studies (5–7), Klareskog et al. hypothesized that smoking might trigger citrullination in the lungs of the individuals who carry the HLA-DRB1 SE, thereby providing a substrate for immune activation that finally causes ACPA-positive RA (8). However, epidemiology studies from Korean, Japan, and China have previously not shown any association between smoking, HLA-DRB1, and ACPA-positive RA (9, 18, 19). In this study, we have recruited 718 cases and 404 healthy controls, and logistic regression analysis can remove this bias caused by age and gender (16). In our study, smoking (either ever compared with never smokers, or cumulative dose) was non-significantly associated with both risk of RA-overall, and among ACPA-positive and -negative and RF-positive and RF-negative cases, and presence of baseline erosions. We do not see a formal interaction between smoking and SE carriage in the development of ACPA-positive disease. However, greater increases in risk were seen for SE-positive smokers compared with either SE-negative smokers or SE-positive non-smokers for RA-overall, ACPA-positive and -negative RA, and RF-positive and -negative RA, considering either ever compared with never smokers or cumulative smoking exposure. These findings, while individually not statistically significant, are consistent with and support the presence of interaction between smoking, SE carriage, and the risk of RA. The similarity of findings of the effects of smoking and SE carriage between ACPA-positive and -negative RA suggests that the interaction is not restricted to ACPA-positive disease, as originally suggested.

Another potential explanation for the different results in our study compared with previous studies is the proportion of smokers among RA cases. In studies that involving American or European subjects, more than half of the RA patients and more than 40% healthy people were ever smokers (2, 5). Smoking rates among Chinese women are much lower, with only 2.4% women being ever smokers (12). This is consistent with the low rate of smoking among females in our study. This would lead to lower power to identify an association between smoking and RA and to investigate interactions between smoking, HLA-DRB1, and RA.

It is also possible that smoking effects were obscured by high exposure to other environmental agents. For example, personal smoking effects could have been obscured by passive smoking, which we did not assess but which is a major public health problem in China. We also hypothesize that air pollution could play a role. While in Europe and USA air pollution was not associated with RA (21, 22), the very heavy air pollution found in major Chinese cities is a possible contributing factor. Indirect evidence only exists to support this hypothesis. First, a new study (23) found association between airway insults and peptide citrullinations in lungs suggesting that smoking-induced inflammation, rather than smoking itself, contributes to an increase in citrullination in lungs. Second, in the Korea population, whose genetic background and SE constitution are similar with Chinese, but where air pollution is not as marked (24), the effect of smoking on RA risk is observed (9). Third, the prevalence of RA was higher in China than that in South Korea [0.37% (25) vs. 0.27% (26)]. This phenomenon may be due to air pollution exposure being more prevalent than smoking. Fourth, smoking (27) as well as fine atmospheric particulates (PM2.5) (24) were reported to be associated with Oxidative Stress, so we speculate that high concentration of PM2.5 may obscure the effect of smoking. Clarifying the relationship between PM2.5 and RA will help us learn more about the pathogenesis of RA.

In conclusion, this study provides support to the existence of interaction between smoking and HLA-DRB1 in the pathogenesis of RA. However, the effect is not as strong as reported in other East Asian countries or in European or North American studies. This may be related to statistical power, or an alternative explanation that greater exposure to other potential environmental factors may act as triggers for the disease, such as passive smoking and industrial air pollution, in China. Further studies will be required to investigate the potential role for these factors in RA.

HX and MB designed this study; HX organized this study and was the correspondence author; JY and DH carried on this research, they collected samples, demographic data, and finished the lab job, JY also finished the statistic work; LJ, QG, SH, FC, XZ, and YL collected samples and demographic data; HX, MB, and JY wrote the paper. JY and DH contributed equally to this work.

Copyright: © 2017 Yin, He, Jiang, Cheng, Guo, Huang, Zeng, Liu, Brown and Xu. This is an open-access article distributed under the terms of the Creative Commons Attribution License (CC BY). The use, distribution or reproduction in other forums is permitted, provided the original author(s) or licensor are credited and that the original publication in this journal is cited, in accordance with accepted academic practice. No use, distribution or reproduction is permitted which does not comply with these terms.