Background: Venous malformation (VM) consists of a network of ectatic anomalous thin-walled venous channels. A role for an activating TIE2 mutation in the development of the dilated luminal vessels in VM, and its proposed involvement of embryonic stem cells (ESCs), led us to investigate the expression of ESC markers in subcutaneous VM (SCVM) and intramuscular VM (IMVM).

Methods: Formalin-fixed paraffin-embedded sections of SCVM from seven patients and IMVM samples from seven patients were analyzed for the expression of Nanog, pSTAT3, OCT4, SOX2, SALL4, and CD44, using 3,3′-diaminobenzidine (DAB) immunohistochemical (IHC) staining. All these samples did not express lymphatic marker D2-40. NanoString mRNA analysis and RT-PCR were performed on snap-frozen samples of SCVM (n = 3) and IMVM (n = 3) from the respective original cohorts of patients included in DAB IHC staining. To confirm co-expression of two proteins, immunofluorescent (IF) IHC staining on two representative samples of IMVM and SCVM samples from the original cohorts of patients included for DAB IHC staining was performed.

Results: DAB IHC staining demonstrated expression of all of the above ESC markers in both SCVM and IMVM samples. IF IHC staining showed that these markers were localized to the endothelium within these lesions and that Nanog, pSTAT3, SOX2, and CD44 were also expressed by cells outside of the endothelium. NanoString mRNA analysis confirmed transcription activation of pSTAT3, OCT4, and CD44. RT-qPCR confirmed transcription activation of Nanog, SOX2, and SALL4.

Venous malformation, which affects 1% of the population (3), is composed of ectatic anomalous venous channels, lined by flat endothelial cells (ECs) (3–5) with absent or deficient smooth muscle cells (SMCs) within the thin vessel walls (3, 5). VM is present at birth, although it may not be noticed until later in life (3–5). It grows proportionately with the child and may suddenly expand in response to hormonal changes, trauma, or incomplete excision (2–4). VM affects different topographic regions and tissues, commonly involving the subcutaneous tissues and less commonly muscle (6). Subcutaneous VM (SCVM) usually presents as a compressible bluish swelling, whereas intramuscular VM (IMVM) often presents later in life with swelling, pain, or loss of function (5). Approximately 40% of VM occur in the head and neck region, 40% in the extremities, and 20% on the trunk (3, 6).

Management of VM is generally unsatisfactory especially for extensive lesions and includes observation, elastic support (7), low-dose aspirin (7), sclerotherapy, such as ethanol sclerotherapy (8, 9), surgery, or a combination of these treatments (10–12).

The pathogenesis of VMs has not been fully elucidated (2, 13), although recent reports have demonstrated a role for mutations of TIE2-L914F (14) and PIK3CA (15) in the biology of these lesions. VMs are mostly sporadic, with 1.2% being familial (16). A mutation in the TIE-2 gene, a receptor for angiopoietin 1 (Ang-1) expressed almost exclusively on ECs, has been identified in familial (17), and in up to 50% of sporadic (18), VM cases. Activating mutations of this tyrosine kinase receptor results in a ligand-independent hyperphosphorylation (14). Vikkula et al. (19) suggest that the TIE2 mutation in ECs may reduce SMC ligand expression causing a local uncoupling between normal SMC recruitment and the proliferation of ECs.

We have recently demonstrated the expression of components of the renin–angiotensin system (RAS): prorenin receptor (PRR), angiotensin-converting enzyme (ACE), angiotensin II receptor 1 (ATIIR1), and potentially angiotensin II receptor 2 (ATIIR2), in SCVM and IMVM, which suggests a role for the RAS in the biology of VM (20). ATIIR1 is responsible for the proangiogenic effects of ATII, which may contribute to the increased density of abnormal venous channels within VM (20). The presence of ATIIR2 may indicate cellular differentiation determination, as proposed by Zambidis et al. (21). Furthermore, ACE is a marker for primitive human pluripotent stem cell-derived hemangioblasts (20). The expression of ACE on the endothelium of VM (20) and the increased expression of stem cell marker c-kit within smaller lesional vessels in blue rubber bleb nevus syndrome (22), a subtype of VM, led us to speculate whether this reflected a primitive phenotype for this endothelium of VM.

A role for TIE2 activation in the formation of increased vessel lumen in vasculature derived from embryonic stem cells (ESCs) (23) parallels the vasculature seen in VMs and led us to hypothesize the expression of a primitive population in endothelium of both SCVM and IMVM.

This study aimed to identify a putative primitive population by their expression of ESC markers, such as Nanog, pSTAT3, OCT4, SOX2, SALL4, and CD44, in SCVM and IMVM.

Previously untreated, SCVM tissue samples from seven patients and IMVM samples from seven patients with a mean age of 22.9 (range, 1.2–54) and 21.1 (range, 8–30) years, respectively, were sourced from the Gillies McIndoe Research Institute Tissue Bank and used in a study approved by the Central Health and Disability Ethics Committee (ref. no. 13/CEN/130). Written informed consent was obtained from the participants.

Hematoxylin and eosin (H&E) staining was performed on 4-μm thick formalin-fixed paraffin-embedded sections of SCVM (n = 7) and IMVM (n = 7) samples to confirm the presence of VM tissues on the slides by an anatomical pathologist (Helen D. Brasch). Negative staining for D2-40 (1:100; cat# M3619, Dako, Glostrup, Denmark) was performed in all cases at the Department of Pathology at Hutt Hospital to exclude lymphatic malformation.

The mean levels of mRNA expression for each gene investigated in SCVM vs IMVM were subjected to t-test for quality of means using SPSS v 22, to determine and significant differences. 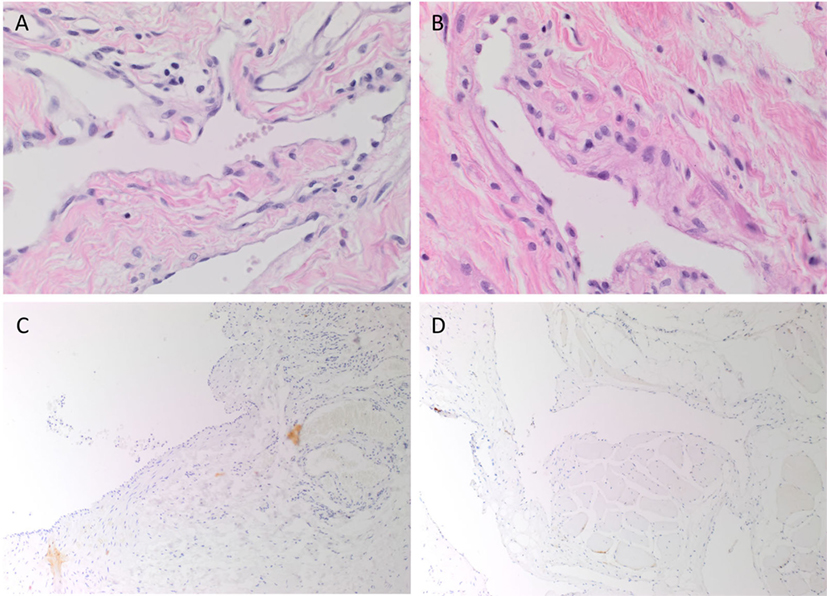 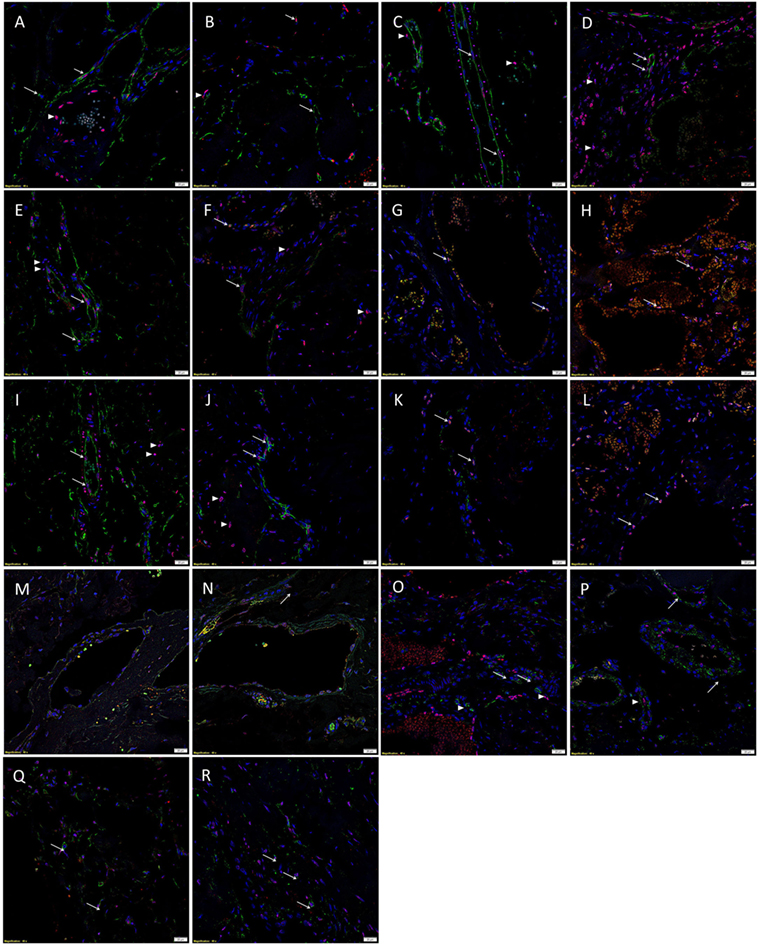 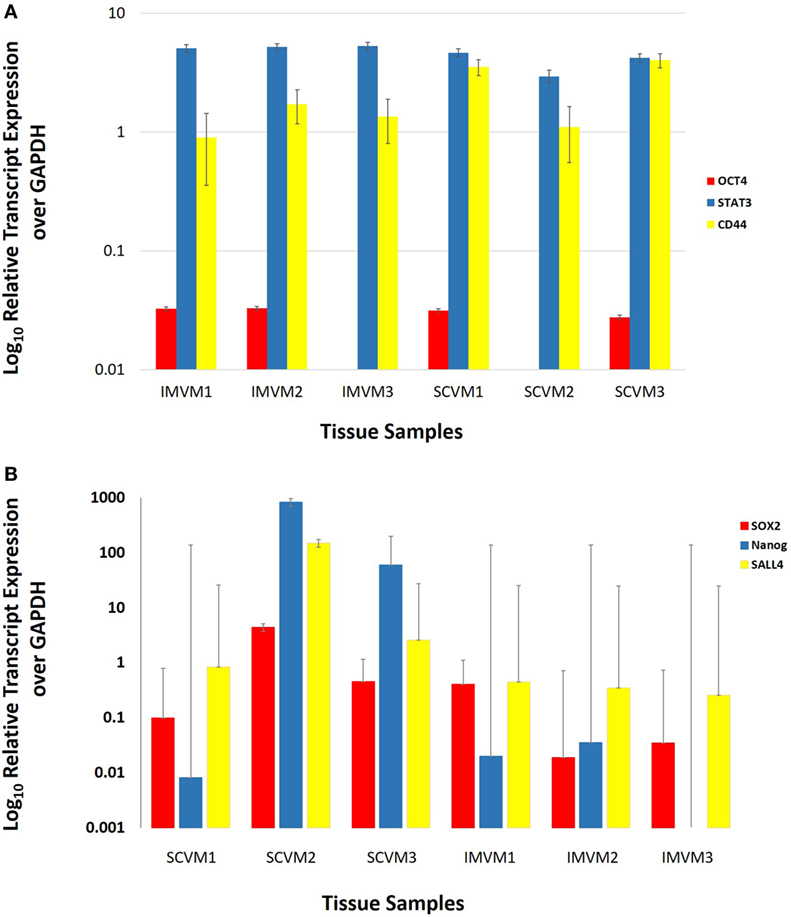 Figure 4. Log10 relative expression of OCT4, STAT3, and CD44 (A) and SOX2, Nanog, and SALL4 (B) mRNA transcripts in three subcutaneous venous malformation (SCVM) and three intramuscular venous malformation (IMVM) samples analyzed by NanoString (A) and RT-qPCR (B) analyses. Expression is depicted relative to the housekeeping gene GAPDH. OCT4 was detected in two SCVM and two IMVM samples (A). STAT3 and CD44 (A) and SOX2 and SALL4 (B) were detected in all three samples. Nanog was detected in all three SCVM samples and two out of three IMVM samples (B).

98.8% of VMs arise sporadically. Familial VM that is typically multifocal is inherited in an autosomal dominant manner (2, 3, 5, 14, 19). The activating mutations of the tyrosine kinase receptor, TIE2, in the ECs account for the familial forms and 50% of sporadic (2, 3, 13, 14) VMs. The most common mutation in familial VM is R849W that involves an arginine-to-tryptophan substitution at position 849 in the kinase domain of TIE2 (2, 5, 14, 19). The most common somatic mutation is L914F, which accounts for 77% of patients with mutation-positive VM (14).

The exact mechanism by which mutant TIE2 leads to VMs is unknown (2). The mutations that lead to VM are located in the tyrosine kinase domain, kinase-insert domain, and carboxy terminal tail domains and cause ligand-independent receptor hyperphosphorylation in vitro and increased TIE2 activity (2, 5, 14, 19). The lack of correlation between phosphorylation and strength and severity of patient phenotype suggests a role in qualitative and not just quantitative anomalies in TIE2 signaling (2). The activating TIE2 mutation in ECs may reduce SMC ligand expression causing a local uncoupling between the normal recruitment of SMCs and the proliferation of ECs, resulting in affected vessels containing a disproportionately large number of ECs compared with SMCs (19).

Studies on mutant TIE2 have shown that expression of TIE2-L914F or TIE2-R849W in HUVECs increased activation of AKT and of STAT-1, an inflammatory mediator (2, 14). Elevated AKT signaling has an antiapoptotic effect on ECs leading to increased survival, as well as reducing the production of PDGF-B, which plays a major role in recruitment of mural cell (2, 14). Increased activity of this receptor tyrosine kinase that leading to abnormal sprouting and branching, which results in VMs, has been proposed (5). Vascular endothelial protein, tyrosine phosphatase, which is more strongly expressed in vessels invested with SMC than in capillaries and small veins, has been suggested to protect arteries and large veins from increased TIE2 activity, resulting in malformed venules/veins (5).

TIE2 is expressed on ECs, hematopoietic stem cells, and proangiogenic monocytes (14). Further research has identified ligands for the TIE2 receptor—Ang-1 and angiopoietin-2 (Ang-2) (5, 14). Ang-1 and Ang-2 bind to TIE2 and mediate, respectively, vascular maturation and angiogenesis (14). The TIE2 signaling pathway, through these proteins, is critical for EC–SMC communication in venous morphogenesis and is believed to play a role in regulating the assembly of non-endothelial components of the vessel including SMCs (3, 5). Knockout of TIE2 or Ang-1 in mice results in impaired blood vessel branching and deficient perivascular coverage (14). Deletion of Ang-1 in the developing embryo produces a disorganized vascular network with an increased number of ectatic vessels (14).

This study describes an intriguing combined expression of ESC markers by the endothelium of both SCVM and IMVM lesions. Although some of these transcription factors, such as pSTAT3, may be associated with the normal hematopoiesis (28), we infer that its expression may be more related to its role in stem cell signaling (29). Furthermore, the expression of SOX2 and SALL4 are seen in both the cytoplasm and nucleus, which is supported by similar studies (30, 31), although the reasons for which are beyond the scope of this study. Interestingly, a recent report demonstrates the use of Y-27632, a Rho pathway inhibitor, for efficient culture of VM ECs (32), with the use of this cytokine previously reported to be crucial in the culture of ESCs (33).

The core nuclear transcription factors, such as Nanog, pSTAT3, and OCT4, have been used to identify and characterize the ESC population (34). OCT4 works synergistically with SOX2 and Nanog, to regulate various genes required for self-renewal and pluripotency (35, 36). The presence of leukemia inhibitory factor in pSTAT3 leads to its interaction with brachyury to form a loop stimulating the expression of Nanog (36).

Mogler et al. (22) show the presence of c-kit, a stem cell growth factor receptor, in the smaller, but not larger vessels of VM lesions. A potential explanation could be that the larger ectatic vessels are more mature and can no longer maintain a stem cell population, and the smaller vessels act as potential precursors.

Taken together, the novel findings in this report suggest a role of the ESC expression on the TIE2-activating mutation endothelium may possibly predispose to the formation VM phenotype, although this remains the topic of further investigation.

We have recently demonstrated the expression of PRR, a component of the RAS, on the endothelium of both SCVM and IMVM (20). PRR is known to signal through the Wnt/β-catenin pathway (37), and subsequently maintain pluripotency in ESCs (38). The finding of the two ESC-like subpopulations within SCVM and IMVM is novel and suggests that these primitive subpopulations may be a therapeutic target. Work is underway to investigate if these primitive subpopulations expressing the RAS, which can be manipulated by existing medications.

1. Larger studies are needed to confirm the significance of the findings in this study of a relatively small sample size.

2. In vitro and in vivo functional studies are needed to determine the ESC-like phenotype of these cells and relative role in the patho-etiology of VM.

This study was carried out with the approval of the Central Health and Disability Ethics Committee (ref. no. 13/CEN/130) with written informed consent from all subjects in accordance with the Declaration of Helsinki.

TI and ST are inventors of the patent application Treatment of Vascular Anomalies (62/287657), 2016. The authors otherwise declare that the research was conducted in the absence of any commercial or financial relationships that could be construed as a potential conflict of interest.

The authors thank Ms. Liz Jones of the Gillies McIndoe Research Institute for her assistance in IHC staining. SS was supported by a summer scholarship from the Deane Endowment Trust.

The Supplementary Material for this article can be found online at https://www.frontiersin.org/article/10.3389/fmed.2017.00162/full#supplementary-material.

Copyright: © 2017 Tan, Siljee, Brasch, Enriquez, Tan and Itinteang. This is an open-access article distributed under the terms of the Creative Commons Attribution License (CC BY). The use, distribution or reproduction in other forums is permitted, provided the original author(s) or licensor are credited and that the original publication in this journal is cited, in accordance with accepted academic practice. No use, distribution or reproduction is permitted which does not comply with these terms.