Malignant melanoma is among the most common types of cancer, with an increasing incidence rate of 7.9 per 100,000 people in 1975 to 25.8 per 100,000 people in 2015 (1). Approximately 7% of patients are diagnosed with stage III disease, who have a 5 year survival rate was 60.8% (2). The treatment approach for stage III patients is crucial because cutaneous melanoma often metastasizes first to the regional lymph nodes and the sentinel lymph node (SLN) is the first lymph node to receive lymphatic drainage from the primary site. The surgical approach for treating regional lymph node metastasis has continued to develop, particularly considering sentinel lymph node biopsy (SLNB). Although most patients with melanoma have no clinical nodal disease at the first visit, some patients have clinically undetectable micrometastasis in the regional lymph node. The main controversy is whether completion lymph node dissection (CLND) improves the overall or disease-specific survival of patients with SLN micrometastasis. Furthermore, the advent of promising systemic therapies, confirmed in recent clinical trials, and the results of several trials, confirming the efficacy of SLNB and immediate CLND in patients with positive SLN, may drastically change the conventional methods used for surgical control of the regional lymph nodes by using CLND for all patients with a positive SLNB.

SLNB is the most appropriate technique for accurate staging of clinical stage I and II disease. The main risk variables associated with higher SLN metastasis are Breslow thickness (BT), ulceration, and a number of mitoses. Per the 8th edition cancer staging guidelines recommended by the American Joint Committee on Cancer (AJCC) (3), SLNB is generally not recommended for melanoma patients with a BT of <0.8 mm without ulceration because the probability of a positive SLN is <5%. However, SLNB should generally be considered for melanoma patients with clinical stage IB or II disease, with the following considerations:

1. T1b (BT of <0.8 mm with ulceration or BT of 0.8 mm−1 mm with or without ulceration) or T1a lesions with BT <0.8 mm with other adverse features [e.g., very high mitotic index ≤ 2/mm2 (particularly in young patients), lymphovascular invasion, or a combination of these factors], because the probability of a positive SLN is 5–10%. SLNB should be considered for these patients after discussion.

2. Stage IB (T2a) or II (BT of >1 mm with any feature), because the probability of a positive SLN is >10%. SLNB should be offered SLNB for these patients after discussion.

No globally accepted protocols are available for processing SLNs. However, small metastases are overlooked in conventional processing, which involves the examination of a single routine hematoxylin-eosin (HE)-stained section obtained by bivalving the SLN along the long axis (4, 5). In another procedure, the SLN is sectioned serially along the short axis (breadloaf technique) to increase the amount of subcapsular tissue in the HE-stained sections (6). When routine H&E staining does not reveal SLN metastases, immunohistochemistry (IHC) for S100, HMB-45, and MART-1/Melan-A is useful for detecting additional SLN-positive patients (7, 8). Reverse transcription-polymerase chain reaction (RT-PCR) and cell culture can increase the detection rates of positive SLN even when there are only a few metastatic melanoma cells in the SLN (9); however, these molecular biology techniques are not widely used in most institutions.

Management of Patients With Positive SLN: Results of Recent Studies and the Role of SLNB

When patients show positive results for SLN metastasis, CLND has traditionally been indicated. However, the findings of recent studies regarding the therapeutic value of SLNB and immediate CLND after positive SLNB have resulted in a change in this traditional strategy.

MSLT–II enrolled a large number of patients with positive SLN (9). This was also a multicenter, phase III randomized trial that compared the immediate CLND group (n = 824) with the observation group (n = 931; patients underwent CLND only when regional metastasis was suspected on ultrasonography performed every 4 months). The mean 3 year melanoma-specific survival rate was statistically insignificant between the two groups after a median follow-up of 43 months. The disease-free survival (DFS) was slightly significantly better in the CLND group than in the observation group (P = 0.05). A positive non-SLN status was a reliable, independent prognostic factor for recurrence [hazard ratio (HR), 1.78; P = 0.005]. The occurrence of post-operative lymphedema was higher in the CLND group (24.1%) than in the observation group (6.3%). Likewise, the authors concluded that immediate CLND was not associated with improved melanoma-specific survival, but improved the regional recurrence rate and provided prognostic information.

The above-mentioned two randomized trials demonstrated no survival benefit even if patients received immediate CLND after positive SLNB, although the nodal recurrence rate decreased in the immediate CLND group. The results of these trials do not recommend routine CLND in most patients after positive SLNB. However, their conclusions are still limited, as most patients in these studies had lower tumor burdens in the SLN (>60%). Those populations have a low probability of positive non-SLN in both groups. The true efficacy of immediate CLND after positive SLNB in patients with a higher risk, with SLN tumor burdens of >1 mm, is still unknown because of the small sample size in these trials. Therefore, current NCCN guidelines still recommend CLND, along with careful observation in patients with positive SLN after appropriate risk stratification (11). Accordingly, some guides, such as nomograms, should be utilized for accurate prediction of non-SLN status, regional control, and prognosis. This will enable us to conduct clinical trials for confirming the survival advantage of CLND in a more homogenous cohort with positive non-SLNs. Previously published predictive models for positive non-SLNs (12–18) are shown in Table 1. Although several studies have suggested similar clinicopathological characteristics as predictive parameters, a recent study by Bertolli et al. proposes BT, the number of positive SLNs, and large tumor diameter as significant predictive parameters, using their nomogram (18). This model shows the best discriminatory power (AUC 0.752) and Brier score (0.085) among all published predictive models (18) (Table 1). 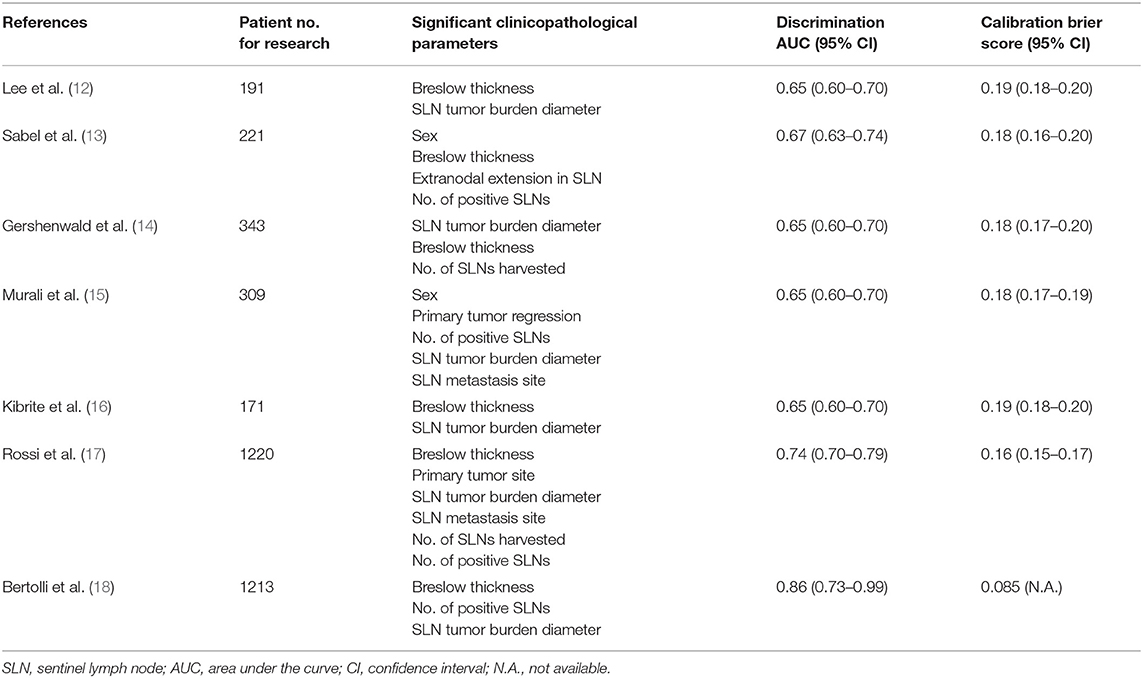 The racial difference in the proportion of clinical type is also crucial for considering the role of SLNB and immediate CLND. For example, acral melanoma (AM) shows drastic differences from other clinical types considering the biological, genetic, and clinicopathological aspects, although SLNB is also widely applied in clinical practice. The actual role of SLNB in this cohort remains unclear, as limited number of AM patients were included in the large trials of SLNB (i.e., DeCOG-SLT and MSLT-II) that mainly investigated Caucasian people (9, 10, 19). Ito et al. retrospectively investigated Japanese AM patients (n = 116) who received SLNB (20). Positive SLN was associated with significantly shorter melanoma-specific survival and DFS. The impact of positive SLNs on melanoma-specific survival was increased in AM patients with >1 mm thickness (5 year survival, 22.7 vs. 80.8%; P = 0.0005). Although the sample size was small in these studies, the trends of positive SLN status in association with more frequent recurrence and worsened survival in AM patients were similar to those trends in larger prospective randomized trials; however, there are no data regarding the efficacy of immediate CLND compared with observation.

The recent development of novel agents, including immune checkpoint inhibitors (ICIs) and molecular target agents, and their approval in many countries worldwide changed the treatment strategy for not only disease in the advanced stage but also treatment in the post-operative adjuvant setting. All these clinical trials mainly included stage III patients who underwent CLND and no patients skipped CLND after positive SLNB.

The clinical benefits of two anti-PD-1 agents as adjuvant therapy were reported recently. A phase III randomized controlled trial (Checkmate 238) comparing nivolumab with ipilimumab for stage IIIB to IV melanoma patients (22) demonstrated better 1 year RFS with lower toxicity in the nivolumab group than in the ipilimumab group. Likewise, a phase III randomized trial (KEYNOTE-054) comparing pembrolizumab with placebo for stage III patients, except for <1 mm of tumor burden in the SLN, also demonstrated improvement in the recurrence-free survival of patients receiving pembrolizumab compared to those receiving placebo after a median follow-up of 15 months (HR, 0.57; P < 0.001) (23).

The result of SLNB can be used to classify patients without clinical nodal disease for undergoing adjuvant therapy. However, all the above-mentioned clinical trials required CLND before initiating adjuvant therapy. Conversely, in the real-world setting, patients who have positive SLN and do not undergo CLND will increase considering the results of the DeCOG-SLT and MSLT-II trials, even if the patients' tumor burdens exceed 1 mm. Currently, there are no data about the survival benefit of adjuvant therapy with the novel agents in patients who skipped CLND after positive SLNB. Therefore, further research is required to investigate the survival differences between the clinical trial populations and the more heterogeneous real-world population.

The reports of modern neoadjuvant clinical trials using ICIs or molecular targeted agents demonstrate promising efficacy, mainly for clinical stage III disease. All agents for neoadjuvant use have not yet been approved worldwide.

These novel neoadjuvant therapies, involving active regimens mainly for clinical stage III melanoma, showed high pathological RRs. Remarkably, no patients achieving pCR after treatment with ICIs developed recurrence during the follow-up periods. However, these esults must be interpreted with caution as these trials did not report OS after long-termfollow-up.

Immunohistological and molecular characteristics of SLNs may be useful in predicting the development of regional or distant metastasis, because the SLN represents the immunological site at which anti-tumor immune dysfunction is established and where potential prognostic immunologic markers can be found. Considering the immunologic microenvironment, the number of CD3+, CD4+, and CD8+ tumor-infiltrating lymphocytes in positive SLN is associated with better recurrence-free survival and OS (32). Elevated levels of regulatory T cell markers, such as FOXP3 and indoleamine 2,3-dioxygenase, correlate with increasing rates of local, regional, and distant metastases (33, 34). A study focused on regression of the primary tumor indicated that a regression of more than 10% was a reliable cutoff to divide different risk categories (35). Only a small number of CD4+/CD25+, FOXP3+/CD4+, or PD1+/CD4+ lymphocytes infiltrated the regressed areas. These lymphocytes were correlated with anergy and lower CD8+ lymphocyte immune response to melanoma cells. Thus, these findings may help in developing novel therapeutic strategies for selecting SLNB and immediate CLND for patients with stage III melanoma. As for molecular characteristics, Vallacchi et al. reported a pilot study involving integrated analysis of genome-wide transcriptional profiles and in vitro assessment of immune cells present in positive SLNs. This analysis identified microRNA, involved in the regulation of the TNF receptor superfamily member 8 gene that encodes the CD30 receptor, as a marker in the lymphocytes of melanoma patients with progressive disease. These findings demonstrate that microRNA is associated with the regulation of immune dysfunction in SLNs, providing a valuable prognostic molecular marker for identifying stage III melanoma patients at risk of recurrence.

The future of SLNB and CLND will depend on the development of promising neoadjuvant/adjuvant therapies and excellent biomarkers, which may drastically change the treatment strategies for stage III melanoma patients as well as the current TNM classification. This may lead to the advent of a new era in which surgical procedures would not be required for high-risk patients, including those with stage III disease.

YN had full access to all of the data in the study and take responsibility for study concept and design, acquisition, analysis, interpretation of data, drafting of the manuscript, and critical revision of the manuscript for important intellectual content.

This research was supported by Japan Agency for Medical Research and Development (AMED) under Grant Number JP19ck0106508h0001.

Copyright © 2019 Nakamura. This is an open-access article distributed under the terms of the Creative Commons Attribution License (CC BY). The use, distribution or reproduction in other forums is permitted, provided the original author(s) and the copyright owner(s) are credited and that the original publication in this journal is cited, in accordance with accepted academic practice. No use, distribution or reproduction is permitted which does not comply with these terms.