Maternal, Fetal, and Placental Selectins in Women With Pre-eclampsia; Association With the Renin-Angiotensin-System

Pre-eclampsia is a pregnancy-specific syndrome characterized by de novo hypertension and proteinuria after 20 weeks gestation (1). It affects between 2 and 8% of all pregnancies and is a major cause of both maternal and perinatal morbidity and mortality worldwide (2, 3). The consequences of pre-eclampsia are not restricted to pregnancy, with both mothers and their offspring being at increased in risk of cardiovascular, metabolic and renal disease in later life (4, 5). The etiology of pre-eclampsia remains unknown, but endothelial dysfunction due to abnormal placentation, oxidative stress, extensive leucocyte activation and inappropriate activation of the renin-angiotensin system (RAS) appear to be key contributors (6–10). The endothelium is the main regulator of vascular homeostasis. In addition to contributing to vasodilation, the intact endothelium also has anti-aggregatory, anti-inflammatory and anti-proliferative properties (11). Hypertension is associated with endothelial dysfunction, which in turn results from a dysregulation of locally-acting mediators, such as the vasodilators nitric oxide, and prostacyclin and the vasoconstrictor endothelin, and angiotensin II (Ang II)

The RAS is an important regulator of blood pressure and is one of the first hormonal systems to recognize pregnancy (10). Moreover, the RAS also plays a role in various pathological situations involving regulation of cell proliferation, inflammation, oxidative stress, and angiogenesis (12, 13). We have previously demonstrated a disrupted placental RAS in pre-eclampsia with the angiotensin II type 1 receptor (AT1R), activation of which results in vasoconstriction, being more highly expressed in placenta from women with pre-eclampsia (14).

Selectins are type 1 transmembrane proteins and are involved in leucocyte trafficking, mediating the initial tethering and rolling interactions between blood and lymphatic organs via the endothelium (15). Selectins were so named because of their ability to selectively bind carbohydrate moieties via their ligand P-selectin glycoprotein ligand-1 (PSGL-1) (15). There are three types of selectins, endothelial E-, platelets P- and leucocyte L-selectins; CD62E, CD62P and CD62L, respectively. All 3 selectins are composed of common extracellular domains and are distinguished from one another by their variable number of consensus repeats and very different cytoplasmic tails (16). E-selectin is normally absent from resting endothelium, but is transcriptionally induced in venules of multiple organs by inflammatory mediators, such as tumor necrosis factor (TNF) and IL-1 (17). P-selectin is constitutively synthesized in both platelets and endothelial cells and stored in Weibel-Palade bodies. They are rapidly translocated to the surface upon stimulation with inflammatory mediators, such as thrombin, histamine, and platelet-activating factor (17).

The shortest selectin molecule, present in leukocytes, is L-selectin, which, in the microvasculature, facilitates neutrophil rolling and migration during inflammatory responses (18). Elevated sE-selectin levels may be indicative of endothelial cell activation and damage. In addition to the conventional roles described above, the selectins play an essential role in human implantation; L-selectin and its ligands participate in the adhesion of the blastocyst to the endometrium at the maternal-fetal interface (19). Moreover, P- and E-selectins are also involved in immune recognition between maternal decidua and the embedded embryo, as well as trophoblast migration within decidual spiral arterioles (19). Reduced expression of all selectins has been reported in both decidual cells in uterine decidual stroma and in the placenta (cytotrophoblasts and syncytiotrophoblasts) of early miscarriages (6–11 weeks) compared to controls (terminations for social reasons) (20).

Concentrations of both soluble (s) E- and P-selectins have been reported to be increased in patients with chronic hypertension with the most severe endothelial dysfunction (21). Previous studies have reported elevated maternal plasma sE-selectin concentrations in women with pre-eclampsia, both at the time of delivery (22–26) and also prior to clinical diagnosis (22). However, the available data concerning both sP- and sL-selectins (22, 23, 26, 27) are conflicting.

Associations between the RAS and the selectins have previously been reported: Ang II is a potent stimulus to angiogenesis, both directly and by supplying angiogenic factors by platelet aggregation (28) and inducing the expression of P-selectin on platelets, while lessening its expression in endothelial cells (29). In addition, platelets express AT1R on their surface, and AT1R antagonists reduce P-selectin expression in platelets (30) and inhibit P-selectin-mediated platelet adhesion to the microvessels (31). Ang II also acts directly on naive T cells inducing upregulation of L-selectin via the AT1R (32). Finally, Ang II treatment significantly increased E-selectin mRNA expression in vascular endothelial cells collected from lung tissues in a mouse model of pulmonary metastasis (33).

The study population consisted of 17 normotensive control women and 17 women with pre-eclampsia, collected over a period of 18 months (Table 1). Nottingham University Hospital Ethics Committee approved the investigations and written informed consent to participation was obtained from each woman. Cases were defined on admission with a clinical diagnosis of pre-eclampsia, defined as a systolic blood pressure of ≥ 140 mm Hg and diastolic pressure (Korotkoff V) of ≥ 90 mm Hg on 2 occasions after 20 weeks' gestation in a previously normotensive women and proteinuria > 300 mg/L, 500 mg/day or 2+ on dipstick analysis of midstream urine (MSU) if 24-h collection result was not available (1). Although samples were collected under the criteria defined originally (1), they still fit the recently updated definition (34). For subgroup analysis, the pre-eclampsia group was further split by early- (diagnosis ≤ 34 weeks) and late- (diagnosis >34 weeks) onset pre-eclampsia (35). Medical and obstetric histories, including delivery data, were obtained for each woman. The birthweight centile for each baby was computed, correcting for gestation age, sex, maternal parity, and body mass index (BMI) (36). Venous blood samples were collected before delivery and umbilical venous (fetal) blood were collected immediately after and processed as previously described (6); samples were stored in aliquots at −80oC until analysis. In addition, placental tissue samples were collected from a standardized location midway between cord insertion and placental border and processed for immunohistochemistry as previously described (6). 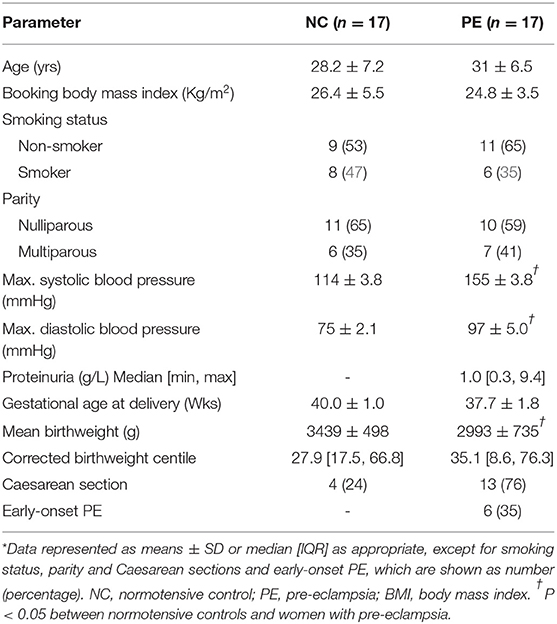 All tests were performed using SPSS version 24. Summary data are presented as means ± standard deviation (SD) or median and interquartile range (IQR) as appropriate. The Kolmogorov-Smirnov test indicated the experimental data were not normally-distributed. The Kruskal-Wallis test followed by Mann-Whitney U-test was used for multiple group analysis; the Wilcoxon paired tests were used for maternal and fetal selectin concentrations. Potential associations between continuous data were tested using Spearman's Rho correlation tests. The null hypothesis was rejected where P < 0.05.

Demographics and clinical characteristics of the participants are summarized in Table 1. By definition, blood pressures were significantly increased (P < 0.05) and significant proteinuria was present in the pre-eclampsia group. Birthweights were also lower in the women who suffered from pre-eclampsia. The groups were matched for maternal age, BMI, smoking status, parity, and gestational age at delivery.

Concentrations of all soluble selectins are summarised in Figure 1. Maternal sE-selectin was increased in pre-eclampsia compared to controls (P < 0.05; Figure 1A). No significant differences were observed for sP- or sL-selectins (P > 0.05 for both; Figures 1B,C). In contrast, in the fetus, both sE- and sP-selectin concentrations were lower in the pre-eclampsia group (P < 0.05 for both; Figures 1A,B), but did not differ for sL-selectin (P > 0.05; Figure 1C). 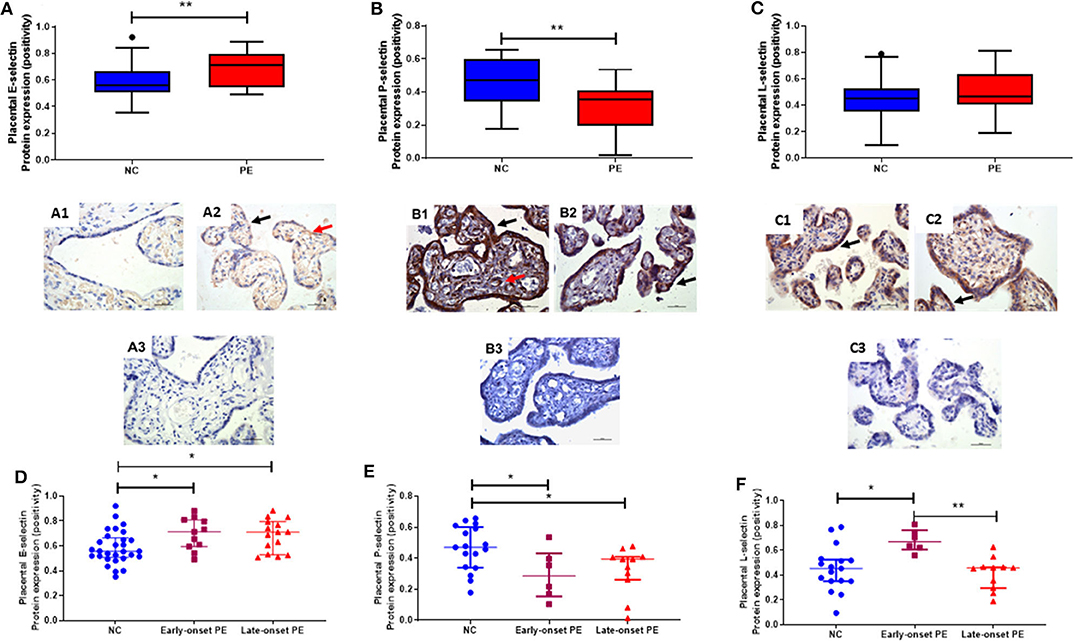 Association of Placental Expression of Selectins With AT1R and AT2R

This is the first study to present data on all selectins in paired maternal/fetal plasma together with their placental expression in women with and without pre-eclampsia. It helps clarify the conflicting data found previously in relation to P- and L-selectin in pregnancy and pre-eclampsia.

The interesting finding of reduced fetal sE-selectin in pre-eclampsia could either be a protective adaptation to limit the endothelial damage to the fetus, or reflects an underlying inability to synthesize E-selectin. Since E-selectin can be induced on fetal endothelial cells to the same extent as adult vessels by 32 weeks' gestation (17, 41) and the gestational age of the early-onset PE group was nearer 34 weeks, this supports the view that the difference is attributable to the pre-eclampsia pathology and not an immaturity of development. sE-selectin also contributes to homing in the endothelial progenitor cells and promotes tube formation in microvasculature as a repair mechanism (42). Given that there is reduced tubule formation in HUVECS isolated from pre-eclamptic pregnancies (43), this further suggests that the functional capacity of fetal endothelial cells is impaired in pre-eclampsia.

Nevertheless, the positive correlation with placental AT2R expression only in the pre-eclamptic samples supports the hypothesis of a protective mechanism; AT2R forms part of the “protective” arm of the RAS and is strongly upregulated following tissue damage such a vascular and neuronal injury (44). AT2R confers this role through its anti-inflammatory, anti-fibrotic and anti-apoptotic properties. Moreover, in lung tissues, which have many parallels with the placenta, Ang II treatment significantly increased E-selectin mRNA expression in vascular endothelial cells, further supporting the association (33).

We did not identify any differences in maternal sP-selectin between groups, which is in contrast to a previous study, which reported increased levels in pre-eclampsia (23, 26). A potential explanation for this difference lies in the later gestation age at sampling in our study when compared to the previous study. The lack of differences in sP-selectins between groups could have been due to our not measuring platelet sP-selectin levels. Nevertheless, by using whole plasma, we were able to measure all 3 selectins.

Inspection of Figures 2A,B led us to suggest that the ratio between maternal and fetal sE- or sP-selectin might differ between normotensive and pre-eclamptic women, and in early and late-onset pre-eclampsia. As Figure 3 shows, this is indeed the case, again emphasizing a possible protective mechanism.

The lack of differences observed between groups in sL-selectin in plasma may be because differences are only seen in specific cell types, for example the decreased levels in pre-eclampsia reported in neutrophils, T-cells, and monocytes (46). However, although not significant, there did appear to be a trend toward reduced maternal sL-selectin concentrations in the early-onset pre-eclamptic group. This is in line with previous studies where the majority of the pre-eclamptic samples measured were from early-onset pre-eclampsia (23, 47). To investigate this fully, future studies will examine whether any differences are observed when leukocytes and platelets are isolated and analyzed to confirm if the differences in this study are confirmed, or were masked by measuring in whole plasma. In contrast, there is increased placental expression in placenta from the early-onset pre-eclampsia group, which is not reflected in parallel increases in the maternal or fetal circulation. This again suggests a possible protective mechanism, further supported by the positive association seen with placental AT2R expression in the pre-eclamptic group. It has been suggested that these lower levels result in increased leukocyte activation as seen in some chronic inflammatory states (e.g., chronic artery disease (48)). We can thus speculate that the increased placental L-selectin in early-onset pre-eclampsia could lead to increased leucocyte activation and therefore atherosis in these placenta.

The studies involving human participants were reviewed and approved by Nottingham University Hospital Ethics Committee. The patients/participants provided their written informed consent to participate in this study.

We thanks Heidi Jamin and Beatrice Rohrbach for running the ELISA assays and all the women who participated in the study. This work was supported by the British Heart Foundation Basic Science Intermediate Basic Science Fellowship [FS/15/32/31604 to HM]. Some parts of the data, in an adapted form from this manuscript has been published as a conference paper (49).

1. Brown MA, Lindheimer MD, de Swiet M, Van Assche A, Moutquin JM. The classification and diagnosis of the hypertensive disorders of pregnancy: statement from the International Society for the Study of Hypertension in Pregnancy (ISSHP). Hypertens Pregnancy. (2001) 20:IX-XIV. doi: 10.3109/10641950109152635

45. Tayeh MA, Scicli AG. Angiotensin II and bradykinin regulate the expression of P-selectin on the surface of endothelial cells in culture. Proc Assoc Am Physicians. (1998) 110:412–21.

Copyright © 2020 Mistry, Ogalde, Broughton Pipkin, Escher and Kurlak. This is an open-access article distributed under the terms of the Creative Commons Attribution License (CC BY). The use, distribution or reproduction in other forums is permitted, provided the original author(s) and the copyright owner(s) are credited and that the original publication in this journal is cited, in accordance with accepted academic practice. No use, distribution or reproduction is permitted which does not comply with these terms.