Acquired perforating dermatosis (APD) is a penetrating skin disease characterized by the excretion of denatured collagen from the epidermis. The most common clinical symptom of APD is pruritus. The lesions are distributed widely and characterized by umbilicated papules and plaques with central crusted ulceration (1). The histopathological presentation of APD often shows local epidermal erosion and loss, homogenized denaturation of dermal superficial fibers, and denaturated fiber bundles penetrating the epidermis (2, 3). MASSON's trichrome and elastic fiber stain showed collagen fibers penetrating the epidermis in the dermis. APD is a rare disorder and the clinical presentation can vary from patient to patient, and it is difficult to differentiate clinically from prurigo nodularis, solar dermatitis, or other diseases. The real diagnosis is often missed or delayed.

Dermoscopy is a non-invasive technique that is used to aid the diagnosis of skin tumors and other inflammatory dermatoses (4, 5) In our clinical work, we found the APD is characteristic under dermoscopy. To the best of our knowledge, the dermoscopic features of APD have been described in three previous case reports (6–8). Here we analyze and report the dermoscopic feature in a series of 39 patients with APD.

We identified 39 patients (19 male and 20 female) with a diagnosis of APD in our department over the past 4 years. The age of these patients ranged from 18 to 65 years, the average age was 48.5 years. All of the patients were diagnosed by clinical (Figure 1) and histopathological examination (Figure 2).

Figure 1. The clinical presentation of an APD patient. Skin lesions were widely distributed all over the trunk and limbs, the main manifestations were keratinized purplish-red papules or ulcers, about rice to bean size. The center of most papules was navel concave, the surface was a yellow adhesive exfoliated scab shell surrounded by a purplish-red halo. The edge of the ulcer was levee shaped and palpated with moderate hardness. 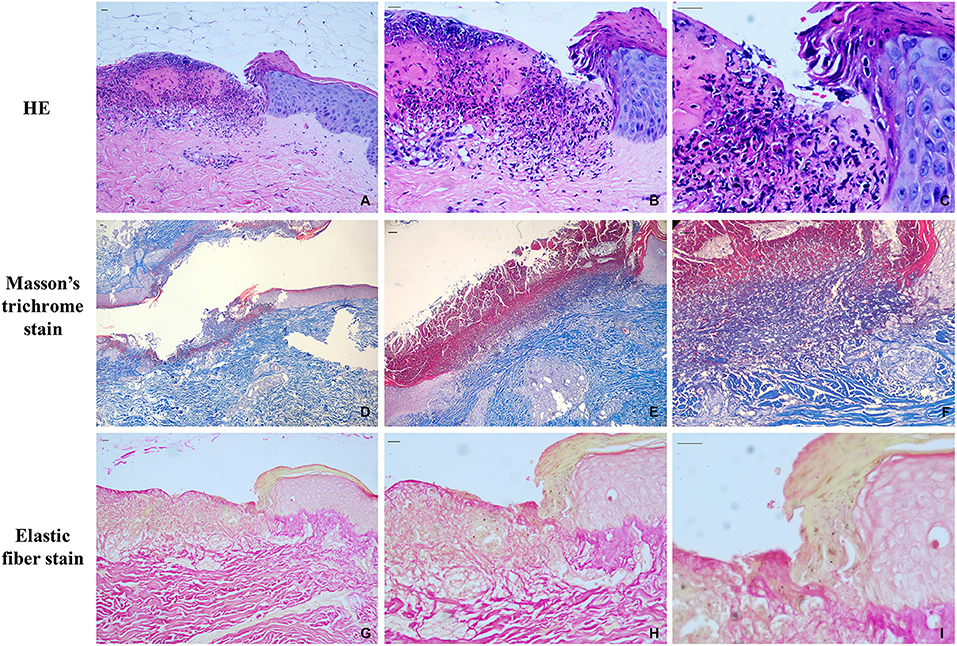 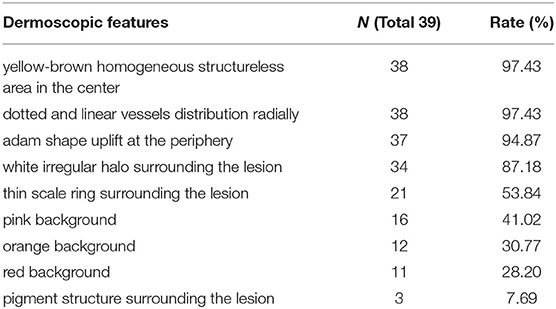 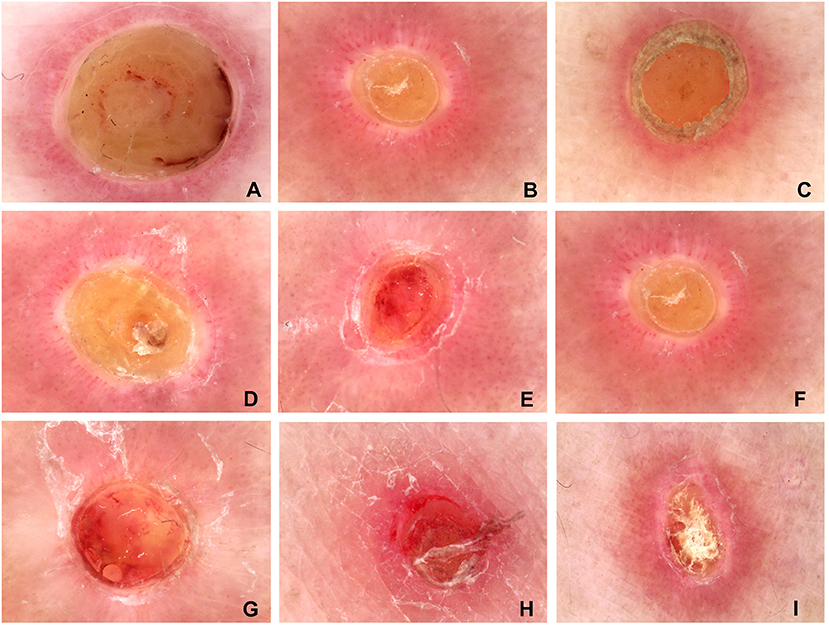 The original contributions generated for this study are included in the article/Supplementary Material, further inquiries can be directed to the corresponding author/s.

Human research was approved by the Ethics Committee of Chengdu Second People's Hospital. The authors certify that they have obtained all appropriate patient consent forms and patients provided consent, confirming that their clinical information could be reported in journal articles.

Copyright © 2021 Wang, Liao, Fu, Kan, Peng and Lu. This is an open-access article distributed under the terms of the Creative Commons Attribution License (CC BY). The use, distribution or reproduction in other forums is permitted, provided the original author(s) and the copyright owner(s) are credited and that the original publication in this journal is cited, in accordance with accepted academic practice. No use, distribution or reproduction is permitted which does not comply with these terms.

Progress and Prospects on Skin Imaging Technology, Teledermatology and Artificial Intelligence in Dermatology