Aim: The aim of this study was to investigate the changes in anterior segment parameters as assessed by ultrasound biomicroscopy (UBM) after laser peripheral iridotomy (LPI) and to propose a prediction equation for the width of the angle after LPI.

Design: This was a prospective study.

Methods: Anterior segment UBM parameters were measured, whereas AOD750 was chosen to indicate the width of the angle associated with gonioscopic angle closure, as found in a prior study.

Conclusions: There was an increase in angle opening and iris flattening after LPI. An equation involving four angle parameters was constructed, this equation which could explained 42.7% of the variability in the angle opening indicator AOD750 after LPI whereas in the plateau iris configuration subgroup, the accuracy of the prediction equation reached a maximum of 68.6%.

The incidence of angle-closure glaucoma is between 1.1% and 1.6% in China. By 2050, the total incidence of glaucoma in China may reach 3.48% (1). The prevalence of primary angle-closure suspect (PACS) is significantly higher than that of primary angle-closure (PAC) or primary angle-closure glaucoma (PACG) (2). Laser peripheral iridotomy (LPI) is an option for the treatment of PACS because it can establish a channel, relieve the pupil block component, and flatten the iris plane, thus increasing the width of the anterior chamber angle (3, 4). However, the effect of LPI on the induction of angle opening is not consistent, and the actual role of LPI is still controversial. Twenty percent of PACS patients still had iridotrabecular contact after LPI treatment (3). A previous study found that for every 0.1 mm decrease in the angle opening distance at 750 μm from the scleral spur (AOD750), the odds of developing gonioscopic angle closure increased by a factor of 3.27 (5). To predict the post-procedural effect of LPI, it is necessary to establish a prediction equation for the degree of angle opening after LPI based on the morphological structure of the eye.

All tests and treatments were carried out at the Zhongshan Ophthalmic Clinical Research Center, a tertiary hospital in Guangzhou, China. The experiment was approved by the Ethical Committee of Zhongshan Ophthalmic Center. The experiment was carried out according to the principles of the Declaration of Helsinki. From September 2019 to September 2020, patients diagnosed with PACS who underwent LPI were enrolled. All the participants provided written informed consent. The inclusion criteria were as follows: (1) PACS was diagnosed according to International Society for Geographical and Epidemiological Ophthalmology (ISGEO) definition, in which patients with narrow angles that ≥6h clock hours circumstances pigmented trabecular meshwork was not visible under non-indentation gonioscopy); (2) no peripheral anterior iris synechiae were found on gonioscopic examination; (3) intraocular pressure (IOP) ≤ 21 mmHg; and (4) no abnormalities were found on fundus examination. The exclusion criteria included serious general health problems, previous intraocular surgery, previous iridoplasty, and inability to undergo LPI due to the opacity of the media.

All patients underwent routine ophthalmic examinations, including the Humphrey visual field examination, IOP examination, slit-lamp examination, gonioscopy, and UBM examination. An experienced ophthalmologist performed gonioscopy in a dark room with a slit lamp. The Scheie method was used to classify the angle.

Two senior glaucoma experts, associate chief physician Zuo Chengguo and attending physician Gao Xinbo, divided PACS patients into pupillary block type, a plateau iris configuration, and a mixed mechanism type according to their UBM images before LPI. If the two glaucoma doctors disagreed on a patient's classification, a third senior glaucoma expert, chief physician Lin Mingkai, made the final judgement. We distinguished the mechanism of angle closure according to the following definitions (10):

2. Plateau iris configuration: the iris profile is flat, and the iris root is shifted forward as a result of anterior positioning of the ciliary processes, making the iridocorneal angle narrow and the anterior chamber deep.

One of the glaucoma specialists treated this cohort using a VISULAS® 532s diode laser (Carl Zeiss Meditec, Inc.) Two percent pilocarpine eye drops were used for pretreatment. LPI was performed at the thinnest part of the iris (at the 10–12 o'clock and 12–2 o'clock positions). The signs of full-thickness perforation were the forward movement of aqueous matter from the posterior chamber to the anterior chamber and the dispersion of pigment. The diameter of the perforation was approximately 200 μm. Immediately after surgery, all eyes were immediately treated with prednisolone and at least one drug to lower intraocular pressure. All patients were given 1% prednisolone six times on the day of LPI and six times a day for the next week. Two to three weeks after LPI, we obtained and evaluated UBM images. Figure 1 illustrated the three types of angle-closure mechanisms before and after LPI. 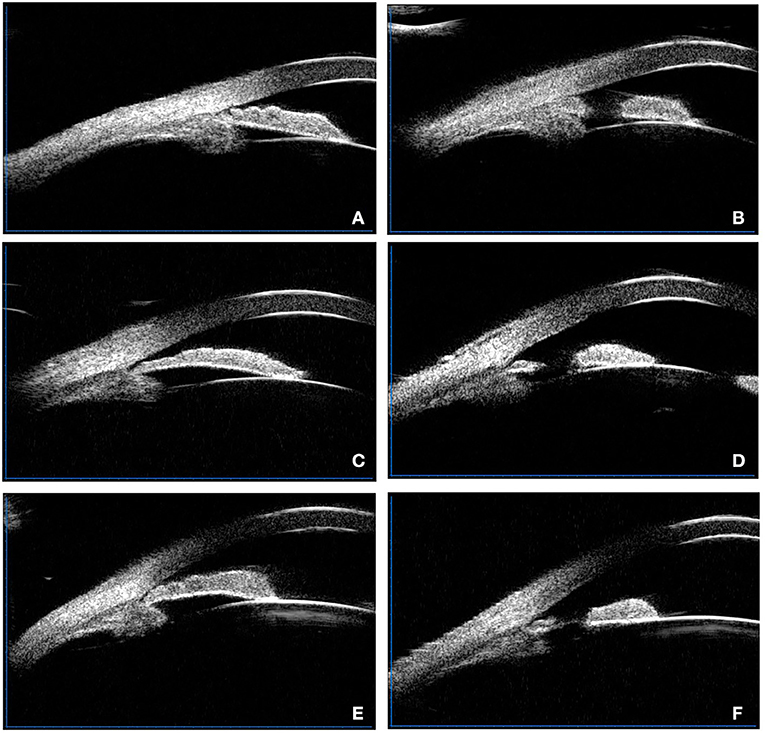 A technician performed ultrasound biomicroscopy (SW-3200L, Suoer, Tianjin) before and after LPI. When the subjects gazed at the calibration object with the opposite eye, we obtained four-quadrant angle structure images and one central anterior chamber image. From 12 o'clock, the eyeballs of all patients were examined clockwise (the visual angle was kept at approximately 20 degrees, and the control was adjusted). After topical anesthesia, the probe was placed perpendicular to the ocular surface, and normal saline was used as the coupling agent. The gain was set between 60 and 80 dB to maximize the field of view of the imaging structure and minimize “noise”. We attempted to ensure that the scleral spur, the angle, the ciliary body, and half the iris chord length were clearly visible. 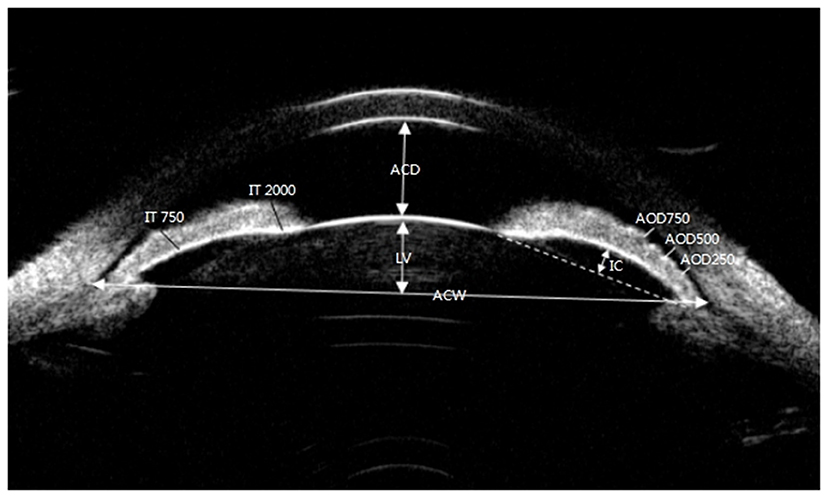 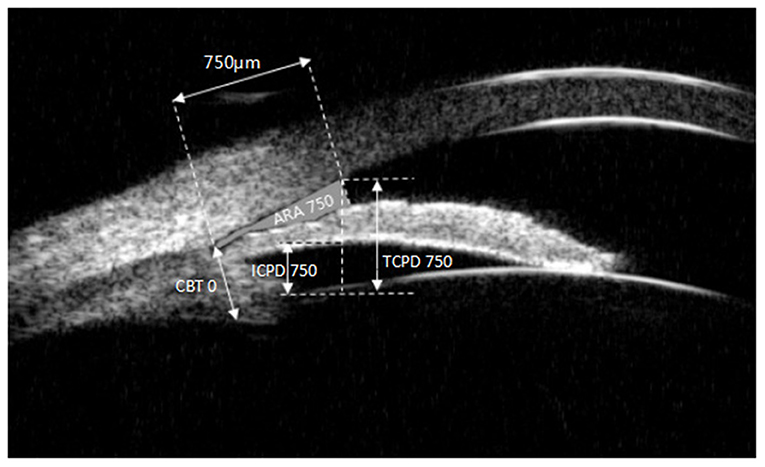 SPSS software (IBM SPSS Statistics 23.0) was used for statistical analysis. Data with a normal distribution are reported as the means ± SDs. The paired t-test was used to compare the differences in UBM parameters before and after LPI. The AOD750 after LPI and baseline parameters AOD750, angle opening distance at 500 μm from the scleral spur (AOD500), AOD750, angle recess area at 750 μm from the scleral spur (ARA750), ACD, LV, IT750, IT2000, IC, CBT0, TCPD750, and ICPD750 were analyzed by univariable and multiple linear regression analysis. P <0.05 was considered statistically significant.

Demographics and Baseline Clinical Characteristics of the Study Population 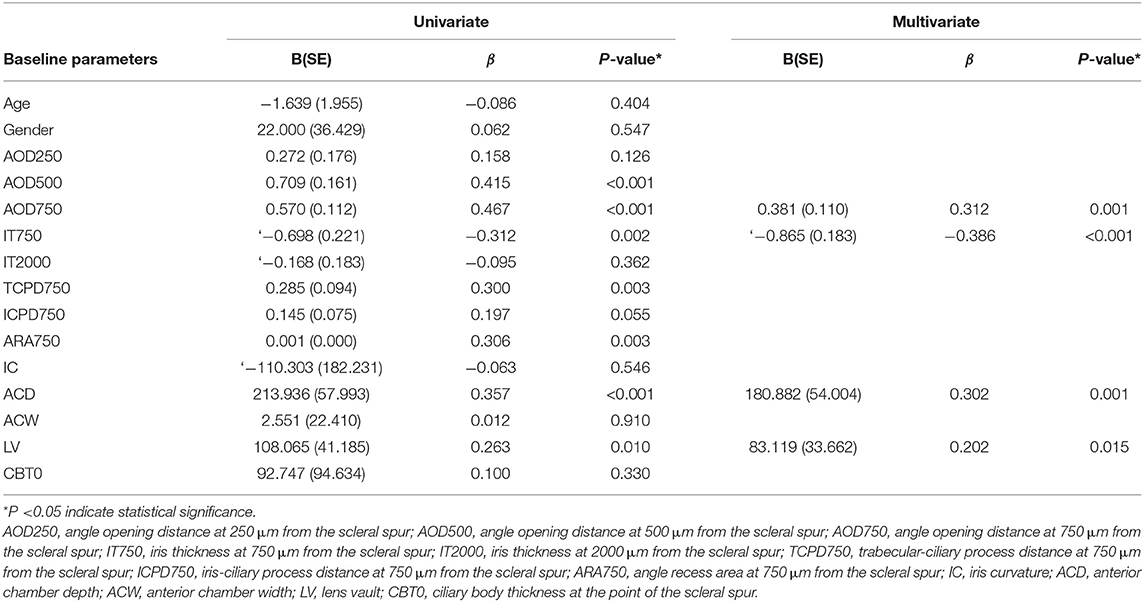 The predictive equation was thus generated as follows: 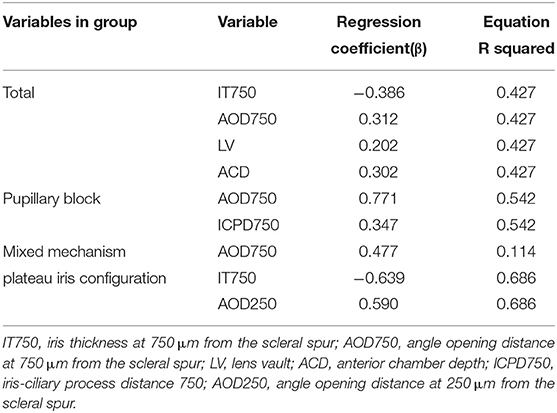 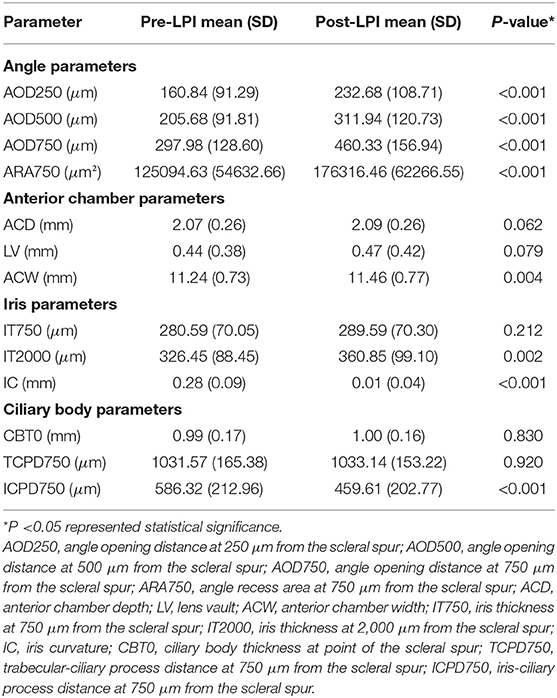 Table 4. Changes in mean anterior segment parameters before and after laser peripheral iridotomy.

In a recent study, He (11) noted that patients identified through community-based screening faced no immediate threat to their vision, and so widespread prophylactic laser peripheral iridotomy was not recommended. However, we speculated that patients identified through hospital-based screening might have different results. AOD750 was found to be associated with gonioscopic angle closure; therefore, we proposed a formula to predict the variability in AOD750 after LPI.

In contrast to previous studies based on anterior-segment -OCT, our study included ciliary body parameters such as TCPD and ICPD by using UBM. Linear regression analyses determined that greater baseline TCPD750 predicted higher odds of AOD750 after LPI (P <0.05). Our study included four baseline parameters in the final equation, which enabled superior accuracy.

In the multivariable analysis equation, the larger the baseline ACD, LV, and AOD750 before the operation, the wider the angle was after LPI, which may be due to the larger anterior chamber depth and the narrower distance between the trabecular meshwork and the ciliary body at baseline, which allows the angle to become flatter after LPI, thus leading to greater angle opening.

In addition, among the subgroups with different angle-closure mechanisms, we found that the prediction equation for the plateau iris configuration subgroup was the most accurate, followed by the pupillary block subgroup and the mixed mechanism subgroup. LPI may have a limited ability to induce angle opening in patients with a plateau iris configuration. The AOD750 after LPI depended only on the size of AOD250 and IT750 at baseline. Recent studies have suggested that LPI alone has a limited therapeutic effect on patients with plateau iris configuration and may need to be combined with laser peripheral iridoplasty (LPIP), which is consistent with our findings (10, 13).

In this study, 100 patients with PACS were observed. It was found that the anterior chamber angle was widened, the ACD was deepened, the IC was decreased and the distance between the iris and the ciliary body was significantly shortened after LPI in a Guangzhou population with PACS, which is consistent with previous research results (14–17). The angle opening distance was related to the baseline ACD, IT750, AOD750, and LV before LPI. In the pupillary block subgroup, there was a significant correlation between the angle opening distance after LPI and the baseline IC, which is consistent with previous studies. Previous studies have suggested that greater baseline IC is associated with a higher likelihood of angle widening (8, 16).

The limitations of this study are as follows. Although AOD750 was used as the standard in this study, the magnitude of AOD750 does not directly define the quality of LPI. Second, two different senior doctors performed the gonioscopy, and, as in other studies, there must inevitably exist some inter-observer variability due to the subjective nature of gonioscopy. Third, our equation was based on univariable and multivariable linear regression equations. However, some baseline parameters may have no linear correlation with the AOD or percentage change in mean AOD after LPI. This may have caused us to miss some important baseline predictors. We will conduct further prospective studies to verify the reproducibility and accuracy of the proposed equation. Finally, non-standardized UBM gain parameters may affect the accuracy, reproducibility and further analysis of the results.

In conclusion, our study found that AOD750 was correlated with baseline ACD, IT750, AOD750 and LV, and we could predict the post-procedural AOD angle according to the structural parameters of the pre-procedural angle. Our findings could serve as a valuable reference to inform clinical work.

The studies involving human participants were reviewed and approved by Ethical Committee of Zhongshan Ophthalmic Center. Written informed consent for participation was not required for this study in accordance with the national legislation and the institutional requirements.

Copyright © 2021 Gao, Zhou, Zuo, Chen, Ren, Lin, Liao, Gong, Hu and Lin. This is an open-access article distributed under the terms of the Creative Commons Attribution License (CC BY). The use, distribution or reproduction in other forums is permitted, provided the original author(s) and the copyright owner(s) are credited and that the original publication in this journal is cited, in accordance with accepted academic practice. No use, distribution or reproduction is permitted which does not comply with these terms.