Subacute thyroiditis is an inflammatory thyroid disorder associated with viral infections. The disease is most prevalent in females. First symptoms usually appear a couple of weeks after an acute symptomatic or asymptomatic viral infection. Clinical presentation may include general signs of infection, front-neck pain, and thyroid dysfunction (1).

Next to several viruses that have been reported as possible causative agents in thyroiditis, the occurrence of subacute thyroiditis has also been described following influenza or Hepatitis B vaccination (2–8). Recently, cases of subacute thyroiditis following SARS-CoV-2 vaccination with CoronaVac (Sinovac Life Sciences, China), Comirnaty (BioNTech, Fosun Pharma, Pfizer, Germany, and USA) and Vaxzevria (AstraZeneca; Sweden) have also been described (5, 9–12).

A 26-year-old female patient presented in our thyroid outpatient department with distinctive worsening cervical pain that radiated to both ears. She further complained about fever and chills 2 weeks earlier over 2 days after receiving the first dose of vaccination with Vaxzevria (AstraZeneca, Sweden). She did not report any past medical history for thyroid diseases or recent upper respiratory tract infections. She did not have any family history of thyroid diseases. 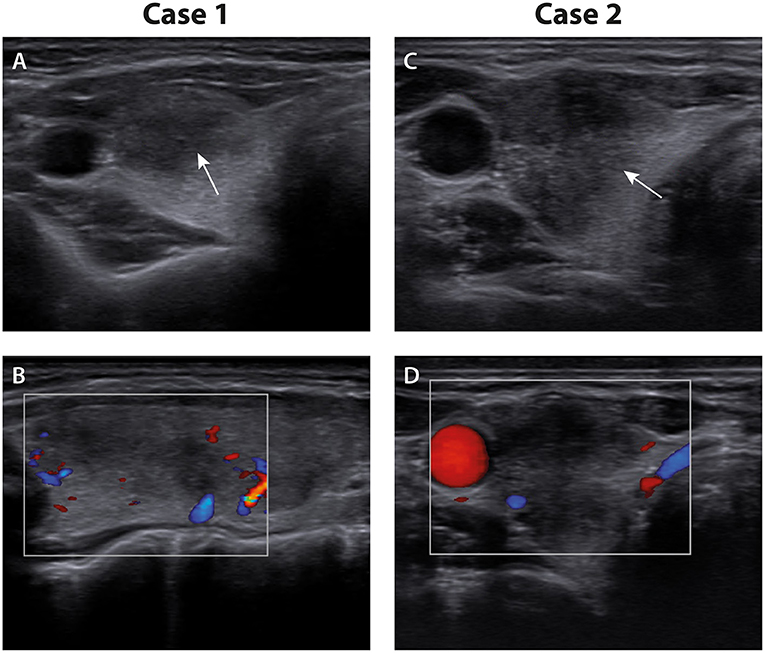 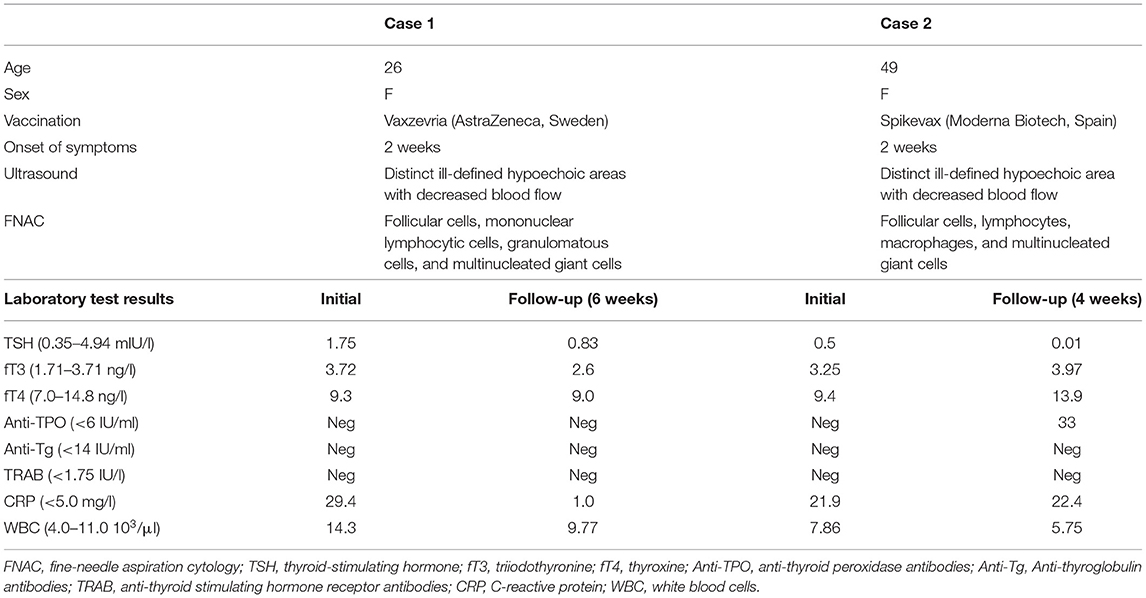 Therefore, the diagnosis of subacute thyroiditis was made and the initial treatment effort was an oral medication with ibuprofen 600 mg. Due to a lack of symptomatic improvement the medication was changed to prednisolone 50 mg/d. The patient's symptoms completely resolved within 2 weeks and fT3, CRP and WBC became normal at follow-up. Corticosteroid therapy was gradually tapered. The 6-week follow-up showed full recovery with no clinical residues.

A 49-year-old female presented with a 3-week history of sore throat after having received her first dose of the Moderna mRNA vaccine 1 month before. Initially, the symptoms were characterized by headaches and difficulty in concentrating. One week later, she experienced a right cervical sore throat with radiation to the ear. She presented to her primary care physician, who performed an ultrasound on the neck and detected, in addition to thyroid nodules in the left lobe, a newly appeared, large, hypoechoic, and indistinct structure in the right lobe of the thyroid gland. Furthermore, the patient was seen by an otolaryngologist, which revealed no findings other than the sonographic abnormality in the thyroid gland. Therefore, the patient was presented to our thyroid outpatient clinic for further diagnostics and clarification of a possible fast-growing malignant nodule.

The patient did not have any past medical history for autoimmune thyroid diseases or recent upper respiratory tract infections. Family history included benign thyroid nodules on the paternal side. The patient's medication consists of a birth control pill and Gynokadin (estrogen for hormone replacement therapy).

Results pointed to a subacute thyroiditis. However, the patient asked for further clarification of the hypoechoic area in the right thyroid lobe. In order to exclude malignancy and to prove the diagnosis of subacute thyroiditis, fine-needle aspiration cytology was performed and showed lymphocytic infiltrates, macrophages, and multinucleated giant cells consistent with subacute thyroiditis.

The patient received symptomatic therapy with 600 mg ibuprofen daily. Due to gastrointestinal intolerance, the patient's private practitioner changed the medication to diclofenac 50 mg/d, and symptoms improved after 2 weeks. However, the patient discontinued the treatment on her own authority after another week and at the 4-week follow-up, thyroid function test showed thyrotoxicosis and positive anti-thyroid peroxidase antibodies and symptoms worsened again. Therefore, the medication was changed to prednisolone 20 mg/d. Her symptoms disappeared within a couple of days. The patient is still being followed-up on treatment with prednisolone during tapering.

Several viruses have been reported as possible agents in subacute thyroiditis including adenovirus, enterovirus, influenza virus, cytomegalovirus, rubella virus, Epstein Barr virus, Coxsackie virus, and measles virus (4). Furthermore, some cases of subacute thyroiditis following SARS-CoV-2 infection have also been published so far (14). It is assumed that angiotensin-converting enzyme 2 and transmembrane protease serine 2 that allow SARS-CoV-2 to infiltrate human cells might also play a crucial role in the development of subacute thyroiditis as these receptors are highly expressed in follicular cells (15–17).

Overall, further data are needed in order to study the association between subacute thyroiditis and SARS-CoV-2 vaccinations or other virus disease vaccinations.

Based on the presented cases and data on other cases reported in the literature, subacute thyroiditis should be considered as a possible side effect in all cases that present with thyroid pain following a SARS-CoV-2 vaccination.

Written informed consent was obtained from the patients for the publication of any potentially identifiable images or data included in this article. The case report was approved by the local ethics committee.

We acknowledge support by the Open Access Publication Funds of the Georg-August-University Göttingen University.

Copyright © 2021 Bornemann, Woyk and Bouter. This is an open-access article distributed under the terms of the Creative Commons Attribution License (CC BY). The use, distribution or reproduction in other forums is permitted, provided the original author(s) and the copyright owner(s) are credited and that the original publication in this journal is cited, in accordance with accepted academic practice. No use, distribution or reproduction is permitted which does not comply with these terms.