Objective: To evaluate the clinical utility of a Chinese scoring system for hepatitis B liver failure in a prospective and multicenter study.

Methods: Clinical data for 1,143 patients with hepatitis B liver failure who had been followed up for a minimum of 6 months were collected from seven liver disease centers across China. The disease severity and prognosis for the patients were predicted using the Chinese scoring system and compared to those predicted with the model for end-stage liver disease (MELD) score, MELD-Na score, and Child-Turcotte-Pugh (CTP) score.

Conclusion: The Chinese scoring system demonstrated superior performance to the three established scoring systems in assessing the severity and outcomes of hepatitis B liver failure in this cohort.

Liver failure is a severe complication in which the liver fails to perform basic functions due to severe or massive liver injury, which also disrupts the vital functions of other organs and systems. It typically manifests as jaundice, hepatic encephalopathy, and coagulopathy (1, 2). The mortality rate of liver failure may be as high as 70% (3). Hepatologists must be able to assess and predict the outcomes of liver failure accurately and early in patients, especially to determine if and when liver transplantation is required. Dynamic changes in the conditions of a patient should also be closely monitored and followed, as timely prevention and treatment of complications significantly impact the clinical outcomes. The models for end-stage liver disease (MELD), MELD-Na, and Child-Turcotte-Pugh (CTP) scores are three established systems used to numerally grade the severity of liver failure in patients, which can reveal the probability for favorable or non-favorable outcomes (4, 5). All three model systems were established by assessing patients with liver failure mainly caused by hepatitis C virus (HCV) infection and alcoholic liver disease. However, liver failure caused by hepatitis B virus (HBV) infection is characterized by acute onset, severe liver injury, and high mortality, with distinct pathogenesis and clinical characteristics from those caused by HCV and alcohol. The three model systems can be expanded or modified to better grade HBV liver failure. We previously established a new scoring system known as the Chinese scoring system and its performance and utility were evaluated for patients with hepatitis B liver failure in a retrospective study (6–9). To further investigate the utility of this new scoring system in grading the severity of hepatitis B liver failure and predicting outcomes, we conducted this prospective study at seven liver disease centers across China.

Between October 2013 and June 2016, a total of 1,143 chronic hepatitis B inpatients with liver failure (acute-on-chronic liver failure, ACLF) were enrolled from seven liver disease centers. Among them, 936 were men, 207 were women, and the average age was 43.4 ± 12.6 (ranged from 18 to 65). The patients were followed up for >6 months, during which 464 died and 680 survived. This study was registered in the Clinical Trials Registry (registration number: NCT01961440, https://clinicaltrials.gov/).

HBV-related ACLF diagnosis for all patients followed the criteria established by the 18th Asia-Pacific Association of Liver Research consensus on chronic-acute liver failure (10). The criteria include a history of chronic hepatitis B and an acute flare-up of liver injury with clinical manifestations of jaundice (total bilirubin ≥ 85 μmol/l) and coagulation disorder (prothrombin time international standardized ratio ≥ 1.5), ascites, and/or hepatic encephalopathy within 4 weeks.

This score was calculated using the scoring standards for five indexes, i.e., grade of hepatic encephalopathy, ascites, total bilirubin, albumin, and prolonged prothrombin time. A score of 1, 2, or 3 was assigned to each index to reflect the severity of each condition, and the CTP score was the sum of the five indexes (8).

(1) All numeral data were expressed as mean ± SD (±s) and the difference was computed using the f-test. (2) The count data were expressed as a percentage (%), and the difference was assessed with the χ2 test. (3) Assessments of the short-term and long-term prognoses for patients with hepatitis B liver failure using the Chinese scoring system, MELD score, MELD-Na score, and CTP score were compared using receiver operating characteristic (ROC) curves and the ROC area under the curve (AUC). AUC > 0.7 was deemed to be of clinical utility and >0.8 to be of good prediction accuracy. The AUC values were compared using normal Z-tests and the ROC curve sensitivity and specificity were used to determine the best cut-off values for the score and the Youden's index. SPSS l8.0 statistical software (IBM SPSS Inc., Chicago, USA) was used for all analyses. P <0.05 was considered statistically significant. 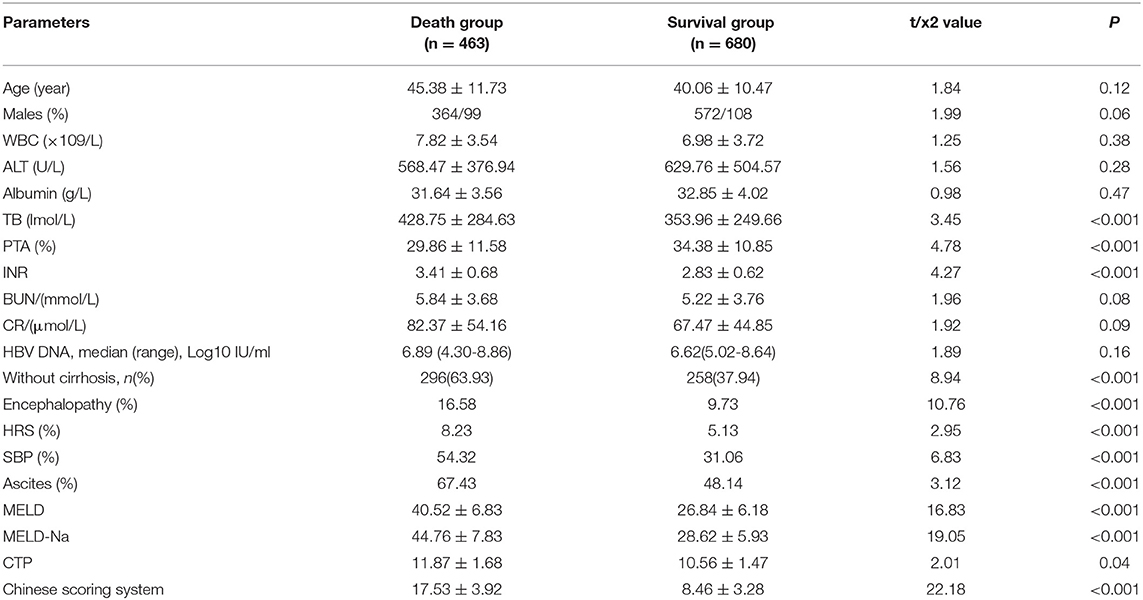 Figure 1. The cutoff value and distribution range for the Chinese scoring system to separate the patients that survived from those that did not.

Figure 2. The cutoff value and distribution range for the MELD score to separate the patients that survived from those that did not. MELD, model for end-stage liver disease.

Table 3. Comparison of the performance to grade the severity at the peak disease by Chinese scoring system and MELD scoring system.

Table 4. The ability to predict and differentiate disease outcomes at different times with different scoring systems. 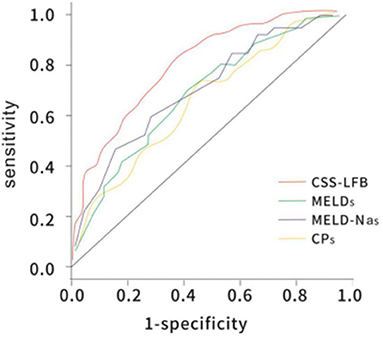 Table 5. Comparison of the area under the ROC curve of predicting short-term (30 days) prognosis of patients with hepatitis B liver failure among Chinese scoring system, MELD score, MELD-Na scoring, and CTP scoring.

Table 6. Comparison of the area under the ROC curve of predicting long-term (180 days) prognosis of patients with hepatitis B liver failure among Chinese scoring system, MELD score, MELD-Na scoring, and CTP scoring.

Child-Turcotte-Pugh (CTP) score has been widely employed in managing patients with liver diseases because of its simplicity and ease of calculation. However, it is often hindered by a lack of consistency as CTP is mainly based on albumin level and prothrombin time, both of which can be masked if exogenous albumin and plasma products are infused. In addition, hepatic encephalopathy and ascites measurement can be subjective and variable. CTP only consists of three grades with a narrow score range of 5–15, which limits the ability to differentiate. Patients with the same score may differ greatly in the severity of the liver disease.

Although the MELD and MELD-Na scoring systems are recognized as easy to use, reproducible, and accurate in clinical applications, they bear an inherent limitation because they only include bilirubin, coagulation function, renal function, and etiology, while excluding the complications of liver failure (infection, hemorrhage, hepatic encephalopathy, brain edema, or ascites). The Na concentration in the MELD-Na scoring system can be easily affected by insufficient intake, diuretics, or sodium pump failure (12, 16–20). A study conducted in China (21) showed that the AUC of MELD and MELD-Na scores for the 12-week outcomes of patients with hepatitis B-related liver failure was only 0.731, 0.735, and 0.773, respectively, and the sensitivity was below 0.7.

Massive or submassive liver injury following a flare-up of HBV replication or HBV reactivation compromises synthetic, metabolic, and detoxification functions in the liver, leading to reduced albumin levels and ascites, hyperbilirubinemia, decreased PTA, increased international standard ratio of prothrombin (INR), and hepatic encephalopathy. In addition, a severely injured liver may also hurt Kupffer cell function and reduce complement levels that may limit the anti-infective capacity. The accumulation of toxins and a decrease in renal blood flow may facilitate hyperbilirubinemia, renal function insufficiency, or even renal failure. In theory, the severity of liver failure among different individuals can be indicated by biomarkers that reflect critical alterations in the pathophysiology of liver failure. Thus, we formulated this new scoring system to improve severity grading and outcome prediction. A total of seven clinical indicators of hepatitis B liver failure are included in the Chinese scoring system, consisting of not only objective indicators such as Cr, total bilirubin, PTA, and liver size but also the complications of hepatic encephalopathy, ascites with pleural effusion, and pulmonary infection, which reflect the pathophysiological changes resulting from hepatitis B liver failure. The score boundary point was confirmed using the interactive chi-squared test, guided by the principle that emphasizes simplicity and clarity. Each index is graded between 0 and 4 points, allowing a high degree of differentiation that increases prediction accuracy. This new scoring system utilizes common clinical indicators, which can be routinely ordered to allow easy and wide applications.

The studies involving human participants were reviewed and approved by Clinical Trials registry (registration number: NCT01961440, https://clinicaltrials.gov/). The patients/participants provided their written informed consent to participate in this study.

Copyright © 2021 Zhe-bin, Bing-liang, Liang, Zhi, Xin-xin, De-ming, Wan-hua, Kai, Xue-bin, Wei-min, Yu-bao and Zhi-liang. This is an open-access article distributed under the terms of the Creative Commons Attribution License (CC BY). The use, distribution or reproduction in other forums is permitted, provided the original author(s) and the copyright owner(s) are credited and that the original publication in this journal is cited, in accordance with accepted academic practice. No use, distribution or reproduction is permitted which does not comply with these terms.