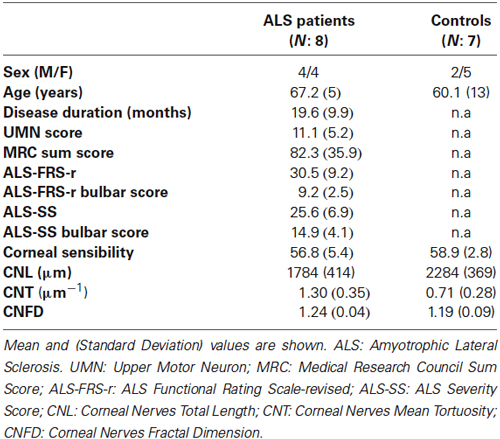 Patients were examined with an in vivo laser CCM (Heidelberg Retina Tomograph II with Rostock Cornea Module; Heidelberg Engineering GmbH, Heidelberg, Germany) and the sub-basal nerve plexus was imaged, as previously described (Gemignani et al., 2010) and shown in detail by Tavakoli (Tavakoli and Malik, 2011). A minimum of six images of the sub-epithelial plexus in each eye were randomly selected; the examiner (GF) was masked with respect to the diagnosis. Images were then automatically processed using a previously published algorithm, providing the identification of the nerves and their branching (Scarpa et al., 2008). The following corneal nerve parameters were computed: total length (CNL, i.e., the total length of corneal nerves), fractal dimension using the box-counting approach (CNFD, i.e., quantification of the nerve structure complexity) and mean tortuosity (CNT, i.e., estimate of the straying of the shape of the corneal nerves from a smooth line) (Grisan et al., 2008).

Between group differences were assessed with the Mann-Whitney test. In ALS patients, correlation between clinical and CCM data was investigated with Spearman’s rank correlation (r). Statistical significance was considered at p < 0.05. All tests were performed using SPSS software (Technologies, Inc., Chicago, IL, USA). 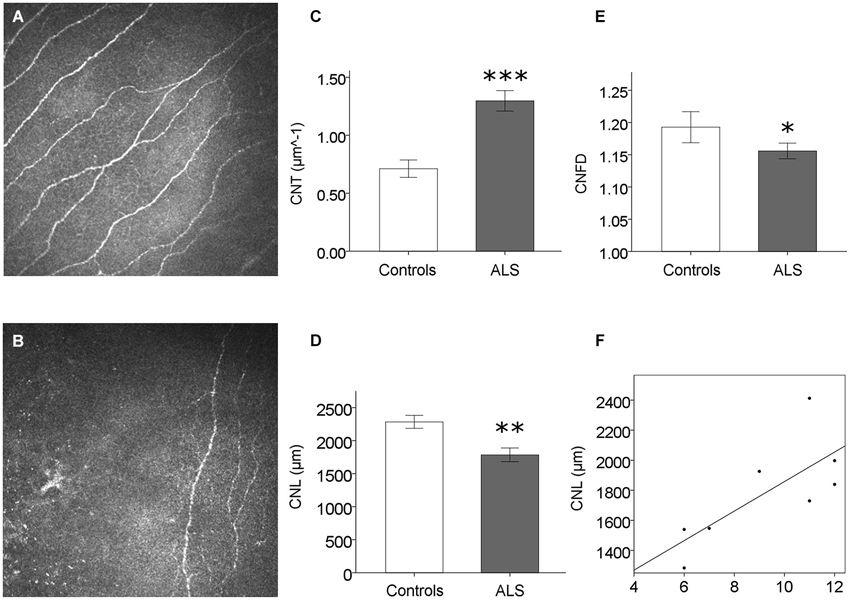 Interestingly, the hypothesis that FOSMN syndrome represents an unusual ALS phenotype has been recently proposed (Dalla Bella et al., 2014). Facial-onset sensory and motor neuronopathy hallmarks are the development of sensory symptoms within the face followed by evolution of sensory deficits and signs of LMN degeneration of bulbar and upper limb muscles, such as fasciculations, cramps, muscle weakness and wasting. The hypothesis of a neurodegenerative pathogenesis has also been proposed (Vucic et al., 2012). However, the notion that FOSMN syndrome represents an unusual ALS phenotype is still object of debate (Vucic, 2014). Although no CNN systematic studies have been performed in FOSMN yet, we speculate that our findings may further suggest a link between this rare condition and sporadic ALS.

Our results also show that in ALS patients corneal nerve fiber damage was significantly correlated with bulbar district disability scores, but not with age, UMN or LMN involvement, disease duration or spinal disability. This finding may be correctly viewed in the light of the recent model of neurodegeneration in ALS as a focally advancing process (Ravits et al., 2007).

Although studies on larger cohorts are needed to define corneal small fiber sensory neuropathy in different stages of disease or subgroup of patients, this study confirms subclinical sensory neuron (trigeminal) involvement in sporadic ALS, contributing to the understanding of the pathomechanisms of this disease.

We thank Mrs Maria Antonietta Premoli for improving the use of English in the manuscript.

Copyright © 2014 Ferrari, Grisan, Scarpa, Fazio, Comola, Quattrini, Comi, Rama and Riva. This is an open-access article distributed under the terms of the Creative Commons Attribution License (CC BY). The use, distribution and reproduction in other forums is permitted, provided the original author(s) or licensor are credited and that the original publication in this journal is cited, in accordance with accepted academic practice. No use, distribution or reproduction is permitted which does not comply with these terms.