Background: Slowing of the electroencephalogram (EEG) is frequent in Parkinson’s (PD) and Alzheimer’s disease (AD) and correlates with cognitive decline. As overlap pathology plays a role in the pathogenesis of dementia, it is likely that demented patients in PD show similar physiological alterations as in AD.

Conclusion: Increase of theta power in the left temporal region and a reduction of median frequency were associated with presence of AD or PD. PD patients are characterized by a pronounced slowing as compared to AD patients. Therefore, in both disorders EEG slowing might be a useful biomarker for beginning cognitive decline.

Mild cognitive impairment (MCI) is a prodromal syndrome of neurodegenerative dementia without significant impairment in activities of daily living (ADL); however, it is unspecific as it can be caused by various pathologies (Winblad et al., 2004), and a considerable part of MCI patients remain stable or improve over time (Ritchie et al., 2001). Diagnostic criteria for MCI due to Parkinson’s disease (PD-MCI) and Alzheimer’s disease (AD-MCI) were established (Albert et al., 2011; Litvan et al., 2012). The progression rate in PD-MCI to PD dementia (PDD) is approximately 60% over 4 years (Janvin et al., 2006); the rate of conversion to AD in MCI patients varies depending on study design and definition of MCI, though maximally one to two fifths of MCI patients with amnestic impairments at baseline progress to dementia within 2–3 years of follow-up (Schmidtke and Hermeneit, 2008; Duara et al., 2011). However, novel treatment strategies require initiation of treatment at the earliest possible time (Panza et al., 2012), and, therefore, the corroboration of the diagnosis and the identification of the cause of MCI is very important.

Quantitative electroencephalography (qEEG) has increasingly been used to characterize cognitive impairment in different disorders (Fonseca et al., 2009; Roh et al., 2011). The eyes closed resting state qEEG of patients suffering from dementia due to AD is characterized by a shift to lower frequencies (Penttilä et al., 1985; Duffy et al., 1995; Bennys et al., 2001; Czigler et al., 2008). The same observation is reported in PD patients with cognitive decline (Caviness et al., 2007; Fonseca et al., 2009; Bousleiman et al., 2014). In contrast to AD, slowing of electroencephalogram (EEG) can already be found in de novo PD patients without any cognitive deficits (Stoffers et al., 2007). Comparison of AD and PDD patients with a similar degree of overt dementia showed more pronounced EEG slowing in PDD (Babiloni et al., 2011; Fonseca et al., 2013). However, it is unknown whether qEEG measures reliably discriminate between the two diseases at the beginning of the dementing process or whether they simply correlate with the extent of cognitive decline. Thus, the present study aims at characterizing qEEG parameters in PD-MCI and AD-MCI.

Twenty patients with PD and cognitive decline (see Table 1) were recruited from the outpatient clinic for movement disorders of the University Hospital of Basel. PD was diagnosed according to UK Parkinson’s disease brain bank criteria. The diagnosis of PD-MCI (N = 15) was based on Litvan et al. (2012). Diagnosis of “probable PDD” (N = 5) was made according to Emre et al. (2007), p. 007. All PD patients were treated with dopaminergic drugs [median levodopa-equivalent dose (LED) = 829 mg; range 188–3044 mg].

Twenty normal controls (NC) were matched to both patient groups according to gender, age, and education (Table 1). Inclusion criteria were a subjective report of good health and a neuropsychological examination within normal limits. Exclusion criteria were a past and/or current diagnosis of any major brain disorder, alcoholism, psychiatric disorder, general anesthesia within the last 3 months and cognitive problems. To compare global cognitive function between both patient groups, we chose a combination of the MMSE and the clock drawing test (CDT) (Thalmann et al., 2002). The study protocol was approved by the local ethics committee. Written informed consent was provided by all participants.

Patients were examined with a comprehensive battery of neuropsychological tests [see Hatz et al. (2013) for details]. Raw scores of tests were transformed into demographically (age, gender, and education) adjusted z-scores (Berres et al., 2000). Cognitive performance was judged to be impaired when z-scores were less than −1.28, i.e., below the 10th percentile.

Electroencephalogram was recorded with a 256-channel EEG System (Netstation 300, EGI, Inc., Eugene, OR 97403, USA; DC-amplifier; sampling rate: 1000 Hz; high-pass filter: 0.01 Hz; vertex-reference, impedance ≤40 kΩ). They were instructed to relax, but to stay awake and to minimize eye and body movements. A continuous EEG with closed eyes was recorded for 12 min. During data acquisition, a subset of electrodes was monitored online by a technician to check for vigilance and artifacts. For patients taking benzodiazepines for sleep deprivation (one patient per group), medication was discontinued before EEG recording for at least 48 h. Only benzodiazepines with short half-life were allowed. One patient of the PD group was taking low-dose quetiapine for sleep deprivation, three patients were taking acetylcholinesterase inhibitors.

Two minutes of EEG data (single segments of at least 40 s) without artifacts or signs of sleep and drowsiness were visually selected, filtered (0.5–70 Hz, 2400 order least-squares filter) and down-sampled (500 Hz). Data from 214 electrodes (excluding cheek and neck electrodes) were subjected to automated artifact detection (Hatz et al., 2014). Resulting EEG data were re-referenced to average reference and bad channels were interpolated with the spherical spline method. Power spectra were calculated from epochs of 4 s duration (Welch’s method, spectral resolution 0.25 Hz) using a 80% Hanning window. The relative power for each frequency band was computed as the ratio between the absolute bandpower and the bandpower from 1 to 30 Hz. Relative power in the delta- (1–4 Hz), theta- (4–8 Hz), alpha1- (8–10 Hz), alpha2- (10–13 Hz), and beta- (13–30 Hz) bands were logit-transformed [t(x) = log(x/(1 − x)] to achieve an approximate normal distribution (Gasser et al., 1982). Global band powers (average over all 214 electrodes) and regional band powers were computed. For regional analyses, electrodes were grouped into 10 regions of interest (ROI) corresponding to the frontal, central, temporal, parietal, and occipital areas bilaterally (Stoffers et al., 2007). Median frequency was calculated in a spectral window between 4 and 14 Hz at occipital electrodes. For calculation of the median frequency, a “center of gravity” approach was chosen, taking into account all spectra generated for a single subject.

No significant differences between the patient groups regarding age, education, the combined MMSE/CDT, and gender were found (Kruskal–Wallis test, see Table 1). MMSE scores of both patient groups were similar and significantly smaller than those of the NC group (p = 0.04).

Regional analysis of relative power data revealed group and sub-group differences in the theta- and alpha2 bands as depicted in Figure 1. In both patient groups, the most significant differences as compared to NC were found in the left temporal region. 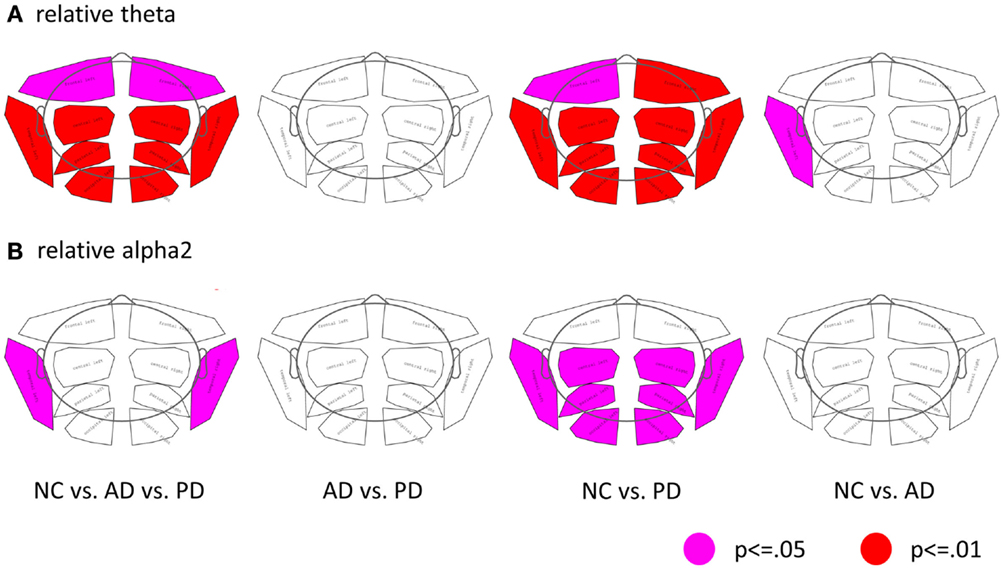 As the median frequency was significantly different between AD and PD, it was chosen as independent variable for a logistic regression model to classify the two groups. A significant classification of both groups (p = 0.02) was achieved. After backwards elimination, the resulting model included only median frequency as predictor (p = 0.03). ROC analysis yielded an AUC of 0.72 with a sensitivity and specificity at the best index of Youden (0.45) of 60 and 85%, respectively. The positive predictive and negative predictive values were 80 and 68%, respectively.

We checked for a confounding influence of the variables MMSE, LED, alertness, age, and gender on the power values, by entering the variables into linear models with stepwise backwards elimination. No significant effects of the potentially confounding variables on the qEEG parameters were found. We conducted sensitivity analysis by running the statistics on all but one PD patient taking neuroleptics and on all but three patients taking AChE-inhibitors. The outcome was not affected as similar results and significances were obtained with and without those patients.

The main alteration of EEG in patients with subtle cognitive deficits due to AD or PD consists in an increase of relative theta power, predominantly in the temporal regions and in a slowing of the occipital median frequency. The slowing is more pronounced in PD than in AD patients.

Bi-temporal increase of relative theta power in demented PD and AD patients is a known finding (Babiloni et al., 2011). While in PD, EEG slowing occurs already before cognitive decline (Berendse and Stam, 2007), it is observed in AD with incipient MCI (Roh et al., 2011).

Dysfunction of the cholinergic system is common in both, AD and PD (Mesulam et al., 2004; Bohnen and Albin, 2011) and an overlap of histopathological (Hughes et al., 1993; Emre, 2003) and biochemical changes (Alves et al., 2014) is known. EEG frequency is accelerated by cholinergic function and responds to therapy with acetylcholinesterase inhibitors in AD und PD (Fogelson et al., 2003; Babiloni et al., 2013). This fact could explain partly the slowing of EEG in both patient groups in our sample. Interestingly, EEG slowing is more pronounced in PD than in AD in the present study. This is in line and extends the findings by Babiloni et al. who found similar results AD and PD patients with more advanced cognitive dysfunction This difference may reflect a greater cholinergic deficit in cognitively impaired patients with PD-compared to AD (Bohnen et al., 2003; Kotagal et al., 2012) and reflects the degeneration of the cholinergic system as an important factor for cognitive decline in PD (Emre et al., 2004).

The advantage of the present study is the comparison of demographically well balanced groups of patients with AD or PD at incipient cognitive decline with a group of NCs. Limitations include the relatively small sample sizes and the inherent failure of AD-MCI patients to formally fulfill the diagnostic criteria of AD. Longitudinal assessment of these patients is warranted.

Copyright: © 2014 Benz, Hatz, Bousleiman, Ehrensperger, Gschwandtner, Hardmeier, Ruegg, Schindler, Zimmermann, Monsch and Fuhr. This is an open-access article distributed under the terms of the Creative Commons Attribution License (CC BY). The use, distribution or reproduction in other forums is permitted, provided the original author(s) or licensor are credited and that the original publication in this journal is cited, in accordance with accepted academic practice. No use, distribution or reproduction is permitted which does not comply with these terms.

†Nina Benz and Florian Hatz have contributed equally to this work.