Many studies have relied on structural brain imaging, such as whole-brain volume, regional gray matter volumes, and cortical thickness, to assess the effect of cognitive training in aging patients. The cortex, which is a tightly folded sheet of neurons, ranges in thickness between 1.5 and 4.5 mm (Parent and Carpenter, 1995). Measurements of cortical thickness can reflect the size, density, and arrangement of cells, which may be more closely linked with cognition ability than volumetric or intensity-based gray matter (GM) concentration measures, although these have also been shown to relate to other local measures of GM (Narr et al., 2007). Therefore, measurements of cortical thickness could provide important information about the regional integrity of the cerebral cortex and supply new insights into cognitive training (Liu et al., 2014).

The relationship between brain volumes and cognitive functions has been long-standing research interest. For example, some researchers have found positive correlations between GM volume and executive functions (Newman et al., 2007; Ruscheweyh et al., 2013) in cognitively healthy adults, and memory impairment is often associated with the atrophy of limbic structures (including the hippocampus and parahippocampal gyrus; Jack et al., 1992). However, fewer have shown the cortical thickness is correlated with cognitive functions (Ehrlich et al., 2012; Velayudhan et al., 2013; Kim et al., 2015b). For instance, Velayudhan et al. (2013) found that reduced thickness of the entorhinal cortex was related to reduced scores on perceptual and executive function tests, including perceptual speed and aspects of working memory in Alzheimer’s disease. In another study, right parahippocampal gyrus atrophy showed a significant correlation with the executive and visuospatial functions impairment in Parkinson’s disease (Kim et al., 2015b).

Participants were community-dwelling elders living in a neighborhood located in the Putuo District of Shanghai from March 2008 to April 2008. Inclusion criteria mandated that participants: (a) were 65–75 years of age; (b) had no severe physical or mental illnesses (such as brain tumor, cerebral infarction, cerebral hemorrhage, malnutrition, major depressive disorder and schizophrenia); (c) were able to live independently; (d) had no disability, and no difficulties in hearing, vision or communication; (e) had at least 1 year of formal education; and (f) had an education-adjusted normal score on the Chinese version of the Mini-Mental State Examination (MMSE; Li et al., 2006; >14 for those who had not finished primary school; >19 for those who completed primary school; or >24 for those who had graduated from middle school). Any participants exhibiting obvious cognitive decline, or who had received a diagnosis of Alzheimer’s disease or other major medical conditions, were excluded.

All participants underwent magnetic resonance imaging (MRI) scanning and cognitive assessments at baseline (Time 1) and a 12-month follow-up after the intervention (Time 2). Participants who were absent for one MRI scanning or one cognitive assessment were excluded from data analysis. All participants in this study provided a written informed consent form (LL(H)-09-04). This study was approved by the Human Research Ethics Committee of Tongji Hospital in Shanghai, China.

The cognitive training intervention was delivered by a trained expert in small groups (n ≤ 15). Each participant from the groups attended a total of 24 sessions, with each session being 60 min long, 2 days a week, for 12 weeks. The multi-domain cognitive training consisted of activities geared towards memory, reasoning, problem solving strategies, visuospatial map reading skills development, handcraft making, and health and physical exercise; the single-domain cognitive training specifically targeted reasoning training, including the Tower of Hanoi, numerical reasoning, Raven Progressive Matrices, and verbal reasoning. Booster training was provided to each group, which included one additional 60-min training session every month, from the 6-month follow-up to the 9-month follow-up after the intervention. A detailed description of the program was provided in the previous publication (Cheng et al., 2012).

For the image analysis, we used the FreeSurfer software package 5.3.01 for Mac OS. To estimate cortical thickness, images were automatically processed with the longitudinal stream in FreeSurfer (Reuter et al., 2012). All scans from two time points (Time 1 and Time 2) were first preprocessed independently with the cross-sectional stream. Then, each subject’s base template was created from the scans of his or her two time points, which operates as an initial estimate for the segmentation and surface reconstruction. The two measurement time points were then registered to the base template in order to ensure non-biased analysis with regard to the two time points (Wenger et al., 2012). All reconstructed data were visually checked for segmentation accuracy at each time point. This work flow has been shown to significantly increase reliability and statistical power (Han et al., 2006). Based on gyral and sulcal anatomy, 34 distinct cortical regions were then segmented for each hemisphere, using the Desikan–Killiany Atlas (Desikan et al., 2006). Finally, the cortical thickness was measured as the shortest distance (in mm) between the white matter surface and the pial surface (Fischl and Dale, 2000).

All statistical analyses were performed using the Statistical Package for the Social Sciences (SPSS; SPSSInc., Chicago, IL, USA) version 17.0 for Windows. The statistical significance threshold was set at p < 0.05. A repeated-measures analysis of variance (ANOVA) was performed to evaluate the training effect on RBANS scores and cortical thickness. Correlation between the RBANS change scores and cortical thickness changes in the participants using partial correlation after correcting for age, gender, years of education, and estimated total intracranial volume (eTIV). We computed RBANS change scores (Time 2 minus Time 1), as well as cortical thickness changes (Time 2 minus Time 1). We analyzed the multi-domain and single-domain cognitive training groups separately.

The Effect of Training on Cortical Thickness and Cognition

To investigate the impact of the cognitive training on the cortical thickness, the repeated-measures ANOVA showed a significant group × time interaction effects on the left supramarginal region (p = 0.025) and the left frontal pole region (p = 0.040; Figure 1). Tests of simple main effects revealed that the left supramarginal region (p = 0.020) cortical thickness was significantly reduced comparing to baseline in the single-domain training group, but not in the multi-domain training group. When the analyses were to investigate the impact of training on cognitive scores, a repeated-measures ANOVA revealed a marginal significant group × time interaction effects on visuospatial/constructional scores (p = 0.081) and delayed memory scores (p = 0.060). However, there were no group × time interaction effects on the other cortical regions and cognitive scores. 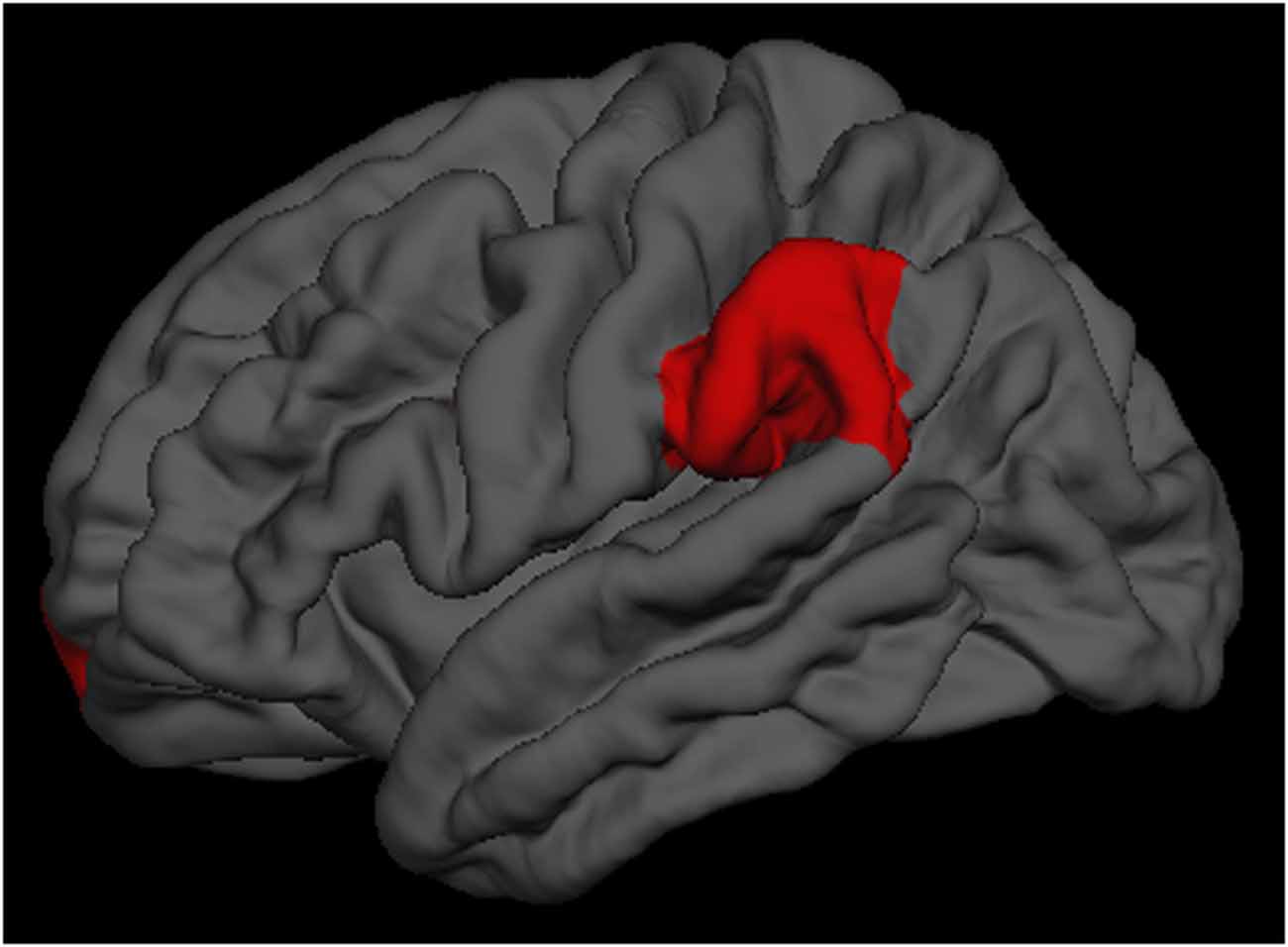 Associations of Cortical Thickness and Cognition

There were significantly group × time interaction effects on the left supramarginal and the left frontal pole cortical regions, which two regions were parts of attention network (Fan et al., 2005; Grant et al., 2013). These findings implicated that the multi-domain cognitive training would offer more advantages in attention in the healthy older adults. Due to the relative small sample size, the results from the repeated-measures ANOVA may lead to an underestimation of interaction effects, the visuospatial/constructional scores and delayed memory scores showed a marginal significant group × time interaction effects. As such, cognitive training could delay age-associated cortical change and cognitive decline, it was an efficacious behavioral strategy for improving or maintaining cognitive health in the healthy elderly (Kim et al., 2015a; Smith-Ray et al., 2015).

As indicated previously, changes in brain structure, as well as cognitive functions, are commonly seen in the aging population. The human brain is a complex network of functionally and structurally interconnected regions. For example, the attention network contains the integrated regions of the frontal lobe, superior parietal lobe, fusiform gyrus, anterior cingulated, thalamus, and left precentral gyrus (Fan et al., 2005). Similar to previous studies (Fan et al., 2005), we observed significantly positive correlations between changes in attention scores and right frontal poles in the multi-domain training group. However, in the single-domain training group, attention change scores were significantly negatively correlated with change in the right lateral occipital, lingual, pericalcarine, and precentral. Cognitive function in aging does not have a single etiology, as there is not one exclusive brain region or system that is affected. According to a compensation view (Grady, 2012; Walhovd et al., 2014; Morcom and Johnson, 2015), it may be that the right lateral occipital, lingual, pericalcarine, and precentral regions are indirectly involved in improving attention, and require other brain regions to be involved in the process. Our analysis suggests that multi-domain training was more beneficial to attention improvement than single-domain training in healthy older adult participants. In accordance with a compensation view, we also concluded that multi-domain cognitive training was more effective in improving visuospatial/constructional skills, and single-domain cognitive training was more effective in improving immediate memory.

There are several limitations to this study that should be kept in mind when interpreting our results. The first major limitation involves the relatively conservative number of subjects, as we only included a small proportion of all identified community members who met the criteria for the study. Larger sample size is needed to evaluate the effect of cognitive training on the aging brain. Second, the multi-domain training group had a slightly higher education level than the single-domain training group at the 12-month follow-up (as explained in “Results” Section). However, years of education was used as covariate in our analysis. Finally, our study only has two time points: MRI data at baseline and the 12-month follow-up. In other words, we did not collect data immediately following the completion of the intervention. These limitations may affect the external validity of the study, and deserve to be examined further.

The reviewer KRB and handling Editor declared their shared affiliation, and the handling Editor states that the process nevertheless met the standards of a fair and objective review.

We thank other members of the research group: Yan Cheng, Wei Feng, Yikang Zhu, Huiru Cui, Hongmei Liu and Lanlan Zhang contributed to data collection. We thank Dr. Yi Jin from the Chinese Academy of Sciences for assistance in the data analysis. This work was supported by National Nature Science Foundation of China (81371505, 30770769), the Science and Technology Commission of Shanghai Municipality (134119a2501, 13dz2260500) and the Shanghai Mental Health Center (2013-YJ-09, 2014-YJ-05).

Copyright © 2016 Jiang, Cao, Li, Tang, Li, Wang, Chan and Li. This is an open-access article distributed under the terms of the Creative Commons Attribution License (CC BY). The use, distribution and reproduction in other forums is permitted, provided the original author(s) or licensor are credited and that the original publication in this journal is cited, in accordance with accepted academic practice. No use, distribution or reproduction is permitted which does not comply with these terms.

Brain Networks in Aging: Reorganization and Modulation by Interventions