Background: Cognition and gait have often been studied separately after stroke whereas it has been suggested that these two domains could interact through a cognitive-motor interference.

Objective: To evaluate the influence of gait changes on cognitive outcome after an ischemic stroke (IS).

Methods: We conducted a prospective and monocentric study including patients admitted for an acute supratentorial IS with a National Institute of Health Stroke Score ≤ 15. Cognition, gait and motor disability were evaluated at baseline, 3 months and 1 year post-stroke, using the Montreal Cognitive Assessment (MoCA), the 10-m walking test (10-MWT) and the Fugl-Meyer motor assessment (FMMA). The effect of changes in 10-MWT over the year of follow-up on MoCA changes was estimated using a generalized linear mixed model with FMMA, age and gender as covariates.

Conclusion: Gait performance is associated with cognitive outcome after a mild to moderate IS, suggesting that they should be managed together to improve post-stroke independence.

Cognitive and walking impairment are two major sources of post-stroke disability. Although most of the stroke survivors experience some degrees of recovery in walking within the first months following symptom onset, gait disturbances can persist and worsen functional outcome (Baetens et al., 2013). The burden of cognitive and gait impairment has often been studied separately while the cognitive effort required to detect environmental changes and to compensate postural perturbations when walking suggests that these two domains should be evaluated together (Montero-Odasso et al., 2012). The strong interaction between cognition and gait has been well-described in neurodegenerative disorders. Indeed, slowing gait has been observed among patients with mild cognitive impairment (Montero-Odasso et al., 2012), while cognitive impairment could worsen motor abilities among patients with parkinsonism (Amboni et al., 2012). More recently, this cognitive-motor interference has been evaluated in post-stroke studies (Haggard et al., 2000; Cockburn et al., 2003; Chen et al., 2013), suggesting both concurrent gait and cognitive worsening in dual tasks. A trend for the functional benefit of cognitive-motor training on gait performance and dual task performance following stroke has been observed in some studies, reinforcing the clinical relevance of a combined evaluation of cognition and gait (Montero-Odasso et al., 2012). However, most of these studies included small samples of patients, did not consider the dynamic process of post-stroke cognitive evolution and used specific tasks with high cognitive effort, which are difficult to apply in clinical practice.

The aim of the present study was to evaluate the relationship between changes in gait performance assessed by walking speed and cognitive outcome, evaluated by the Montreal Cognitive Assessment scale (MoCA; 7) over a 1-year follow-up period in a large sample of patients suffering from a recent ischemic stroke.

Patients were recruited prospectively in a single center, the Bordeaux University Hospital, from June 2012 to February 2015. Inclusion criteria were men or women aged over 18 years old, diagnosed with a supratentorial ischemic stroke between 24 and 72 h from onset (baseline) and with a National Institute of Health Stroke Score (NIHSS) comprised between 1 and 15. Exclusion criteria were a pre-stroke modified Rankin scale (mRS) ≥ 1, pre-stroke dementia, psychiatric disorder matching with axis 1 DSM-IV criteria, history of chronic disease compromising patient's follow-up at 1 year, and incapacity to perform the tests due to severe hemiplegia or aphasia. Demographic data and cardiovascular risk factors were recorded, as well as the treatment in the acute phase with intravenous thrombolysis. This study was part of the “Brain Before Stroke” (BBS) study, a biomedical research protocol that was accepted by the local ethical board (CPP 2012/19 2012-A00190-43). An informed consent was signed by all patients.

Patients were evaluated at baseline, 3 months and 1 year using a standardized cognitive and motor evaluation. This evaluation was performed in a dedicated room of the stroke unit, by a stroke neurologist together with a trained clinical research assistant, except for the Fugl-Meyer Assessment (FMA; Fugl-Meyer, 1980) which was performed by a physical therapist. Global cognitive performance was assessed by the MoCA scale (Nasreddine et al., 2005), a 30-point score including sub-scores for the evaluation of visuospatial and executive functions (5 points), naming (3 points), attention (6 points), language (3 points), abstraction (2 points), recall (5 points) and orientation (6 points). A different version of the MoCA was used at each time point to avoid learning effects. Gait speed was assessed with the 10-m walk test (10-MWT; Graham et al., 2008). Patients were asked to walk at a usual pace during two trials and the mean time to assess these two trials, expressed in seconds, was reported. No verbal instruction was given during the walking task. Global neurologic deficit and motor function were evaluated with the NIHSS at baseline, together with the total FMA and its motor sub-score (FMMA; Bushnell et al., 2015) at baseline, 3 months and 1 year. Mood changes were assessed at these three time-points using the Hospital Anxiety and Depression scale (HAD; Zigmond and Snaith, 1983). Functional outcome was evaluated using mRS at 3 months and 1 year during a medical visit (van Swieten et al., 1988). Functional independence was defined by a mRS ≤ 2.

Cognitive impairment was defined by a MoCA score <26 at 1 year post-stroke (Lees et al., 2014). A cut-off of <26 is usually used to detect single-domain cognitive impairment with a good sensitivity (Lees et al., 2014). Comparisons of demographic and clinical data between groups of MoCA <26 and ≥ 26 at 1 year were performed using unpaired two-samples Wilcoxon test or Chi 2 test for qualitative variables. Estimation of gait effects on cognitive outcome was evaluated using a generalized linear mixed model with random slopes fitted by restricted maximum likelihood (Breslow and Clayton, 1993; Chu et al., 2011). A mixed effect model has the advantage of assessing the association between changes in gait and cognitive performance over the longitudinal follow-up while including fixed effect predictors and random effects. We first performed bivariate analyses with the total MoCA score as the dependent variable, and 10-MWT, FMMA, age and gender as fixed effects. These intermediate analyses are presented as Table S1. We then performed multivariate analysis including all significant variables (p < 0.05) from the bivariate analysis. The model was validated by a visual inspection of histograms showing that residuals and random slopes had a nearly normal distribution. Analyses were repeated for each MoCA sub-score. Statistical analyses were performed with R software version 3.2.4, and the “lmerTest” package was used for the construction of generalized linear mixed models. Statistical significance was set at 0.05 for all tests. Statistical adjustment for multiple tests (Bonferroni correction) was used for the multivariate analysis. 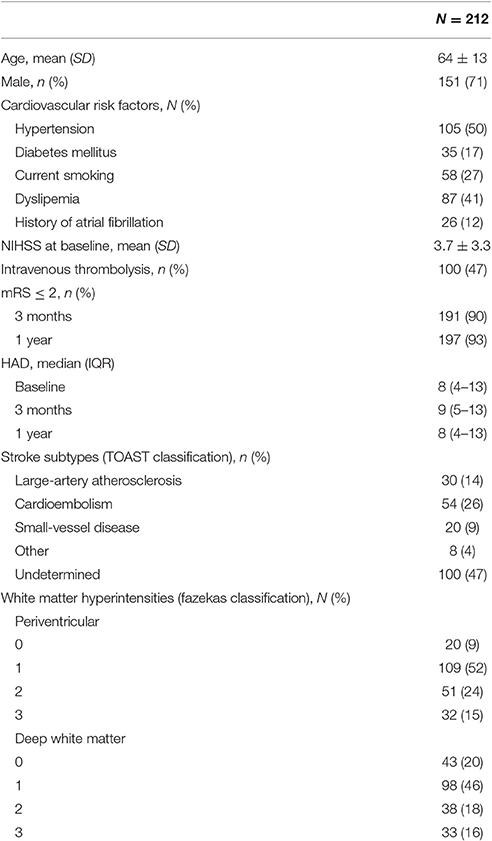 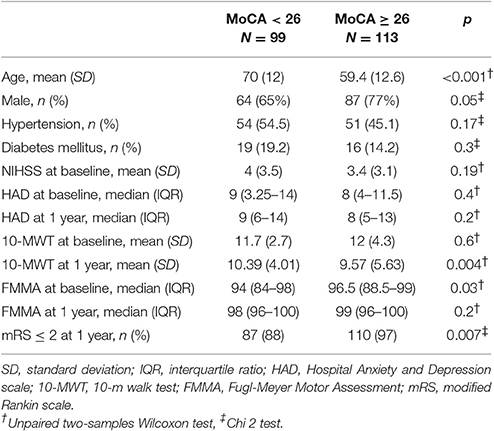 Table 3. Clinical scores by groups of MoCA measured at 1 year.

Figure 1. Changes in 10-MWT and FMMA by groups of MoCA measured at 1 year. Graphs show medians, first and third quartiles, and ranges.

As 10-MWT at baseline was similar in the two groups but different at 3 months and 1 year, we analyzed the relationship between changes in 10-MWT over the year of follow-up and the evolution of MoCA scores. Using a generalized linear mixed model, changes in 10-MWT were significantly associated with changes in MoCA scores (corrected p = 0.002, Table 4) independently of age, gender and FMMA severity. To evaluate whether the association between gait and cognition concerned a specific cognitive domain, we considered the sub-scores of the MoCA. Changes in gait performance over 1 year were associated with changes in executive functions (β = −0.04, 95% confidence interval [95% CI] −0.07 to −0.01, corrected p = 0.01) together with changes in recall (β = −0.06, 95% CI −0.1 to −0.03, corrected p = 0.002, Table 4).

The main results of this study are that (i) in a population of mild to moderate stroke, change in gait function over 1-year post-stroke is associated with the evolution of global cognitive performance; and (ii) among the cognitive domains, executive functions and recall are the most linked to change in gait velocity.

In the current study, a strong influence of changes in gait performance on the evolution of executive functions and recall between baseline and 1 year was observed. This finding is in accordance with previous studies performed in aging and central nervous system disorders such as Alzheimer's disease, Parkinson's disease, stroke or traumatic brain injury. These studies showed an association between gait performance and impairment in attention, processing speed, verbal fluency, executive functions and memory (Al-Yahya et al., 2011). After stroke, more than two-thirds of patients were reported to suffer from working memory, executive functions and episodic memory impairment (Jaillard et al., 2010). This high frequency highlights the potentially deleterious functional impact of these forms of cognitive impairment on stroke outcome.

While still poorly understood, the close interaction between cognition and gait could be related to a cortical competition amidst cognitive and motor processes (Montero-Odasso et al., 2012). This phenomenon could be exacerbated by different brain changes which are often observed in stroke patients, the main one being the extent of white matter lesions and, as was recently described, the amyloid brain burden (Ly et al., 2012; Del Campo et al., 2016; Kim et al., 2016).

These results should be interpreted cautiously due to some limitations. First, as indicated by the low NIHSS at baseline, patients were highly selected, excluding those with severe hemiplegia or severe aphasia impeding clinical evaluation. For this reason, our results might not be generalized to more severe patients. However, the low level of physical disabilities of our sample provided the opportunity to evaluate cognition and gait without a major influence of severe neurological deficits. Second, evaluations included only the MoCA for cognitive assessment and that of gait velocity (while more discerning tests are available including dual-task paradigms). However, the observation of a strong association between the two domains through these simple tasks indicates the strength of their association and the need to evaluate these two simple markers in clinical practice. Third, although MoCA sub-scores have been used in a few studies (Lam et al., 2013; Wu et al., 2013; Washida et al., 2014), their validity for the determination of impairment in the corresponding cognitive subdomain remains to be demonstrated.

This study highlights the strong association between change in gait performance and global cognitive outcome in a population of mild to moderate stroke. It reinforces the hypothesis that cognition should be evaluated in patients with gait complaints after stroke, and that post-stroke gait rehabilitation should also include cognitive rehabilitation programs.

This study was carried out in accordance with the recommendations of the French law “Jardé” relating to research involving human subjects, and the regional ethical board (CPP 2012/19 2012-A00190-43), with written informed consent for all subjects. All subjects gave written informed consent in accordance with the Declaration of Helsinki. The protocol was approved by the French Human Protection Committee of south-west and French oversea departments III.

The study was supported by public grants from the French Agence Nationale de la Recherche within the context of the Investments for the Future Program, referenced ANR-10-LABX-57 and named “TRAIL” (Translational Research and Advanced Imaging Laboratory). The study was funded by a public grant from the French government (PHRC protocole hospitalier de recherche clinique inter-régional) funded in 2012.

The authors thank Dr. Joel Swendsen for his revision of the manuscript.

The Supplementary Material for this article can be found online at: https://www.frontiersin.org/article/10.3389/fnagi.2017.00153/full#supplementary-material

Copyright © 2017 Sagnier, Renou, Olindo, Debruxelles, Poli, Rouanet, Munsch, Tourdias and Sibon. This is an open-access article distributed under the terms of the Creative Commons Attribution License (CC BY). The use, distribution or reproduction in other forums is permitted, provided the original author(s) or licensor are credited and that the original publication in this journal is cited, in accordance with accepted academic practice. No use, distribution or reproduction is permitted which does not comply with these terms.