Background: Fatigue and depressive symptoms are common and often inter-related stroke sequelae. This study investigates how they are related, directly or indirectly, to mobility and cognitive outcomes within 6 months of stroke.

Conclusions: Fatigue and depressive symptoms are related distinctly to cognitive and mobility impairments post-stroke. Fatigue was associated with poorer lower limb motor function, and with cognition indirectly via depressive symptoms.

Fatigue and depressive symptoms are sufficiently prevalent to pose tangible barriers to recovery and rehabilitation. Post-stroke depression increases the risk of cognitive impairment (Kauhanen et al., 1999), and it appears to contribute to mobility outcomes (van de Port et al., 2006). Fatigue influences mobility (Ponchel et al., 2015), as measured using the Berg Balance Scale (BBS) or mobility tests (Michael et al., 2006; Duncan et al., 2015). There remains a need to dissect the complex inter-relationships between these prevalent sequelae and cognitive and mobility outcomes (Mandliya et al., 2016). There is little evidence that post-stroke fatigue is directly associated with cognition; however, a recent synthesis of evidence suggested that fatigue may heighten the influence of depressive symptoms (Ponchel et al., 2015), and therefore, there may be an indirect relationship between fatigue and cognition that is mediated by depressive symptoms. It is of clinical importance to identify primary treatment foci because pharmacological treatments for post-stroke depression, fatigue, and cognitive impairment may have unexpected, complementary or antagonistic effects on functioning in other domains of recovery.

Participants were part of the Rehabilitation Affiliates Study, a multi-site investigation on physical and cognitive recovery after stroke in Toronto (Middleton et al., 2014). We report cross-sectional data from participants who presented to their first visit within 180 days of acute stroke. Inclusion criteria: primary diagnosis of ischemic or haemorrhagic stroke, ability to speak and understand English, completed assessments for depression, cognitive status, and stroke severity. Participants with incomplete cognitive or mobility data were excluded from those analyses. All subjects gave written informed consent in accordance with the Declaration of Helsinki. The protocol was approved by the Research Ethics Board of Sunnybrook Health Sciences Centre.

Screening for Depressive Symptoms and Fatigue

The Center for Epidemiological Studies Depression scale (CES-D) is a 60-point self-report instrument that assesses the presence and severity of depressive symptoms over the past week, used extensively in stroke (Bensimon et al., 2014; Swardfager et al., 2014). The Fatigue Assessment Scale (FAS) is also a self-report instrument used in stroke research (Duncan et al., 2015), with 10 items to score aspects of fatigue, each rated from 1 to 5. A higher FAS score indicates greater fatigue.

Mobility was assessed using 3 measures: BBS score (Berg et al., 1992), the Chedoke-McMaster Stroke Assessment leg (CMSA-leg) score (Gowland et al., 1993), and the distance traveled during a 2 min walk test (Figures 2A,C). Exploratory factor analysis was used to produce a normally distributed composite mobility score based on lower limb function, combining variance common to each mobility test to minimize the impact of measurement errors inherent to each test, to account for ceiling effects on the Berg, for floor and ordinal effects in the CMSA-leg, and to produce a single mobility outcome score.

Composites were generated using maximum likelihood exploratory factor analysis (“factanal” in R version 3.1.2). Outcomes were derived from all participants who had 3 mobility or 4 cognitive measures. The factor loadings used the Thomson's regression method.

Linear regression models were run for the two composites separately. CES-D and FAS were independent variables. Covariates included a priori were age, National Institute of Health Stroke Severity (NIHSS) scale, days post-stroke and use of antidepressant medications. Years of education was covaried in the cognitive model. Path analysis assesses whether one independent variable influences a dependent variable indirectly via a second mediating variable. Direct and indirect influences of CES-D and FAS on the composite outcome measures were assessed using the PROCESS macro (Hayes, 2013) for SPSS. Ten thousand bootstraps produced 95% confidence intervals (CI) on the path coefficient parameter estimates (Figure 4). Mediated (indirect) effects were considered significant if the 95% CI for their parameter estimates did not cross zero. 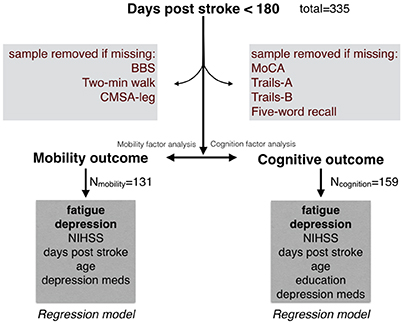 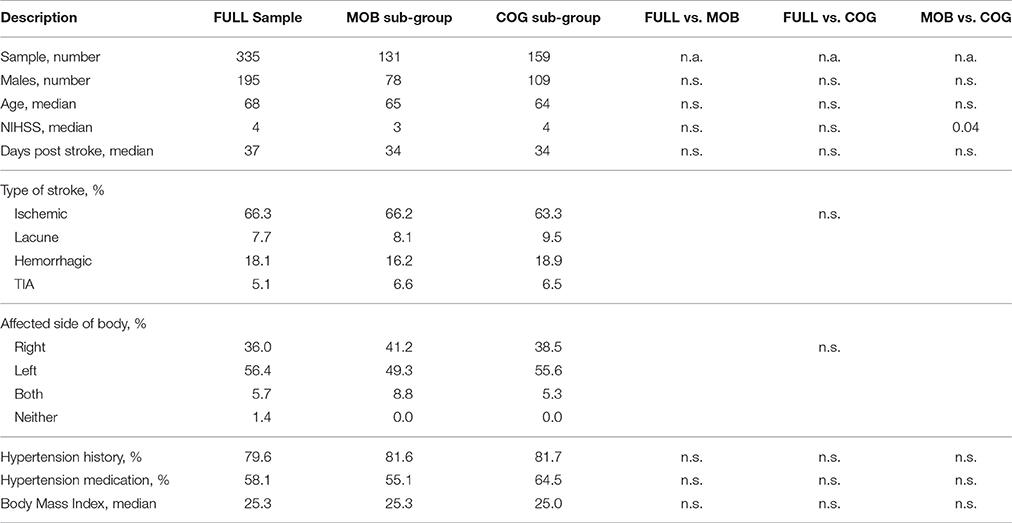 Effects of Fatigue and Depressive Symptoms on the Mobility Composite Score 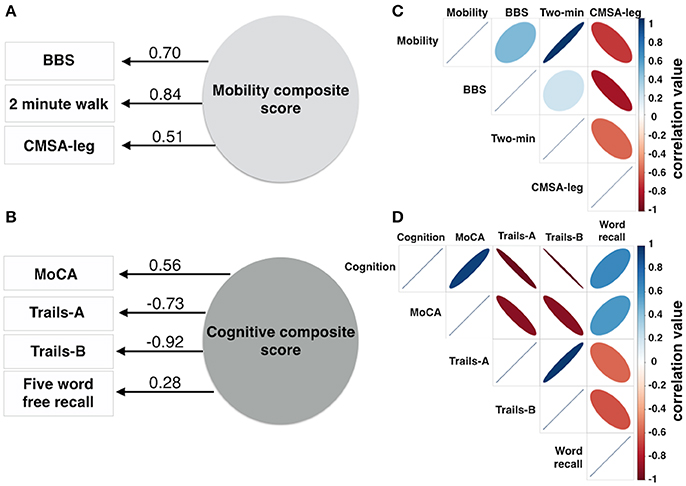 Figure 2. Composite scores for mobility and cognition were derived from 3 or 4 variables, respectively. Factor analysis produced one factor for mobility (A) and one factor for cognition (B). The numbers adjacent to the lines in (A,B) denote the factor loadings onto the composite score. The correlation matrix describes the individual correlation for the mobility data (C) and cognitive data (D). The color bars in (C,D) represent correlation coefficient values ranging from −1 to 1. The size of the ellipse indicates the degree of shared variance between each of the variables (wide ellipse, low correlation; narrow ellipse, high correlation). BBS, Berg Balance Scale; CMSA-leg, Chedoke-McMaster Stroke Assessment leg score.

Table 2. Model results for (A) mobility and (B) cognitive outcomes. 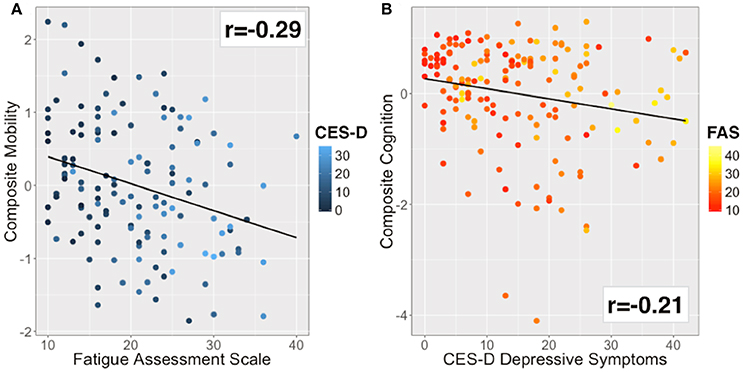 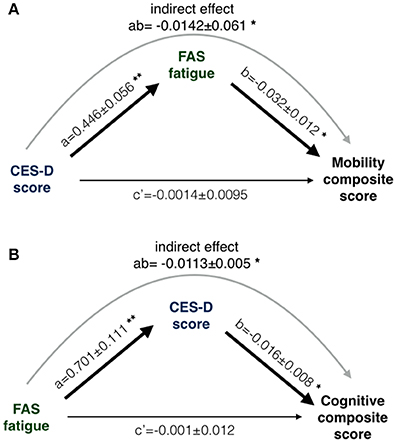 Effects of Depressive Symptoms and Fatigue on the Cognitive Composite Score

Post-stroke fatigue was associated with lower limb mobility, while post-stroke depressive symptoms were associated with cognitive performance. In mediation analyses, fatigue was associated with poorer cognitive performance only insofar as it was related to depressive symptoms. Similarly, depressive symptoms were associated with poorer mobility performance only insofar as participants experienced symptoms of fatigue. Previously, depression has been suggested to contribute to a decline in mobility in the first few years post-stroke (van de Port et al., 2006). Fatigue might be assessed as a mediator of this longitudinally. Post-stroke fatigue and depression had overlapping yet distinct effects on functional outcome measures; these findings add to a path analysis study on disability among stroke survivors (Mandliya et al., 2016). The current results underscore the importance of recognizing fatigue clinically, and the need to understand the underlying pathophysiology. Its importance is also highlighted by a high prevalence and persistence, remaining elevated in one study at 6 year follow-up (Elf et al., 2016).

The etiologies of fatigue post-stroke may be heterogeneous, associated with sleep disturbances, symptoms of depression and anxiety, poor coping, loss of control, and with other emotional and behavioral disturbances (Barritt and Smithard, 2011; Wu et al., 2014). Sleep disturbances are particularly notable because obstructive sleep apnea (OSA) is highly prevalent in stroke, it predicts poorer recovery, and it is not consistently identified (Swartz et al., 2016). While here we show that fatigue rooted in depressive symptoms can impact motor recovery, identifying additional comorbidities that contribute to fatigue may identify salient clinical foci for treatment that impact mobility outcomes (Sandu et al., 2015). This is particularly important since targeting post-stroke fatigue symptoms directly has been met with limited effectiveness (Wu et al., 2015).

Fatigue ratings represent manifestations of muscle (peripheral) fatigue and/or central fatigue, which may have different relationships with clinical, biological and behavioral characteristics. Lower physical activity, or reduced output from motor centers affected by stroke, might lead to muscle deconditioning (Marzolini et al., 2016). Post-stroke fatigue does not appear to be related to white matter lesions, atrophy nor stroke type, and lesion location findings have been inconclusive (Kutlubaev et al., 2012; Ponchel et al., 2015); however, post-stroke fatigue may be associated with lesions to the cerebellum, corona radiata, basal ganglia and internal capsule (Kutlubaev et al., 2012; Wei et al., 2016). Although findings have been mixed, meta-analyses suggest a higher likelihood of post-stroke depression with lesions to the right hemisphere (Wei et al., 2015), left basal ganglia or frontal areas (Robinson and Jorge, 2016). Differentiating the underlying pathobiology of fatigue and depression will be important to inform personalized treatments that address particular barriers to cognitive and mobility recovery.

This study generated two holistic stroke recovery outcome measures based on highly sensitive and ecologically valid tests. The approach may discard portions of variance unique to the individual indicators while reinforcing features common to multiple related variables. Capturing the common variance increases the signal-to-noise ratio, while also reducing outlier, ceiling, floor and other spurious effects, as well as reducing the number of multiple comparisons. The approach may prove particularly useful in stroke recovery research where patient heterogeneity is common; for instance, a specific impairment related to stroke may produce a poor result on a single test but not another test intended to measure the same underlying construct.

As potential limitations, we excluded participants with missing data, which reduced the sample size for the mobility and cognitive subgroups, which may have introduced selection biases. Also, the study was cross-sectional; the path analysis results cannot be used to infer causal relationships. Patients were selected within 6 months of stroke, and longer-term studies will also be required. Neuroimaging and fluid biomarker data were unavailable; therefore we are unable to address possible neuroanatomical and inflammatory bases for the current findings (Macintosh and Graham, 2013; Bensimon et al., 2014). Although the FAS is a well-established measure, we cannot comment on how the findings might map onto other fatigue instruments. Similarly, the CES-D cannot replace a clinical diagnosis of a depressive episode; however, it has been used extensively in adults living with stroke (Swardfager et al., 2014). Finally, the BBS probes functional mobility, analogous to the Rivermead Mobility Index in stroke, but it suffers from a ceiling effect in low impairment individuals (Blum and Korner-Bitensky, 2008); we mitigated this effect by hypothesis testing on a composite mobility score.

In summary, this study used inferential path modeling to dissect distinct outcomes related to fatigue and depressive symptoms within 6 months of stroke. Though often related, these stroke sequelae exerted differential influences on cognitive and mobility recovery measures. The results implicate additional screening for barriers to recovery in rehabilitation, since depression may contribute to cognitive recovery while comorbidities that lead to fatigue may portend poorer recovery of motor performance.

Copyright © 2017 MacIntosh, Edwards, Kang, Cogo-Moreira, Chen, Mochizuki, Herrmann and Swardfager. This is an open-access article distributed under the terms of the Creative Commons Attribution License (CC BY). The use, distribution or reproduction in other forums is permitted, provided the original author(s) or licensor are credited and that the original publication in this journal is cited, in accordance with accepted academic practice. No use, distribution or reproduction is permitted which does not comply with these terms.