- Although not significant due to insufficient power, non-demented individuals with PD had increased cognitive workload compared to the healthy controls throughout the testing

- In future, pupillary response might be used to detect cognitive impairment in individuals with PD

Impairment in working memory is one of the first symptoms of cognitive dysfunction in PD, eventually resulting in diminished performance on activities of daily living and management of medication (Costa et al., 2015; Fallon et al., 2017). Working memory refers to the concurrent storage and information processing during dynamic cognitive activity (Bublak et al., 2002). This cognitive domain is especially necessary to manage increased cognitive demand when task-relevant information gradually increases (Bublak et al., 2002). Degeneration of dopaminergic cells in the substantia nigra are considered the main cause of impairments in working memory (Lewis et al., 2005). The loss of dopaminergic cells in the substantia nigra results in reduced activity in the ventro-lateral and dorso-lateral prefrontal cortices while performing a working memory task in PD (Lewis et al., 2003a,b). Deficits in noradrenergic pathways also contribute to working memory impairments in PD (Kehagia et al., 2010). To date, the cognitive workload exhibited in real-time during tasks of working memory in PD is not clear.

To our knowledge, the relationship between pupillary response and cognitive demand during a working memory task with incremental difficulty has not been examined in non-demented people with PD. The pupils have been shown to be sensitive to incremental increases in cognitive demand in people with mild cognitive impairment and in individuals with dementia (Elman et al., 2017; Granholm et al., 2017). Furthermore, it has been shown that individuals who performed high on the digit-span task exhibited lesser pupil dilation compared to the individuals who performed poorly on the same task (Granholm et al., 2017). This might suggest that pupillary response differentiates between high performers and low performers on the cognitive task. However, it is not known how PD pathophysiology affects pupillary response between high performers and low performers.

Non-demented participants with PD were recruited from the Parkinson’s Disease and Movement Disorder Center at the University of Kansas Medical Center (KUMC) between January and April 2017. Diagnosis of idiopathic PD was based on the UK Parkinson’s Disease Brain Bank Clinical Diagnostic Criteria (Hughes et al., 1992). Healthy controls were spouses of the participants with PD or recruited from the community through word-of-mouth. The study participation criteria were designed to exclude people with PD with cognitive impairment. Therefore, the inclusion criteria for both groups were: (1) Montreal Cognitive Assessment (MOCA) score >25; (2) non-demented individuals with PD whose scores lie within two standard deviations from normative values or from mean values of healthy controls on the cognitive battery to determine mild cognitive impairment (Litvan et al., 2012); and (3) voluntary consent. The exclusion criteria were: (1) diagnosis of mild cognitive impairment or dementia; (2) atypical parkinsonism; (3) secondary parkinsonism; (4) history of diagnosed but unresolved neurological, visual (e.g., glaucoma, cataract) or vestibular conditions unrelated to PD; (4) severe trunk and head dyskinesia or dystonia in the medication “ON” state; (5) blepharospasm; (6) deep brain stimulation; and (7) unpredictable motor fluctuations. The study was approved by the Human Subjects Committee at the University of Kansas Medical Center (KUMC), which complies with the Declaration of Helsinki (approval number 12490). Institutionally approved written consent was obtained before enrolment from all participants. 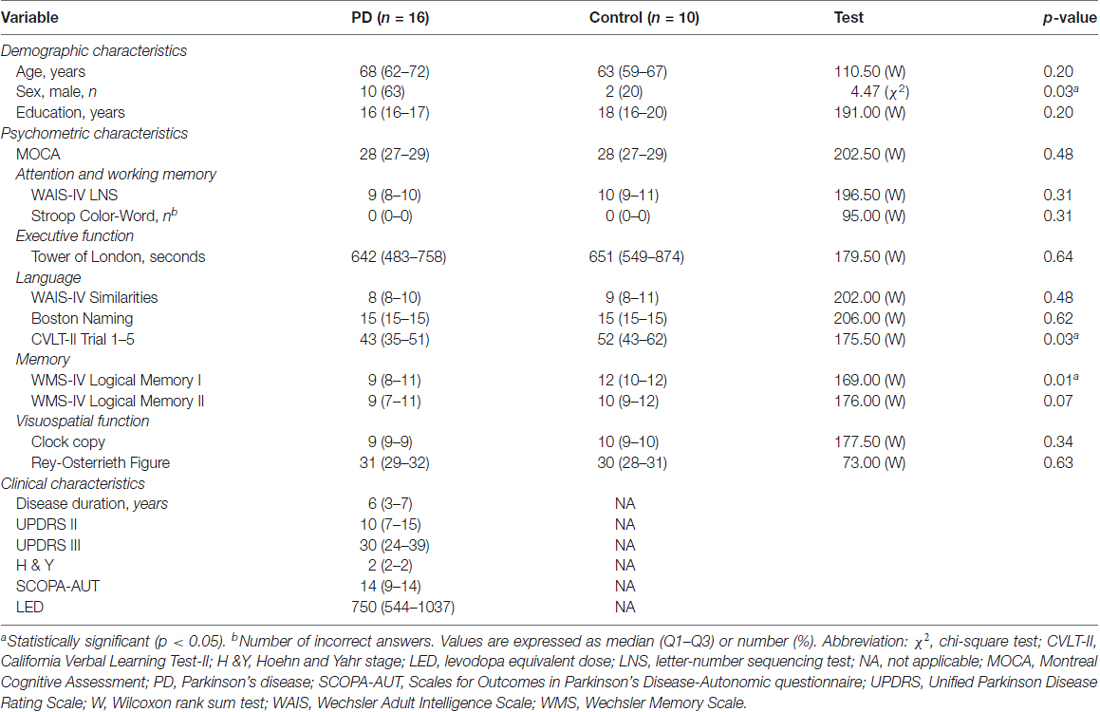 The letter-number sequencing (LNS) test of the Wechsler Adult Intelligence Scale-IV (WAIS-IV) was administered to assess incremental demand of working memory using an iPad-based application from Q-interactive (Pearson Inc., 2017; Wechsler, 2008). Participants were asked to recall a sequence of scrambled letters and numbers by first repeating the sequence of numbers in ascending order followed by the sequence of letters in alphabetical order. The test ended when the participant incorrectly recalled the sequence on three consecutive trials or achieved the maximum LN load. The maximum score (scaled) for this test is 19 points, which indicates well-functioning working memory. This test consists of a series of questions with increasing difficulty from two LN loads to eight LN loads, in which higher LN load indicates higher task difficulty. The test was administered by a trained research assistant in a single session.

Participants were seated in front of the 9.7″ iPad Air 2 (A1566, Apple Inc., 2014) mounted on a stand at about eye height on a height-adjustable table (Figure 1). A remote eye tracker (FX3, SeeingMachines Inc.) was placed right underneath the iPad and recorded raw pupil size at 60 Hz while participants were performing cognitive tasks. This remote setup of the eye tracker did not require any actual physical contact, such as a chin rest or head-mounted camera, between the participant and the device. Although this setup allows pupil measurements without any distractions, participants were asked to focus on a red dot with a radius of 4.5 cm on the iPad screen during the tasks in order to minimize missing variables collected by the remote eye tracker using the EyeWorks™ Record software (EyeTracking Inc., 2011). Video and audio were recorded throughout the LNS task using the same software for analysis. 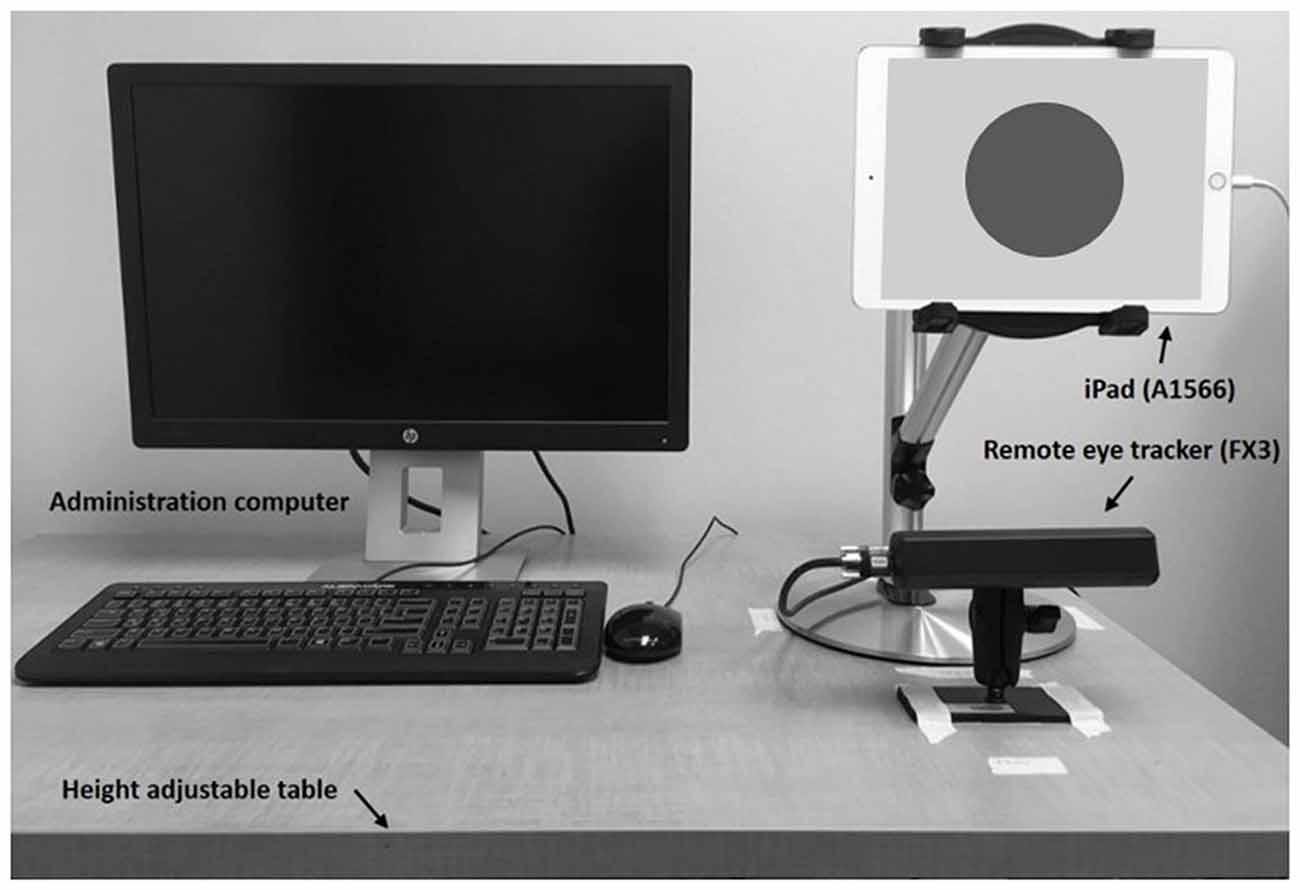 Pupillary responses were transformed into the Index of Cognitive Activity (ICA). ICA is the proportion of observations in a second that reflect significant mental effort, with signal smoothing to eliminate statistical noise and hardware anomalies. The ICA is based on the transformation of pupil diameter through signal processing algorithms of wavelet analysis. It focuses on the dilation reflex similar to task-evoked pupillary response, but also takes into account both the rapid constrictions of the pupil that result from increased light and the relatively slow dilations that result from accommodation to decreased light (Marshall, 2007). In the current study, ICA method was used to quantify cognitive workload during the cognitive testing. The EyeWorks™ Analyze software (EyeTracking Inc., 2011) was used to transform pupil dilation data from the right eye to the scaled ICA that ranges between 0 and 1. Although right eye and left eye ICA results were strongly correlated (r = 0.70, p < 0.001), right eye ICA data was shown interpretable results compared to the left eye ICA data which was also consistent with the previous literature (Gangeddula et al., 2017; Ranchet et al., 2017b). Recorded videos were analyzed to find start- and end-time points of each LN load. Then, scaled ICA data extracted from the EyeWorks™ Analyze software were cut in multiple blocks from the two LN load up to the eight LN load. Finally, means and standard error of the mean (SEM) of scaled ICA values for each LN load were calculated.

Descriptive statistics were performed for demographic, clinical and psychometric data using Wilcoxon rank sum test (W) or chi-square test (χ2). Normality was tested with the Shapiro-Wilk test. The effect size was assessed using Cohen’s d and interpreted by Cohen’s criteria (small = 0.20; medium = 0.50; large = 0.80; Cohen, 1992). Pearson’s correlation coefficient (r) was calculated for each group to examine relationships between mean ICAs and other variables including demographic, clinical, and cognitive test scores utilized in this study. A linear mixed model with fixed effects was employed to analyze cognitive workload changes as a result of cognitive demand for both groups. The main effects of group (PD vs. controls) and demand (LN load), and interaction effect of group by demand were analyzed. The repeated effect of LN loads was analyzed using a correlation compound-symmetry structure, which showed the best model fit. Pairwise comparisons were conducted with a Sidak correction for multiple comparisons. Missing ICA variables, especially for the six LN load, were imputed with the last ICA values in the previous LN load (last observation carried forward). A second linear mixed model was employed to investigate the pattern of cognitive workload as a result of cognitive demand in high performers (i.e., those who successfully repeated seven or eight sequences) and low performers (i.e., those successfully repeated only five or six sequences), both in the PD and the control groups. For all tests, significance level was set at p = 0.05. All statistical analyses were performed using IBM SPSS Statistics v23.

A total of 26 participants were included in this study: 16 non-demented participants with PD and 10 healthy controls. The controls were matched for age, education and cognitive status (MOCA). There were more men in the PD group compared to the control group (p = 0.03; Table 1). Although the PD group scored lower in California Verbal Learning Test-II (p = 0.04) and Wechsler Memory Scale-IV Logical Memory I (p = 0.01) compared with the control group, none of PD participants scored two standard deviations below than the healthy controls, which indicated no cognitive impairment according to the Movement Disorder Society criteria (Litvan et al., 2012). The median disease duration was 6 years. Fifteen patients with PD were in Hoehn & Yahr (ON) stage 2; one was 2.5. No significant correlations were found between LED and both psychometric test performances and pupillary responses. Other clinical characteristics are shown in Table 1. 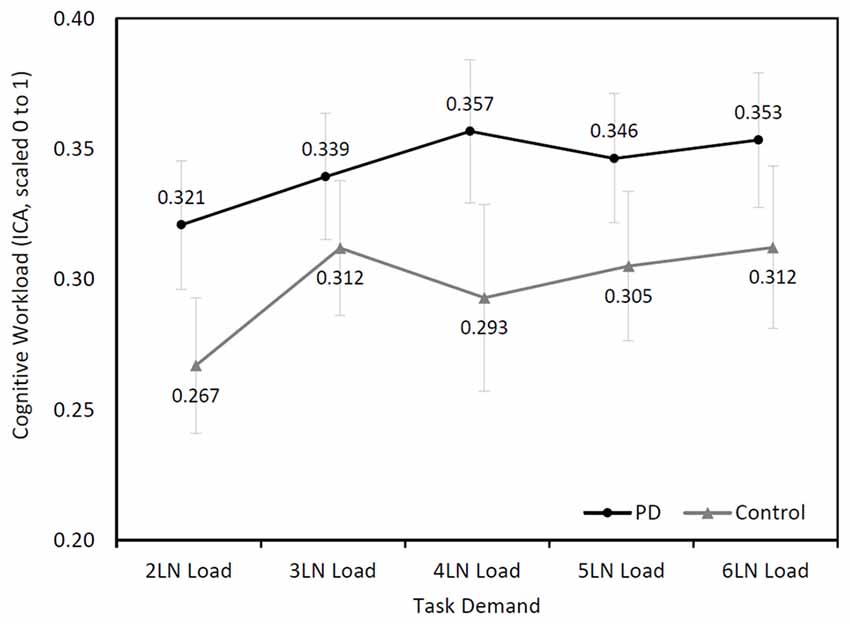 Figure 2. Mean (±SEM) changes of cognitive workload (Index of Cognitive Activity (ICA), scaled 0 to1) over cognitive demand during the letter-number sequencing (LNS) in the Parkinson’s disease (PD) and control groups. 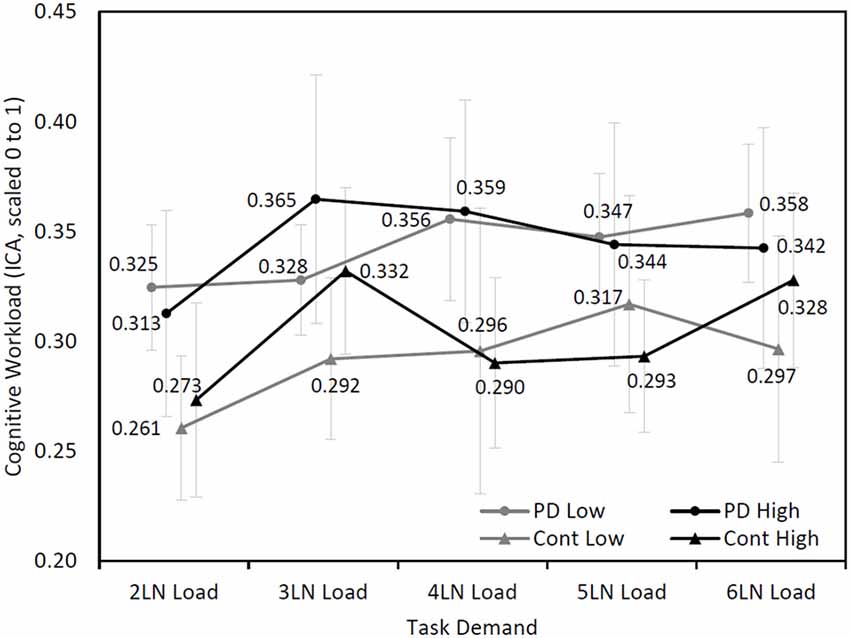 The mechanism of the pupillary response to cognitive workload is mediated by a combination of parasympathetic and sympathetic activity (Beatty, 1982; Sirois and Brisson, 2014). Increased activation of the locus coeruleus subsequently sends inhibitory signals to the Edinger-Westphal nucleus, leading to inhibition of pupil constriction muscles through parasympathetic fibers, resulting in pupil dilation (Beatty and Lucero-Wagoner, 2000). Also, increased activation of sympathetic fibers leads to activation of dilator pupillae, which results in pupil dilation (Sirois and Brisson, 2014). However, PD pathophysiology affects the autonomic nervous system and may lead to physiological differences in the pupil size compared to the healthy adults (Micieli et al., 2003). The ICA algorithm we used for cognitive workload analysis, filters out these physiological differences and calculates the change in pupil dilation resulting from increased cognitive workload (Marshall, 2007). Also, the correlation analysis showed no influence of autonomic dysfunction in ICA. Therefore, it is conceivable that our results were not affected by PD pathophysiology, and accurately reflects the amount of cognitive workload during incremental cognitive demand.

This study was funded in part by the American Parkinson’s Disease Association (PI: HD), and by the T32HD057850 from the Eunice Kennedy Shriver National Institute of Child Health and Human Development (MK).

Copyright © 2018 Kahya, Moon, Lyons, Pahwa, Akinwuntan and Devos. This is an open-access article distributed under the terms of the Creative Commons Attribution License (CC BY). The use, distribution or reproduction in other forums is permitted, provided the original author(s) and the copyright owner are credited and that the original publication in this journal is cited, in accordance with accepted academic practice. No use, distribution or reproduction is permitted which does not comply with these terms.