The Effects of Tai Chi Intervention on Healthy Elderly by Means of Neuroimaging and EEG: A Systematic Review

Aging is a process associated with a decline in cognitive and motor functions, which can be attributed to neurological changes in the brain. Tai Chi, a multimodal mind-body exercise, can be practiced by people across all ages. Previous research identified effects of Tai Chi practice on delaying cognitive and motor degeneration. Benefits in behavioral performance included improved fine and gross motor skills, postural control, muscle strength, and so forth. Neural plasticity remained in the aging brain implies that Tai Chi-associated benefits may not be limited to the behavioral level. Instead, neurological changes in the human brain play a significant role in corresponding to the behavioral improvement. However, previous studies mainly focused on the effects of behavioral performance, leaving neurological changes largely unknown. This systematic review summarized extant studies that used brain imaging techniques and EEG to examine the effects of Tai Chi on older adults. Eleven articles were eligible for the final review. Three neuroimaging techniques including fMRI (N = 6), EEG (N = 4), and MRI (N = 1), were employed for different study interests. Significant changes were reported on subjects' cortical thickness, functional connectivity and homogeneity of the brain, and executive network neural function after Tai Chi intervention. The findings suggested that Tai Chi intervention give rise to beneficial neurological changes in the human brain. Future research should develop valid and convincing study design by applying neuroimaging techniques to detect effects of Tai Chi intervention on the central nervous system of older adults. By integrating neuroimaging techniques into randomized controlled trials involved with Tai Chi intervention, researchers can extend the current research focus from behavioral domain to neurological level.

Older adults experience gradual regression of abilities. In addition to the physiological changes such as loss of muscular strength and declined vision, neurological ability declines with advanced aging. Tomasi and Volkow (2012) proposed that age-related decrease in motor and cognitive functions is associated with degeneration of the brain networks and changes in brain anatomy. Other studies indicated that decrease in functional connectivity as well as atrophy in gray matter and basal ganglia result in lack of motor control in older adults (Seidler et al., 2010; Hoffstaedter et al., 2015). However, aging process is reversible due to the plasticity and adaptivity of the human brain to experience-specific tasks (Adkins et al., 2006; Petzinger et al., 2010). Brain plasticity implies that reorganization of brain structure and functional connectivity is possible in older adults (Erickson et al., 2007). The finding suggested that appropriate intervention protocols such as exercise and motor training can counteract declines associated with advanced aging (Erickson et al., 2007; Seidler et al., 2010). For example, older adults participating in a 6-month aerobic exercise demonstrated better cardiovascular fitness and enhanced brain plasticity than the sedentary counterparts. Specifically, increased brain volume in gray and white matter were considered evidence of intact central nervous system and contributed to cognitive improvement (Colcombe et al., 2004, 2006). Bearing with the perception as to the significant role of brain plasticity in mitigating or even reversing the course of aging, researchers attempt to understand the neural mechanisms underlying exercise-related improvement in cognitive and motor performance.

The current review summarized extant studies that applied Tai Chi to promote health for the following reasons. First, Tai Chi is an increasingly popular physical activity, which has been recommended for older adults and people with chronic disease. Second, despite the encouraging outcomes observed at the behavioral level, neural mechanisms underlying the promoted functions remain largely unknown (Voss et al., 2013). Neuroimaging (fMRI and MRI) and neuroelectric techniques (EEG) are the instruments that expand current knowledge on the correlates between neural plasticity and modified function. In this context, we aim to investigate three main issues: (1) Tai Chi-incurred benefits in older adults; (2) improved functions and corresponding changes in the brain; and (3) the direction of future study. To our knowledge, it is the first review to systematically investigate the benefits of Tai Chi exercise from the perspective of neural plasticity. With an increasing application of neuroimaging techniques, researchers should elevate the current study of interest from mere performance to neurological level.

Studies were eligible for inclusion if the following criteria were met: (1) subjects were healthy older adults or middle-aged adults (average age of Tai Chi group must be over 50); (2) Tai Chi was applied to exercise intervention; (3) brain imaging methods including MRI, fMRI, EEG, ERP etc. were used to assess variables of interest. The screening process consisted of two phases. First, two reviewers (XS & ZP) independently examined title, keywords, and abstracts of retrieved articles. In the second phase, a third author (QF) was responsible to deal with any disagreement between the reviewers.

Studies that failed to conform to one of the specified criteria were considered ineligible. To gain a comprehensive understanding of Tai Chi-related changes in the central nervous system of older adults, there were no restrictions on the types of studies. However, conference abstracts, review articles, monograph, and videos were excluded.

The methodological quality was assessed by Delphi list for quality assessment (Verhagen et al., 1998). To reduce the risk of bias in assessment, two reviewers (XS & ZP) independently scored the quality of the included articles. Inconsistencies between the two reviewers were solved after discussing with a third author.

Study characteristics encompass basic information of the selected articles, including author(s) of study and year of publication, study design, place of study, sample size and attribution rate, intervention frequency and duration, age of subjects, and measures. Age of subjects refers to the average group age, which should be above 50. Measures applied to the studies must include neuroimaging (fMRI or MRI) or neuroelectric techniques (EEG). Rationale, findings, and practical implications were summarized according to the purpose, results, and conclusions of the retrieved studies. 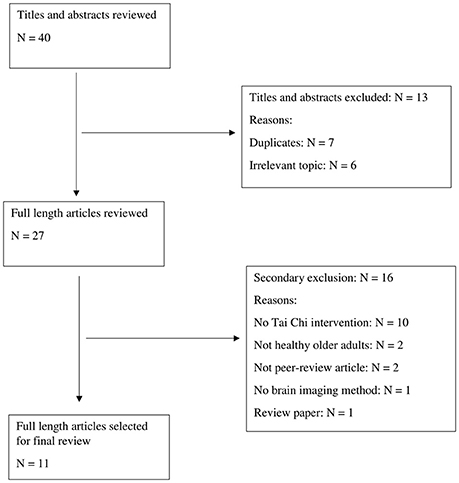 Effects of Tai Chi intervention on participants' neurological changes received an increasing attention in recent years as nine of the included studies (N = 11) were published in the past 5 years. China is the major country where relevant studies were conducted (N = 8) due to the prevalence of Tai Chi in the region. Subjects were mostly seniors. The average age of Tai Chi group in the studies ranged between 50.5 and 68.6 years. The study design included pre- and post-tests (N = 1), RCT (N = 5), and Quasi-experiment (N = 5). Seven studies compared the subjects' performance of Tai Chi group with that of control group before and after the intervention. The other four studies examined the difference between experienced Tai Chi practitioners and people with a relatively sedentary lifestyle.

Most of the included studies exhibited moderate (N = 5) to high (N = 5) quality of study design, with only one being categorized as low quality. Five cross-sectional studies aimed to identify different features between experienced Tai Chi practitioners and sedentary counterparts. Participants were recruited and allocated based on Tai Chi-related experiences and thus failed to meet the requirement of random allocation. For the studies without adopting intervention protocols, criterions such as similar at baseline (SB) and therapist blinded (TB) were not applicable to the studies (N = 5). Details of quality assessment are listed in Table 2.

Summary of the studies involved with four categories of interest regarding the impacts of Tai Chi on brain structures, functional connectivity, neural activity, and electric activity. Details of the summarized evidence are displayed in Table 1.

One study examined the differences in the brain structures between experienced Tai Chi practitioners and people lacking routine exercise. MRI image identified thicker cortex in the left and right hemisphere of long-term Tai Chi practitioners in comparison to the cortical regions of people with a sedentary lifestyle. The study suggested that cortex thickness in the left medial occipitotemporal sulcus and lingual sulcus is subject to the intensity of Tai Chi practice (Wei et al., 2013).

Tai Chi-induced benefits in cognitive function were observed after elderly participants receiving a 6-week multimodal intervention, which consisted of Tai Chi exercise, group counseling, and cognitive training. Changes in functional connectivity included enhanced rsFC between the medial prefrontal cortex and the medial temporal lobe (Li et al., 2014). Given the fact that Tai Chi was the only form of physical activity in the intervention program, it is reasonable to assume that, to a certain extent, Tai Chi exercise contributed to the enhanced functional connectivity in correlation to improved cognitive performance.

Liu et al. (2003) investigated spontaneous brain activity of Tai Chi experts and novices during practice. Experts indicated a significantly higher alpha-wave amplitude than novices in eye-close resting and recovery period, suggesting that the experts could quickly and effectively reach a psychological relaxation. Also, the experts exhibited a higher beta-wave amplitude than novices, implying that experts tend to be more physiologically excited than novices throughout the practice. Experts indicated well-developed mind concentration capacity, which was evident in the alpha shift tendency from occipital lobe to central or frontal regions.

Older adults experience reduced hemispheric asymmetry due to age-related deficits in neural connectivity (Cabeza, 2002). Evidence from fMRI scan indicated symmetric brain activations when older adults were performing cognitive tasks (Grady, 2000). A recent study involved with older adults also identified reduced asymmetry in movement patterns between dominant and non-dominant hand, suggesting a potential connection to the reduced hemispheric asymmetry (Przybyla et al., 2011). However, the theory remains to be an assumption without direct evidence from a study, which applies fMRI to motor tasks. By investigating the change in motor performance, whether it is associated with age-related degeneration or Tai Chi-incurred improvement, researchers can better understand neural mechanisms underlying the aging process.

The lack of robust empirical research on Tai Chi-incurred changes for older adults is a limitation of the review. The inherent risk of bias in the study design, paired with the limited literature, suggests the necessity of an increasing number of RCTs in this field. Only two of the included studies reported effect size, which makes it difficult to compare the effectiveness between studies. Future research should report the effect size so that critical conclusion can be reached based on statistical evidence.

The literature review summarized 11 studies, which employed neuroimaging techniques and EEG to investigate effects of Tai Chi on hemispheric reorganization. The reviewed articles provide evidence that there may be cognitive improvement associated with modified brain activity, functional connectivity, and brain structures in older adults through Tai Chi exercise. Future studies should account for the potential connection between changed motor functions and corresponding neural mechanisms underlying the aging process. RCTs are needed to provide powerful evidence on the effect of Tai Chi intervention. In contrast to previous research focusing on performance, future studies should analyze the effects of intervention from the neurological standpoint. Applying neuroimaging techniques and EEG to Tai Chi intervention is worth investigating, which allows researchers to explore the neural mechanisms related to the effectiveness of Tai Chi exercise on counteracting the aging process.

Copyright © 2018 Pan, Su, Fang, Hou, Lee, Chen, Lamberth and Kim. This is an open-access article distributed under the terms of the Creative Commons Attribution License (CC BY). The use, distribution or reproduction in other forums is permitted, provided the original author(s) and the copyright owner are credited and that the original publication in this journal is cited, in accordance with accepted academic practice. No use, distribution or reproduction is permitted which does not comply with these terms.

Sensory-Motor Aspects of Nervous Systems Disorders: Insights from Biosensors and smart technology in the dynamic assessment of disorders, their progression, and treatment outcomes