p58IPK Is an Endogenous Neuroprotectant for Retinal Ganglion Cells

p58IPK is an endoplasmic reticulum (ER)-resident chaperone playing a critical role in facilitating protein folding and protein homeostasis. Previously, we have demonstrated that p58IPK is expressed broadly in retinal neurons including retinal ganglion cells (RGCs) and loss of p58IPK results in age-related RGC degeneration. In the present study, we investigate the role of p58IPK in neuroprotection by in vitro and in vivo studies using primary RGC culture and two well-established disease-relevant RGC injury models: retinal ischemia/reperfusion (I/R) and microbead-induced ocular hypertension. Our results demonstrate that in both in vivo models, p58IPK −/− mice exhibit significantly increased RGC loss compared to wild type (WT) mice. In vitro, p58IPK-deficient RGCs show reduced viability and are more susceptible to cell death induced by the ER stress inducer tunicamycin (TM). Overexpression of p58IPK by adeno-associated virus (AAV) significantly diminishes TM-induced cell death in both WT and p58IPK −/− RGCs. Interestingly, we find that loss of p58IPK leads to reduced mRNA expression, but not the protein level, of mesencephalic astrocyte-derived neurotrophic factor (MANF), a neurotrophic factor that resides in the ER. Treatment with recombinant MANF protein protects R28 retinal neural cells and mouse retinal explants from TM-induced cell death. Taken together, our study suggests that p58IPK functions as an endogenous neuroprotectant for RGCs. The mechanisms underlying p58IPK’s neuroprotective action and the potential interactions between p58IPK and MANF warrant future investigation.

In the present study, we tested this hypothesis in two commonly used RGC injury models induced by retinal ischemia/reperfusion (I/R) or ocular hypertension and explored the potential mechanism of p58IPK neuroprotection and its interaction with mesencephalic astrocyte-derived neurotrophic factor (MANF), an ER stress responsive neurotrophic factor.

The generation and maintenance of p58IPK knockout mice were previously described elsewhere (Ladiges et al., 2005; Boriushkin et al., 2015). All experimental procedures were performed in compliance with protocols approved by the Institutional Animal Care and Use Committees at the State University of New York at Buffalo.

Isolation and Culture of Mouse RGCs

The anterior chamber of anesthetized mice was canulated with a 30g needle attached to a reservoir of sterile PBS. Retinal ischemia was induced by elevating the reservoir to generate a hydrostatic pressure of 90 mmHg for 60 min. After 7 days, mice were sacrificed and retinal whole-mounts were prepared for Tuj1 immunostaining to visualize RGCs (see Supplementary Material).

The quantitative data were expressed as mean ± SD. Statistical analyses were performed using Student’s t-test for two-group comparisons and one-way ANOVA with Bonferroni post hoc test for three groups or more. Statistical differences were considered significant at a p value of less than 0.05.

We first examined overall retinal morphology of young adult p58IPK −/− and wild type (WT) mice using a variety of retinal cell type specific markers. We found that there was no significant difference in retinal expression of PKCα, Pax6, ribeye, or calretinin in p58IPK −/− and WT mice (Figure 1A). The retinal layer thickness was identical in these mice (not shown). We conclude that the retinas of p58IPK −/− mice were morphologically indistinguishable from WT at the ages we performed the retinal injury interventions described below. 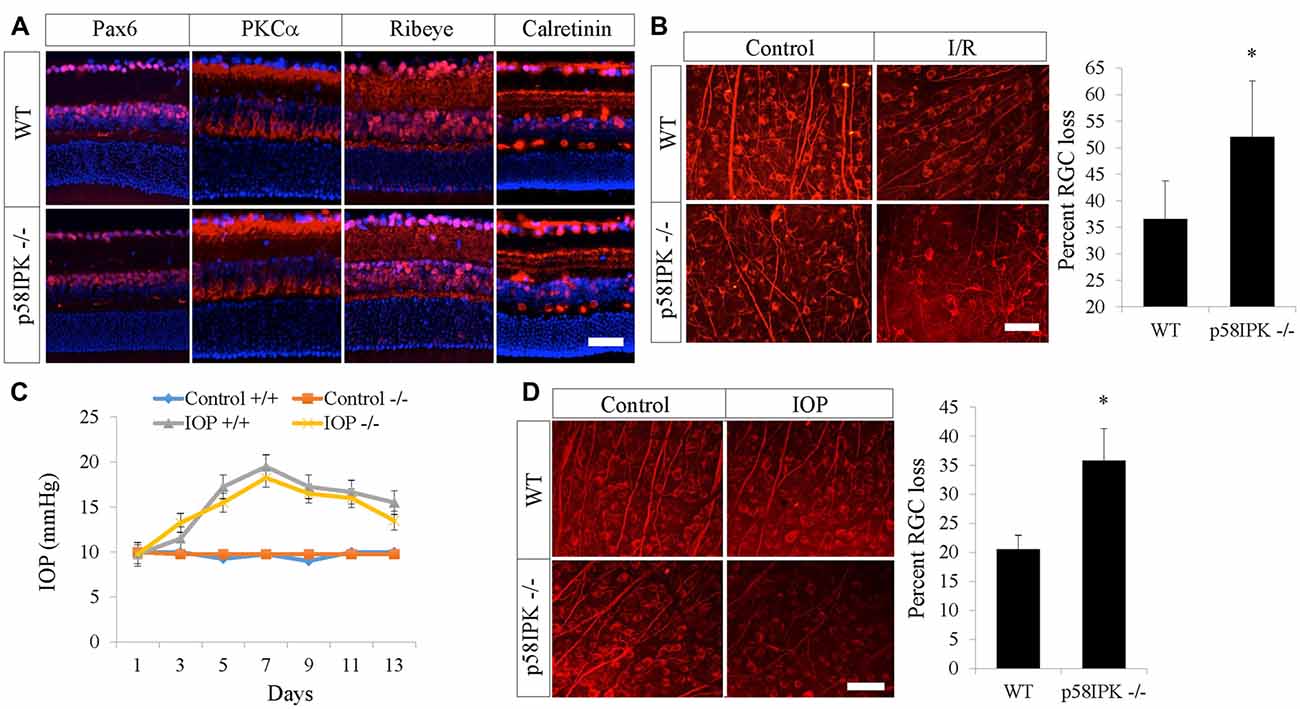 Retinal I/R is a widely used model for investigating the mechanisms and treatment of inner retinal neuron injury caused by acute ischemia. Seven days after I/R, RGC numbers were examined by immunostaining for Tuj1, a putative RGC marker, in retinal whole mounts. We found a 36.6% RGC loss in WT mice and a 52.0% RGC loss in p58IPK −/− mice (Figure 1B). This indicates that I/R induced a significantly higher rate of RGC loss (a 42% increase) in p58IPK −/− mice than in WT, suggesting a protective role of p58IPK in RGCs.

We used a second model that is highly relevant to glaucoma to validate the role of p58IPK in RGC protection. We found no significant difference in IOP elevation after microbead injection in p58IPK −/− and WT mice (Figure 1C). Two weeks after induction, WT retinas with increased IOP exhibited a 20% loss of RGCs; the percentage of RGC loss increased significantly to over 35% in p58ipk −/− mice (Figure 1D). This again indicates that a loss of p58IPK results in an increase in RGC death.

Next, we examined whether overexpressing p58IPK by AAV is sufficient to protect primary mouse RGCs isolated from p58IPK −/− and WT mice. Under control conditions, we found that the percentage of RGCs survival in culture was significantly decreased in p58IPK −/− RGCs compared to WT (Figure 2A), although this decrease was not rescued by acute overexpression of p58IPK. TM exposure caused a significant loss of cells in both p58IPK −/− and WT RGCs infected with control virus (Figure 2A). Overexpressing p58IPK led to a significant recovery to near control levels of survivability in both WT and p58IPK −/− RGCs. 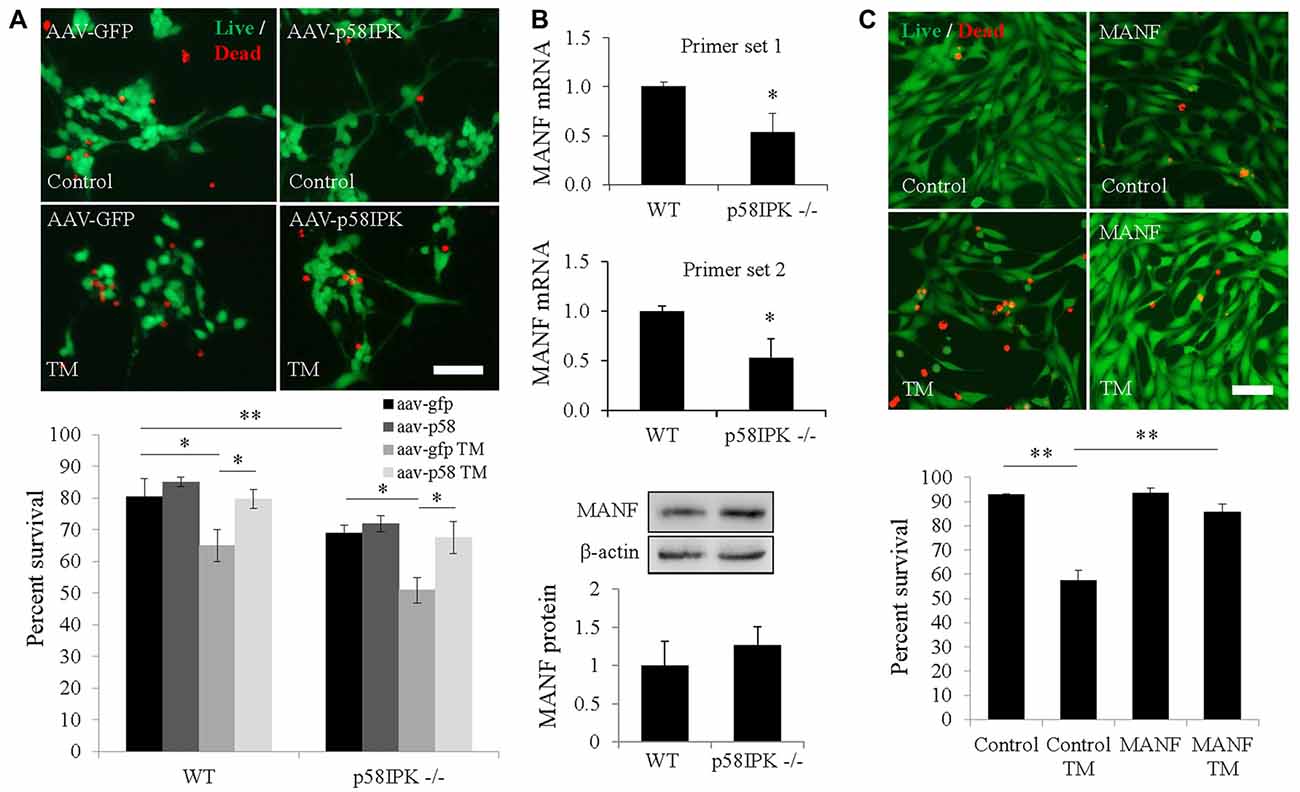 MANF is a member of a newly identified ER-localized neurotrophic factor family and is upregulated during ER stress (Glembotski et al., 2012). We investigated whether MANF expression is altered in p58IPK −/− retinas. Using qPCR, we found that MANF mRNA expression was significantly reduced in the retina of p58IPK −/− mice (Figure 2B). However, the protein level appeared to be insignificantly different (Figure 2B). To further explore whether there is a reciprocal regulation between p58IPK and MANF, we transduced R28 cells with adenovirus to overexpress p58IPK and then treated the cells with TM to induce ER stress. We found that both MANF and p58IPK levels were significantly increased after TM treatment (Supplementary Figure S1A). Overexpression of p58IPK did not alter MANF protein expression in unstimulated cells, but significantly reduced the induction of MANF by TM (Supplementary Figure S1A).

To examine whether MANF is important for neuronal survival under ER stress, we pretreated R28 cells with 50 ng/ml recombinant hMANF protein or vehicle (0.1% PBS) followed by treatment with 5 μg/ml TM, or vehicle, for 24 h. We find TM treatment induces cell death in 43% of R28 cells in the absence of MANF treatment (Figure 2C). With MANF pretreatment, this number was reduced to 16%, which represents a recovery to 91% of the survival rate of control R28 cells treated with vehicle (Figure 2C). In addition, MANF treatment significantly reduced TM-elicited caspase-3 activation in ex vivo cultured retinal explants (Supplementary Figure S1B).

The findings from the present study provide strong evidence for an endogenous role of p58IPK in protection of RGCs in conditions of ER stress, acute ischemia and ocular hypertension. Previous studies, including our own, have implicated p58IPK in a broad range of neurodegenerative diseases and diabetes (Ladiges et al., 2005; Boriushkin et al., 2014, 2015, 2016; Han et al., 2015; McLaughlin and Zhang, 2015). Clinically, patients bearing loss-of-function mutations in the DNAJC3 gene, which encodes p58IPK, suffer from diabetes and multisystemic neurodegeneration (Synofzik et al., 2014). In animal models, loss of p58IPK results in increased ER stress and oxidative stress, decreased β cell function, progressive cell death and diabetes in male p58IPK KO mice (Ladiges et al., 2005; Han et al., 2015). In contrast to the relatively thoroughly studied role of p58IPK in diabetes, how p58IPK regulates neuronal function remains unexplored. Herein, we examined the impact of p58IPK deficiency on RGC survival in disease-relevant models. Our data clearly indicate an important role of p58IPK in RGC survival during acute retinal ischemia and in ocular hypertension. Notably, we used young adult p58IPK KO mice that demonstrate no significant morphological defects in the retina compared to their age-matched littermate controls. In addition, most of our experiments were carried out in female mice at 2 months of age, which do not experience increased blood glucose levels as some male p58IPK KO mice do with age.

Our in vitro results suggest a therapeutic potential of overexpressing p58IPK or enhancing its function for neuroprotection of RGCs, which warrants an in vivo study in disease models. Another interesting finding is that there is likely a reciprocal regulation between p58IPK and MANF in retinal cells undergoing ER stress. Recent studies show that MANF protects CNS neurons (Voutilainen et al., 2017) and markedly improves RGC survival in a rat glaucoma model (Gao et al., 2017). Our data support these findings and demonstrate that MANF inhibits ER stress-induced cell death and caspase-3 activation in retinal cells and explants. In R28 cells, both p58IPK and MANF are upregulated during ER stress; interestingly, overexpressing p58IPK reduces ER stress-stimulated MANF upregulation. This suggests a potential interaction between the two chaperones, which both bind to GRP78 and regulate the UPR, although it remains unclear whether MANF secretion is affected by p58IPK manipulation. Future studies will investigate how MANF and p58IPK are regulated in RGCs and whether overexpression of p58IPK and MANF would synergistically promote RGC survival and function.

This work was supported by National Institutes of Health/National Eye Institute (NIH/NEI) grants EY019949 and EY025061, and an Unrestricted Grant to the Department of Ophthalmology, SUNY-Buffalo, from Research to Prevent Blindness.

The Supplementary Material for this article can be found online at: https://www.frontiersin.org/articles/10.3389/fnagi.2018.00267/full#supplementary-material

Copyright © 2018 McLaughlin, Dhimal, Li, Wang and Zhang. This is an open-access article distributed under the terms of the Creative Commons Attribution License (CC BY). The use, distribution or reproduction in other forums is permitted, provided the original author(s) and the copyright owner(s) are credited and that the original publication in this journal is cited, in accordance with accepted academic practice. No use, distribution or reproduction is permitted which does not comply with these terms.