Recent studies suggest that accelerated aging of the brain is a neuroanatomical signature of the state of mental diseases. In major depression, this pre-aging effect is negatively associated with the duration since the first onset of the disease. The olfactory bulb (OB) shrinks with age in healthy subjects and patients with mental diseases show reduced OB volumes, especially those with major depression. It is unclear whether this OB reduction in mental diseases resembles a pre-aging process and whether it is associated to the duration since the onset of the mental disease. To this aim, we investigated OB volume in 73 patients (mean-age 40.4 years, SD = 12.1 years, 57 women) with major depression and mixed comorbid mental diseases (diagnoses ranged from 1 to 6, median: 3) and 51 healthy controls (mean-age 39.2 years, SD = 13.0 years, 26 women) matched for age and sex. Patient’s first onset of disease ranged from 15 to 53 years (mean 24.2 years). All participants underwent structural MR imaging with a spin-echo T2-wheighted sequence covering the anterior and middle segments of the skull base. All results were corrected for total intracranial volume (TIV) and sex. Individual OB volume was calculated by planimetric manual contouring and the pronounced diameter change in transition from bulb to tract was used as the distal demarcation of the OB. Inter-rater correlation between two independent persons analyzing the data was high (IRC = 0.81, p < 0.005). An age-dependent decline of the OB volume was confirmed in healthy controls (r = −0.34, p < 0.05). However, this pattern was altered in patients where the OB volume was not related to age, but to the duration since the onset of the mental disease (r = −0.25, p < 0.05). This association remained stable when controlling for age. Additionally, analyses of age sub-groups revealed that the association between duration since the onset of the mental disease and OB volume was mainly driven by the group aged 50 years and above (r = −0.68; p < 0.01). We conclude that there are time windows where the OB volume is susceptible for the effects of a mental disease, e.g., depression. These effects result in cumulative pre-aging in the OB in older patients with mental diseases.

Throughout human life, the brain’s neural architecture undergoes a steady transformation. Whereas the early years from birth to adolescence are determined by the interplay of neural growth and differentiation (Shaw et al., 2008), adulthood is mostly characterized by depletion (Fjell et al., 2013). Especially after midlife, brain weight (Skullerud, 1985) and whole brain volume decrease (Scahill et al., 2003; Hedman et al., 2012) and equally the volume of most brain structures shrinks with increasing age (Allen et al., 2005; Raz and Rodrigue, 2006). Accordingly, the olfactory bulb (OB) shows its peak volume around the age of 40 years from where it linearly decreases with age (Buschhüter et al., 2008). In line with this, olfactory functioning shows the same trajectory, peaking around the age of 40 years decreasing thereafter (Buschhüter et al., 2008). Most investigation of the aging brain are based on the frontal cortex and hippocampus (Fjell et al., 2014), showing that over the life span both regions are particularly vulnerable to age and undergo comparable decline in GM volume (Fjell et al., 2014).

Table 1. Descriptive characteristics of the patient and control group.

The study followed the Declaration of Helsinki on Biomedical Research Involving Human Subjects and was approved by the local Ethics Committee (EK 51022015). All participants provided written informed consent.

Based on manual segmentation of the acquired T2-weighted coronal data, all OB volumes were calculated by the same experimenter (FR) blinded to the diagnosis of the participant. The pronounced diameter change in transition from bulb to tract was used as the proximal demarcation of the OB. On each coronal slice, right and left OB’s shape was outlined manually and OB volumes were calculated by planimetric manual contouring (surface in mm2). All surfaces were then added and multiplied by 2 (2-mm slice thickness) to obtain an estimated overall volume (compare Figure 1). The volume of the left and right OB was calculated for each participant. The larger of the two volumes was then used for all further analyses. Hence the term OB volume refers to “best OB volume.” This approach of calculating and analyzing OB volumes has previously shown to be highly reliable and accurate (Yousem et al., 1997; Hummel et al., 2015). Inter-rater correlation between two independent persons analyzing the OB volume was high (IRC = 0.81, p < 0.005). 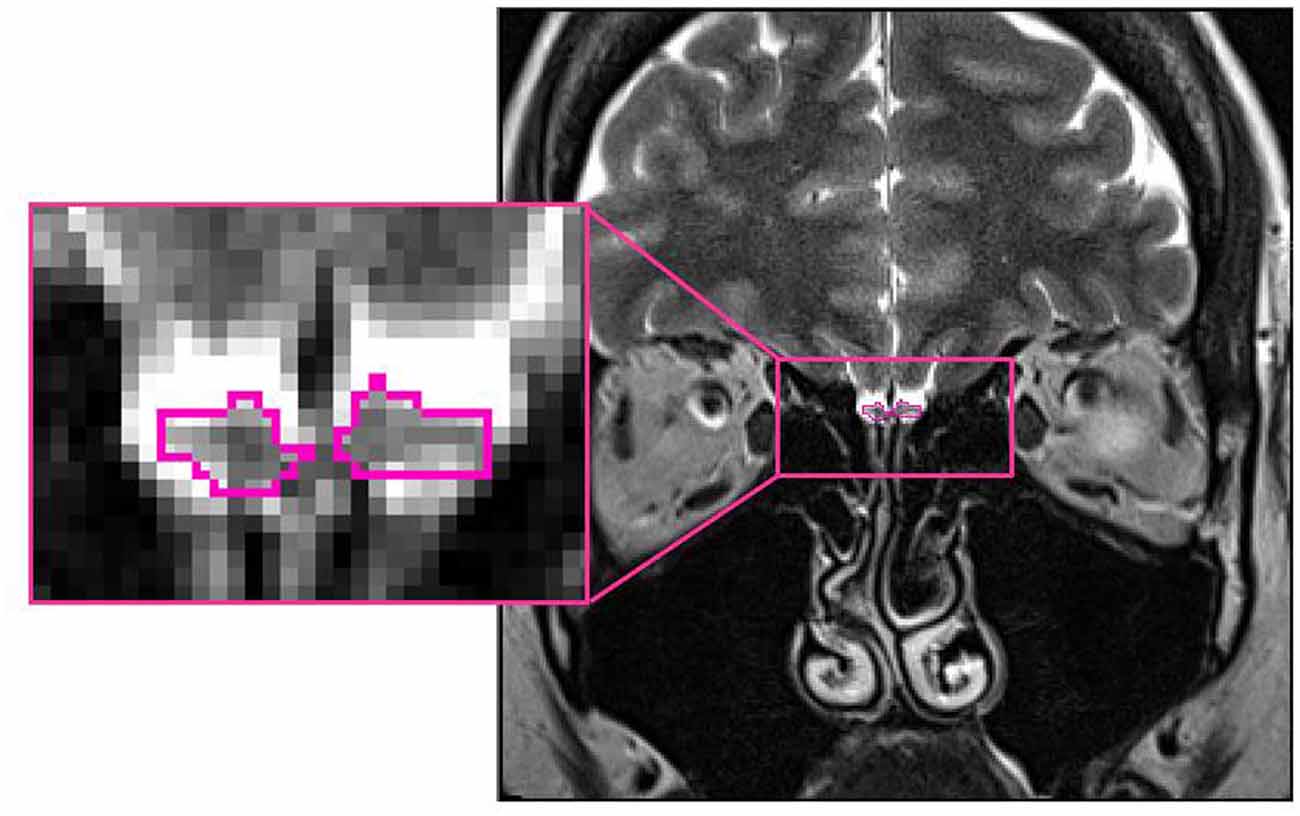 Pearson-correlation coefficients were computed in healthy controls and depressed patients separately to assess associations between age and OB volume. In depressed patients Pearson-correlation coefficients for the association between OB volume and the duration since the first onset of mental disease were computed and additionally controlled for age. The first onset of mental disease was taken from the documentations of the structured anamnestic interviews (German version of the SCID-I; Wittchen, 1997) where a detailed inquiry of episodes of mental disease is essential.

Furthermore, we divided the group of depressed patients into three different age groups of young (18–34 years), middle-aged (35–49 years) and old (above 50 years) individuals. For every group we computed Pearson-correlation coefficients for the association between OB volume and the duration since the first onset of the mental disease separately.

All analyses were controlled for six medical conditions (medication in general, Antidepressants, Neuroleptics, Antiepileptics, Soporifics/Tranquilizer, other drugs) by introducing them sequentially as confounding variables in a partial correlation design.

All analyses were controlled for six medical conditions (medication in general, Antidepressants, Neuroleptics, Antiepileptics, Soporifics/Tranquilizer, other drugs) by introducing them sequentially as confounding variables in a partial correlation design. 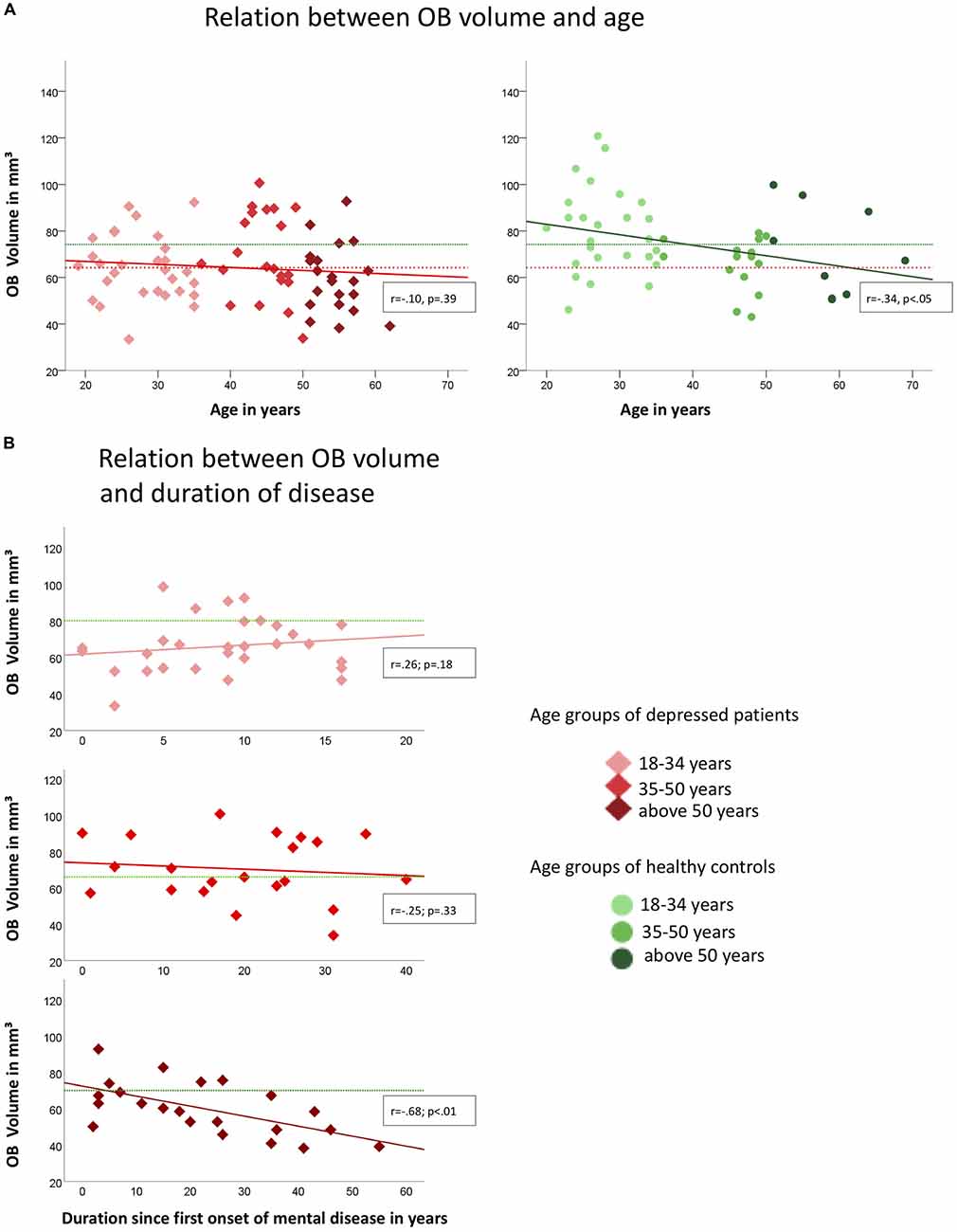 An age-dependent decline of the OB volume had been shown in healthy people (Yousem et al., 1998; Buschhüter et al., 2008). However, this pattern was altered in patients where OB volume was not related to age, but to the duration since the first onset of the mental disease.

In detail, the OB volume showed accelerated decrease with the duration of the mental disease in patients of the oldest age-group in the sample. Notably, the data suggests that this acceleration was evident after about 5 years of duration of the mental disease. No such association was found for the middle-aged subgroup. The youngest patient sub-group showed highly reduced OB volumes compared to the respective healthy control group. However, this group still showed a trend towards an increase of the OB volume over time which can also be seen in healthy controls at this age in other studies (Yousem et al., 1998; Buschhüter et al., 2008). We conclude that there are time windows where the OB volume is susceptible for the effects of depression, namely the young and the old age. This is in line with the observation of developmental time windows of the human brain (Lupien et al., 2009) which implies that certain brain areas show increased vulnerability during specific development stages.

Two mechanisms are possible here: (a) reduced OB volume could be a pre-existing factor of the mental disease and hence indicate increased vulnerability for a mental disease (as already formulated by Croy and Hummel, 2017); and (b) The OB volume reduction could be the consequence of the mental disease. In line with the vulnerability hypothesis, the data shows that patients of the youngest age group exhibit reduced OB volumes compared to healthy controls. On the other hand, the very same result can also be interpreted as a consequence of reduced OB volume growth which happens during this time window in healthy individuals and seems diminished in patients with depression. Furthermore, the results of the group of older patients are in favor of the consequence hypothesis: in healthy aging, the OB volume starts to decrease at the age of about 40 years (Buschhüter et al., 2008). The manifestation of a mental disease increases those normal aging effects. Also known as the neurotoxicity hypotheses, this theory suggests that a long-term increase of individual stress levels leads to prolonged exposure to glucocorticoids which reduces the ability of neurons to resist insults, increasing the rate at which they are damaged by other toxic challenges or ordinary attrition (Lupien et al., 2009). In patients aged 35–49 years however, the absence of a relation between depression and OB volume could be interpreted as a higher resilience to damage of the OB during middle-age.

To sufficiently explore which of the provided theories best explains the association between OB volume reduction and depression, long-term studies are necessary. It is possible that both mechanisms—preterm aging as a consequence of depression and increased vulnerability—could work together in a vicious circle and hence are not mutually exclusive (Lupien et al., 2009; Croy and Hummel, 2017): exposure to stress during developmental periods of certain brain regions might alter their development and lead to increased vulnerability to mental disorders (de Kloet et al., 2005; Cohen et al., 2006), e.g., depression. On the other hand long-term exposure to stress during periods of mental disease could also affect brain organization (Frodl et al., 2008). For the OB that would mean cumulative volume reduction that accelerates the decline seen in older individuals.

There are two major limitations when interpreting the results: (1) the presented data is cross-sectional. To sufficiently explore aging trajectories, longitudinal designs are necessary; and (2) The group sizes of the investigated age-sub-groups are rather small. Hence, the interpretations of the results concerning those sub-groups should be treated with care. Investigations in larger cohorts are necessary to finally confirm or disprove the divided interpretations.

The Supplementary Material for this article can be found online at: https://www.frontiersin.org/articles/10.3389/fnagi.2018.00354/full#supplementary-material

Copyright © 2018 Rottstaedt, Weidner, Hummel and Croy. This is an open-access article distributed under the terms of the Creative Commons Attribution License (CC BY). The use, distribution or reproduction in other forums is permitted, provided the original author(s) and the copyright owner(s) are credited and that the original publication in this journal is cited, in accordance with accepted academic practice. No use, distribution or reproduction is permitted which does not comply with these terms.

Community Series in Individualized Assessment of Brain Aging across the Lifespan: Applications in Health and Disease - Volume I