Background: Type 2 diabetes mellitus (T2DM) is considered as an independent risk factor for mild cognitive impairment (MCI). This study was performed to investigate the prevalence, influencing factors and cognitive characteristics of MCI in elderly patients with T2DM in China.

Methods: In the cross-sectional study, we performed cluster random sampling of 3,246 people age 60 years and older across the country. All participants were interviewed and screened for T2DM and MCI. A total of 341 subjects were diagnosed of MCI according to the criteria of Petersen, and a total of 256 subjects were diagnosed of T2DM by using the American Diabetes Association criteria Among the 256 T2DM people, 56 were also diagnosed with MCI. Logistic regression analyses were performed to evaluate risk and protective factor for MCI with T2DM. We also assessed their cognitive function by using the Mini-mental State Examination (MMSE), Montreal Cognitive Assessment (MoCA), Digit span, Associative Learning Test (ALT), Visual Identification Test (VIT), Verbal Fluency (VF), Wechsler Adult Intelligence Scale (WAIS)-III Block Design, WAIS-III picture completion and Auditory Verbal Learning Test (AVLT).

Conclusions: The present study suggests a high prevalence of MCI among Chinese T2DM patients. Depression is a risk factor for MCI, while education is a protective one. T2DM patients with MCI often show comprehensive cognitive impairment, and the drug treatment of diabetes might help to improve cognitive function.

Type 2 diabetes mellitus (T2DM) is a common metabolic disorder characterized by high blood sugar, insulin resistance, and a relative lack of insulin (Yang et al., 2018). A recent meta-analysis (Yang et al., 2016) pointed out that the overall prevalence (9.1%) of T2DM in China has been increasing since the 1970s, and it increased rapidly with age. In addition to the well-known connection between T2DM and peripheral nervous system disease, diabetes may also cause damage to the central nervous system. What’s more, patients with T2DM generally show worse cognitive performance (Kodl and Seaquist, 2008) and a higher risk of dementia (Arvanitakis et al., 2004; Smith et al., 2010).

Mild cognitive impairment (MCI) is a transitional and possibly modifiable stage between normal cognitive aging and dementia (Petersen, 2011). Compared to healthy individual, people with MCI often have an increased risk to develop dementia (Petersen et al., 1999). Previous studies suggest that T2DM is not only a risk factor for MCI, but also promotes the transformation of MCI into dementia (Cukierman et al., 2005; Li et al., 2016). Therefore, early treatment of T2DM in patients with MCI is critical for improving their prognosis (Cholerton et al., 2016; Xu et al., 2016).

China’s population accounts for 21% of the world population and 1/3 of the Asian population. However, few studies have examined the prevalence of MCI in Chinese T2DM patients [we only found one such study (Gao et al., 2016), but their conclusions are not representative of the country]. So we conduct this national study to explore the prevalence, influence factors and cognitive characteristics of MCI in T2DM among Chinese community elderly.

The China Longitudinal Aging Study (CLAS) is a population-based cohort that is studying randomly sampled participants living in the city communities in China. For a detailed description of the study design, see Xiao et al. (2013). Briefly, 3,246 participants aged 60 years or more from all over the country underwent a baseline examination including a review of their medical history, physical and neurological examinations, laboratory tests, and magnetic resonance imaging (MRI) scans. The recruitment procedure yielded an almost representative sample for the respective communities. The following data, such as name, gender, age, education and daily living information (hobby, dietary preferences, sleeping patterns, smoking history, consumption of tea and alcohol and physical activities) were also collected by standardized questionnaire.

Of the original 3,246 elderly subjects, 389 participants were excluded for the incomplete data; 1,331 people were excluded because they did not meet the diagnostic criteria for MCI or normal cognitive elderly; Among those MCI patients (n = 341) and normal people (n = 1,185), there were also 256 people (T2DM-MCI, n = 56; T2DM-normal, n = 200) were diagnosed with diabetes. Figure 1 presents an overview of the study design and sampling procedures.

Figure 1. FLow diagram of the study population in the project.

Ethical approval was obtained from Shanghai Mental Health Centre, and all the participants had signed an informed consent before the study was initiated.

Diabetic status was based on self-reported physician’s diagnosis or treatment with insulin and/or oral hypoglycemic agents. Individuals were also considered to have T2DM if their fasting serum glucose level was ≥7.0 mmol/L (126 mg/dl) or their 2-h value in an oral glucose tolerance test was ≥11.1 mmol/L (200 mg/dl; Gao et al., 2015). Finally, 256 participants were considered to have T2DM.

A diagnosis of MCI was based on the following criteria, which were adapted from the MCI diagnostic criteria of Petersen (Portet et al., 2006): (1) memory complaint, preferably corroborated by an informant; (2) objective memory impairment; (3) preservation of general cognitive function; (4) intact activities of daily living; and (5) absence of dementia. Finally, we found that there were 341 MCI patients in the whole population (n = 2,857), so the prevalence of MCI in the study population was 11.9%. Of 256 T2DM subjects, 56 subjects were diagnosed with MCI, so the prevalence of MCI among T2DM patients was 21.8% Therefore, we concluded that the prevalence of MCI in diabetic patients was significantly higher than that in normal population (Pearson x2 = 20.861, p < 0.001).

Statistical analysis was performed by using SPSS version 17.0. The continuous variable and categorical variables were presented as mean ± SD and frequency (%), respectively. All continuous data were tested for normally with the Kolmogorov-Smirnov test. Comparison of continuous data among groups was performed with the single factor analysis of variance (ANOVA) analysis and the results were corrected by using Bonferroni correction. The chi-square test was used for comparison of categorical data. Multiple logistic regression analysis was used for screening the risk and protective factors of MCI. A P-value < 0.05 was considered to be significant.

Table 2. Risk and protective factors for MCI in T2DM patients. 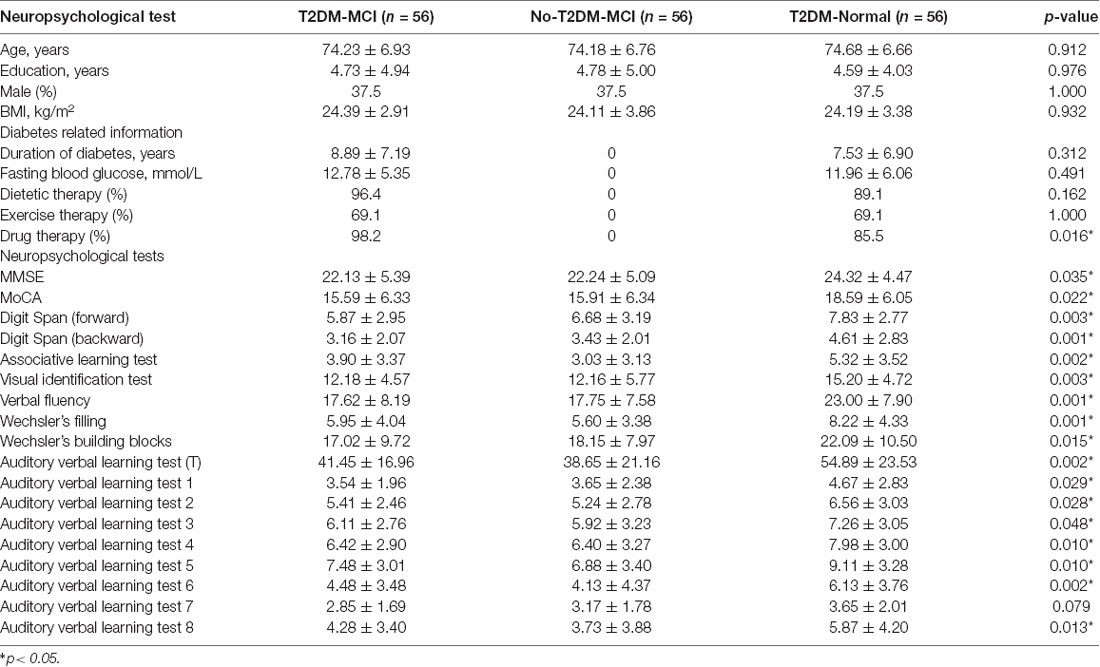 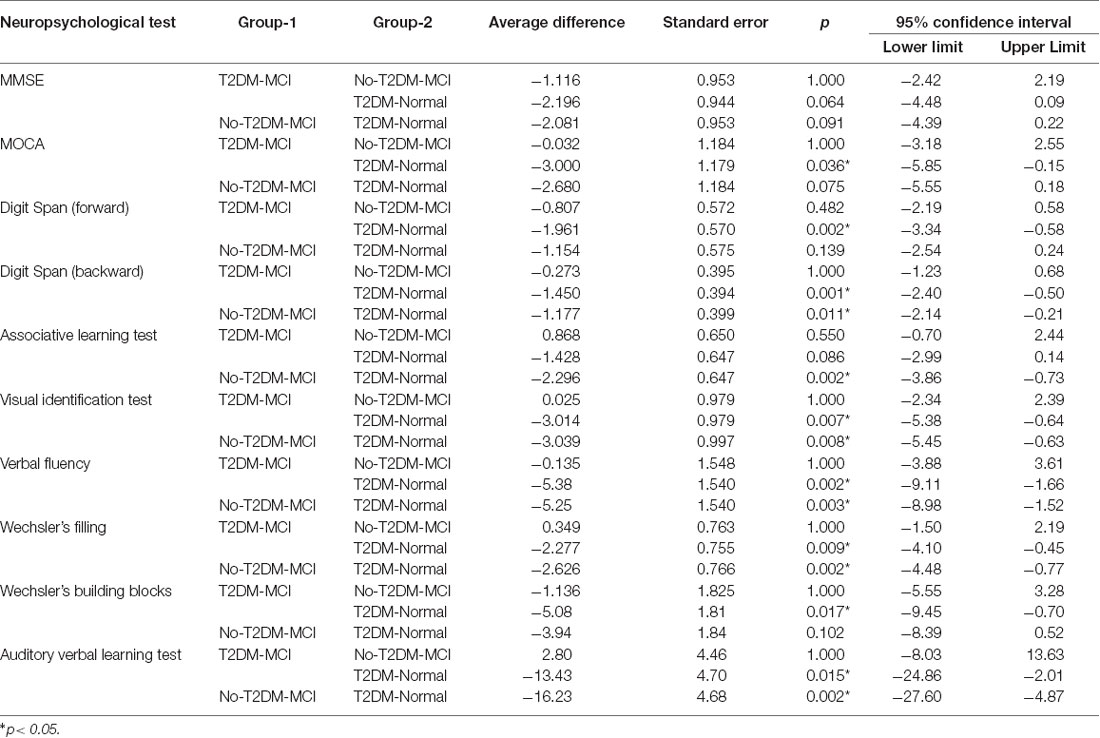 Table 5. Factors that might affect the score of the auditory vocabulary learning tests.

Our report presents the results of a national cross-sectional study that examined the prevalence, risk and protective factor as well as cognitive characteristics of MCI in a population of Chinese elderly patients with Type 2 diabetes. And this study revealed several interesting findings: (1) there was a very high prevalence of MCI among Chinese elderly with Type 2 diabetes; (2) depression was a risk factor for the development of MCI in patients with diabetes, while education was an important protective factor; (3) both overall and specific areas of cognitive function would decline in T2DM patients with MCI, but for patients with MCI, T2DM had no effect on cognitive function; and (4) promptly treating diabetes with drugs might improve the cognitive status of diabetics.

Like other organs, the brain will also undergo significant structural and functional changes (such as increased neuron loss, decreased synaptic density, declined energy production, disordered synaptic signaling and destructed protein homeostasis) with increasing age (Berchtold et al., 2008; Kohama et al., 2012). And cognitive functioning declines much faster among individuals with MCI than normal cognitive elderly (Cheng and Xiao, 2014). Inconsistent with many other studies (Li et al., 2013; Wang et al., 2017), we did not find that advanced age were a risk factor for MCI, and the difference might be due to the limited sample size.

Depression symptoms occur very commonly in people with MCI and the co-morbidity rate is about 44% (Panza et al., 2010). Previous studies suggest that depression will promote the transformation of MCI into dementia (Barnes and Yaffe, 2011; Van der Mussele et al., 2014). In the present study, we also found that depression was a risk factor for developing MCI. There are several mechanisms that might be used to explain the above phenomenon, first, depression symptoms might increase the burden of amyloid in the cerebral cortex (especially precuneus, parietal, temporal, and occipital regions; Yasuno et al., 2016); second, depression symptoms might alter serotonin metabolism and reduce synaptic plasticity by increasing pro-inflammatory cytokines, such as interleukin-1 and tumor necrosis factor-α (TNF-α; You et al., 2011); third, the concentration of BDNF in the brain of patients with depression is often significantly decreased, which might have a negative impact on the maintenance of neuronal homeostasis and modulation of synaptic plasticity (Lu et al., 2013).

In addition, we also assessed the cognitive function of patients with diabetes. Compared with T2DM patients with normal cognitive function, T2DM patients with MCI showed a decline in both general and specific cognitive fields (Tables 3, 4). Previous study indicated that type 2 diabetes was associated with impairment of episodic memory and decreased executive function (including working memory, VF, processing speed, cognitive flexibility and cognitive control; McCrimmon et al., 2012; Yaffe et al., 2016), so our conclusions are consistent. By using partial correlation analysis (controlling for age, gender and education), we found that only the total score of AVLT was related to diabetes. And the results of linear regression suggested drug therapy (for diabetes) was associated with better cognitive performance (t = 2.263, p = 0.025). However, we did not find any negative effect of diabetes on cognitive function in MCI patients. Since this was only a cross-sectional study, further research was needed on the relationship between T2DM and MCI.

There are several limitations to our study. First, this was only a cross-sectional study, and a causal relationship between cognition and T2DM could not be concluded. Second, we did not specifically discuss the relationship between the different subtypes of MCI and cognitive function. Third, longitudinal data from larger samples was needed to verify the above conclusions.

Ethical approval was obtained from Shanghai Mental Health Centre, and all the participants had signed an informed consent before the study was initiated.

This work was supported by grants from the National Natural Science Foundation of China (number 81671402) and China Ministry of Science and Technology (2009BAI77B03).

Copyright © 2019 Li, Sun, Li and Xiao. This is an open-access article distributed under the terms of the Creative Commons Attribution License (CC BY). The use, distribution or reproduction in other forums is permitted, provided the original author(s) and the copyright owner(s) are credited and that the original publication in this journal is cited, in accordance with accepted academic practice. No use, distribution or reproduction is permitted which does not comply with these terms.

† These authors have contributed equally to this work