Background: Gallstone disease (GD) is associated with a high risk of cardiovascular disease. However, it is unknown whether GD contributes to atrial fibrillation (AF). We aimed to investigate the association between GD and AF.

Methods: We performed a population-based cohort study using data from the Taiwan National Health Insurance Research Database between 2001 and 2011. A GD cohort of 230,076 patients was compared with a control cohort consisting of an equal number of patients matched for age, sex, cardiovascular and gastrointestinal comorbidities.

Conclusion: This population-based longitudinal follow-up study showed that patients with GD had an increased AF risk. Moreover, cholecystectomy was related to reduced AF risk. Cardiovascular checkups may be necessary for patients with GD, especially those who are young and have other typical risk factors.

Atrial fibrillation (AF) is the most common sustained cardiac arrhythmia in adults. Although AF prevalence varies among ethnic populations, its prevalence progressively increases with advancing age. It occurs in <1% of individuals aged 60–65 years but in 8% to 10% of individuals aged >80 years (Kannel and Benjamin, 2009; Rodriguez et al., 2015). AF can lead to acute or chronic severe outcomes, including embolic stroke, extracranial systemic thromboembolism, dementia, heart failure (HF), myocardial infarction, and venous thromboembolism (Staerk et al., 2017). Patients with AF may experience various symptoms such as palpitations, shortness of breath, exercise intolerance, chest pain, fatigue, dizziness, and light-headedness (Reynolds et al., 2006; Zimetbaum, 2017). However, up to 90% of AF events may be symptomless, particularly in the elderly (Page et al., 1994). Therefore, early recognition and diagnosis of AF are crucial, particularly in people with risk factors (RFs).

The Taiwan National Health Insurance program is a universal, single-payer health insurance program covering 99% of the residents of Taiwan. The Taiwan government has transferred medical claims data to the National Health Research Institutes (NHRI), which has established and managed a database named the National Health Insurance Research Database (NHIRD). The NHIRD contains medical claims data, including a registry of beneficiaries, disease record files, and other medical services. The NHIRD uses the International Classification of Diseases, Ninth Revision, Clinical Modification (ICD-9-CM) for coding diseases. The NHRI has released the database (for research use) and assigned a unique encoded number for accessing the annual medical history of each insured individual. Moreover, this study was approved by the Ethics Review Board of China Medical University (CMUH104-REC2-115).

To present the distribution of the study cohorts, we indicate the number and percentage for all the category variables (including age group, sex, and comorbidities). To assess the distribution difference between the two cohorts, we used the standard mean difference. The incidence destiny of AF for each cohort was calculated as the number of patients with AF divided by the total number of patients followed up. The cumulative incidence curve was measured using the Kaplan–Meier method, and the curve difference was tested using the log-rank test. To analyze the difference in AF risk between the GD cohort and the control cohort, we estimated the hazard ratios (HRs) and 95% confidence intervals (CIs) by using the crude and adjusted Cox proportional hazard models. Moreover, we used Cox models to determine the influence of cholecystectomy and various GD subtypes on AF risk. Furthermore, we applied a subgroup analysis for comparing patients with GD with control individuals through the stratification of variables, including age group, sex, and comorbidities. Additionally, Cox models were used to estimate AF risk associated with CHA2DS2-VASc score. SAS 9.4 software (SAS Institute, Cary, NC, USA) was used to perform the analyses, and R software (R Foundation for Statistical Computing, Vienna, Austria) was used to determine the incidence curves. The significance level was set at p < 0.05 for 2-sided testing.

This study involved two cohorts: a cohort of 230,076 patients with GD and a control cohort consisting of an equal number of healthy individuals (Table 1). In the study cohort, the majority of the participants were ≥65 years old (approximately 43%), and the proportions of men and women were approximately equal. Furthermore, the comorbidities, including hypertension, DM, CAD, CKD, hyperlipidemia, HF, GURD, IBD, hepatitis C, and NAFLD, were similar between the GD cohort and the control cohort.

Table 1. Demographic characteristics and comorbidities in GD and control groups.

Table 2. Incidence and HRs of AF in GD and control groups. 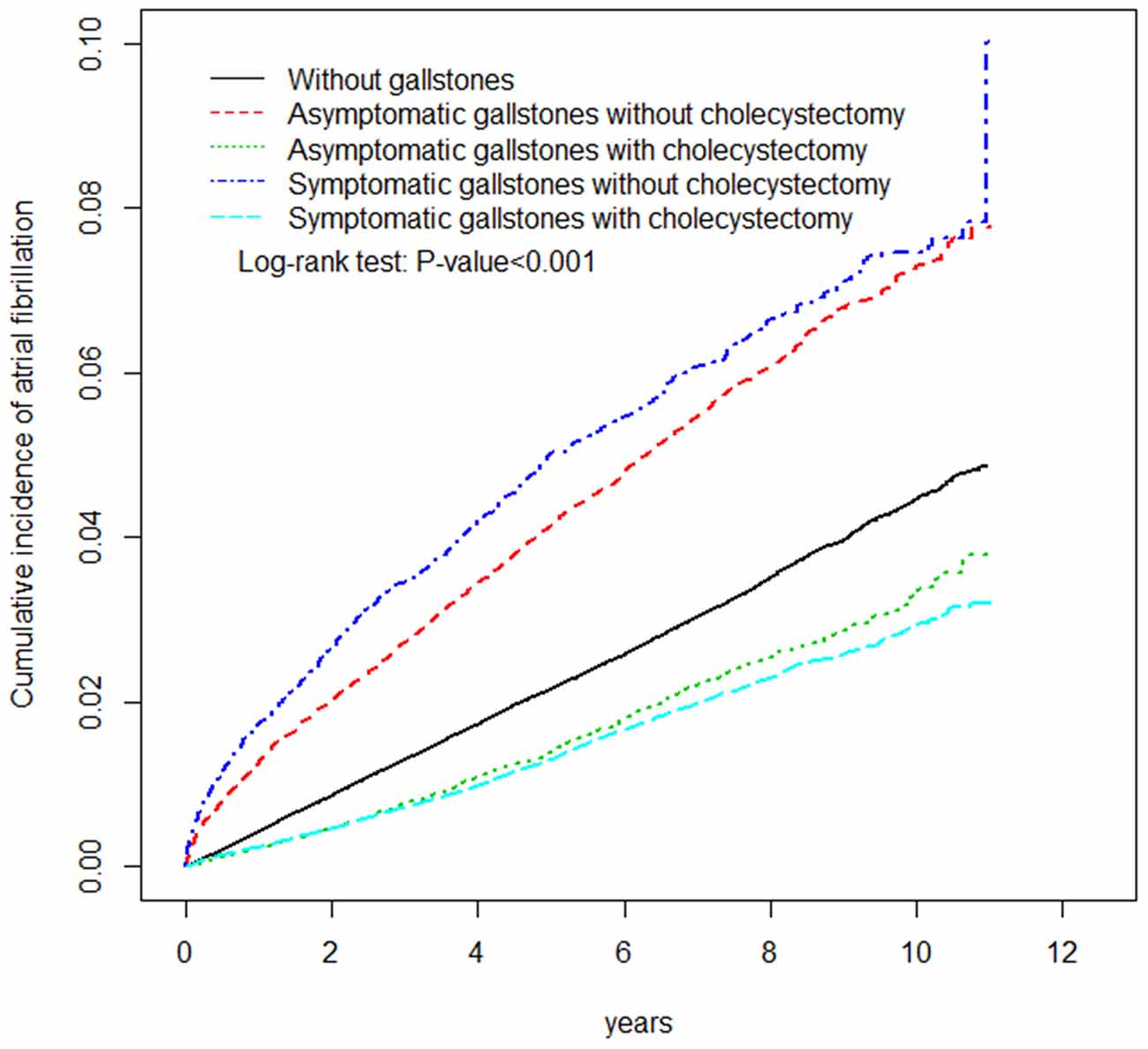 Figure 2. The adjusted cumulative incidence curves of atrial fibrillation between patients with or without gallstone disease. 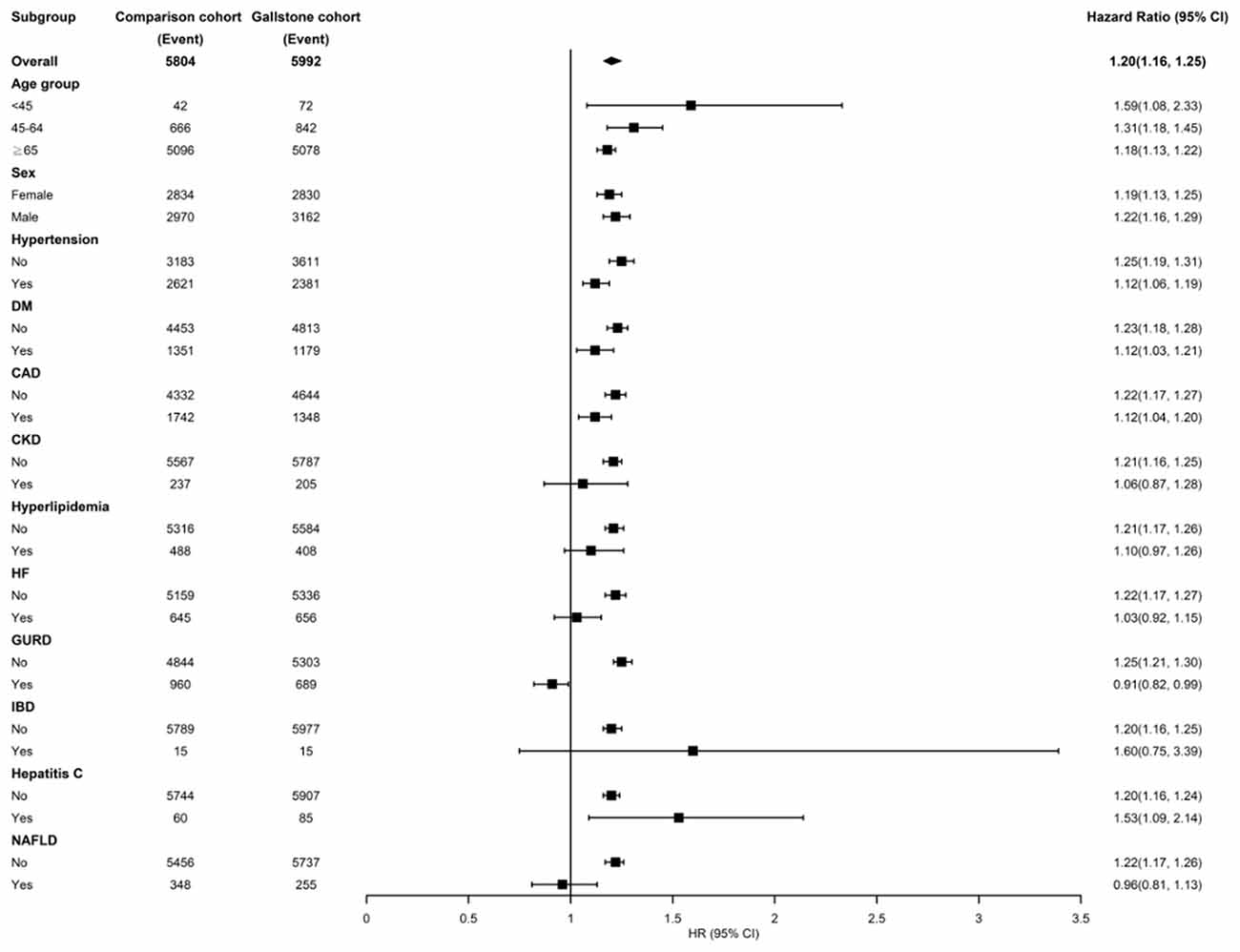 This study demonstrated that GD was independently associated with an increased AF risk in a population-based cohort, suggesting that GD may play a crucial role in determining AF risk. Furthermore, we found that patients with GD who underwent cholecystectomy were 0.85- and 0.54-fold less likely to develop AF compared with individuals without GD and patients with GD who did not undergo cholecystectomy, respectively. This result may provide further evidence that GD is one of the potential RFs for AF. GD is a common disorder that affects approximately 10%-20% of the global adult population (Lammert et al., 2016). Simultaneously, GD and AF share several RFs, including age, physical inactivity, obesity, and DM (Lammert et al., 2016; Staerk et al., 2017; Ibrahim et al., 2018). Many original and meta-analysis studies have highlighted the importance of recognizing GD as a risk factor for CVD and stroke (Bortnichak et al., 1985; Jiang et al., 2013; Olaiya et al., 2013; Wei et al., 2014, 2019; Lv et al., 2015; Wirth et al., 2015; Zheng et al., 2016, 2018; Fan et al., 2017; Upala et al., 2017; Fairfield et al., 2019). AF is known to be a major cause of systemic embolism and stroke (Staerk et al., 2017), but the association between GD and AF has remained unclear. This is the first longitudinal follow-up study to reveal that GD increases AF risk.

In the study, both asymptomatic and symptomatic GD without gallbladder removal exhibited a high AF risk. In fact, 80% of the patients with GD were asymptomatic, but these patients exhibited approximately a 1%-3% annual and 7%-26% lifetime risk of developing complications related to biliary colic or gallstones (Friedman et al., 1989; Friedman, 1993; Ibrahim et al., 2018). Conventionally, expectant management is the standard treatment for asymptomatic GD, except for patients with chronic hemolytic anemia or who are Native Americans (Ibrahim et al., 2018). Our previous findings have suggested that patients with GD have a high risk of stroke, but cholecystectomy reduces the risk of ischemic and hemorrhagic stroke among both asymptomatic and symptomatic patients (Wei et al., 2014, 2019). Therefore, patients with GD should receive frequent cardiovascular checkups. In addition, GD and AF must be studied in further detail.

In the stratified analysis based on age (45, 45–64, and ≥65 years), GD exhibited an obvious association with AF. This suggests that attention should be paid to preventing embolic stroke, particularly in young GD patients. Although epidemiological data have shown a high prevalence of GD and low prevalence of AF in women (Lammert et al., 2016; Staerk et al., 2017), both female and male patients with GD had an obvious risk of AF in the study. The GD groups had a significantly higher AF risk than the control groups without comorbidities. Thus, GD might be a newfound risk factor for AF.

AF is defined as a supraventricular tachyarrhythmia with uncoordinated atrial activation and consequently ineffective atrial contraction (January et al., 2014). Many established and potential RFs for AF induce structural and histopathologic changes in the atrium, which are characterized directly or indirectly by fibrosis, inflammation, and cellular and molecular changes (Staerk et al., 2017). Although the actual pathophysiology through which GD leads to AF remains undetermined, certain observational evidence might offer possible explanations. GD can lead to inflammation that is characterized by bile retention or microbiota in the gallbladder (Lammert et al., 2016). The inflammation can cause oxidative damage in the atrium, which may be followed by AF. Inflammatory biomarkers, such as C-reactive protein and interleukin-6, increase in AF (January et al., 2014; Gutierrez and Van Wagoner, 2015; Harada et al., 2015). Therefore, cholecystectomy is assumed to reduce AF risk through the elimination of the inflammatory mechanism. 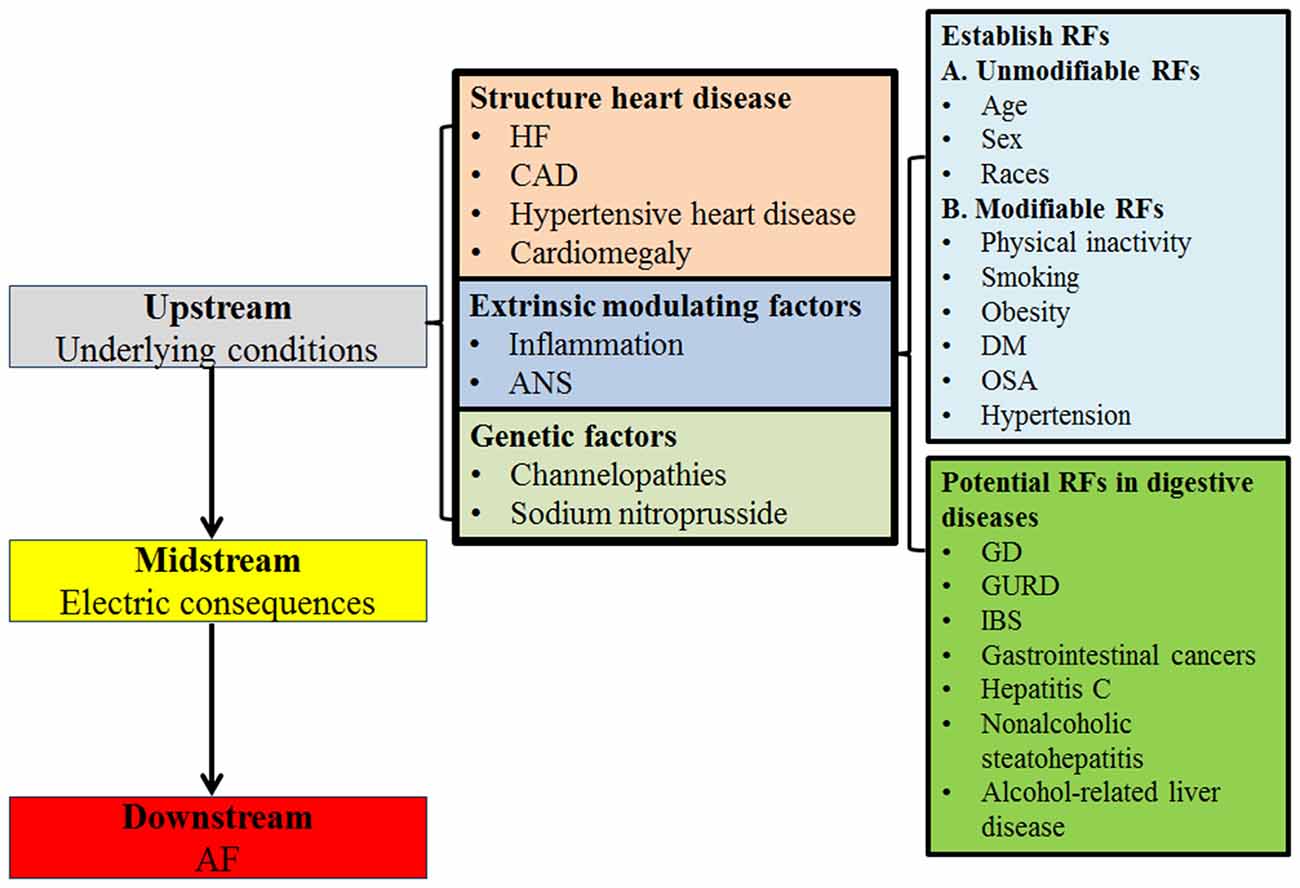 Gallstones are classified into cholesterol gallstones (90%) and pigment stones (10%). The mechanism of cholesterol gallstones is caused by disturbance of biliary cholesterol homeostasis. The pathophysiology of pigment gallstones results from hepatic hypersecretion of bilirubin, bile stasis, or bacterial infection (Lammert et al., 2016). The biochemical or inflammatory process caused by abnormal metabolism of cholesterol or bilirubin might induce left atrium remodeling and then induced AF development (Camm et al., 2012). The cholecystectomy might eliminate partially reversible factors of AF progression.

One of the advantages of this study is its use of nationwide population-based data which are highly representative of the general population. However, certain limitations of our study must be considered. First, limited to usage specifications of the NHIRD, the research period of enrollment was from 2001–2009 and the end of follow-up date was up to the end of December 31, 2011. If the research has longer collection and follow-up, the validity should be higher. Second, we did not consider whether patients had undergone open or laparoscopic cholecystectomy. The AF outcome with different procedures warrants further evaluation. Third, the detailed GD subtypes could not be used due to clinical coding habits. Fourth, AF subtypes (paroxysmal, persistent, long-standing persistent, or permanent) could not be classified because of the lack of specific ICD-9-CM codes. Fifth, evidence derived from a retrospective cohort study is generally lower in statistical quality than that derived from randomized trials due to potential bias related to adjustments for confounding variables. Sixth, the patient data recorded in the NHIRD are anonymous, and therefore, detailed personal information regarding smoking and sleep habits, body mass index, physical inactivity, lifestyle, or family history could not be obtained, although these are RFs for AF. Changes in lifestyle and body weight may affect the results. Simultaneously, relevant clinical variables, such as symptoms, signs, imaging results, pathology findings, and serum laboratory data, were unavailable in the NHIRD. However, records related to AF, GD, and cholecystectomy diagnoses were highly reliable. Further prospective observational and interventional studies are necessary to support the findings.

This large data-based longitudinal follow-up and retrospective study revealed an association between GD (both asymptomatic and symptomatic) and increased AF risk. Cholecystectomy is related to reduce AF risk. Our findings suggest that gastroenterologists and gastrointestinal surgeons must pay close attention to patients with GD in light of the risk of AF, particularly in patients with conventional stroke RFs.

The studies involving human participants were reviewed and approved by Ethics Review Board of China Medical University. The ethics committee waived the requirement of written informed consent for participation.

This study was supported in part by the Taiwan Ministry of Health and Welfare Clinical Trial Center (MOHW108-TDU-B-212-133004), China Medical University Hospital, the Academia Sinica Stroke Biosignature Project (BM10701010021), the MOST Clinical Trial Consortium for Stroke (MOST 108-2321-B-039-003), the Tseng-Lien Lin Foundation (Taichung, Taiwan), and the Katsuzo and Kiyo Aoshima Memorial Funds (Japan).

This manuscript was edited by Wallace Academic Editing.

Copyright © 2021 Ho, Chen, Lin, Tai, Wei, Yeh and Hsu. This is an open-access article distributed under the terms of the Creative Commons Attribution License (CC BY). The use, distribution or reproduction in other forums is permitted, provided the original author(s) and the copyright owner(s) are credited and that the original publication in this journal is cited, in accordance with accepted academic practice. No use, distribution or reproduction is permitted which does not comply with these terms.