Effect of aging on audiovisual integration: Comparison of high- and low-intensity conditions in a speech discrimination task

In our daily lives, events convey information through different sensory modalities. Our brain is able to integrate different sensory information into a unique and coherent percept. For instance, when communicating with others, we recognize speech content by integrating visual and auditory speech information. This process is called audiovisual integration (Laurienti et al., 2006; Stein, 2012). The benefit of simultaneous (bimodal) presentation of visual and auditory stimuli over unimodal presentation has been repeatedly validated; for instance, the response time to audiovisual stimuli is faster than that to visual or auditory stimuli alone (Teder-Sälejärvi et al., 2005; Yang et al., 2015).

Twenty younger adults (13 females, mean age = 21.3 years, SD = 1.9) and 20 older adults (13 females, mean age = 63.5 years, SD = 3.1) were recruited for the present study. All participants were right-handed and reported having normal or corrected-to-normal vision and hearing capabilities. In addition, the Mini-Mental State Examination (MMSE) was used to screen for cognitive impairments in the older participants. This study was approved by the Ethics Committee of Hubei University, and informed consent was acquired from each participant. All participants were given a reward after the procedures were completed. 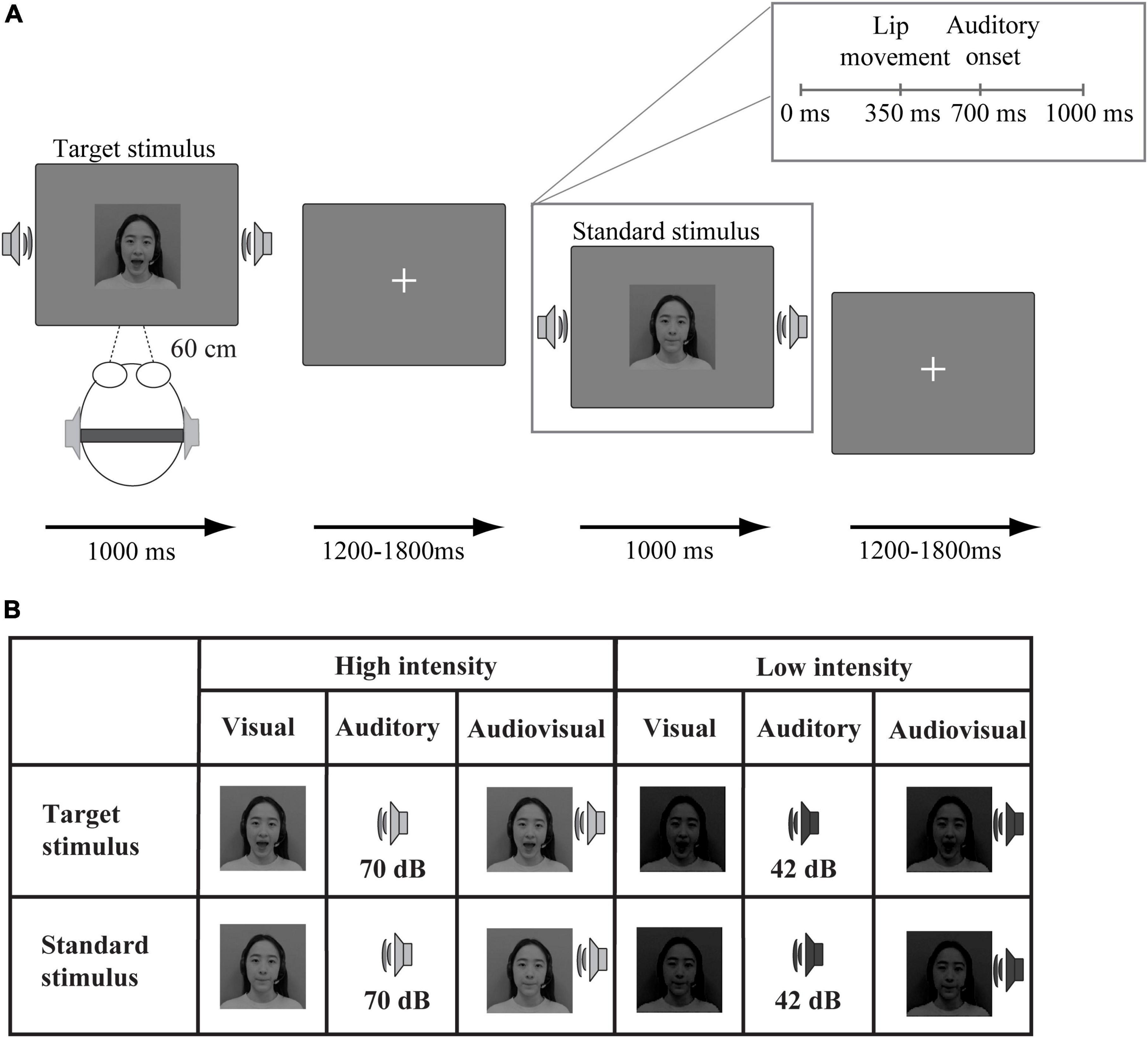 Figure 1. Schematic illustration of the experimental procedure. (A) An example of an audiovisual target stimulus and an audiovisual standard stimulus. (B) Twelve stimulus types were presented: target (“ga”) and standard (“ba”) stimuli presented in visual, auditory, and audiovisual modalities under high-intensity and low-intensity conditions.

The experiment included 3 high-intensity blocks and 3 low-intensity blocks. Each block consisted of 15 target stimuli (5 auditory, 5 visual, and 5 audiovisual) and 90 standard stimuli (30 auditory, 30 visual, and 30 audiovisual). The experiment was presented via E-prime 2.0. As shown in Figure 1, visual stimuli were displayed on a 19-inch Dell screen at a distance of 60 cm from the participant, and auditory stimuli were presented via earphones. The target or standard stimuli from three modalities (visual, auditory, and audiovisual) were randomly presented for 1,000 ms, see Figure 1A. The interstimulus interval ranged between 1,200 and 1,800 ms. The experiment was conducted in a sound-attenuated room. Participants were required to fix their eyes on the central of the monitor in which the fixation presented during presentation. The task was to press the left mouse button as quickly and accurately as possible to indicate the target stimulus “ga” (unimodal or bimodal) but not to press the button in response to the standard stimulus “ba” (unimodal or bimodal). After completing each block, participants were allowed to take a 1-min break.

To assess the audiovisual integration in ERPs, we calculated the result of ERP(AV) − [ERP(A) + ERP(V)] by subtracting the summed ERPs on the unimodal visual and auditory trials from the ERPs on the audiovisual trials at each time bin for each electrode (Giard and Peronnet, 1999). Then, one-sample t-tests were conducted to compare the amplitude of AV − (A + V) with 0 in each time bin ranging from 0 to 600 ms. If more than 7 consecutive data points were significant (α < 0.05), the participant was considered to display audiovisual integration (Senkowski et al., 2011). In the present data, audiovisual integration was defined as at least 7 or more consecutive data points that met an alpha criterion of 0.05, which suited a Bonferroni correction for multiple comparisons. This criterion meets the strict criteria for assessing reliable results when a large number of t-tests are calculated (Guthrie and Buchwald, 1991). Based on the results of the t-tests, three-time intervals of integration (200–230 ms, 320–360 ms, and 460–500 ms) and five regions of interest (frontal: Fz, F3, F4, F7, F8; fronto-central: FC1, FC2, FC5, FC6; central: C3, C4, Cz; centro-parietal: CP1, CP2, CP5, CP6; occipital: O1, O2, Oz) were chosen for further analysis. In addition, ERPs were averaged across electrodes within each region of interest. For each of these time intervals (200–230 ms, 320–360 ms, and 460–500 ms), we conducted a repeated-measures ANOVA with the mean amplitude of ERP(AV) − [ERP(A) + ERP(V)] as the dependent variable. The ANOVA included the between-subject factor of age and the within-subject factors of stimuli intensity and region of interest (ROI). Greenhouse–Geisser corrections were applied to correct the degrees of freedom if the sphericity assumption was violated. The post-hoc analysis used pairwise comparison with Bonferroni correction. All statistical analyses were conducted by SPSS version of 26.0 software package. 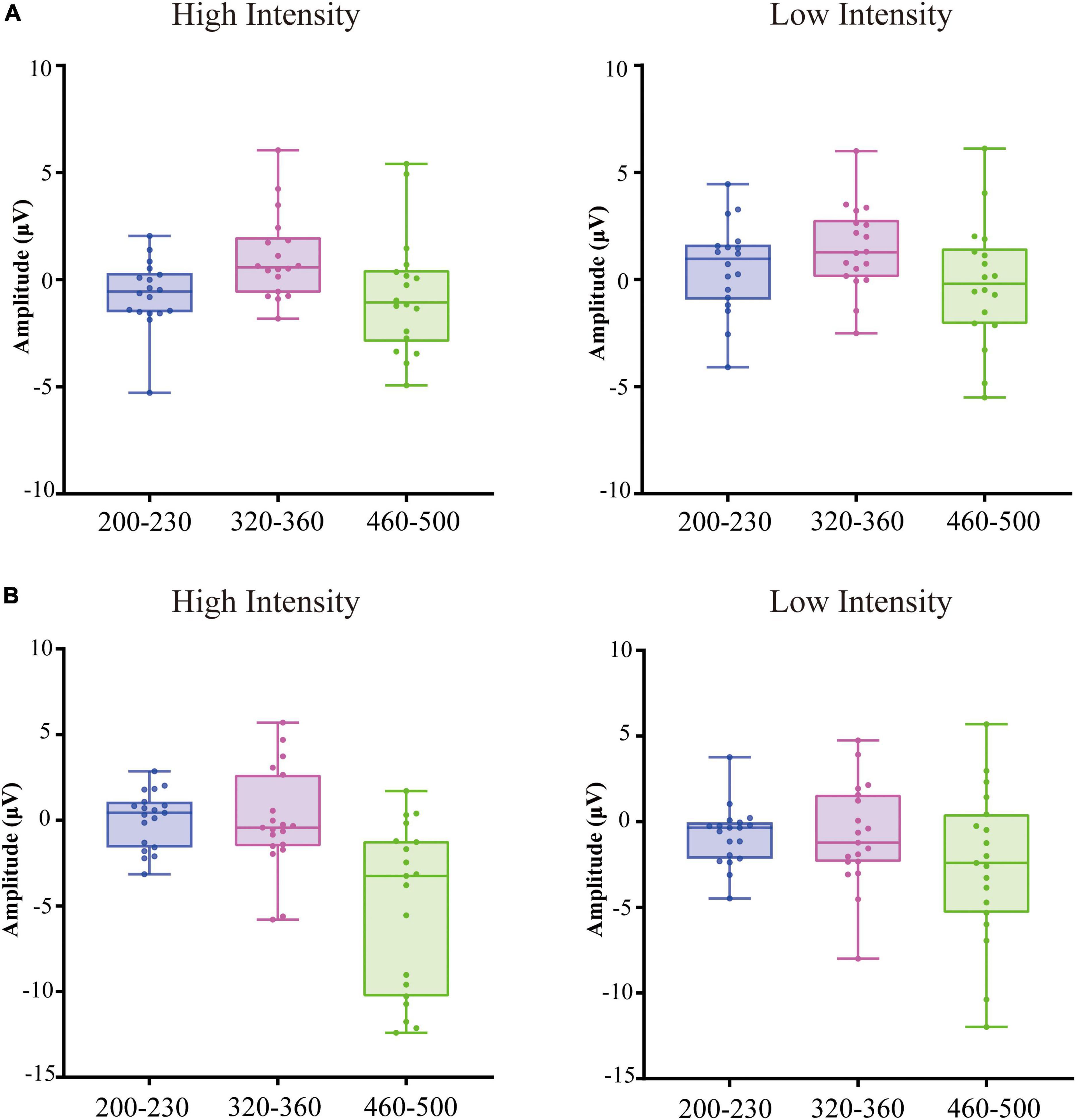 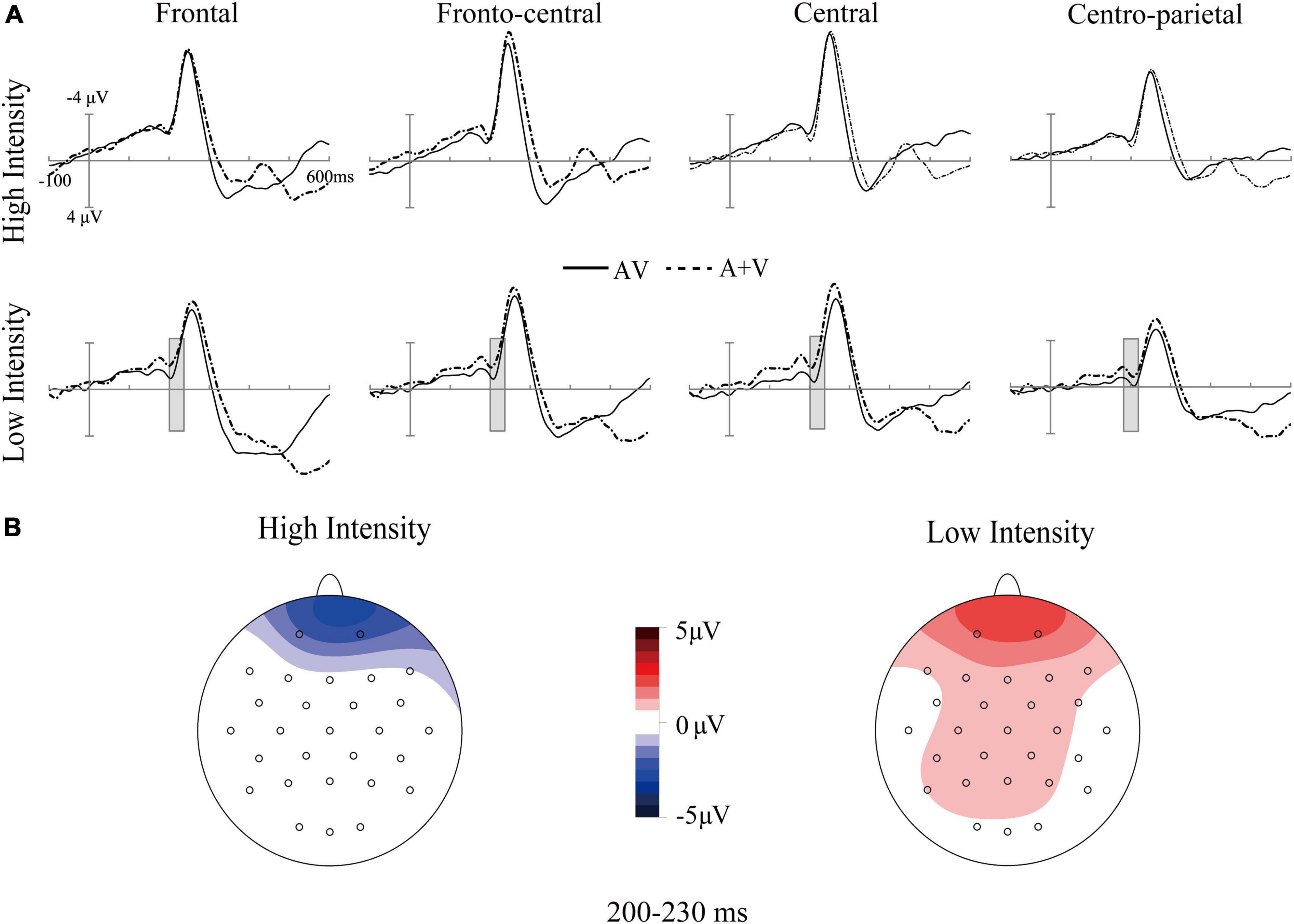 Figure 3. Grand-average event-related potentials of audiovisual stimuli (AV) and the sum of visual and auditory stimuli (A + V) from 100 ms before the stimuli to 600 ms after stimulus onset (A), as well as the topographic map of audiovisual integration [AV–(A + V)] (B) in older adults under high- and low-intensity conditions. The gray cubes represent the integration time window at 200–230 ms relative to auditory onset, mainly illustrating inverse effectiveness in older adults. 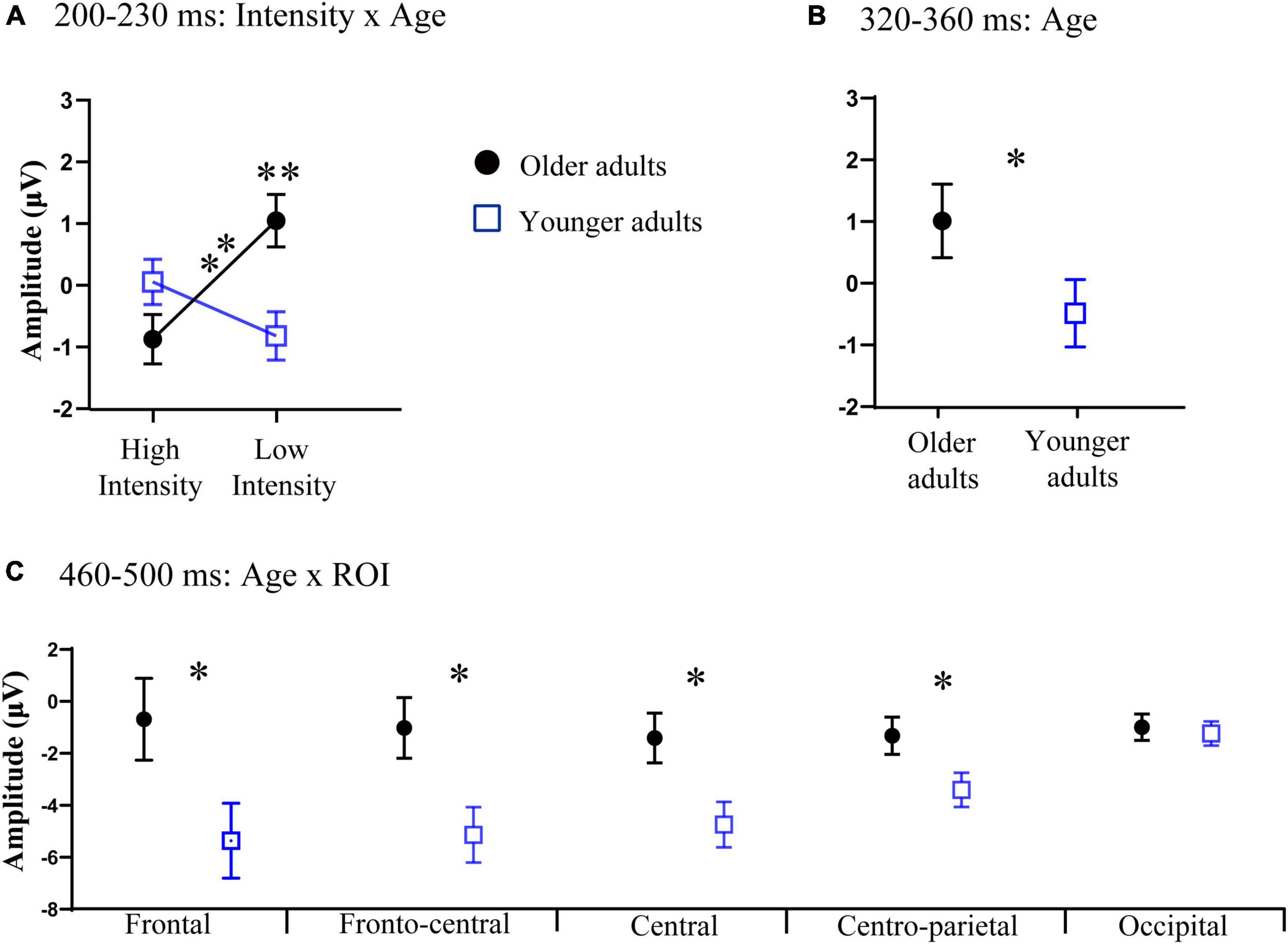 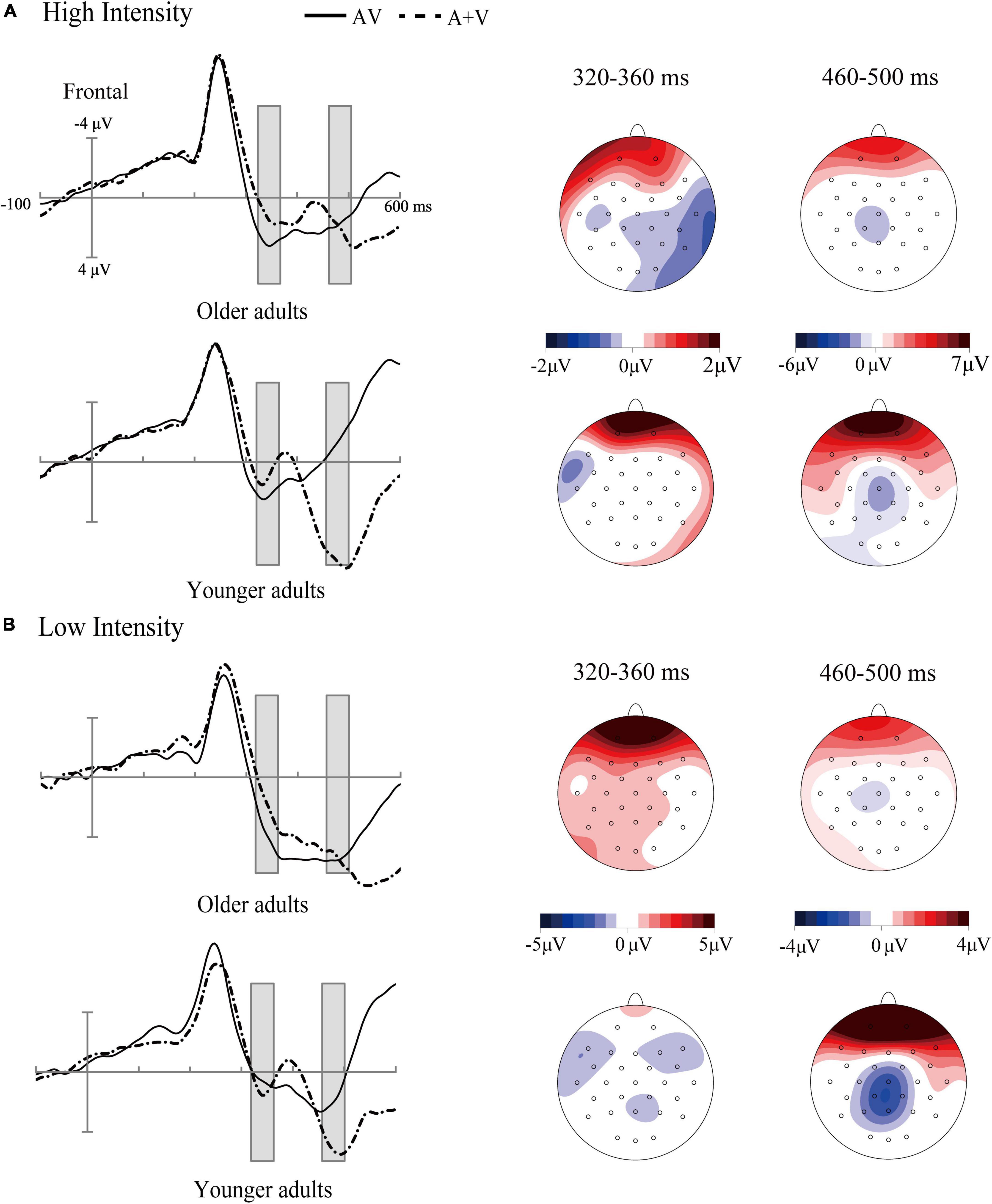 Figure 5. Grand-average event-related potentials of audiovisual stimuli (AV) and the sum of visual and auditory stimuli (A + V) from 100 ms before the stimuli to 600 ms after stimulus onset as well as the topographic map of audiovisual integration [AV–(A + V)] in different age groups under high-intensity (A) and low-intensity conditions (B). The gray cubes represent the integration time windows at 320–360 ms relative to auditory onset and 460–500 ms relative to auditory onset, illustrating the difference in audiovisual integration between older and younger adults.

Effect of aging on audiovisual integration

Interestingly, N200 component could be observed at 200–230 ms (see Figure 3), which may reflect the auditory attentional processes during audiovisual speech processing (Tremblay et al., 2021). However, our main concern is the time window of audiovisual integration similar to previous study (Ren et al., 2018). At 200–230 ms, enhanced audiovisual integration in older adults was observed when the presented stimuli were in the low-intensity condition, which reflects the involvement of higher processing resources. The theory of cognitive resource limitations describes the mutual constraint relationship between sensory and cognitive processing (Schneider and Pichorafuller, 2000). In particular, sensory and cognitive processing share common resources from unified information-processing systems, indicating that alterations in either processing would influence the other (Schneider and Pichorafuller, 2000). When stimuli intensity decreases, older adults may not effectively perceive the degraded information delivered by the stimuli. More processing resources may have been recruited to engage in this stage at the cost of the processing resources allocated to cognitive processing, resulting in greater audiovisual integration in older adults under low-intensity conditions.

Additionally, according to predictive coding theory, our perception is determined by a trade-off between prediction based on prior experience accumulated over our life span and efficiency of sensory processing (Sohoglu et al., 2012; Alm and Behne, 2013; Chan et al., 2017). However, a Bayesian model suggests that the weight between predictions and efficiency of sensory processing changes with age (Chan et al., 2017). Some investigations using sound-induced flash tasks have attempted to explore differences in the weighting of predictions and sensory efficiency in older and younger adults. Their results showed that older adults had increased beta-band activity before processing the stimulus, indicating that older adults may rely more heavily on predictions based on prior experience (Chan et al., 2017). In the current study, visual speech information could play a crucial role in this predictive process. Because in many cases, lip movements are visible which may set up predictions about what is about to be heard. The prediction based on visual information (lip movements) may depend on the prior experience. Studies have shown that audiovisual speech integration is a skill that is obtained by experiencing sound and observing lip movements (Dick et al., 2010). These experiences could contribute to the development of audiovisual speech (Dick et al., 2010). As the amount of information accumulated in our priors increases throughout one’s lifetime, older adults could make use of experience to perceive the low stimuli that delivered insufficient information.

Interestingly, some studies have reported that IE in audiovisual integration occurs at an early stage, indicating that early sensory processing may be associated with IE (Giard and Peronnet, 1999; Senkowski et al., 2011). However, our results showed delayed IE compared with these studies. This dissociation could be explained by additional cognitive processing engaged in audiovisual speech. Previous studies have investigated audiovisual integration at different levels of complexity. At lower levels, researchers have adopted simple stimuli, such as white noise or flashing lights, to elicit audiovisual integration. These stimuli can be integrated due to the factor that they coincide with regard to time, suggesting that only interactions of sensory processing occurred. At higher levels, such as audiovisual speech, speech stimuli from different modalities may still have a temporal relationship, but may also have a connection beyond the temporal factor (Wyk et al., 2010). That is, the speech sounds and lip movements are not only related in time, but also related by phonological knowledge. The current study showed that delayed IE might reflect phonological knowledge processing rather than sensory processing.

The studies involving human participants were reviewed and approved by the Ethics Committee of Hubei University, Wuhan, China. The patients/participants provided their written informed consent to participate in this study.

WY and ZZ conceived and designed the experiment. XY, ZL, and SL collected the data. AG analyzed the data, wrote the manuscript, and received the comments from YR and JW. HY and JC interpreted the data. All authors contributed to the article and approved the submitted version.

Schneider, B. A., and Pichorafuller, M. K. (2000). “Implications of perceptual deterioration for cognitive aging research,” in Handbook of aging and cognition, eds F. I. M. Craik and T. A. Salthouse (Mahwah, NJ: Lawrence Erlbaum Associates Publishers), 155–219.

Copyright © 2022 Yang, Guo, Yao, Yang, Li, Li, Chen, Ren, Yang, Wu and Zhang. This is an open-access article distributed under the terms of the Creative Commons Attribution License (CC BY). The use, distribution or reproduction in other forums is permitted, provided the original author(s) and the copyright owner(s) are credited and that the original publication in this journal is cited, in accordance with accepted academic practice. No use, distribution or reproduction is permitted which does not comply with these terms.