In addition to torpedoes being prevalent in diseased and aged brains, focal swellings on Purkinje cell axons that at least superficially resemble Purkinje cell torpedoes have been observed in the developing rat, with a transient peak observed from the second to third postnatal week of development (Gravel et al., 1986). Even less is known about the properties or functions of these so-called developmental torpedoes.

The vermis of the cerebellum was then submerged in 0.05% sodium azide in 0.01 M PBS and sliced into 100 μm parasagittal slices on a Leica Vibratome 3000 plus (Concord, ON, Canada). The slices were stored at 4°C in 0.05% sodium azide in 0.01 M PBS. Animal procedures were approved by the McGill Animal Care Committee and conform to the guidelines set in place by the Canadian Council on Animal Care. 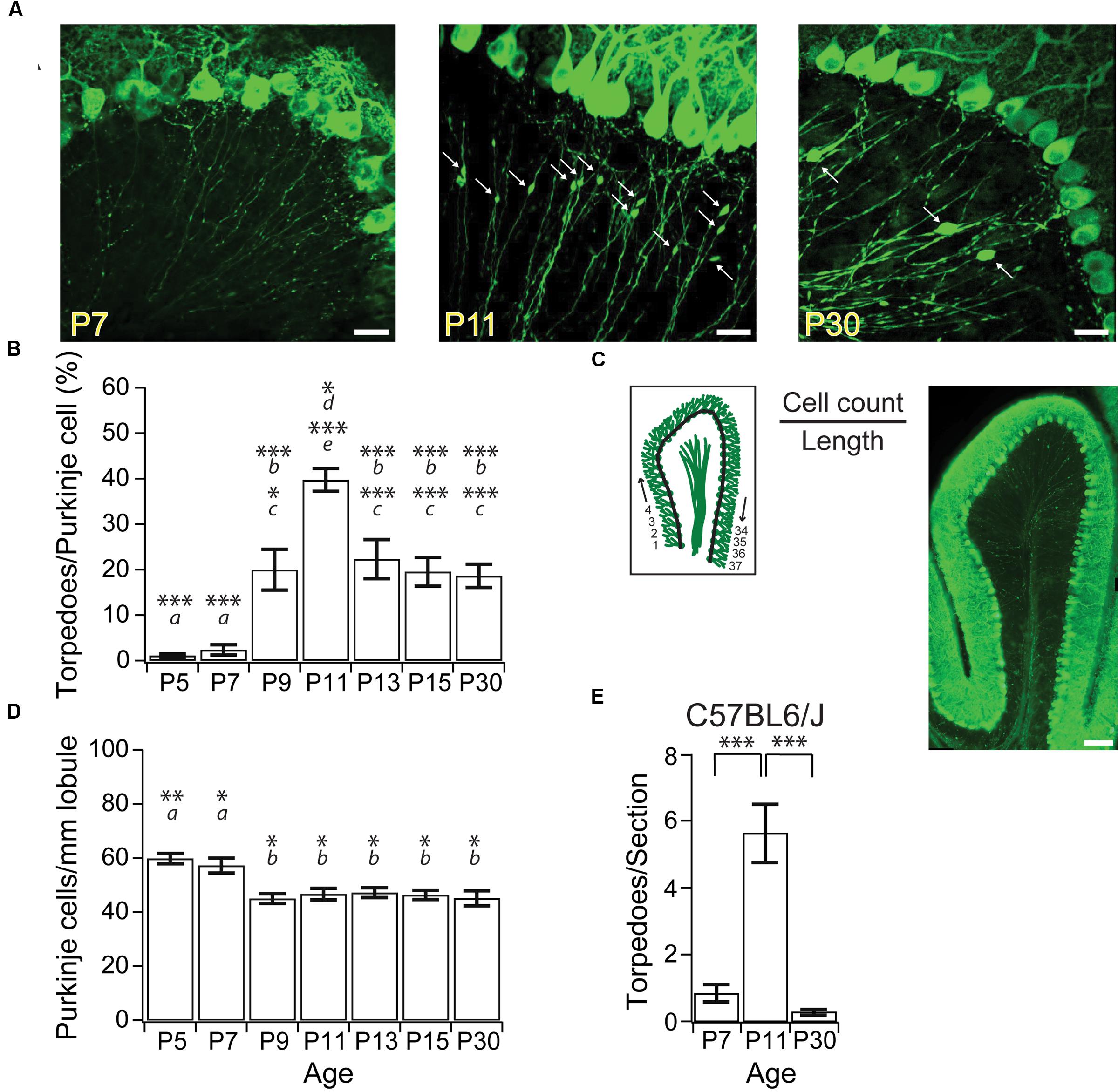 Image analysis was performed in ImageJ. Torpedo density was measured as number of torpedoes/number of Purkinje cells per acquisition when signal to noise was high. However, for very young slices and very old slices, we found that Calbindin labeling gave high background, and we thus counted the number of torpedoes/section instead. Torpedo length was measured as the distance from the beginning to the end of the swelling parallel to the axon. Torpedo width was measured perpendicular to the length, and close to the widest point of the swelling. Axial ratio was defined as the length/width of each torpedo. To compare the density of microglia around torpedoes and axons, a 25 μm × 25 μm box was centered around either Purkinje cell axonal torpedoes or Purkinje cell axons without neighboring torpedoes while viewing only the green (Purkinje cell label) channel. Switching to the red channel, the red-labeled microglia that were in the boxed region were counted. To strengthen our analytical power, we performed analysis in tandem for key findings, including developmental torpedo count. Two individuals analyzed data images independently, and results were found to be consistent across experimenter. Data was collected from equal number of acquisitions from at least three animals from a minimum of two litters (typically three) for each comparison.

Data are reported as Mean ± SEM or as percentage of totals for distributions. Comparisons were made using one-tailed ANOVA tests followed by Tukey’s HSD test for normal distributions in JMP software (SAS, Cary, NC, USA), or Student’s t-tests in Igor Pro (Wavemetrics, Portland, OR, USA). For non-normal distributions, we used Wilcoxon/Kruskal–Wallis multiple comparison tests followed by the Benjamini–Hochberg procedure using a false discovery rate (FDR) of 0.05 in JMP software (SAS, Cary, NC, USA) or a Mann–Whitney U test in Igor Pro. Multiple-comparison corrections were performed with Excel scripts. P-values of <0.05 were considered significant.

We wondered whether the transient changes in Purkinje cell torpedoes we observed were due to the presence of the tau-GFP protein in our transgenic mice, since tau is important for axonal integrity, and overexpressing tau can be pathological in Alzheimer Disease (Duan et al., 2012; Krstic and Knuesel, 2013). To determine whether our results were influenced by overexpression of tau, we examined Purkinje cell axons from C57BL6/J mice and counted the number of developmental torpedoes at three different ages: P7, P11, and P30 (Figure 1E; P7: 0.84 ± 0.26 torpedoes/section; P11: 5.6 ± 1.2 torpedoes/section; P30: 0.29 ± 0.08 torpedoes/section). Broadly speaking, we observed a similar shape in the developmental profile of torpedoes from C57BL6/J mice as in L7-tau-GFP mice, with a peak of torpedoes at P11 (significantly different from P7 and P30; P < 0.0001). These values are lower than corresponding torpedo counts from L7-tau-GFP mice (P7: 1.1 ± 0.42 torpedoes/section; P11: 18.4 ± 1.7 torpedoes/section; P30: 8.8 ± 1.2 torpedoes/section, data not shown). However, we cannot directly compare these values since image quality varies for calbindin antibody labeling and endogenous GFP expression, and it is possible that calbindin does not label all torpedoes. To address this, we processed a subset of L7-tau-GFP sections for calbindin and counted the number of torpedoes that we observed. Remarkably, we detected only 46.4% of torpedoes with calbindin compared to the same sections examined in the GFP channel (N = 15 sections). This suggests that either only a subset of torpedoes are labeled with calbindin, and/or we detect fewer torpedoes with immunocytochemistry due to poorer image quality. Thus, our data indicates that L7-tau-GFP is a good model to study developmental torpedoes because more torpedoes can be detected than with standard immunocytochemistry. Although it is possible that the presence of tau increases torpedo numbers in developing axons, this likely accounts for a relatively small proportion of torpedoes at these ages.

Developmental Torpedoes Are Unlikely to be Associated with Axonal Pruning 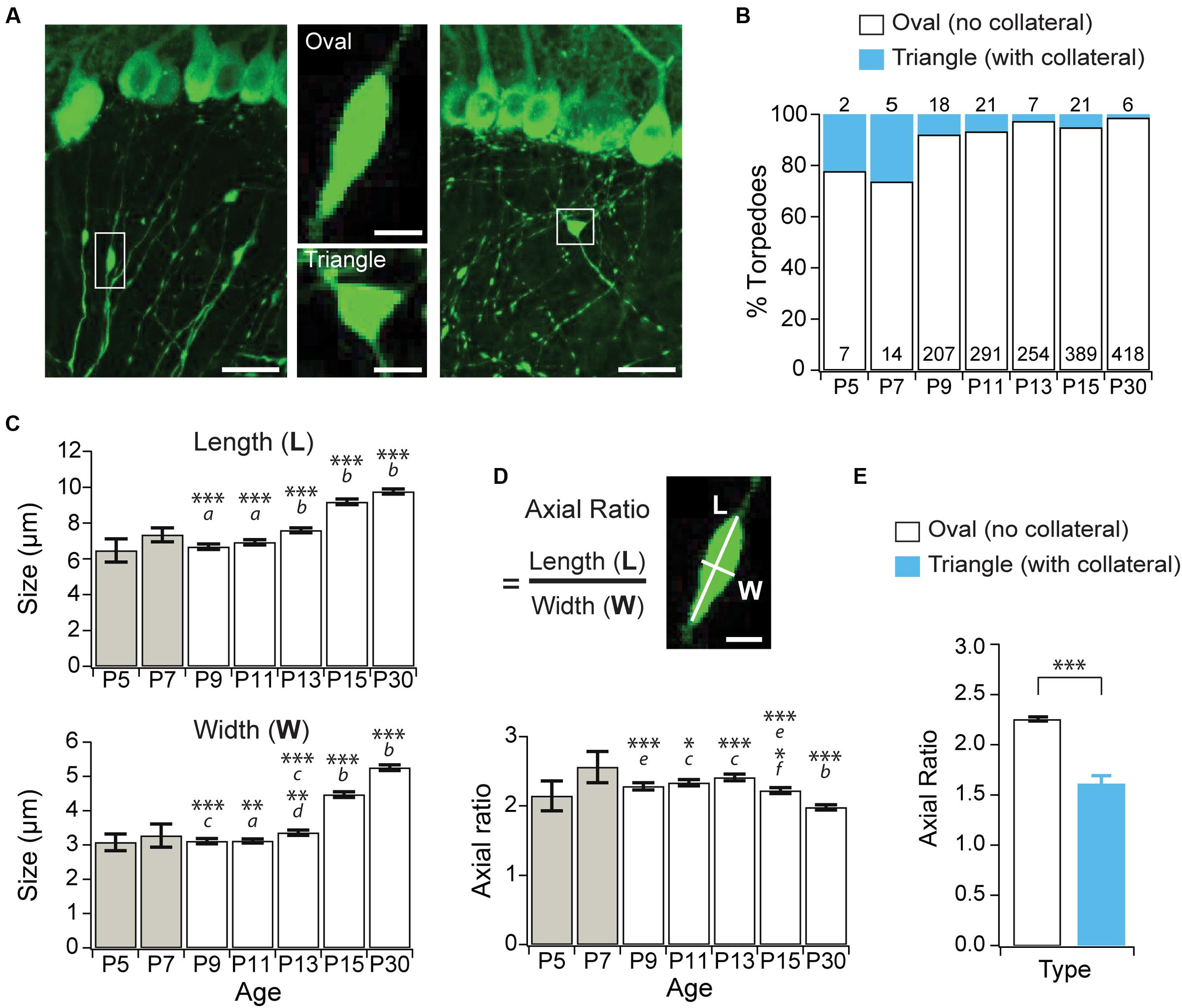 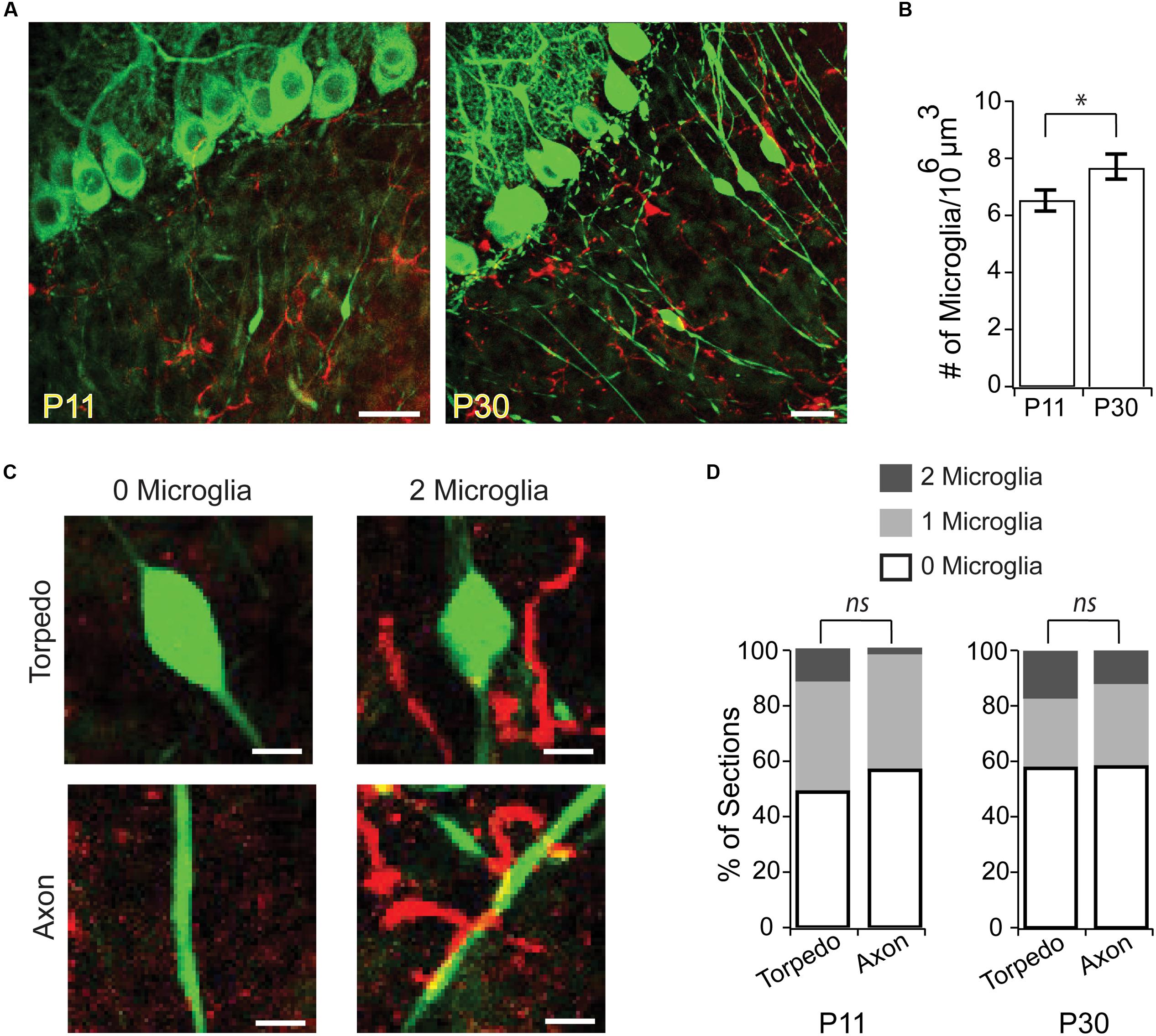 FIGURE 3. Microglia are not enriched around developmental torpedoes. (A) Sample images from P11 (left) and P30 (right) of Purkinje cells and their axons (green, eGFP), and activated microglia (red, Alexa 594). Scale bar, 20 μm. (B) The density of activated microglia increases in the developing granule cell layer between P11 and P30. (C) Sample images highlighting how analysis was done. After identifying stretches of axon with torpedoes (top) or without torpedoes (bottom) in the green channel, the red channel was added and the number of nearby microglia (within a 25 μm3 box centered on the torpedo or axon) were counted: merged examples show 0 microglia (left) and 2 microglia (right). Scale bar, 5 μm. (D) Number of microglia in the vicinity of torpedo or axon, from 0 to 2 microglia/section (white–gray). No significant differences were observed between microglia density around torpedoes or non-torpedo axons at either P11 (left; P = 0.84), or P30 (right; P = 0.84). Significance determined by Student’s t-test (B) or Mann–Whitney U test (D). ∗P < 0.05, ns P > 0.05.

Developmental Torpedoes Are Unlikely to be Presynaptic Terminals 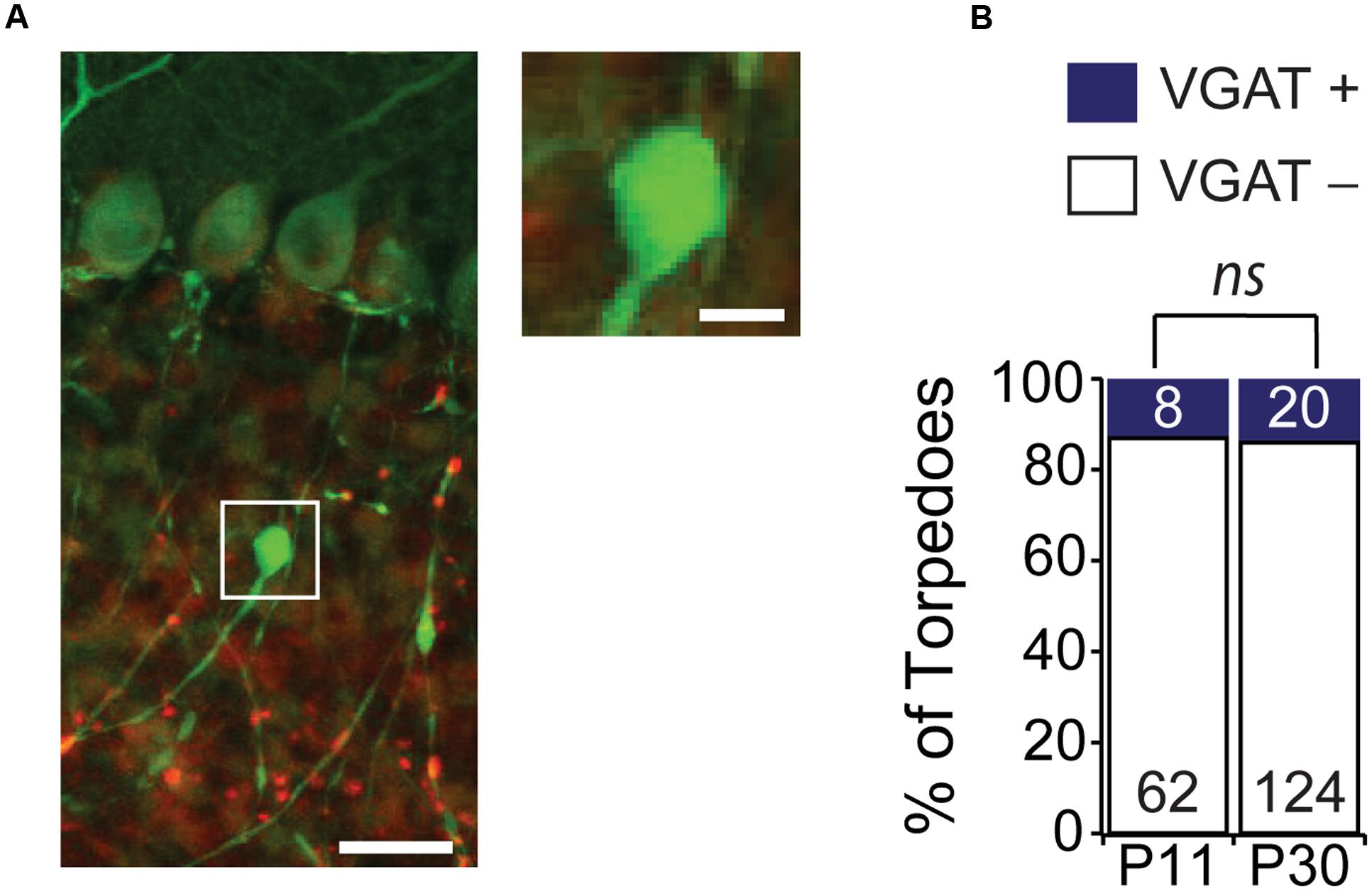 FIGURE 4. Purkinje cell torpedoes unlikely to be presynaptic terminals. (A) Sample image of Purkinje cell with torpedo (green) that is co-stained with the presynaptic inhibitory terminal marker VGAT (red). Inset shows that torpedo does not label for VGAT. Scale bar for left image, 20 μm; scale bar for insets to right, 5 μm. (B) The vast majority of torpedoes at both P11 and P30 are not positive for VGAT (white bars) with only a subset having any VGAT labeling nearby (VGAT+, blue bars), suggesting that they are unlikely to be presynaptic terminals. Number of torpedoes (N) counted is indicated in bars. Significance determined by Mann–Whitney U test, ns P > 0.05. 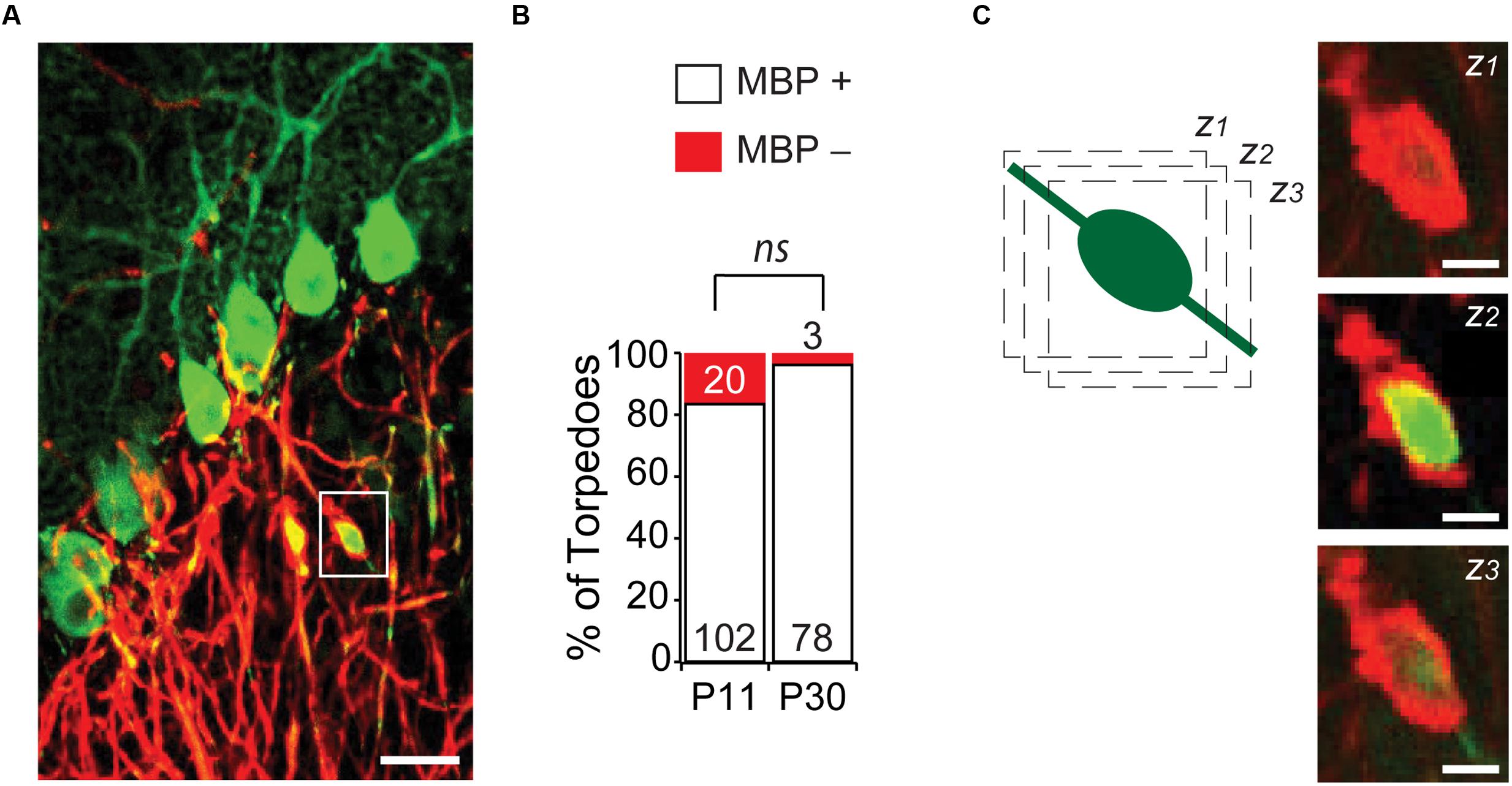 FIGURE 5. Most developmental torpedoes are myelinated. (A) Sample image showing Purkinje cells and axons (green) as well as myelin basic protein (MBP; red). Scale bar, 20 μm. (B) The vast majority of torpedoes at both P11 and P30 are positive for MBP (white bars), with only a fraction negative for MBP (red). Number of torpedoes (N) is indicated in or above each bar. (C) Successive z-stack images (z1-3) of region highlighted in panel (A), highlighting that myelin appears to fully wrap around Purkinje axon developmental torpedo. Scale bar, 5 μm. Significance determined by Mann–Whitney U test, ns P > 0.05. 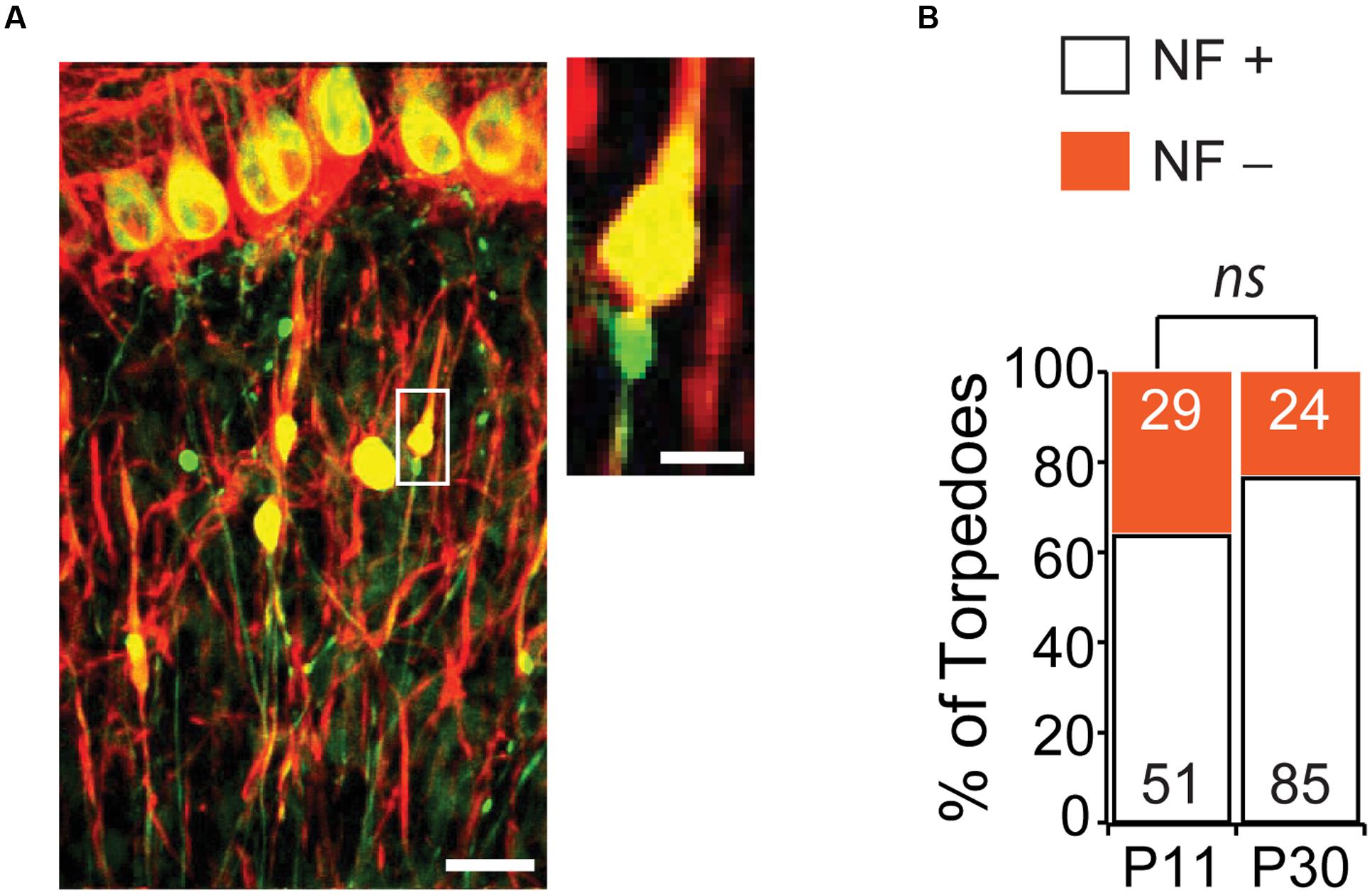 FIGURE 6. The majority of Purkinje cell torpedoes contain neurofilament (NF). (A) Sample image showing Purkinje cells and their axons (green) and neurofilament (red). Co-labeling appears yellow. Most torpedoes are neurofilament (NF) positive, although some are not. Inset shows even neighboring torpedoes on the same axon can be NF+ and NF-. Scale bar in left image, 20 μm; Scale bar in inset, 5 μm. (B) Quantification of NF+ (white bars) and NF- (orange bars) at P11 and P30. A sizeable minority of torpedoes are NF-, especially at P11, suggesting that there may be two populations of developmental torpedoes. Significance determined by Mann–Whitney U test, ns P > 0.05. 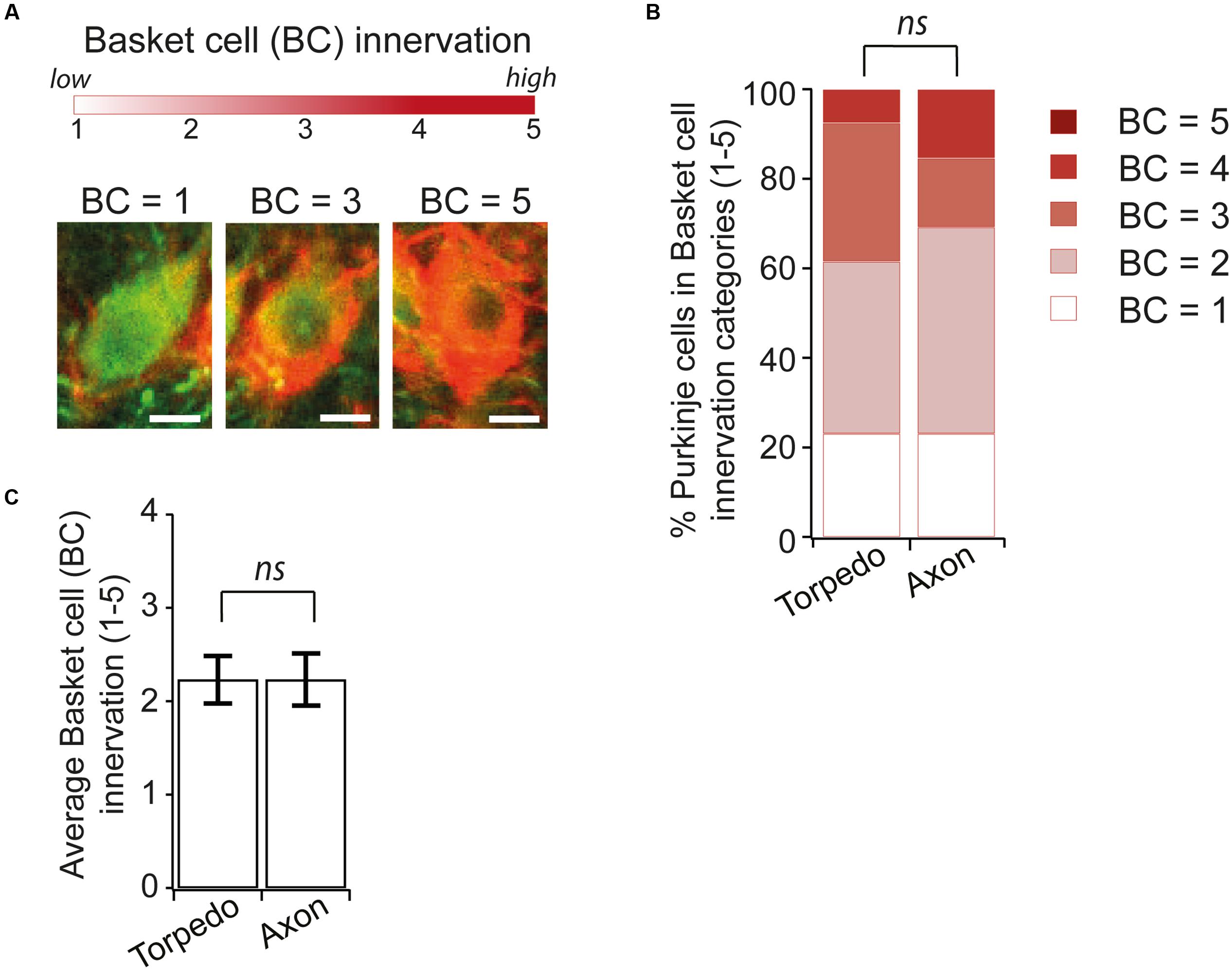 Normal Developmental Torpedoes in a Mouse Model of SCA6

FIGURE 8. Developmental torpedoes appear normal in SCA684Q/84Q mice that later develop disease-related torpedoes. (A) Sample images of Purkinje cells (purple, labeled with calbindin) from 2-year-old WT (left) and litter-matched SCA684Q/84Q mice that have more disease-related Purkinje cell axonal torpedoes. White arrows point to torpedoes. Scale bar, 20 μm. (B) Although the number of Purkinje cell axonal torpedoes are high in SCA684Q/84Q mice (purple) compared to WT mice (white bars) at an age when Purkinje cell death is observed (right) (Jayabal et al., 2015), there are no statistically significant differences in the number of torpedoes observed during development at P11 in these mice (left), and torpedo numbers are low in 7-month-old mice when disease symptoms first appear (middle) (Jayabal et al., 2015). These results suggest that developmental torpedoes are not directly related to disease-related torpedoes, as they appear at normal levels in late-onset disease models. Significance determined by Student’s t-test, ∗∗∗P < 0.001, ns P > 0.05.

Why do developmental torpedoes appear transiently a few days after birth and then decrease during a few postnatal weeks of development? The age at which torpedoes occur is a time of great restructuring in the developing cerebellum (McKay and Turner, 2005; van Welie et al., 2011; Hashimoto and Kano, 2013; White and Sillitoe, 2013). Several such transient changes have been identified in developing brain circuits that are thought to be involved in its proper development, including transient depolarization by GABAergic innervation (Ben-Ari, 2001, 2002), and transient electrical synapses (Fulton, 1995). Indeed, just in the developing cerebellum, transient presynaptic miniature currents (Trigo et al., 2010), and transient Purkinje – Purkinje synapses that mediate early network activity [(Watt et al., 2009) but see (Witter et al., 2016)] have been shown. Thus, developmental torpedoes appear to represent a normal morphological specialization during the development of Purkinje cell axons. It will be interesting to determine the temporal properties of developmental torpedoes: how long they persist on an axon, whether they are mobile or not, and what triggers their appearance and disappearance on an axon, since this may give us deeper insight into their function.

At present, we lack a good understanding of the function of torpedoes, and how they act in Purkinje cells. Interestingly, careful analysis of disease-related torpedoes in essential tremor brains reveals that these structures are simply one of a number of related morphometric changes occurring in Purkinje cells (Babij et al., 2013), suggesting that although perhaps the most notable morphological change, they may not be the most salient change for cerebellar function. What role developmental torpedoes play in circuit formation remains to be seen, but our findings argue that it is not a pathological role. One interpretation of our data suggests that there may be different populations of developmental torpedoes, which might thus serve more than one function in the developing brain. To understand the role of developmental torpedoes, we will need to have a deeper understanding of their functional properties and how they contribute to cerebellar development.

We thank S. du Lac and M. Hausser for the generous gift of the L7-tau-GFP mice, which originated in S. du Lac’s lab. We thank D. Dankort for the use of his Leica upright fluorescent microscope to generate whole lobule images, as shown in Figure 1C, and R. Krahe for the use of his Leica Vibratome 3000. We thank K. Murai and W. T. Farmer for help with immunocytochemistry. We thank A. McKinney, J. Sjöström, A. Fournier, E. Ruthazer, H. Durham, B. Brais, R. Larivière, V. Ady, B. Toscano Marquez, A. Metzger, M. Nath, S. Quilez, C. Rosen, and M. Virdee for useful discussions about this project.

Jayabal, S., Ljungberg, L., and Watt, A. J. (2016b). Transient cerebellar alterations during development prior to obvious motor phenotype in a mouse model of spinocerebellar ataxia type 6. J. physiol. doi: 10.1113/JP273184 [Epub ahead of print].

Copyright © 2016 Ljungberg, Lang-Ouellette, Yang, Jayabal, Quilez and Watt. This is an open-access article distributed under the terms of the Creative Commons Attribution License (CC BY). The use, distribution or reproduction in other forums is permitted, provided the original author(s) or licensor are credited and that the original publication in this journal is cited, in accordance with accepted academic practice. No use, distribution or reproduction is permitted which does not comply with these terms.