As a major component of the parahippocampal region, the perirhinal cortex has both indirect and direct connections with the hippocampus (van Strien et al., 2009; Kealy and Commins, 2011) and plays an integral role in several key aspects of memory, especially recognition memory (Eichenbaum et al., 2007; Squire et al., 2007; Suzuki and Naya, 2014). Excitotoxic lesions of the perirhinal cortex lead to a selective loss of novel object recognition memory (Barker et al., 2007; Barker and Warburton, 2011), which is also compromised in animals subjected to chronic adult stress (Wang et al., 2011a; Barsegyan et al., 2015; Franklin et al., 2018) or early-life stress (Reincke and Hanganu-Opatz, 2017). Intriguingly, lesions of the perirhinal cortex buffer acute stress-induced anxiety-related behavior (Schulz-Klaus, 2009), further indicating its involvement in stress-induced behavioral and cognitive deficits. However, in contrast to the extensive studies on the stress effects on the hippocampus, evidence concerning the impact of chronic stress on the perirhinal cortex and the underlying mechanisms is still sparse.

In the present study, we investigated the effects of chronic social defeat stress (CSDS) on the mRNA levels of nectin-1, nectin-3 and neurexin-1 in the mouse perirhinal cortex, and examined the involvement of the CRH-CRHR1 system in the stress effects. Moreover, we analyzed the density and morphology of dendritic spines in perirhinal layer V pyramidal neurons in control and stressed mice. We hypothesized that chronic adult stress would dysregulate the mRNA levels of CAMs in the perirhinal cortex, which might be modulated by the CRH-CRHR1 system. In addition, chronic stress might evoke dendritic spine remodeling in perirhinal layer V pyramidal neurons.

All animals were housed under a 12:12 h light/dark cycle (lights on at 07:00) and constant temperature (22 ± 1°C) with free access to food and water. The protocols were approved by the Animal Advisory Committee at Zhejiang University and the Committee for the Care and Use of Laboratory Animals of the Government of Upper Bavaria, Germany. All experiments were performed in accordance with the National Institute of Health’s Guide for the Use and Care of Laboratory Animals and European Communities Council Directive 2010/63/EU. 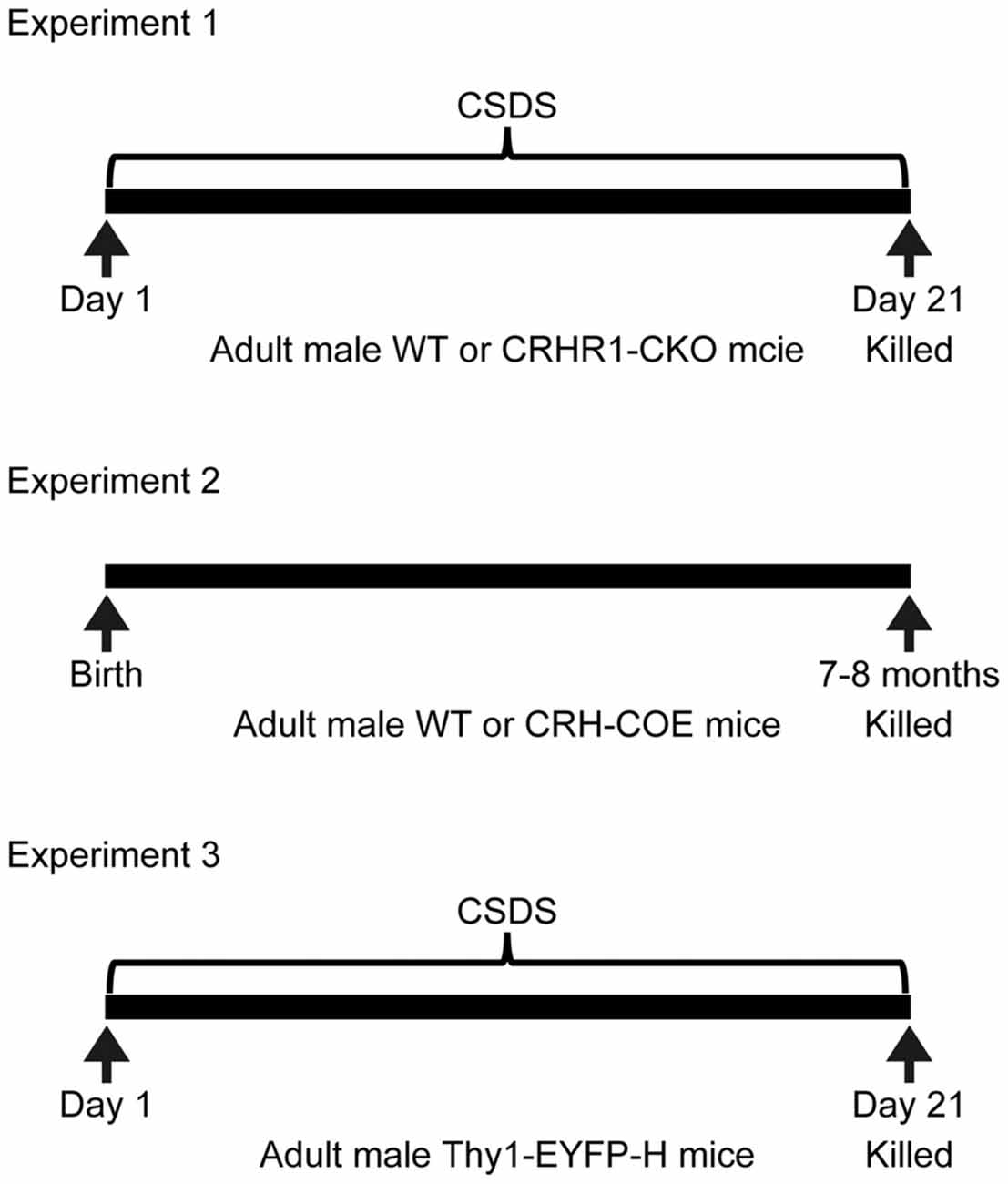 The CSDS paradigm was applied as previously described (Wang et al., 2011a; Wagner et al., 2015). Adult male CD1 mice with a body weight over 40 g were housed in the defeat cages and their dominant behavior was trained with young C57BL/6N males. The defeat procedure was carried out between 12:00 and 16:00. Over 21 days, mice were daily introduced into the home cage of a different dominant CD1 mouse. All CD1 residents rapidly recognized and attacked the intruders within 2 min. To avoid serious injuries, the subordinate mouse was exposed to the CD1 aggressor for 30 s after being defeated. After the aggressive encounter, mice were separated by a holed metal partition, allowing the animals to keep continuous sensory but not physical contact for the next 24 h. Control mice were single-housed in their home cages and allowed to explore the empty defeat cages for 30 s daily.

For Experiment 3, Thy1-EYFP-H mice were anesthetized by sodium pentobarbital and transcardially perfused by 1% buffered PFA followed by 4% PFA with 0.125% glutaraldehyde in 0.1 M PBS. Brains were post-fixed in the same fixative and cryoprotected. Horizontal sections (50 μm thick) were cut in a cryostat. After incubation with the goat anti-EYFP antibody (1:5000, ab5450, Abcam) overnight at 4°C, free-floating sections were rinsed and labeled with the Alexa Fluor 488 donkey anti-goat antibody (1:500, Invitrogen) for 3 h at room temperature. After rinsing, sections were transferred onto slides and coverslipped with Vectashield (Vector laboratories) to facilitate the delineation of the perirhinal cortex.

The regions of interest included perirhinal cortex areas 36 and 35 (Beaudin et al., 2013). To measure the immunoreactivity of nectin-1 and nectin-3, images from six sections per animal were acquired at 100× with a DP72 camera fitted to an Olympus BX61 microscope (Olympus, Tokyo, Japan) and analyzed with the NIH ImageJ software (National Institute of Health, Bethesda, MD, USA). Protein levels were determined by the differences in optical density values between the region of interest and the corpus callosum, which generally lacks staining and was considered as the background.

For perirhinal layer V pyramidal neurons, the initial dendritic segment is devoid of spines (DeFelipe and Fariñas, 1992) and the distal dendritic branches were usually truncated in 50-μm-thick sections. Therefore, the main apical dendrite (1 dendrite per neuron and 5–7 neurons per mouse) and oblique apical dendrites (1–2 dendrites per neuron and 5–7 neurons per mouse) with a distance of 100–200 μm from the center of the soma were digitized. The details about the total number and average length of selected dendrites were summarized in Supplementary Table S1. Images (1024 × 1024 pixels) were obtained using a Nikon Eclipse Ti microscope equipped with a Nikon A1R confocal system (Nikon, Tokyo, Japan). A 10× objective (NA 0.45), a 20× objective (NA 0.75) and a 60× oil-immersion objective (NA 1.40) were used. Dendrites were scanned at 0.2 μm intervals along the z-axis using the 60× objective with a 2.5× digital zoom, yielding a voxel size of 0.08 × 0.08 × 0.2 μm3. All dendrites were imaged at full dynamic range, and the pinhole size was set to 0.5 Airy Unit.

Image deconvolution was performed with the Huygens 4.3 software (Scientific Volume Imaging, Hilversum, Netherlands) as described previously (Heck et al., 2012). The settings were used so background intensity was averaged from the voxels with lowest intensity, and the signal-to-noise ratio was set to 12.5. After deconvolution, image brightness and contrast were adjusted using ImageJ. The density, volume, head diameter, and length of dendritic spines were analyzed with the NeuronStudio software1 (Dumitriu et al., 2011; Heck et al., 2012) by an investigator blind to the experimental conditions. For spine density analysis, data were processed by first averaging all dendritic segments from each mouse, followed by averaging all mice in each group. For spine morphology analysis, cumulative distributions included all automatically detected spines in a given group.

SPSS 16.0 (SPSS Inc., Chicago, IL, USA) and GraphPad Prism 5.0 (GraphPad Software Inc., San Diego, CA, USA) were used to perform statistical analysis. The normality of data distribution was assessed by the Shapiro-Wilk test and the homogeneity of variances was examined by Levene’s test. To compare the immunoreactivity of nectin-1 and nectin-3 in different layers of areas 36 and 35, one-way repeated measures analysis of variance (ANOVA) was performed, with the distance to the Bregma as the repeated within-subject factor and the brain region as the between-subject factor. To examine the effects of chronic stress on the mRNA levels of CAMs in WT and CRHR1-CKO mice, data were analyzed by two-way ANOVA (stress × genotype) followed by Bonferroni post hoc test when a significant interaction was observed. Student t-test was used to compare pairs of means. Mann-Whitney U test was used to compare the difference in the volume, head diameter and length of spines between groups. The level of statistical significance was set at p < 0.05. Data are expressed as mean ± standard error of the mean.

Expression Profiles of Nectin-1, Nectin-3 and Neurexin-1 in the Perirhinal Cortex 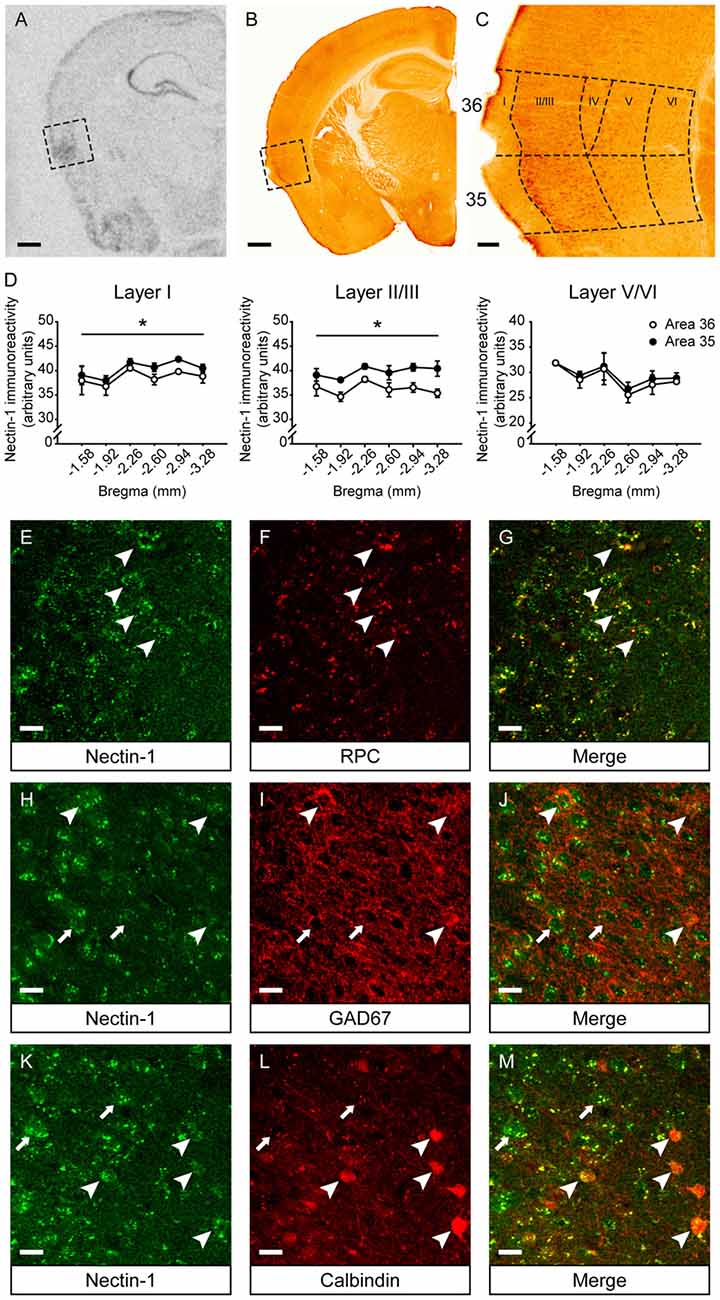 We applied the CSDS paradigm and examined the effects of chronic stress on the mRNA levels of nectin-1, nectin-3 and neurexin-1 in the perirhinal cortex of WT and CRHR1-CKO mice. Moreover, the mRNA levels of these CAMs in the DG and the RSC, which are reciprocally connected with the perirhinal cortex and important for memory (Furtak et al., 2007; Agster and Burwell, 2009), were also measured. A significant stress × genotype interaction on nectin-1 mRNA levels in the perirhinal cortex was revealed (F(1,24) = 9.396, p = 0.005, two-way ANOVA; Figures 3A,B). Perirhinal nectin-1 mRNA levels were markedly reduced by chronic stress in WT mice (control WT vs. stressed WT, p < 0.05, Bonferroni’s test), which were normalized by conditional knockout of forebrain CRHR1 (stressed CRHR1-CKO vs. stressed WT, p < 0.05, Bonferroni’s test). In addition, a significant genotype effect on nectin-1 mRNA levels was found in the RSC (F(1,24) = 7.796, p = 0.0101, two-way ANOVA), but no significant main effects or a stress × genotype interaction were observed on nectin-1 levels in the DG (Table 1). 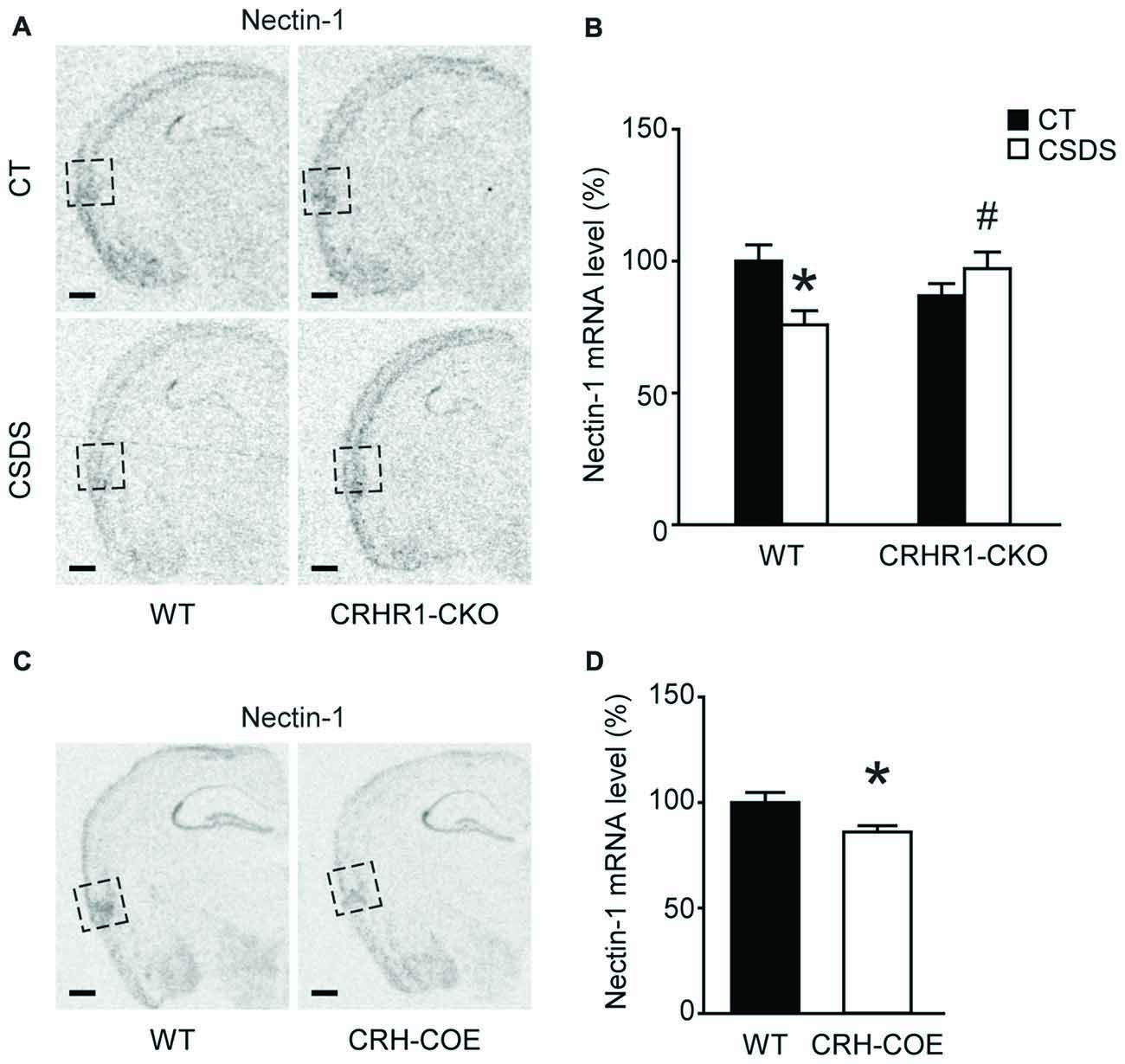 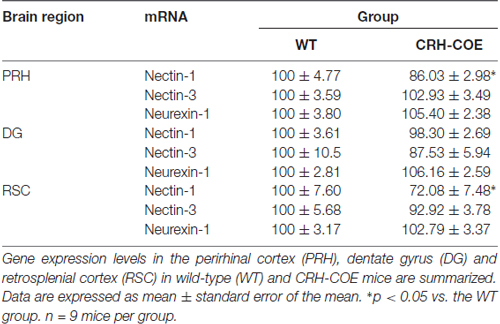 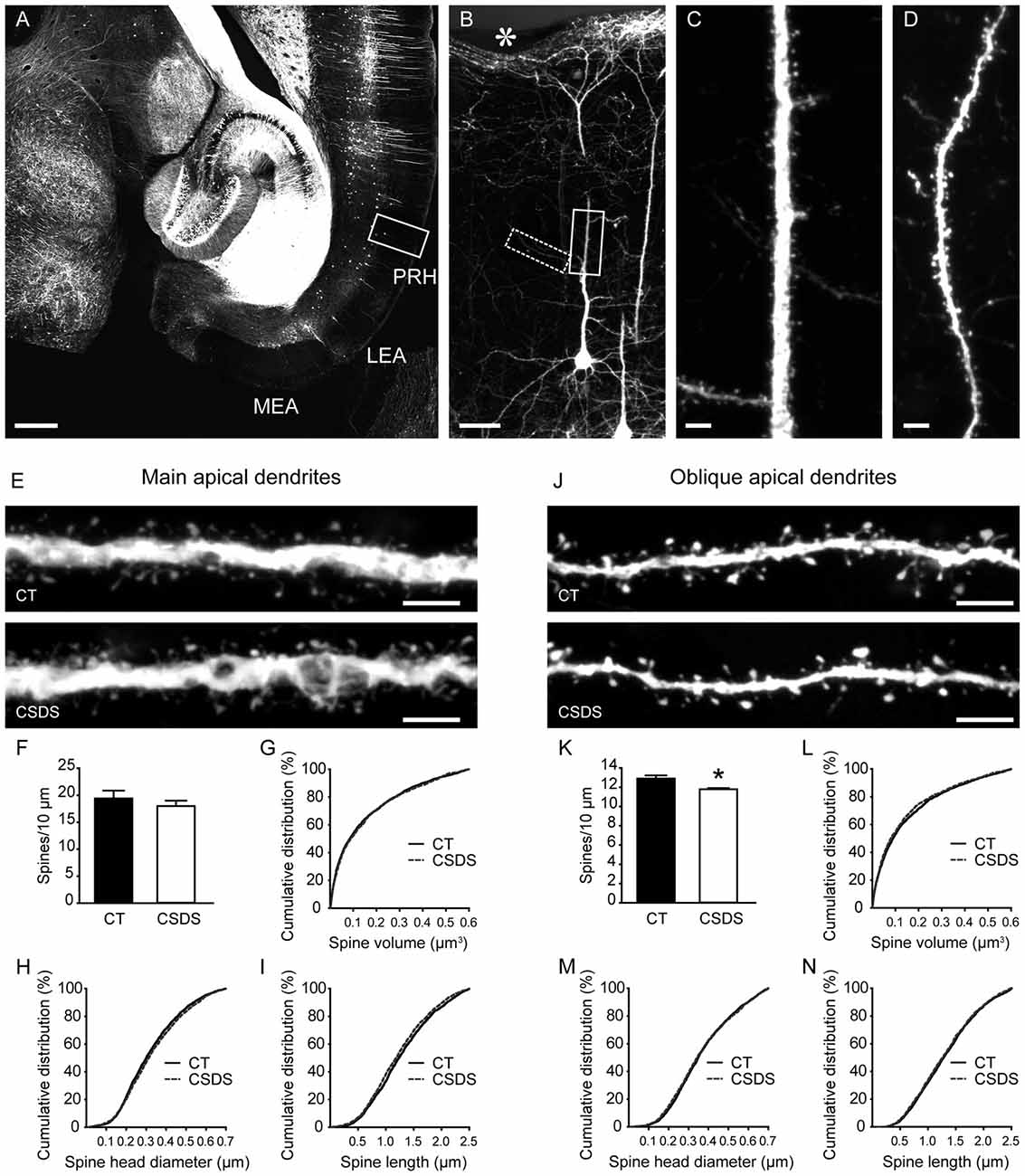 Synaptic CAMs may modulate the effects of chronic stress on synaptic plasticity and cognition (Sandi, 2004). Among these molecules, nectin-3 and neurexin-1 are implicated in chronic stress-induced synaptic and cognitive impairments (Wang et al., 2011a,b, 2013; van der Kooij et al., 2014). We observed that nectin-1, nectin-3 and neurexin-1 were expressed in the perirhinal cortex. Notably, nectin-1, which forms heterophilic adhesion with postsynaptic nectin-3, was abundantly expressed in perirhinal neurons. Most importantly, nectin-1 mRNA levels were selectively reduced in the perirhinal cortex, but not the DG or the RSC, of chronically stressed WT mice. In comparison, the mRNA levels of nectin-3 and neurexin-1 remained unchanged in all brain regions examined in stressed WT mice. Considering the involvement of nectin-1 in synaptic plasticity, it is possible that such a reduction leads to structural and functional alterations in stressed mice. Collectively, these results highlight nectin-1 as a molecular target of chronic stress, and indicate that the regulation of CAM levels by chronic stress may be brain region-specific.

The Thy1-EYFP-H mouse line shows clear labeling of neocortical layer V pyramidal neurons, whose cellular, molecular and electrophysiological properties have been characterized (Sugino et al., 2006; Miller et al., 2008; Yu et al., 2008; Porrero et al., 2010). We evaluated the effects of chronic stress on the density and morphology of dendritic spines in perirhinal layer V pyramidal neurons in these mice. In the main apical dendrites, spine dimensions were changed by chronic stress, resulting in increased spine head diameter but shortened spine length. This raises the possibility that chronic stress may increase the size of postsynaptic density surface in these neuron populations, similar to the effects of chronic stress on dendritic spines in the stratum lacunosum-moleculare of CA1 (Donohue et al., 2006). In the oblique apical dendrites, spine morphology remained unchanged after chronic stress, while a reduction in spine density was found in stressed mice. These results suggest a dendritic domain-specific modulation of spine plasticity. Although the dendritic domain-specific innervation of perirhinal layer V pyramidal neurons remains to be studied, these neurons receive inputs from various cortical regions and the hippocampus (Kealy and Commins, 2011). Viewing from a circuit perspective, dendritic spines implement a distributed circuit with widespread connectivity and endow the circuit with input-specific learning rules (Yuste, 2011). Therefore, impaired spine morphology and/or reduced spine density in perirhinal pyramidal neurons may disrupt information processing in the hippocampal-parahippocampal network and lead to cognitive deficits. The causal relationship among dysregulated nectin-1 levels, altered dendritic spine plasticity and impaired recognition memory needs to be investigated in future studies.

The current study has a few limitations. First, due to the availability of brain samples, we did not analyze the protein levels of CAMs and dendritic spine morphology in the perirhinal cortex of CRHR1-CKO and CRH-COE mice. Further studies are necessary to determine whether chronic stress reduces perirhinal CAM protein levels and impairs dendritic spine plasticity in a CRHR1-dependent manner. Second, CAM mRNA levels were examined in young adult CRHR1-CKO mice but in middle-aged CRH-COE mice. The potential interactions among age, stress and the CRH-CRHR1 system on CAM levels merit further investigations.

This work was supported by the National Natural Science Foundation of China (81471369 and 81761138044), the National Key Research and Development Program of China (2016YFA0501000) and Zhejiang Provincial Natural Science Foundation (LY17H090009). We thank the Core Facilities of Zhejiang University Institute of Neuroscience for technical assistance.

The Supplementary Material for this article can be found online at: https://www.frontiersin.org/articles/10.3389/fncel.2018.00067/full#supplementary-material

Copyright © 2018 Gong, Su, Wu, Si, Deussing, Schmidt and Wang. This is an open-access article distributed under the terms of the Creative Commons Attribution License (CC BY). The use, distribution or reproduction in other forums is permitted, provided the original author(s) and the copyright owner are credited and that the original publication in this journal is cited, in accordance with accepted academic practice. No use, distribution or reproduction is permitted which does not comply with these terms.