Male Sprague–Dawley (SD) rats (7 weeks old) were used in the present study. Animals were kept under controlled environmental conditions (23–25°C, 12 h light/dark cycle). Rats freely accessed to water and standard laboratory food during the experiment. All animal protocols were approved by the Administrative Panel on Laboratory Animal Care of Hallym University (the authorization number of the IACUC, Hallym 2018-2). All possible efforts were taken to avoid animals’ suffering and to minimize the number of animals used during the experiment. All reagents were obtained from Sigma-Aldrich (St. Louis, MO, USA), except as noted.

Under Isoflurane anesthesia (3% induction, 1.5%–2% for surgery and 1.5% maintenance in a 65:35 mixture of N2O:O2), animals were implanted a brain infusion kit 1 (Alzet, Cupertino, CA, USA) into the right lateral ventricle on the stereotaxic frame (1 mm posterior; 1.5 mm lateral; 3.5 mm depth to the Bregma). The infusion kit was sealed with dental cement and connected to an osmotic pump (1007D, Alzet, Cupertino, CA, USA). Each osmotic pump contained: (1) vehicle; (2) Mdivi-1 (50 μM) or (3) WY14643 (150 μM). An osmotic pump was placed in a subcutaneous pocket between scapulas. In our previous studies (Kim et al., 2014; Kim and Kang, 2017), the concentration of each compound could not affect the seizure activity in response to pilocarpine.

At the designated time points (control, 6 h, 12 h and 3 days after SE induction), animals were anesthetized with urethane (1.5 g/kg, i.p.), and transcardially perfused with phosphate-buffered saline (PBS) followed by 4% paraformaldehyde (in 0.1 M phosphate buffer; pH 7.4). The brains were removed and post-fixed by the same solution for 4 h at 4°C, and submerged overnight in 30% sucrose in 0.1 M PBS for cryoprotection. The 30 μm-thick coronal sections were made with a cryostat, and contained in six-well plates containing PBS. During sections, we confirmed the intracerebroventricular location of a brain infusion kit. Only animals showing the exact position were used in the present study.

Immunohistochemistry and Fluoro-Jade B Staining

After incubation with 10% normal goat serum (Vector, Burlingame, CA, USA), section were reacted in the mixture of primary antibodies listed in Table 1 (in PBS containing 0.3% triton X-100) at room temperature for overnight. After washing, sections were incubated for 1 h in a FITC (green)-, Cy3 (red)- or AMCA (blue)-conjugated secondary antibodies (Vector, Burlingame, CA, USA). For negative control, tissues were reacted with pre-immune serum instead of primary antibody. Negative control tissues did not show any immunoreactivity for primary antibody (data not shown). To analyze the neuronal damage, Fluoro-Jade B (FJB) staining was performed according to the manufacturer’s instructions. Immunoreactivities were observed using an AxioImage M2 microscope or a confocal laser scanning microscope (LSM 710, Carl Zeiss Inc., Oberkochen, Germany).

Areas of interest (1 × 105 μm2) were selected in the captured images of the dentate gyrus and the CA1 region of the hippocampus proper (15 sections per each animal), and cell numbers were counted. The number of FJB-positive neurons was also counted by the same methods. For measurement of mitochondrial length, 25 serial images (z-stack, 1 μm) were obtained from each hippocampal section and were used for 3D-reconstruction by using ZEN lite software (Blue Edition, Carl Zeiss Inc., Oberkochen, Germany). Thereafter, we measured individual mitochondrion length (long-axis) and intensities of mitochondrial HMGB1 and active caspase-3 in PV cells and CA1 neurons (n = 20/section; Ko et al., 2016; Kim and Kang, 2017).

Quantification of Data and Statistical Analysis

Student’s t-test or ANOVA were used to analyze statistical significance. Bonferroni’s test was applied for post hoc comparisons. A p-value below 0.05 was considered statistically significant. 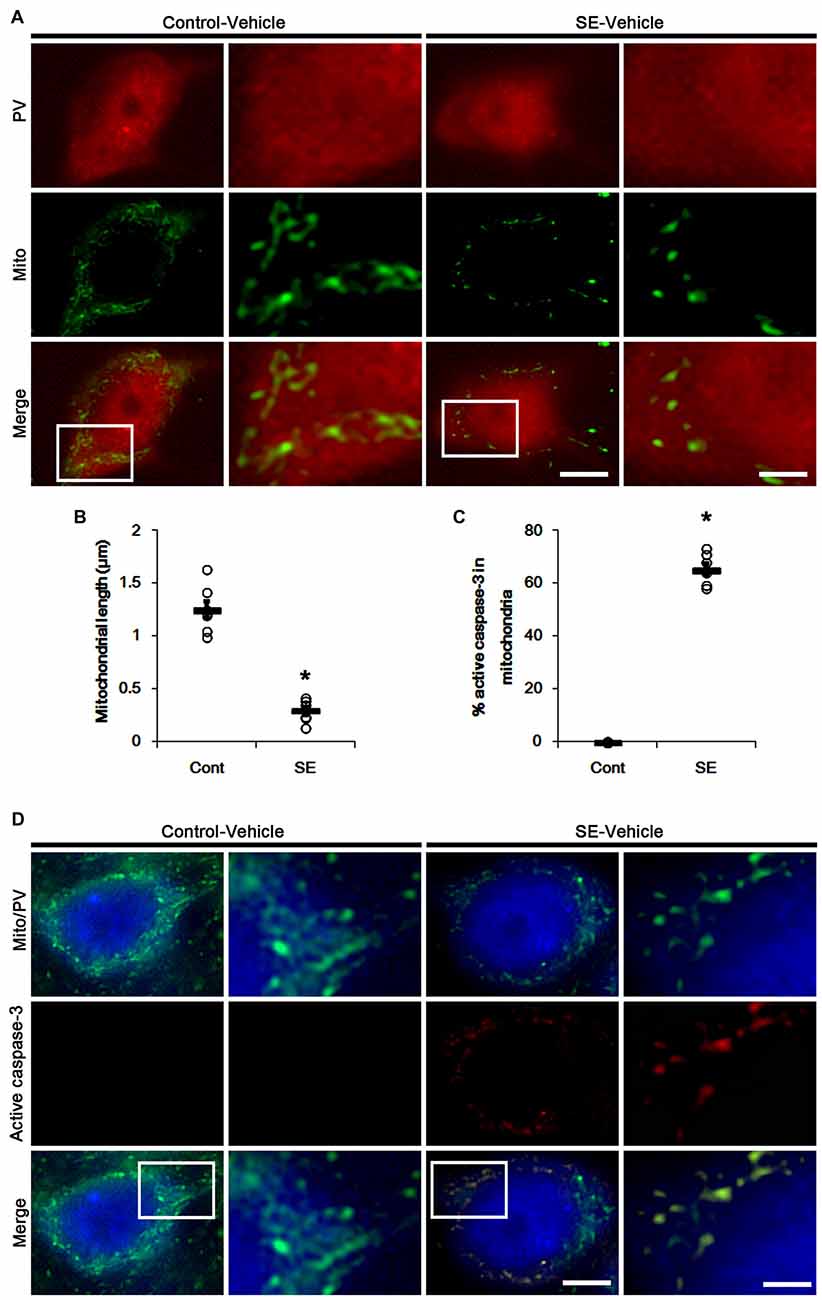 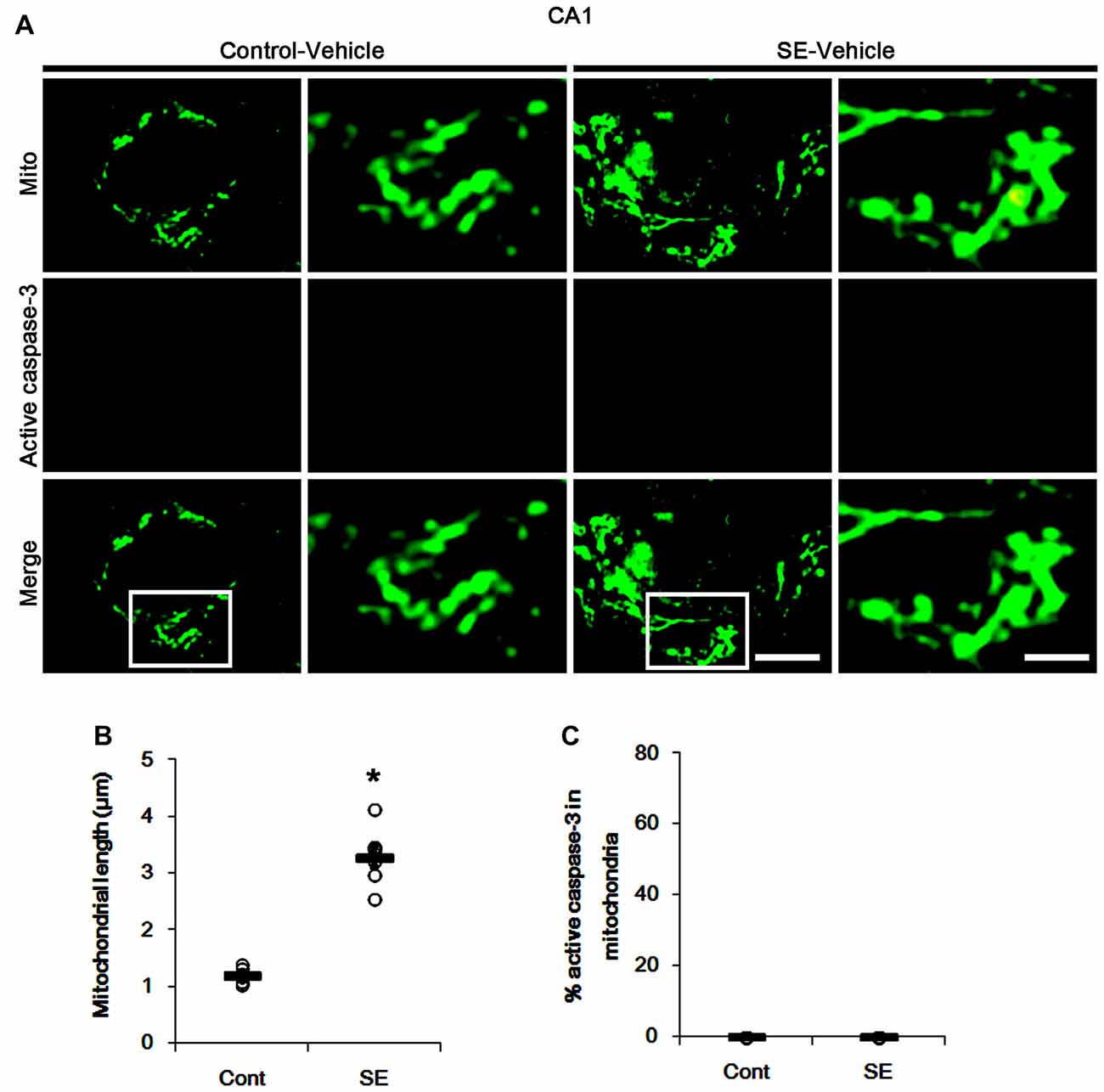 Mitochondrial Fragmentation Is Required for Active Caspase-3 Import to Mitochondria 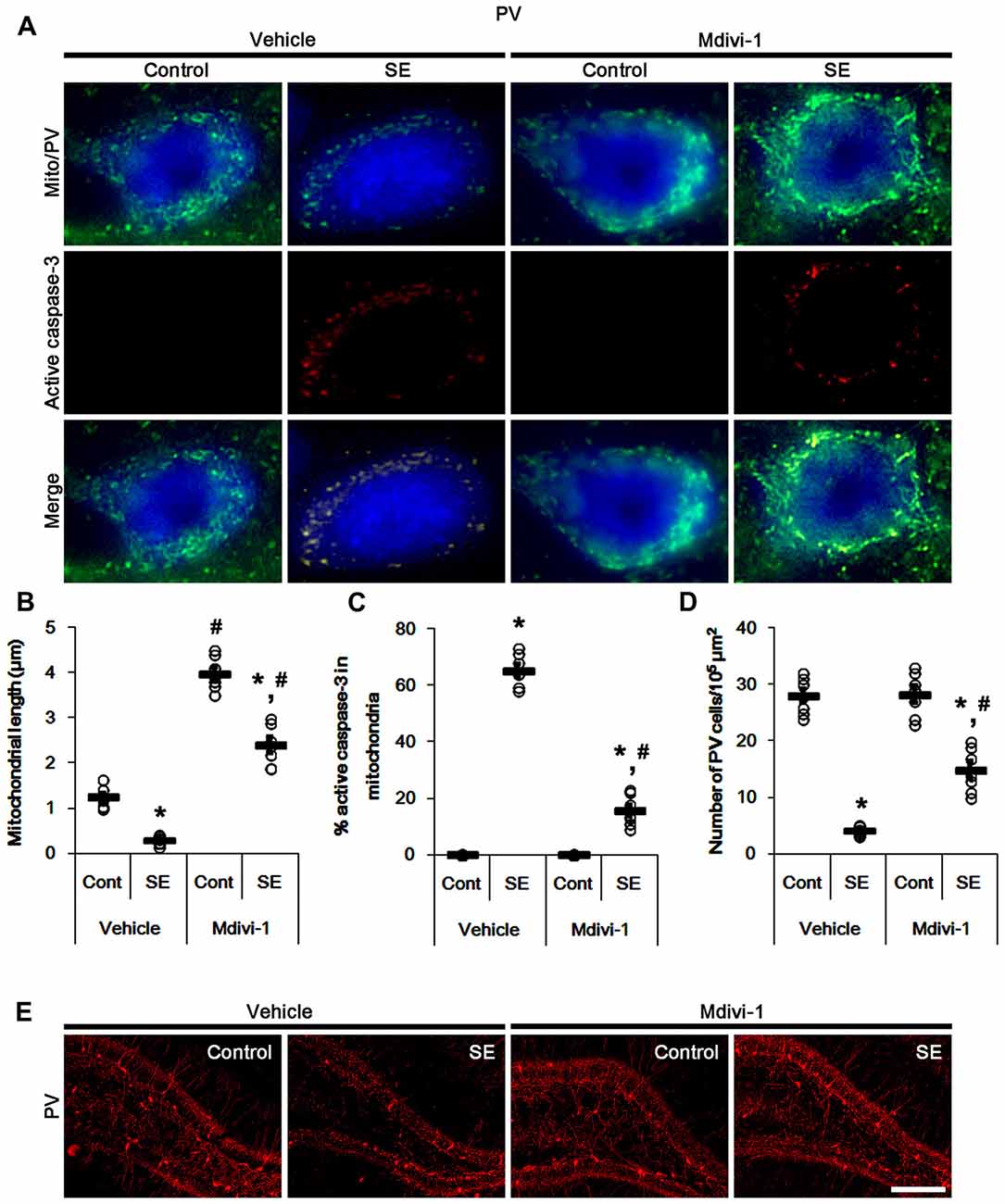 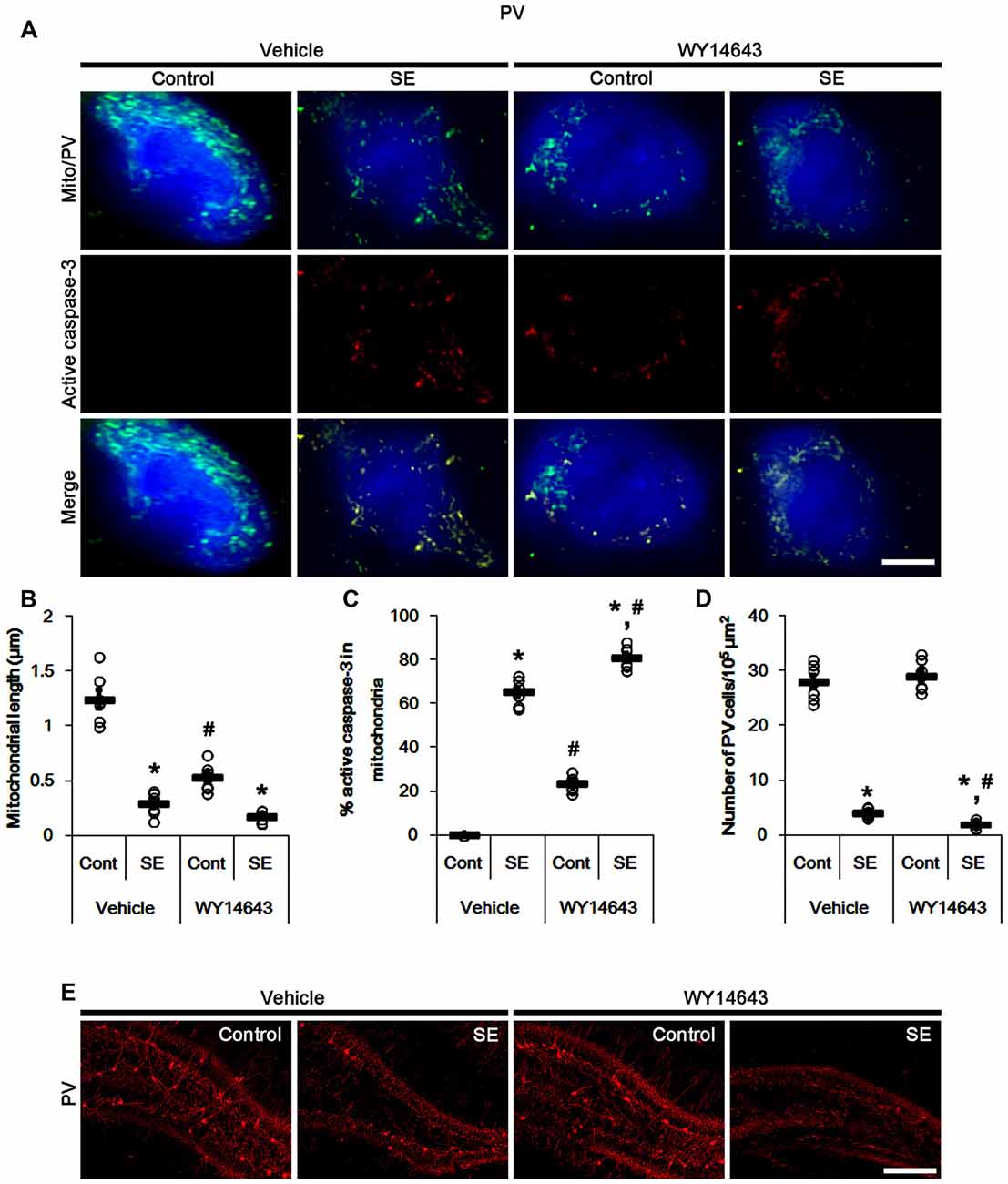 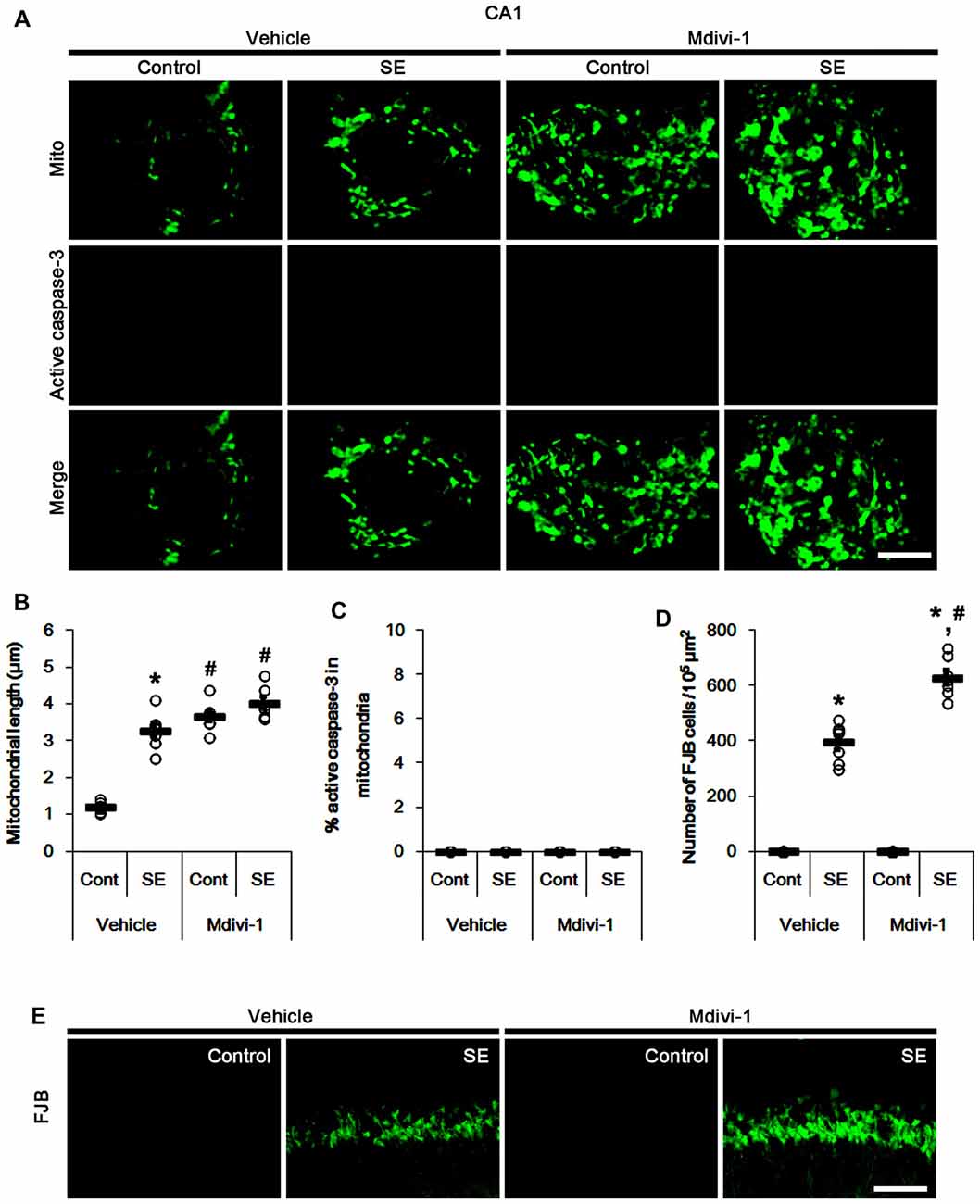 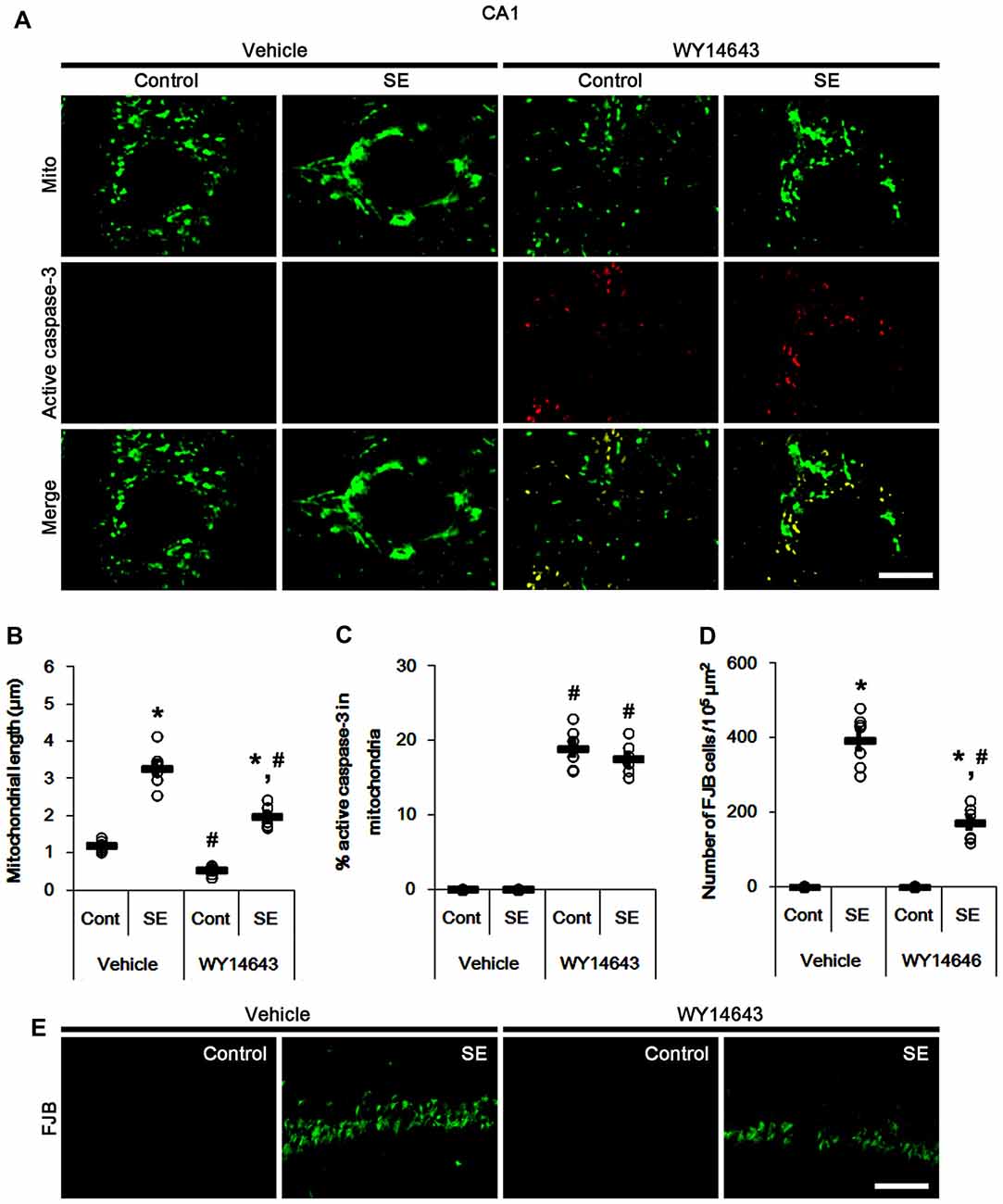 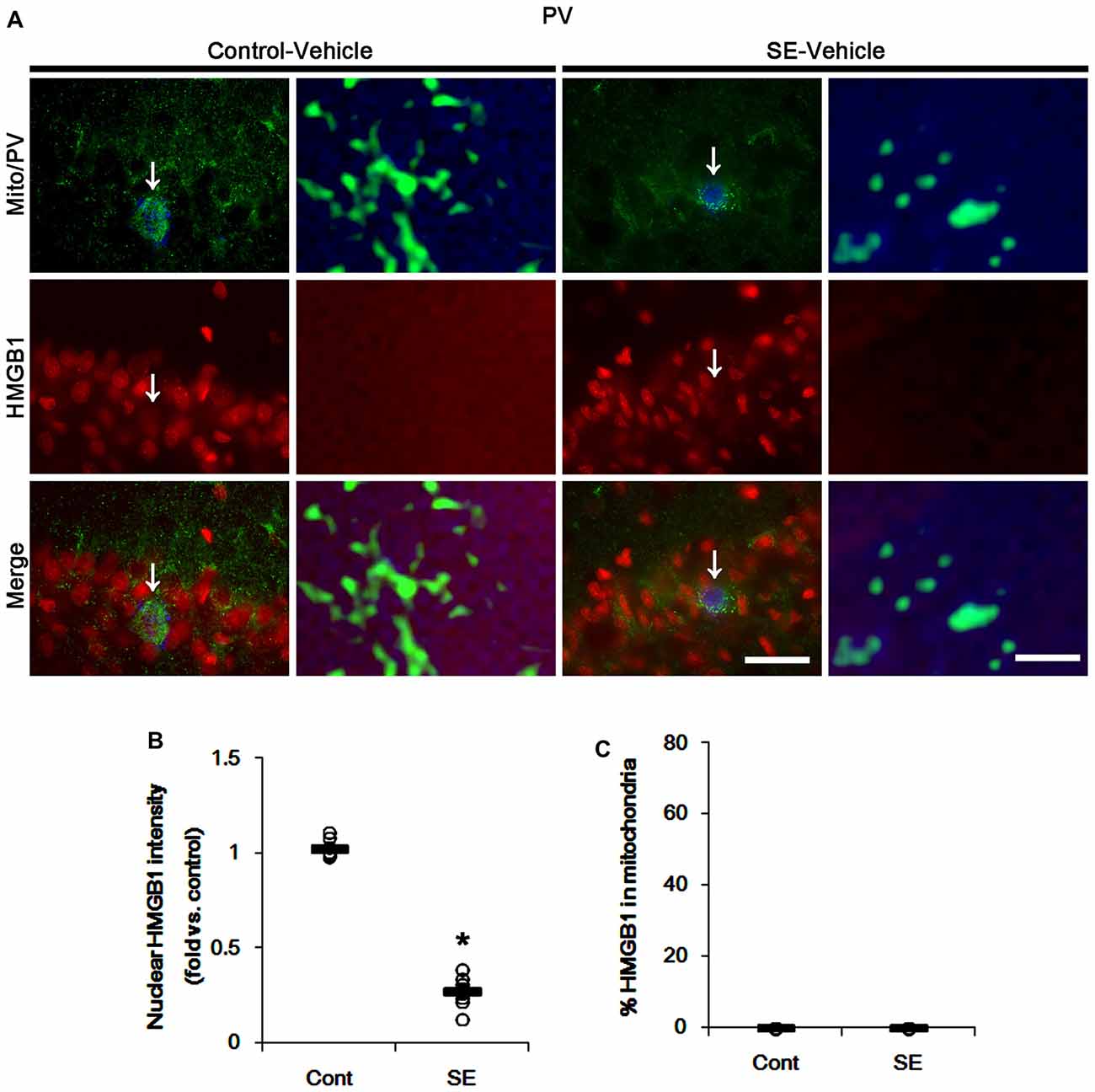 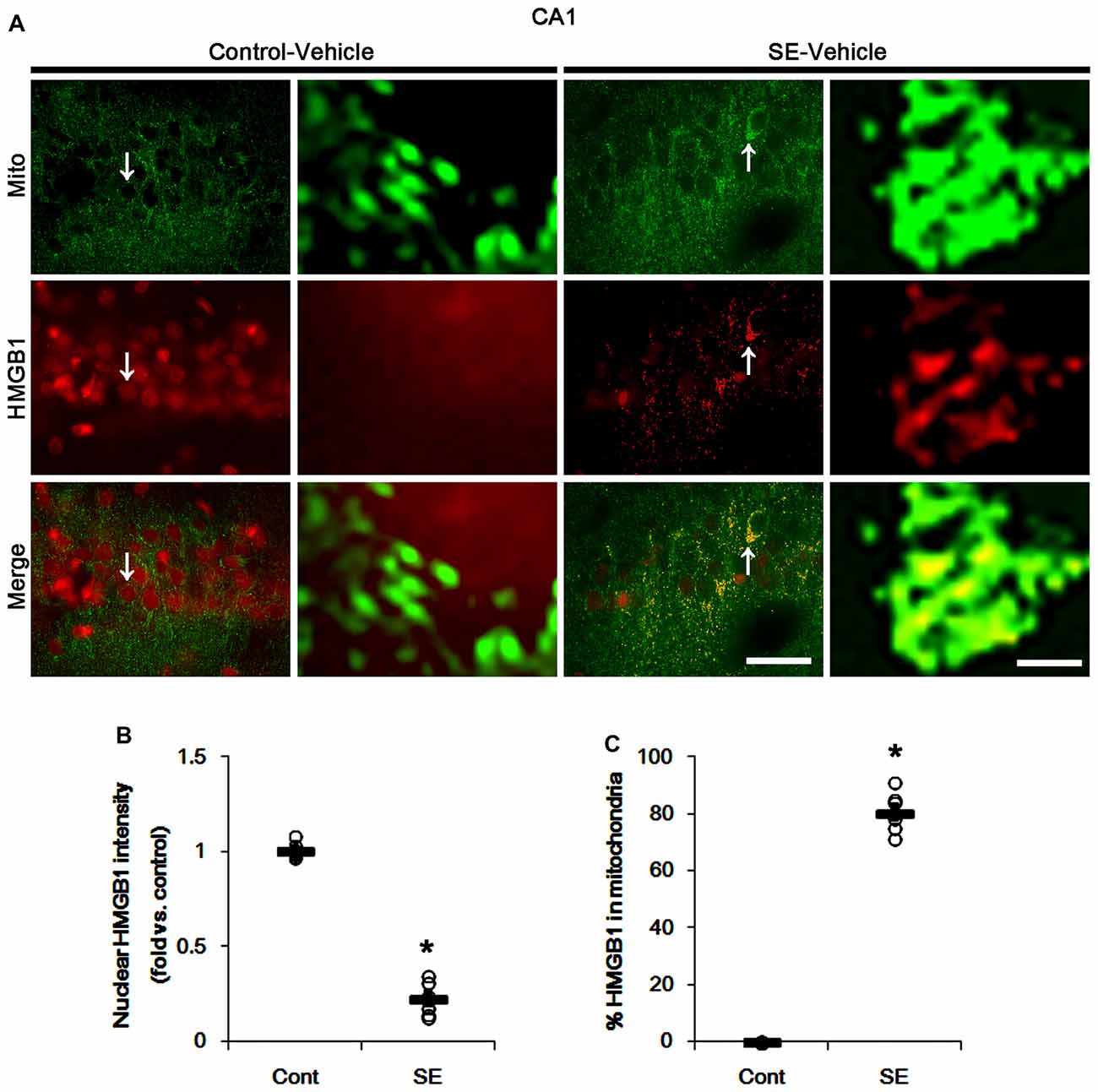 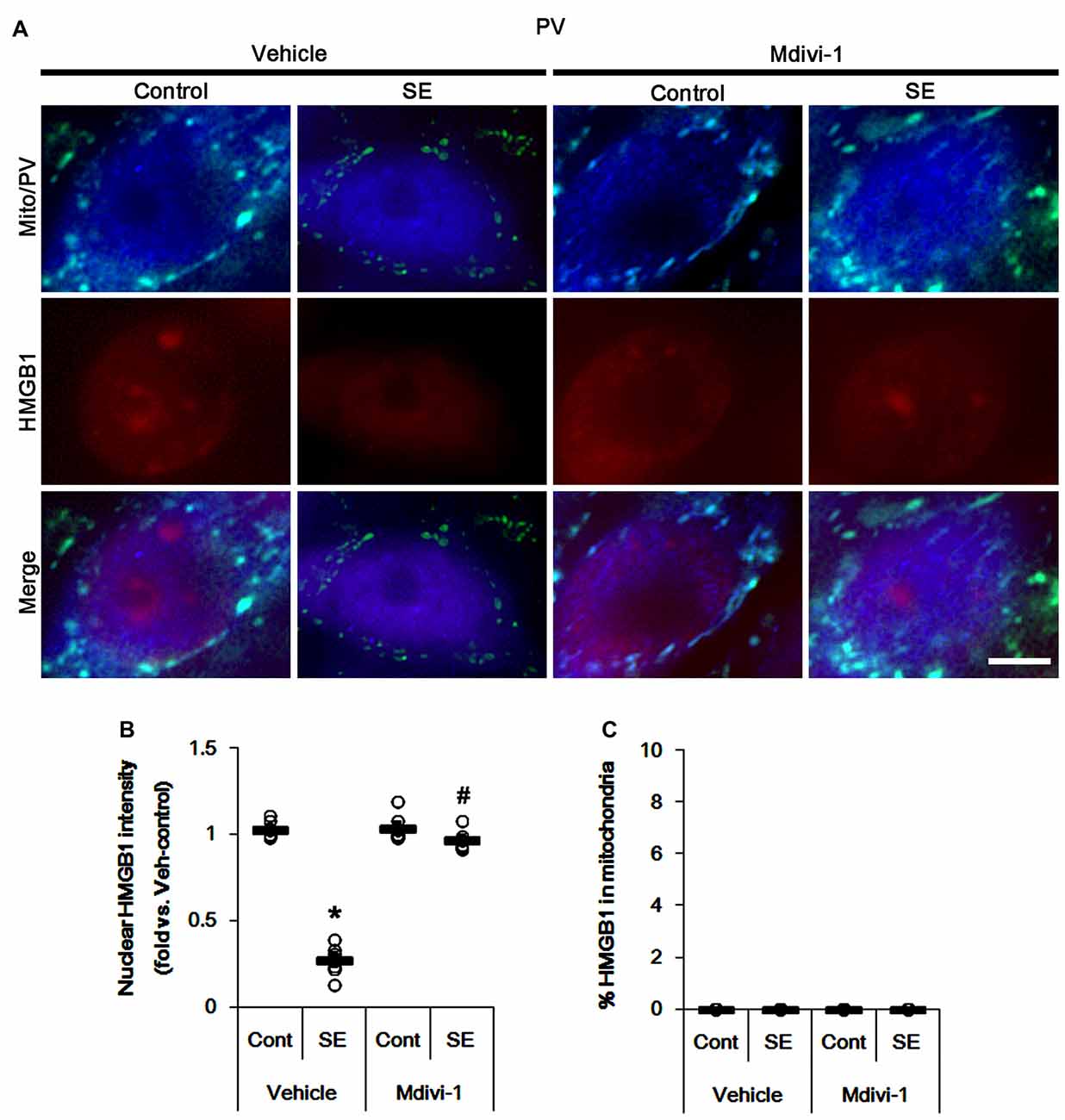 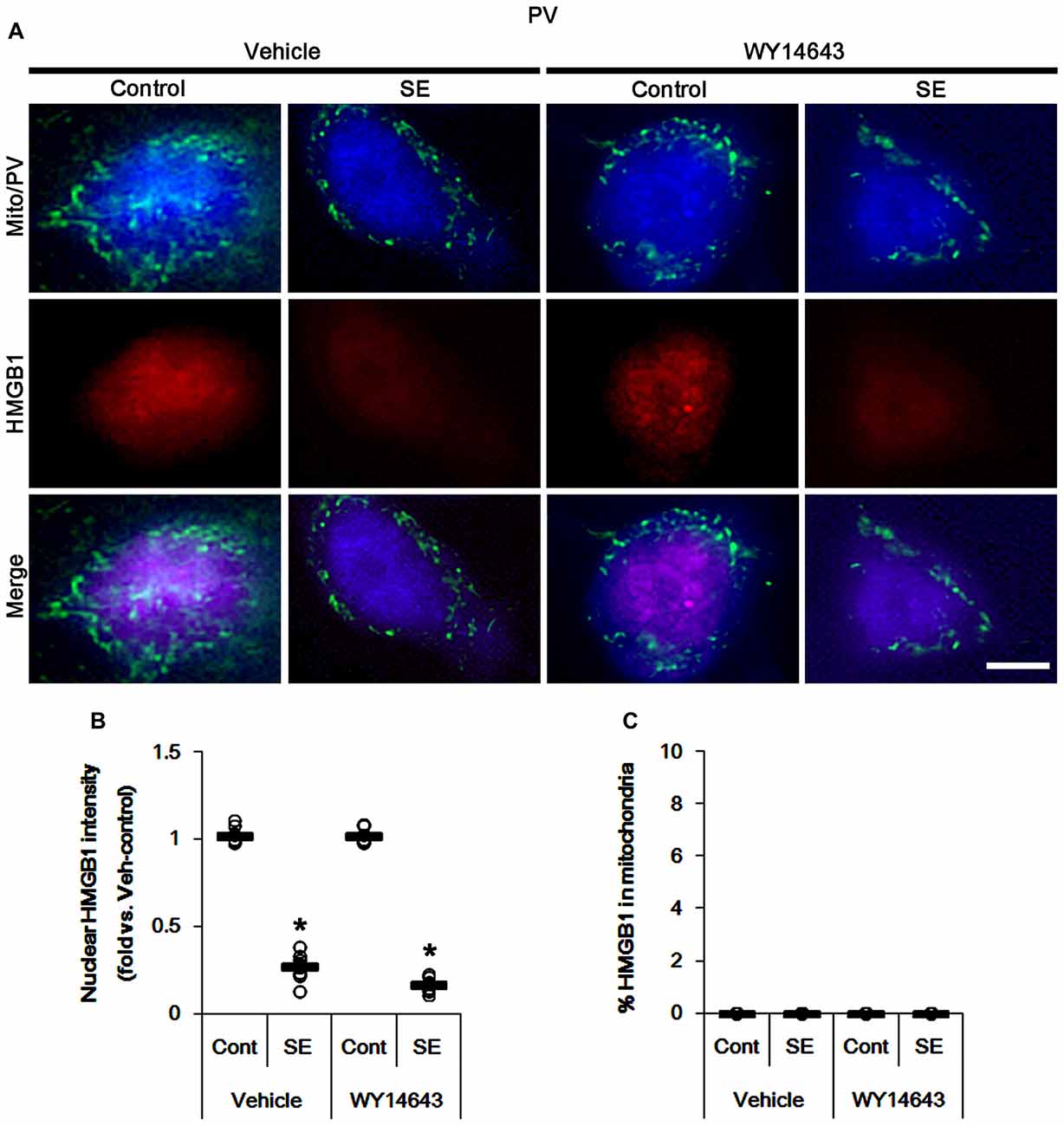 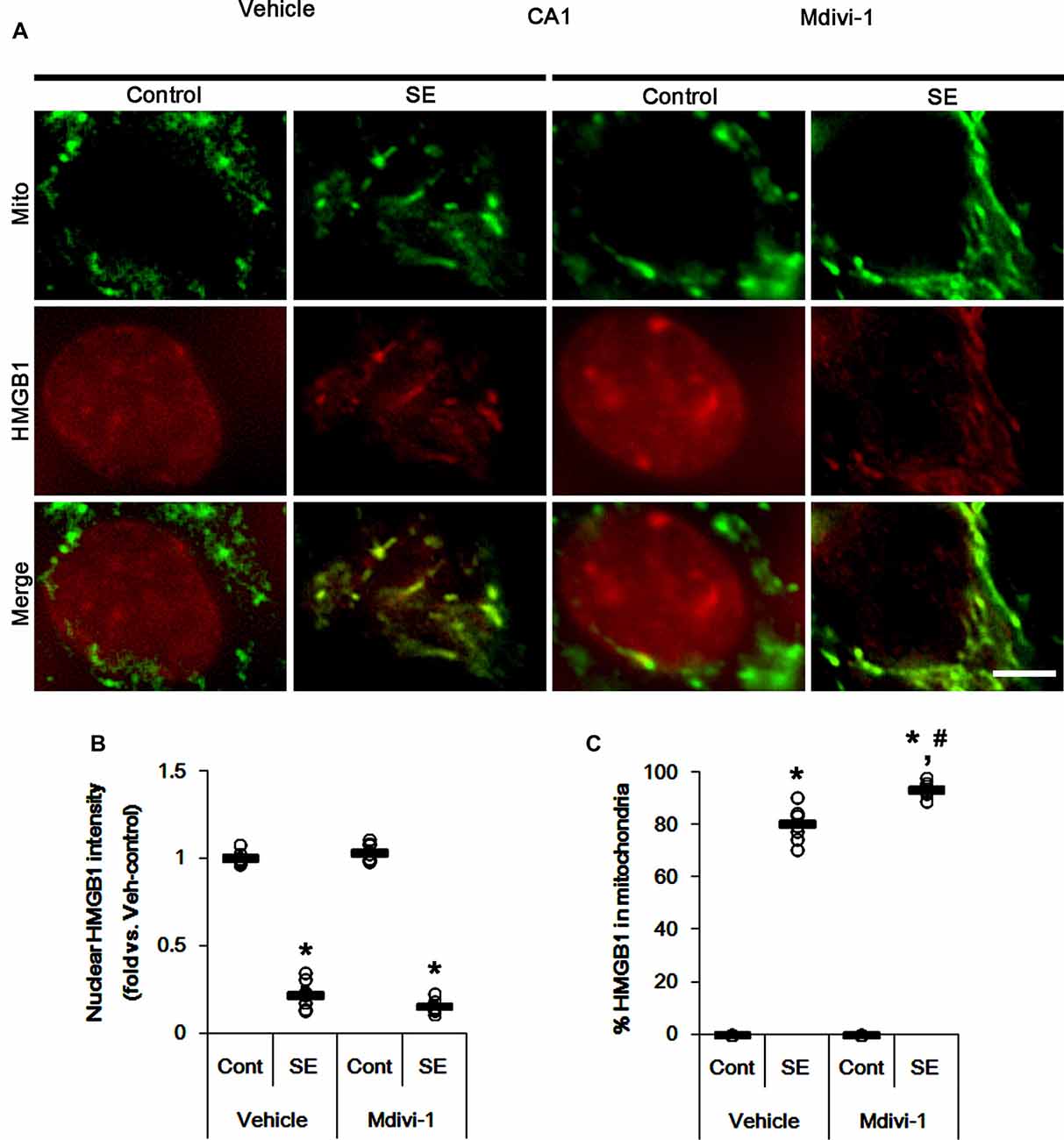 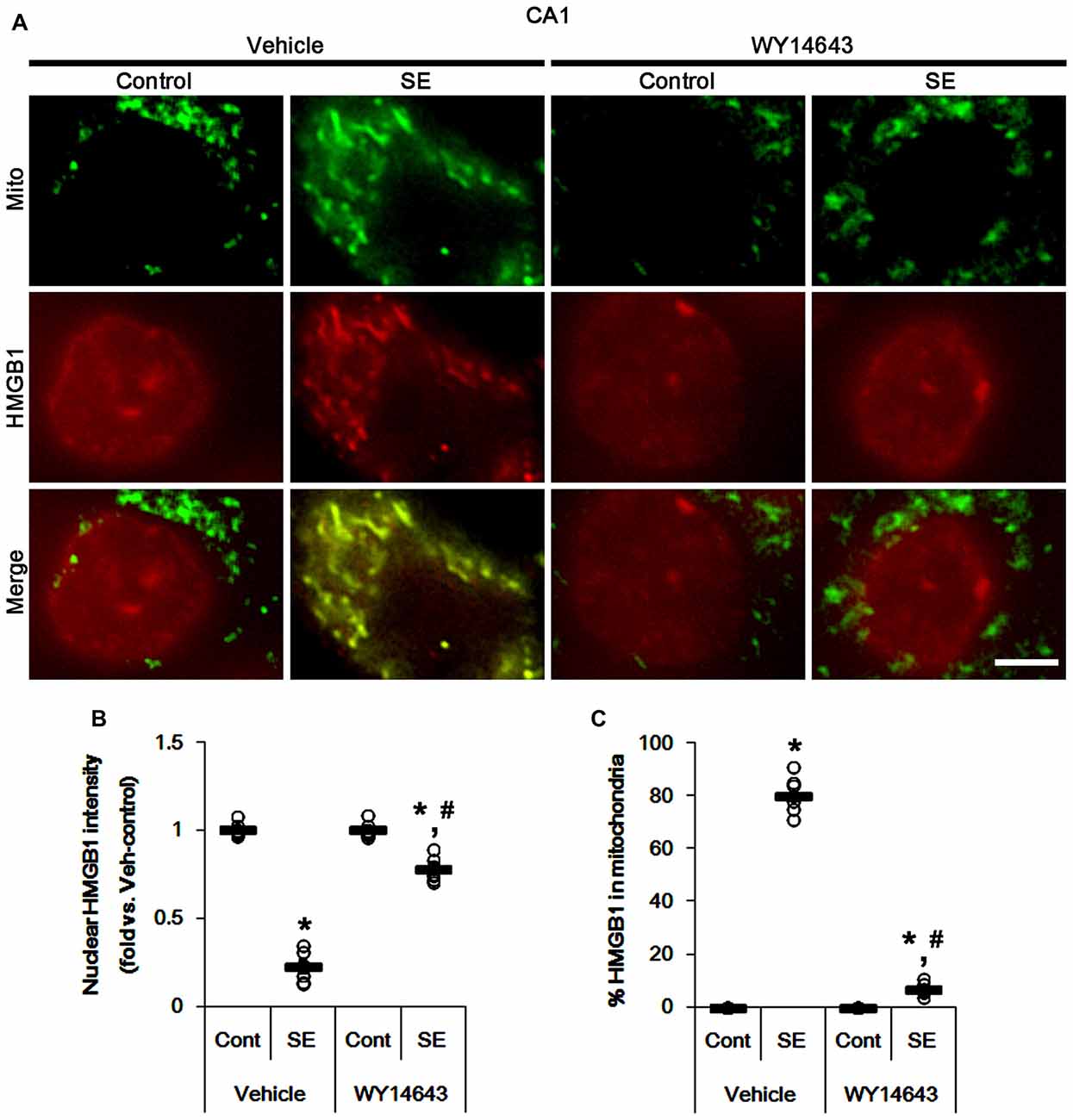 Recently, we have reported that excessive mitochondrial fissions lead to apoptosis of PV cells in dentate gyrus following SE (Kim and Kang, 2017), while aberrant mitochondrial elongations evokes programed necrosis of CA1 neurons and dentate granule cells (Kim et al., 2014; Hyun et al., 2016; Ko and Kang, 2017). Consistent with these previous studies, the present data show that SE resulted in degenerations of PV cell and CA1 neurons accompanied by abnormal mitochondrial fission and fusion, respectively. Since mitochondrial dynamics are one of the important adaptive responses to the stressful stimuli (Chen and Chan, 2009; Rintoul and Reynolds, 2010), these findings indicate that the distinct impairment of mitochondrial dynamics may cause the different SE-induced cell death pattern between PV cells and CA1 neurons. However, the present study demonstrates that under physiological condition the inductions of mitochondrial fission or fusion by WY14643 and Mdivi-1 did not evoke neuronal death. Thus, it is likely that other factors may be involved in abnormal mitochondrial dynamics-mediated neuronal death under pathophysiological conditions.

Why do PV cell and CA1 neurons show the distinct patterns of mitochondrial dynamics in response to pilocarpine-induced SE? We could not directly address this issue. Interestingly, the controversial effects of Mdivi-1 on SE-induced neuronal death would be considerable. Some reports demonstrate that Mdivi-1 attenuates neuronal loss after SE (Qiu et al., 2013; Xie et al., 2013), similar to the case of PV cells in the present study. However, the present study reveals that Mdivi-1 deteriorated SE-induced CA1 neuronal death. These discrepancies are resulted from the distinct methodology inducing SE: 1 h-lasting SE (Qiu et al., 2013; Xie et al., 2013) vs. 2 h-lasting models. Indeed, the differences in seizure activity lead to the distinct consequences on SE-induced neuronal death. Therefore, it is likely that the disparities in seizure susceptibility or firing rates during ictal stage may distinctly influence mitochondrial dynamics in different neuronal subpopulations. To validate this hypothesis, further studies are needed.

In conclusion, to the best of our knowledge, the present data provide the first evidence that SE-induced aberrant mitochondrial dynamics were involved in the mitochondrial translocations of active caspase-3 and HMGB1 in PV cells and CA1 neurons, respectively. Furthermore, these phenomena were closely relevant to the differential cell death patterns of PV cell and CA1 neurons in response to SE. Therefore, the identification of mitochondrial permeable molecules and their preferential events will be interesting and considerable topics to understand the cell death mechanisms relevant to impaired mitochondrial dynamics.

Copyright © 2018 Kim and Kang. This is an open-access article distributed under the terms of the Creative Commons Attribution License (CC BY). The use, distribution or reproduction in other forums is permitted, provided the original author(s) and the copyright owner(s) are credited and that the original publication in this journal is cited, in accordance with accepted academic practice. No use, distribution or reproduction is permitted which does not comply with these terms.