Ankfy1 Is Involved in the Maintenance of Cerebellar Purkinje Cells

Purkinje cells are critical for the function of cerebellum. The degeneration of Purkinje cells leads to defects in motion control. We have found that Purkinje cells specifically express Ankfy1 protein during development and in adult. This protein seems to play minor functions during development as Ankfy1 knockout mice appear normal till adult. However, at 9-month-old, knockout mice showed abnormal cerebellum with reduced vermis size and developed defective motor function. Further investigation demonstrated that the cerebellum of the mutant mouse has lost most of its Purkinje cells, while other cerebellar cells remained largely normal. Our data suggested that the Ankfy1 might be important for the maintenance of cerebellar Purkinje cells.

The Purkinje cells (PCs) is important for the function of cerebellum. As the only output cell type in cerebellar cortex, the PC is a highly specialized cell type with a big pear-shaped cell body and a large dendritic arbor. The soma of PC is located between the outer molecular layer and the inner granular layer, forming the PC layer. Functionally, PCs are critical for motor control, involved in the planning and fine-tuning of movement and coordination (Medina, 2011). Clinically, the loss of PCs would result in cerebellar ataxia. For now, at least 49 subtypes of spinocerebellar ataxias (SCA) have been reported with the common feature of neurodegenerative PC loss (Huang and Verbeek, 2019).

We have found a membrane-bound protein, Ankfy1, specifically expressed in mouse PCs. Previously, we reported that the knockout mice showed no obvious phenotype during development and in young adults (2 months) if they survived early embryonic stages, as the homozygotes experienced embryonic lethality in pure genetic background (Weng et al., 2016). In the mixed background mouse line, we found the knockout mice gradually developed motor dysfunction, which is quite obvious at 9-month-old. A series of experiments were performed and revealed that the knockout mice underwent cerebellar PC degeneration as the mice aged.

The generation of Ankfy1 knockout mice has been previous reported (Weng et al., 2016). Briefly, the chimera mouse was ordered from the Mutant Mouse Resource and Research Center (MMRRC, UC Davis, CA, USA). The mice were housed in the Center for Animal Experiments/Animal Biosafety Level-III Laboratory in Wuhan University in accordance with the National Institutes of Health Guide for the Care and Use of Laboratory Animals (National Research Council Publication, 1996 edition) and the protocol was approved by the Institutional Animal Care and Use Committee of Wuhan University.

Only male mouse was used with at least three animals for any group throughout the study. All the Ankfy1 knockout mice in this study are of generation 3 or 4 with C57BL/6 mice.

Mice were tested using a rotarod apparatus (YLS-4C, Ruanlong Tech., Shanghai) to evaluate their motor performance. The protocol consists of 3 days of training at a constant speed (10 rpm) for 10 min in three trials, with a 10-min interval between each trial. On the fourth day, the animals were subjected to four trials on an accelerating rod (4–30 rpm, 5 min) with a 10-min interval between each trial. Rotarod performance was quantified by recording the latency to fall off the apparatus.

Ankfy1 Is Expressed in Purkinje Cells

We studied the expression of Ankfy1 in the mouse cerebellum. In situ hybridization experiments revealed that Ankfy1 mRNA appears in the outer edge of the developing cerebellum at early stages (P0, P5) (Figure 1). At P14, Ankfy1 mRNA is expressed in the newly appeared PCs (Figure 1), which was confirmed by double staining of calbindin, a specific marker for the PCs (Figure 2). At later developing stages such as P21 (Figure 1) and P30 (data not shown), Ankfy1 continues to be expressed in PCs. In adults (P60), mouse PCs keep on expressing Ankfy1 (Figures 1, 2). 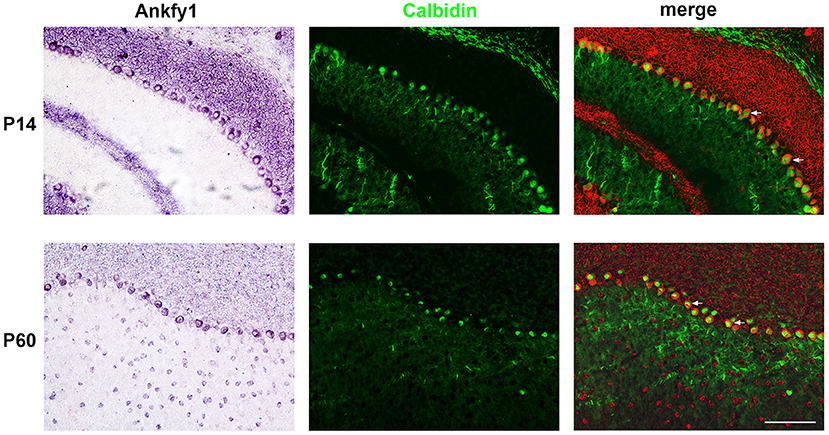 Our previous work reported no observed defects in young ankfy1 knockout mice till 2 months old. Histopathology study of major organs in mutant mice revealed no obvious abnormity including cerebellum. The shape and number of PCs showed no difference between homozygotes and wildtype littermates at 2-month-old (Weng et al., 2016). However, in this study we found that the cerebellum in Ankfy1 knockout mice is morphologically different from that in the wildtype mice at 9 months old. The cerebellar vermis of knockout mice is obviously reduced compared with that of wildtype mice. The morphology change is more recognizable when the ratio of the vermis width to the hemisphere width is measured. The width of cerebellar vermis in the knockout mouse is about the same as that of the cerebellar hemisphere, while in wildtype mice, the width of vermis is significantly bigger than that of the cerebellar hemisphere (Figure 3). These results suggested that Ankfy1 may not important for cerebellar development but critical for its maintenance. 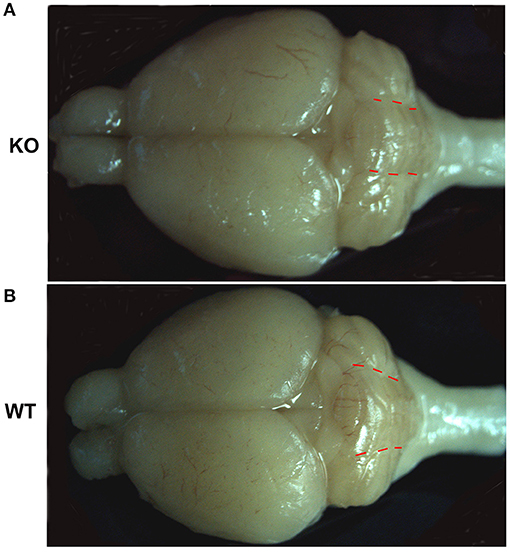 Figure 3. The representative whole brain pictures of Ankfy1 knockout mice (A) and the wildtype littermates (B) at 9 months. The red dotted lines demarcate the border between the cerebellar vermis and the cerebellar hemisphere.

Further study showed that the cerebellum of knockout mouse underwent cellular degeneration at an old age. At 9-month-old, the number of calbindin positive Purkinje cells has greatly decreased in the mutant mice compared with that in the wildtype littermates (Figure 4). We have also checked other neural cell types. Parvalbumin is a calcium-binding protein, which is expressed mostly in Basket and stellate cells in molecule layers and Purkinje cells (Bastianelli, 2003). Results showed that parvalbumin positive cells in the molecular layer are the same between knockout mice and wildtype littermates, while most of the parvalbumin positive cells in the Purkinje cell layer are lost in the knockout mice (Figure 4). We also examined the expression of Zic proteins, which are expressed in granule cells in the granular layer (Borghesani et al., 2002). No difference of Zic expression is found between the knockout mice and the wildtype littermates (Figure 4). We also checked with astrocyte marker (GFAP) and found no obvious changes between the wildtype and the KO mice (Figure 4). Results suggested that Ankfy1 knockout mice underwent Purkinje cell degeneration without significant gliosis. 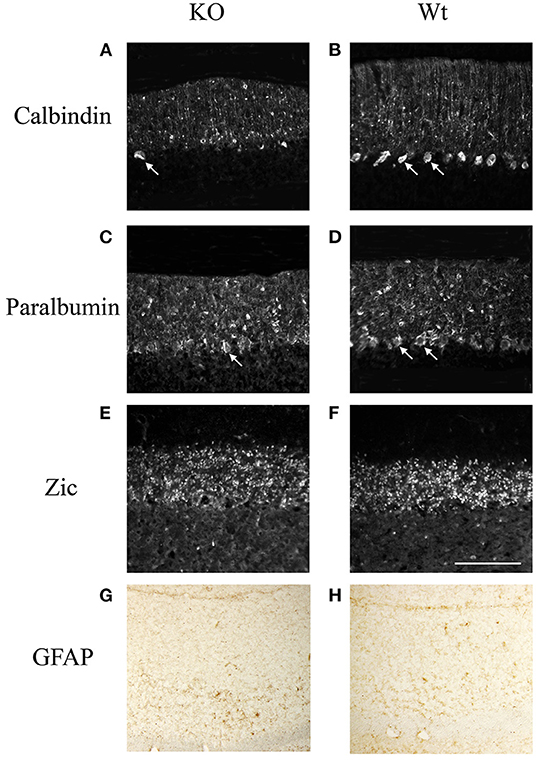 At 9 months old, the homozygotes showed some movement disorders. The rotarod experiment was performed. The results showed that mutant mice stayed on the rolling bar for a much shorter time than the wildtype littermates. We used an acceleration mode for the rotacod test. The results also indicated that the mutant mice fell off the apparatus at much lower rolling speeds than the wildtype littermates (Figure 5). From this experiment, we concluded that Ankfy1 mutant mice experienced some motor dysfunction. 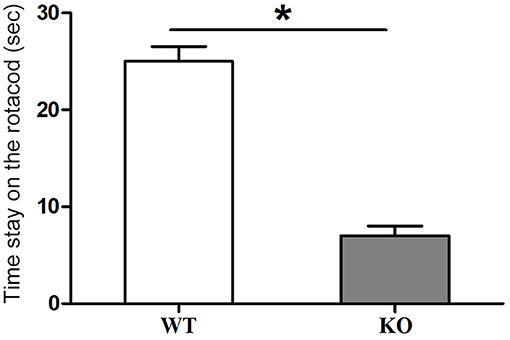 Function of Ankfy1 in the Development and Maintenance of Neural Cells

Ankfy1 is expressed very early in the developing central nervous system. During early development, Ankfy1 is expressed in the neural stem cells. It appears in the ventricular zone of the spinal cord and forebrain where the neural stem cell/progenitor cell located (Weng et al., 2016). In this study, we found it is also expressed in the outer edge of the cerebellum at early stages where the germinal zone located. However, our previous study revealed that Ankfy1 does not play an active role for neural development. The development process seems normal for neural stem cells/progenitors, neurons and glia in the ankfy1 knockout mice. The knockout mice develop normally if they survive early embryonic stages and showed no obvious defects in their young adulthood. Histopathological examination and behavior study revealed no abnormality in the knockout mice at 2-month-old (Weng et al., 2016). However, it has been noticed that Ankfy1 knockout mice died in early embryonic stages in pure genetic background and the reason has been speculated to be functional roles of Ankfy1 in extraembryonic tissues (Weng et al., 2016).

We have noticed a previous study claiming Ankfy1 is important for PC development (Ding et al., 2017). We have not observed any developmental defects in Ankfy1 knockout mice. It is interesting to note that all the data from this paper are based on the work on Ankfy1 heterozygotes. We have showed that in pure background Ankfy1 knockout mice had extraembryonic tissue defects and died before E13.5 (Weng et al., 2016). Since this work contained no data from homozygotes, we suspect that their mutant mice are in pure genetic background. Their observation could be the phenotype caused by defective extraembryonic tissues.

Ankfy1 protein is a membrane protein. It can bind to small GTPase RAB5 (Ito et al., 1999). Studies showed that it involved in intracellular endosome/vesicle trafficking (Schnatwinkel et al., 2004; Zhang et al., 2012). It is also part of PDGF signaling pathway. Loss of Ankfy1 could cause a small decrease (30%) of the PDGF signaling (Schmees et al., 2012; Nehru et al., 2013). This small shortage of growth factor signaling could be detrimental for neuronal cells. Studies have shown that one of the reasons for neurodegenerative diseases is the decreased levels of growth factors (Zuccato and Cattaneo, 2009; Bartus and Johnson, 2017). It is likely that Ankfy1 loss leads to a small disturbance PDGF signaling which would significantly affect the PC survival. It is worth noting a previous study on Ascl2 protein. Ascl2 is also a RAB5 binding protein involved in endocytosis. Als2-null mice showed a slowly progressive loss of cerebellar Purkinje cells without obvious developmental abnormalities, which is very similar to the phenotype of Ankfy1 knockout mice. This PC loss may be caused by defective EGF signaling as analysis showed significantly smaller-sized EGF-positive endosomes in Als2-null fibroblasts (Hadano et al., 2006).

Clinically, hereditary neurodegenerative disorders caused by pervasive Purkinje cell loss in the cerebellum are named as spinocerebellar ataxias (SCA). For now, there are 49 subtypes of SCA, among which 38 causative genes have been identified (Huang and Verbeek, 2019). However, Ankfy1 gene is not one of them. In year 2007, a genetic study suspected three novel genes as the causative genes in ataxia families. Ankfy1 is one of them. Further DNA sequencing found no abnormalities in coding regions in all three suspected genes (Bouslam et al., 2007). It is possible that Ankfy1 was dysregulated and altered levels of Ankfy1 led to ataxia in cases of this study.

Over all, we found that Ankfy1 is expressed in developing and mature PCs in cerebellum. The deficiency of Ankfy1 leads to the degeneration of PCs, but not the developmental defects. Since Ankfy1 protein is a membrane protein involved in growth factor signaling, the loss of Ankfy1 would attenuate the growth factor signaling which is critical for PC survival. Further study on Ankfy1 would be helpful to understand the mechanism of PC degeneration and help to develop therapies for SCA diseases.

The original contributions presented in the study are included in the article/supplementary materials, further inquiries can be directed to the corresponding authors.

The animal study was reviewed and approved by the Institutional Animal Care and Use Committee of Wuhan University.

Copyright © 2021 Chang, Soomro, Zhang and Fu. This is an open-access article distributed under the terms of the Creative Commons Attribution License (CC BY). The use, distribution or reproduction in other forums is permitted, provided the original author(s) and the copyright owner(s) are credited and that the original publication in this journal is cited, in accordance with accepted academic practice. No use, distribution or reproduction is permitted which does not comply with these terms.