Autosomal dominant adult-onset demyelinating leukodystrophy (ADLD) is a very rare neurological disorder featured with late onset, slowly progressive central nervous system demyelination. Duplication or over expression of the lamin B1 (LMNB1) gene causes ADLD. In this study, we undertook a comprehensive clinical evaluation and genetic detection for a Chinese family with ADLD. The proband is a 52-year old man manifested with autonomic abnormalities, pyramidal tract dysfunction. MRI brain scan identified bilateral symmetric white matter (WM) hyper-intensities in periventricular and semi-oval WM, cerebral peduncles and middle cerebellar peduncles. The proband has a positive autosomal dominant family history with similar clinical manifestations with a trend of genetic anticipation. In order to understand the genetic cause of the disease in this family, target exome capture based next generation sequencing has been done, but no causative variants or possibly pathogenic variants has been identified. However, Multiplex ligand-dependent probe amplification (MLPA) showed whole duplication of LMNB1 gene which is co-segregated with the disease phenotype in this family. This is the first genetically confirmed LMNB1 associated ADLD pedigree from China.

Autosomal dominant adult-onset demyelinating leukodystrophy (ADLD) [MIM #169500] is a rare neurological disorder characterized by gradually increasing loss of white matter (WM) within the central nervous system (Coffeen et al., 2000). Majorly, leukodystrophy is manifested with early onset and started appearing in childhood. But the classical clinical symptoms of ADLD, such as autonomic dysfunction, ataxia and cognitive impairment, started to appear in the fourth or fifth decade of life. Brain MRI of ADLD patient’s usually identified with demyelination in brain and spinal cord WM (Schuster et al., 2011). It has previously reported that the familial form of ADLD has associated with chromosome 5q23–31 (Padiath et al., 2006). Padiath et al. (2006) first identified that the heterozygous duplications of the lamin B1 gene (LMNB1, chr5q23.2) is associated with ADLD. Hence, ADLD is related with the duplication or over expression of LMNB1 gene which leads to produce increased levels of LMNB1 protein. ADLD is one of the rare neurological disorders associated with copy number variation of a candidate gene.

In our present study, we identified the classical whole duplication in LMNB1 gene related ADLD in a Chinese family. We also demonstrated the significant usefulness of multiplex ligand-dependent probe amplification (MLPA) in course of clinical diagnosis of genetic disease caused by a copy number variation.

DNA samples obtained from the proband were sequenced using target exome-based next-generation sequencing. Roche NimbleGen’s (Madison, Wisconsin, WI, USA) custom Sequence Capture Human Array was used and designed to capture 88,233 kb of targeted sequence, covering 181 exons and flanking sequence (including the 100 bp of introns) of 54 genes (ABCD1, ACOX1, ALDH3A2, ARSA, ASPA, CSF1R, CYP27A1, DARS2, EARS2, EIF2B1, EIF2B2, EIF2B3, EIF2B4, EIF2B5, FAM126A, FUCA1, GALC, GBE1, GFAP, GJA1, GJC2, HEPACAM, HSD17B4, HTRA1, L2HGDH, MLC1, NOTCH3, PEX1, PEX10, PEX12, PEX13, PEX14, PEX16, PEX19, PEX2, PEX26, PEX3, PEX5, PEX6, PEX7, PLP1, POLR3A, POLR3B, PSAP, RNASEH2A, RNASEH2B, RNASEH2C, SAMHD1, SLC17A5, SOX10, SUMF1, TREM2, TREX1, TYROBP) which is associated with autosomal dominant cortical infarcted cerebral artery disease with WM lesions and yielded an average of 6,366,534 reads per sample, with approximately 68.78% mapping to the targeted regions. The average sequencing depth of the target area is 204.21 with 98.93% coverage. The procedure for preparation of libraries was consistent with standard operating protocols published previously. In each pooling batch, 10–33 samples were sequenced simultaneously on Illumina HiSeq 2500 Analyzers (Illumina, San Diego, CA, USA) for 90 cycles (specially designed by us for this study). Image analysis, error estimation and base calling were performed using Illumina Pipeline software (version 1.3.4) to generate raw data. The raw reads were screened to generate—clean reads∥ followed by established filtering criteria. Clean reads with a length of 90 bp were aligned to the reference human genome from the NCBI database (Build 37) using the Burrows Wheeler Aligner (BWA) Multi-Vision software package with output files in—bam∥ format. The bamdata were used for reads coverage in the target region and sequencing depth computation, SNP and INDEL calling, and CNV detection. First, a novel three-step computational frame work for CNV was applied. Then, SNPs and INDELs were called using SOAPsnp software and Sam tools pileup software, respectively. A SNP or INDEL was be filtered if it could not follow the criterion: supported by at least 10 reads and >20% of the total reads. The frequency filter was set at 0.05. If a SNP frequency was more than 0.05 in any of the four databases (dbSNP, Hapmap, 1000 Genomes Project, the 124 healthy reference samples sequenced in this study), it would be regarded as a polymorphism, but not a causative mutation.

Last, SNVs were retrieved in The Human Gene Mutation Database1 and the Leiden Open Variation Database2, and then labeled as reported or novel.

The first symptom of the proband (III-11) is occult-onset constipation around 50 years of age. Then he experienced evident sexual dysfunction. Due to there were several family members suffered from the same disease, he went to our hospital. At that time, he had no obvious motor complaints. Table 1 shows the clinical features in this family. Figure 1 shows the pedigree. 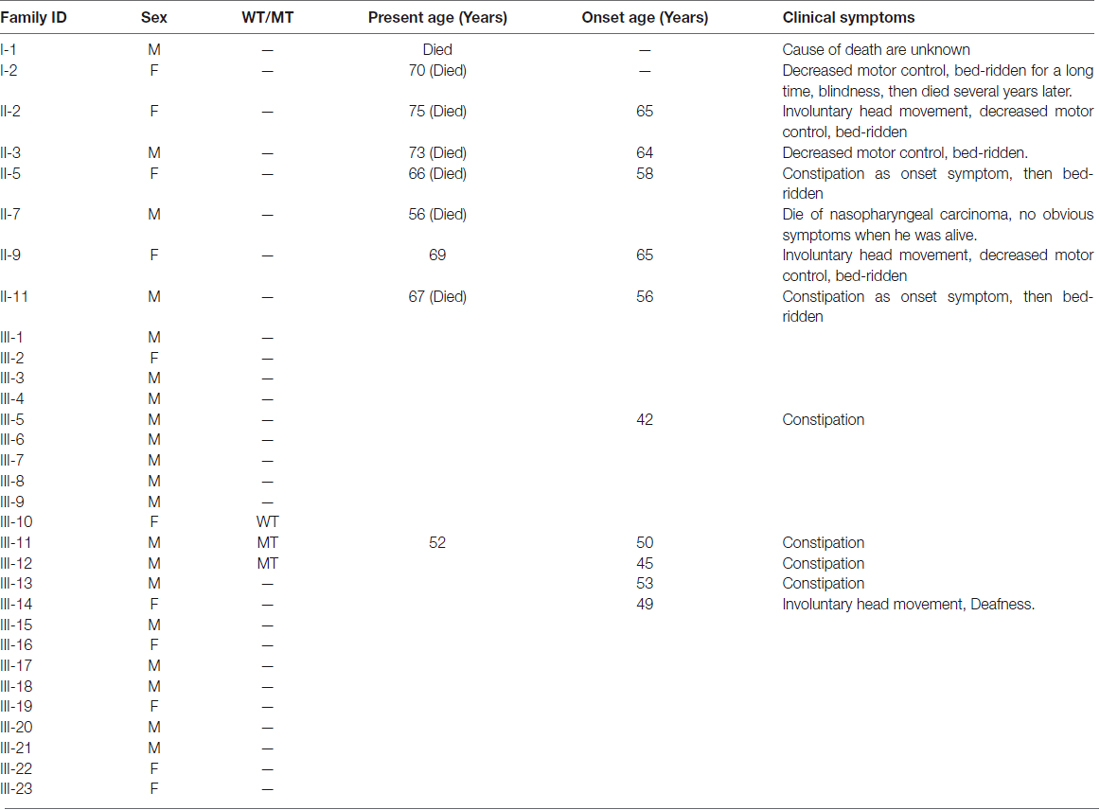 Table 1. Comprehensive clinical details of all the family members.

Global cognitive function measured by MMSE was normal with score of 27. While the MoCA score was 21, which was slightly decreased to the range of Mild Cognitive Impairment (MCI). 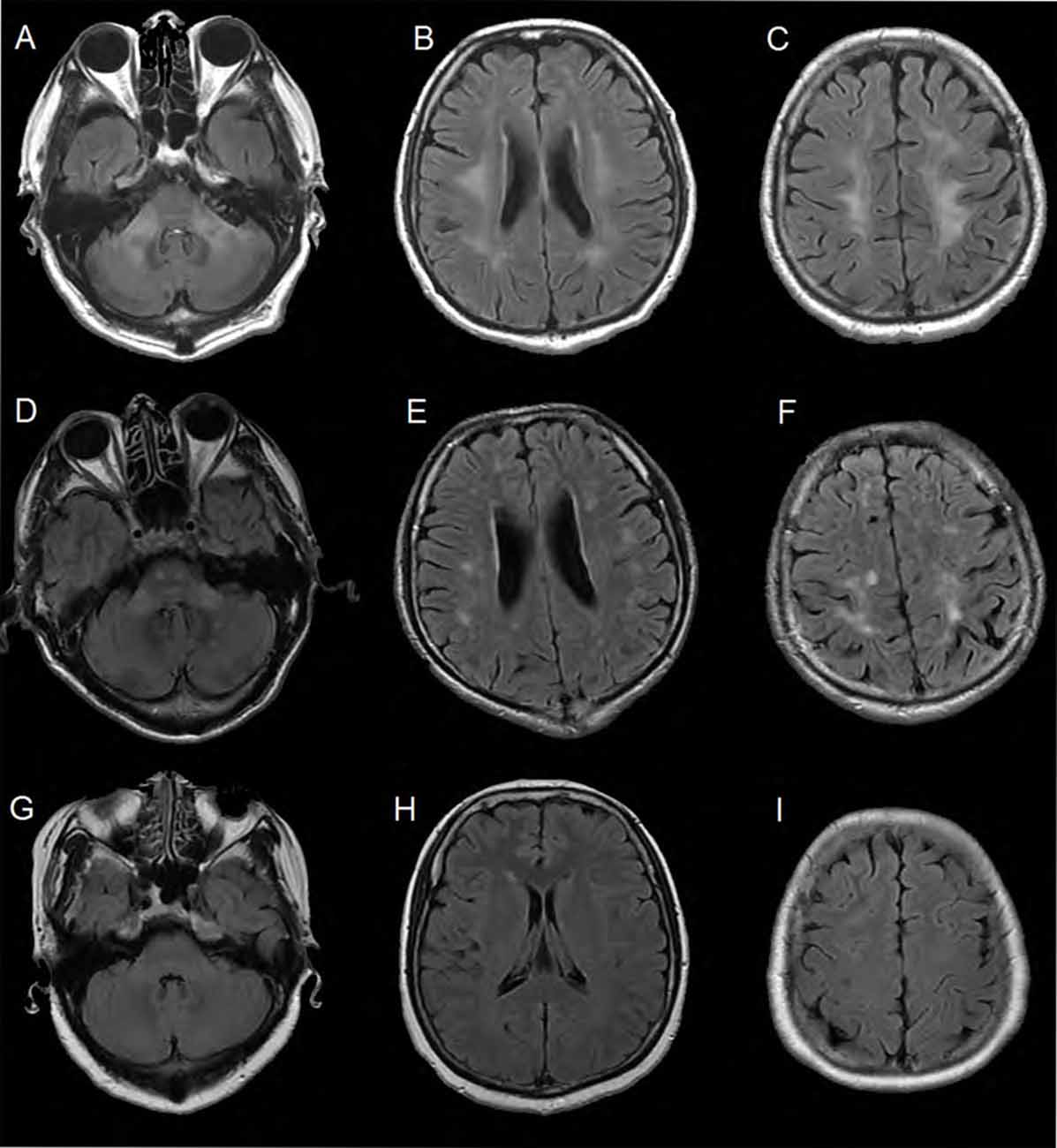 Next generation sequencing did not identify any causative or pathogenic variants in the proband.

MLPA experiment result shows that all of the exon (exon 1–11) of the LMNB1 gene was repeatedly mutated; the copy number of the entire gene was changed from 2 to 3. The ordinate is the number of copies of the amplified fragments; the abscissa is the chromosomal position coordinates of the amplified fragment. Different color bands play a differentiating role; the same color is identified as the same gene (Figures 3A–C). 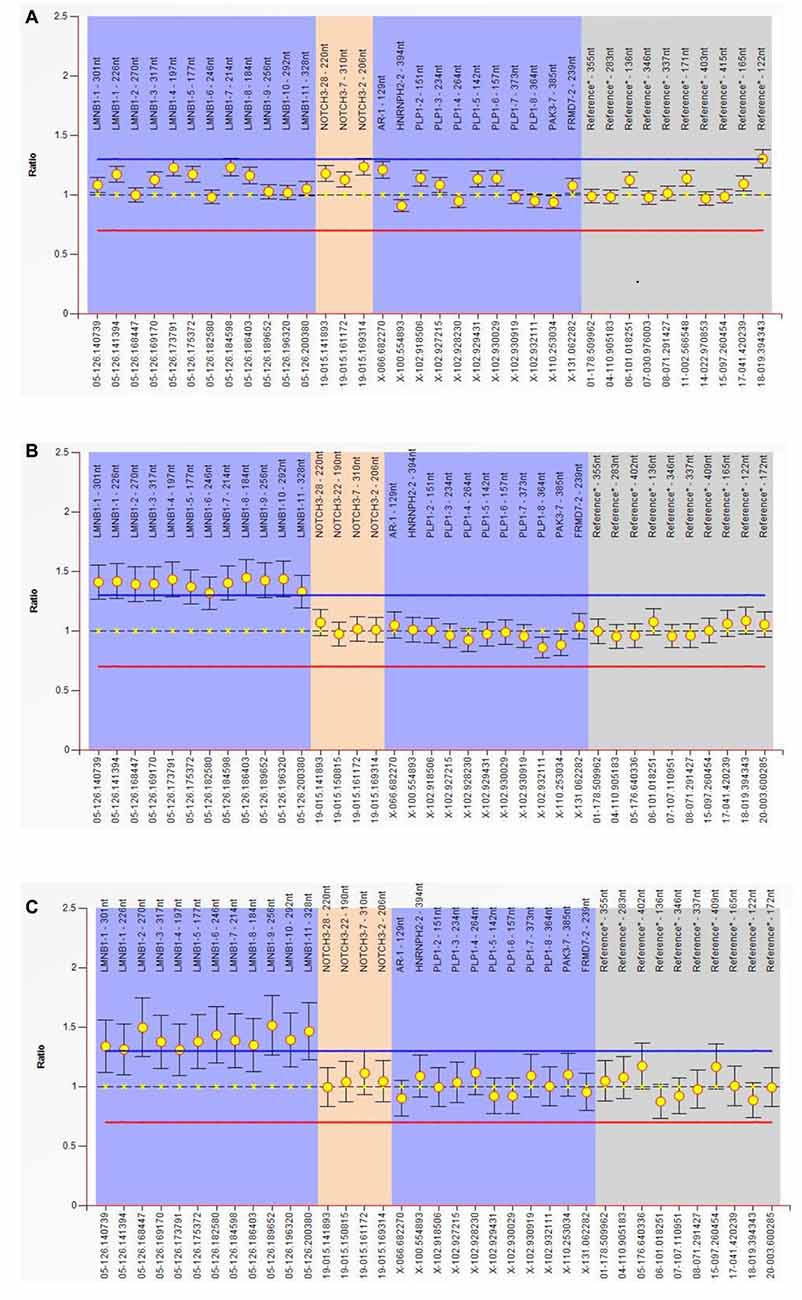 Figure 3. Multiplex ligand-dependent probe amplification (MLPA) experiment. Result show that all of the exon (exon 1–11) of the LMNB1 gene were repeatedly mutated, the copy number of the entire gene is changed from 2 to 3. The ordinate is the number of copies of the amplified fragments, the abscissa is the chromosomal position coordinates of the amplified fragment. Different color bands play a differentiating role; the same color is identified as the same gene (A–C). MLPA of III-10 (A), III-11 (B) and III-12 (C) has been described.

In our present study, we identified a three generation Chinese family with ADLD. After clinical diagnosis, MLPA found that whole genomic duplication for LMNB1 gene occur in patient and other affected family members of this family. The whole LMNB1 gene duplication is co-segregated with disease phenotype in this family.

Gene duplication through recombination is a spontaneous process having positive force for genome evolution. In addition, duplication of genes also shows dominant negative effect and leads to causes Mendelian disorders. Several affected families with ADLD from different ethnicity, has been reported with duplication of the LMNB1 gene. Over expression of any gene leads to the presence of excess protein probably occurs in all cells throughout the body. It has been described that a large Italian family with clinical symptoms similar with ADLD and molecular analysis showed that the disease was segregated with the LMNB1 locus, and over expression of LMNB1 mRNA and LMNB1 protein has been identified among all the affected family members. But comprehensive genetic analysis found that no alteration or copy number variation for LMNB1 gene (Brussino et al., 2010).

However, Eldridge et al. (1984) reported the first case of ADLD in a large kindred of American-Irish family with a progressive and fatal neurological WM disorder (Eldridge et al., 1984). In addition, later, ADLD has been reported in other population or ethnic groups including Italian, French-Canadian, Japanese, Swedish, and French (Asahara et al., 1996; Marklund et al., 2006; Melberg et al., 2006; Meijer et al., 2008; Brussino et al., 2009, 2010). But the Japanese family reported by Asahara et al. (1996) was only diagnosis by clinical manifestations and the pattern of inheritance, the family didn’t undergo gene detection. In this study, we report the first genetic diagnostic ADLD case in a three generation Chinese family. To our knowledge, this is the first LMNB1 related pedigree reported in East Asian population.

All the previous reports of ADLD associated with Chr. 5q23–q31 usually showed very similar clinical diagnostic symptoms. Generally, patients presented with autonomic dysfunction as a primary clinical symptom followed by loss of fine motor control or gait disturbances in the fourth or fifth decade of life (Schwankhaus et al., 1994; Coffeen et al., 2000). Various forms of bowel and bladder dysfunction along with sexual dysfunction are reported as the first presenting symptoms (Brussino et al., 2010). Similarly, our patient presented constipation as the first symptom around 50 years old. Constipation is a common symptom of the person suffered from the disease in this family.

However, cerebellar dysfunctions characterized by ataxia, nystagmus, dysmetria and action tremors are also major clinical symptoms for ADLD patients from different ethnic group. On the other hand, pyramidal tract impairment also influences the walking and upper limb function. Despite the proband had not manifested these symptoms, the patients in the first and second generations showed involuntary head movement, impaired movement control and then bed-ridden in the end (see Table 1). All these symptoms are typical manifestations in ADLD. In regard to movement problem, there are clinical variations in the reported family. The Italian kindred reported with ADLD were not presented with Ataxia (Brussino et al., 2010). Meijer et al. (2008) reported in a French-Canadian kindred only manifested as slightly affected dysdiadochokinesis.

In this study, we find genetic anticipation in the pedigree. The patients of the second generation typically had the onset around 60 years old, while those of the third generation reported the first manifestation around 50 years old. This pattern is not reported in the previous study. Maybe the development of medicine makes the patients realize their disease earlier.

In conclusion, we describe the first Chinese ADLD family in which disease pathogenesis is caused by the “classical” molecular mechanism of LMNB1 duplication, which expand the geographic and ethnic map of this disease.

YD, YM, SLi, SB and LJ designed the study. SLiang performed the molecular diagnosis by Sanger sequencing. SB carried on the bioinformatic analysis. YD and QL contributed to the molecular diagnosis analysis based on NGS. YM, BP, LC, YY and LJ worked on the clinical study. YD and SLi contributed to the Sanger sequencing validation and MLPA. YD, SLi and LJ wrote the article. All authors read and approved the final manuscript.

We thank the patient and the family for participating in this study.

Copyright © 2017 Dai, Ma, Li, Banerjee, Liang, Liu, Yang, Peng, Cui and Jin. This is an open-access article distributed under the terms of the Creative Commons Attribution License (CC BY). The use, distribution or reproduction in other forums is permitted, provided the original author(s) or licensor are credited and that the original publication in this journal is cited, in accordance with accepted academic practice. No use, distribution or reproduction is permitted which does not comply with these terms.