Huntington’s disease (HD) is a neurodegenerative disorder caused by a tandem repeat mutation encoding an expanded polyglutamine tract in the huntingtin protein, which leads to cognitive, psychiatric and motor dysfunction. Exposure to environmental enrichment (EE), which enhances levels of cognitive stimulation and physical activity, has therapeutic effects on cognitive, affective and motor function of transgenic HD mice. The present study investigated gene expression changes and behavioral pharmacology in male and female R6/1 transgenic HD mice at an early time-point in HD progression associated with onset of cognitive and affective abnormalities, following EE and exercise (wheel running) interventions. We have demonstrated changes in expression levels of the serotonin (5-HT) receptor Htr1a, Htr1b, Htr2a and Htr2c genes (encoding the 5-HT1A, 5-HT1B, 5-HT2A and 5-HT2C receptors, respectively) in HD brains at 8 weeks of age, using quantitative real-time PCR. In contrast, expression of the serotonin transporter (SerT, also known as 5-HTT or Slc6a4) was not altered in these brains. Furthermore, we identified region-specific, sex-specific and environmentally regulated (comparing EE, exercise and standard housing conditions) impacts on gene expression of particular 5-HT receptors, as well as SerT. For example, SerT gene expression was upregulated by exercise (wheel running from 6 to 8 weeks of age) in the hippocampus. Interestingly, when EE was introduced from 6 to 8 weeks of age, Htr2a gene expression was upregulated in the cortex, striatum and hippocampus of male mice. EE also rescued the functional activity of 5-HT2 receptors as observed in the head-twitch test, reflecting sexually dimorphic effects of environmental stimulation. These findings demonstrate that disruption of the serotonergic system occurs early in HD pathogenesis and, together with previous findings, show that the timing and duration of environmental interventions are critical in terms of their ability to modify gene expression. This study is the first to show that EE is able to selectively enhance both gene expression of a neurotransmitter receptor and the functional consequences on behavioral pharmacology, and links this molecular modulation to the therapeutic effects of environmental stimulation in this neurodegenerative disease.

Huntington’s disease (HD) is a neurodegenerative disorder characterized by a triad of symptoms: cognitive deficits culminating in dementia, psychiatric symptoms such as depression and motor dysfunction including uncontrolled movements (chorea). Cognitive deficiencies and psychiatric symptoms begin prior to clinical diagnosis (motor onset) of HD (Zimbelman et al., 2007; Tyebji and Hannan, 2017). The brains of patients diagnosed with HD can display little or no detectable pathological change post-mortem (Vonsattel et al., 1985; Mo et al., 2015). Therefore, understanding subtle molecular changes that occur before clinical onset is very important, and may identify novel therapeutic targets. Transcriptional dysregulation is one of the characteristics of HD pathogenesis and is a possible pathological mechanism of action within the HD brain. Reversing abnormal gene expression may prevent downstream changes leading to neuronal dysfunction. Therefore, identifying early changes in gene expression is an important step in understanding HD pathogenesis and identifying potential therapeutic targets. It is these early changes that need to be targeted with therapies if HD progression is to be stopped or delayed.

We therefore looked for changes in gene expression in the R6/1 transgenic mouse model of HD at early stages of pathogenesis (8 weeks of age) and also investigated the effects of EE and exercise (wheel running) on these HD mice and WT controls. Our prior findings (Renoir et al., 2011, 2012, 2013; Du et al., 2012). Suggested that serotonergic dysfunction was occurring in R6/1 HD mice. Therefore, in the present study, candidates within the serotonergic system were chosen for investigation, revealing dysregulation in early stages of HD pathogenesis, and differential modulation by environmental interventions.

R6/1 hemizygote males (Mangiarini et al., 1996) were obtained from the Jackson Laboratory (Bar Harbor, ME, United States) and bred with CBB6 (CBAxC57/B6) F1 females to establish an R6/1 colony at the Florey Institute. These mice closely model HD and live for more than 6 months. Genotypes were determined by PCR (Mangiarini et al., 1996) with genomic DNA obtained from toe clips and mice were weaned at 3.5 weeks of age.

Mice were housed under a 12/12 light/dark cycle and food and water were provided ad libitum. Experiments were approved by the Howard Florey Institute Animal Ethics Committee and followed the guidelines of the National Health and Medical Research Council of Australia.

Mice were killed by cervical dislocation between 9 and 11:30 am over 3 days. Differently housed groups were randomly allocated into balanced batches to eliminate batch effects. For quantitative real-time PCR analysis of gene expression, brains were bisected and hippocampus, striatum and whole cortex dissected out. Samples were immediately frozen on dry ice and transferred to a -80°C freezer for storage until required.

To determine the optimal working volumes of forward and reverse primers, a set of primer dilutions was conducted in which different combinations of each primer ranging between 0.5 and 3 were used. The combination that yielded the lowest Ct-value was used as the optimal working volume (data not shown). Optimization of primer efficiencies was carried out prior to commencement of quantification experiments. The real-time PCR cycling conditions were: 50°C for 2 min, 95°C for 10 min, followed by 40 cycles of 95°C for 15 s and 60°C for 1 min. Each sample was processed in triplicate and melt curve analysis was performed on all samples. As a validated endogenous control, cyclophilin A was amplified in separate triplicate reactions for normalization.

Determination of the relative gene expression was performed using the 2-ΔΔCt method (Livak and Schmittgen, 2001). Briefly, the Ct values (threshold cycle at which the fluorescence intensity exceeds 10× the SD of background fluorescence) of the experimental genes and the control were determined for each sample. The difference in the Ct values of the mean of the experimental gene triplicates and the mean of the control triplicates was determined (ΔCt) for each mouse, normalizing for amount of cDNA in each reaction. The mean ΔCt for the WT SH group was calculated, to use as a calibrator, and subtracted from the ΔCt of all the mice and giving the ΔΔCt. Fold change was then determined by the formula 2-ΔΔCt.

Eight-week-old mice were injected with the 5-HT2A receptor agonist, 1-(2,5-dimethoxy-4-odophenyl)-2-aminopropane [(±)DOI] (1 mg/kg, i.p.) and immediately placed inside an observation area. The number of head-twitches the mice performed from 15 to 30 min post-injection was manually recorded (Renoir et al., 2011). 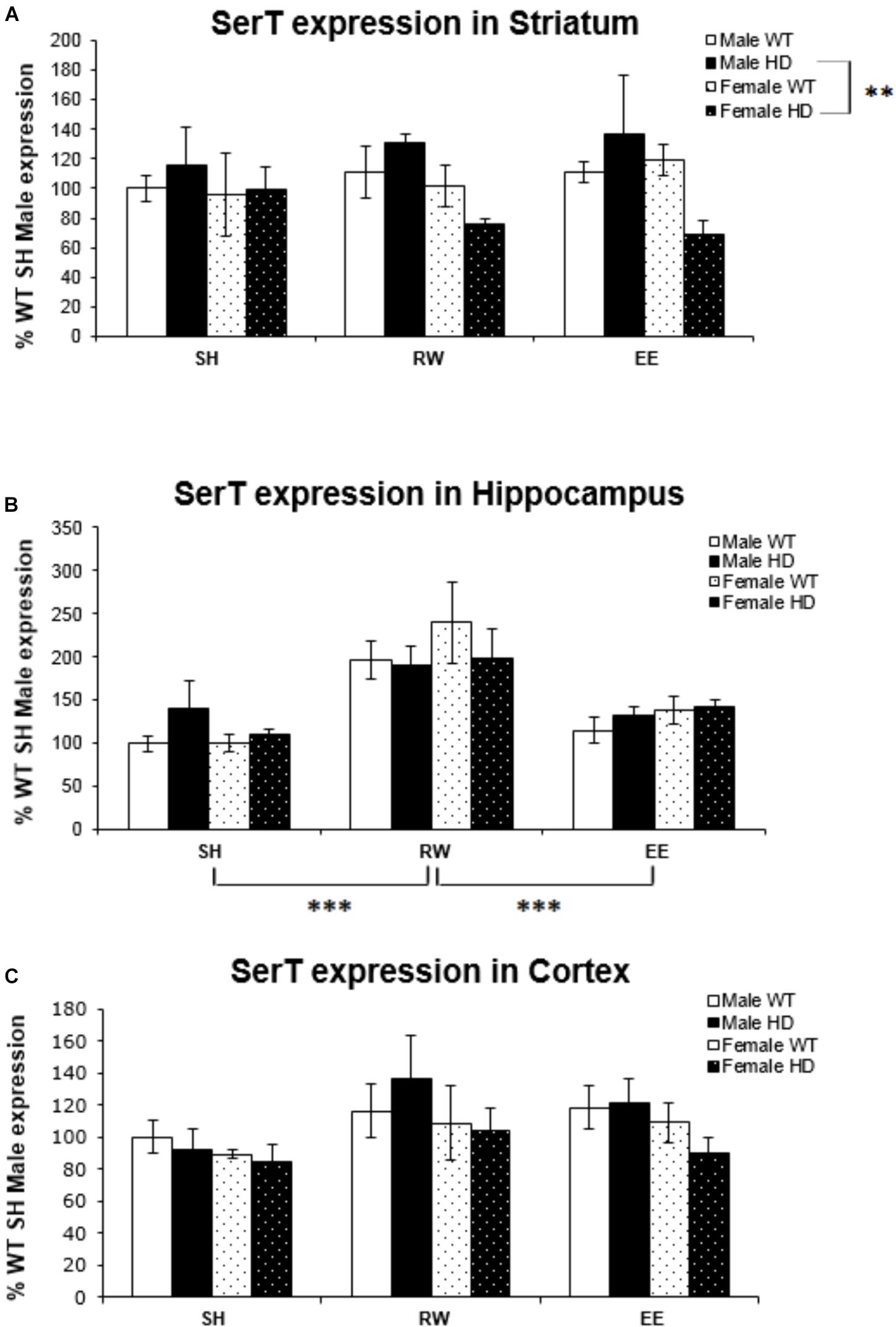 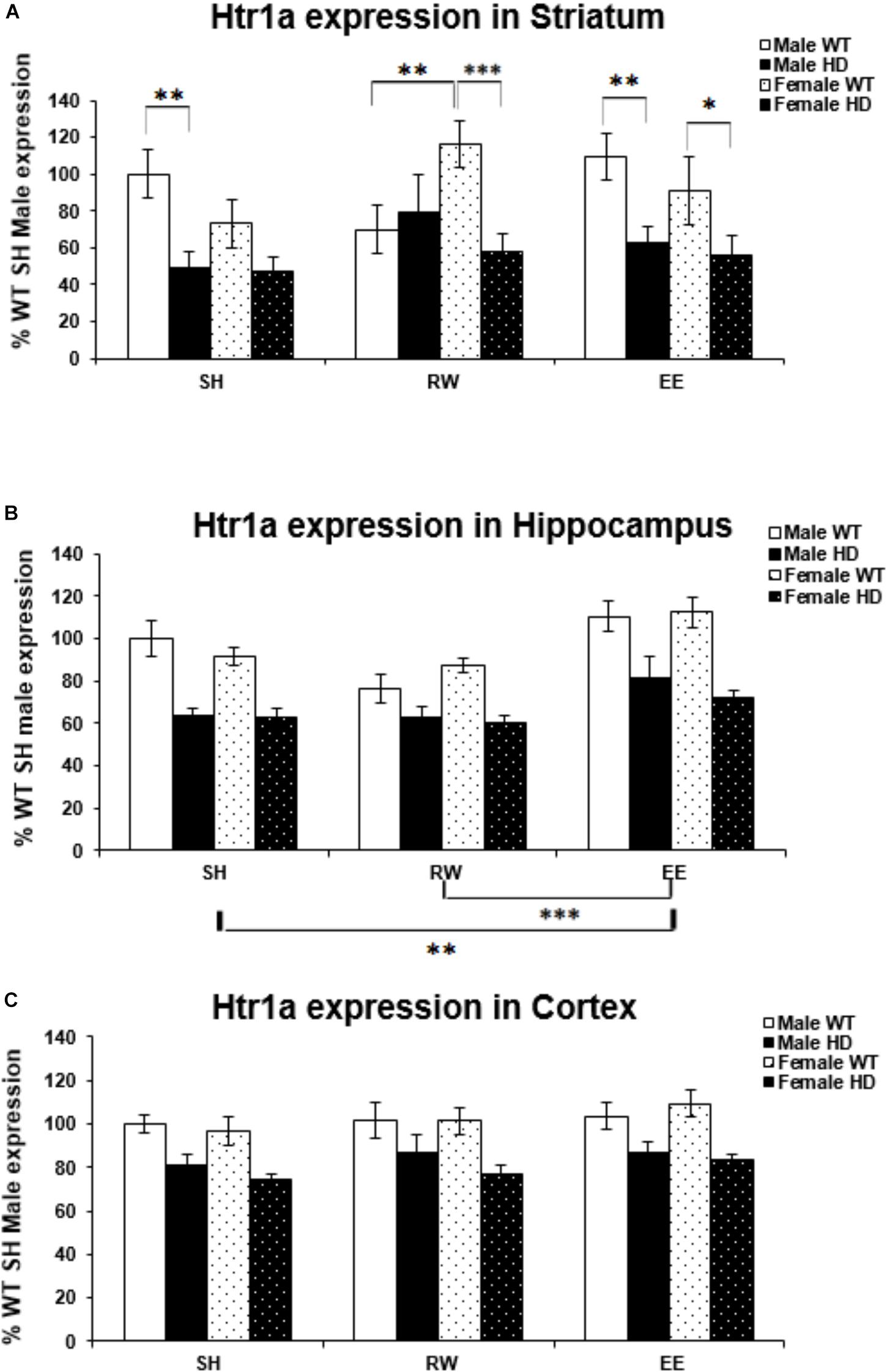 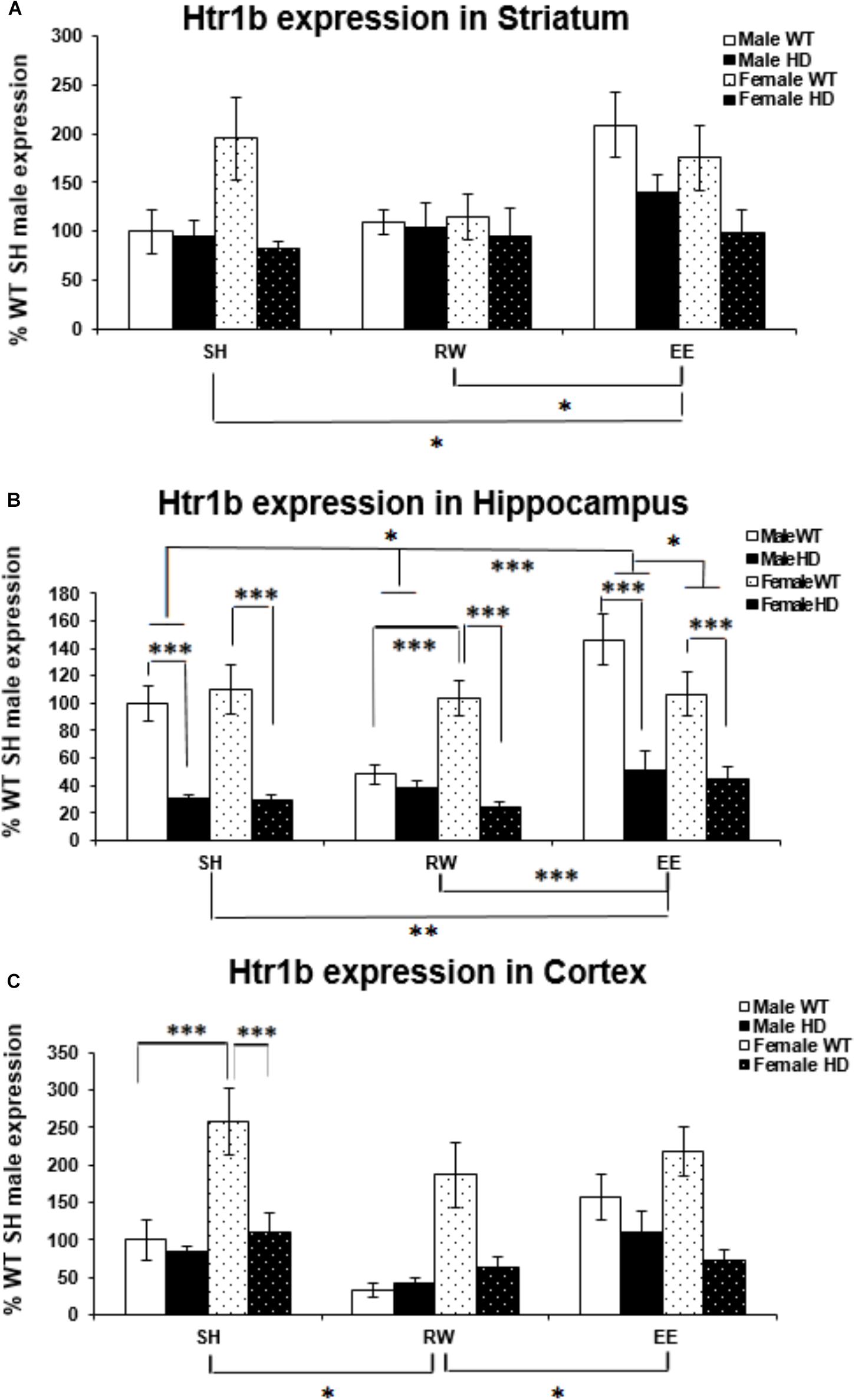 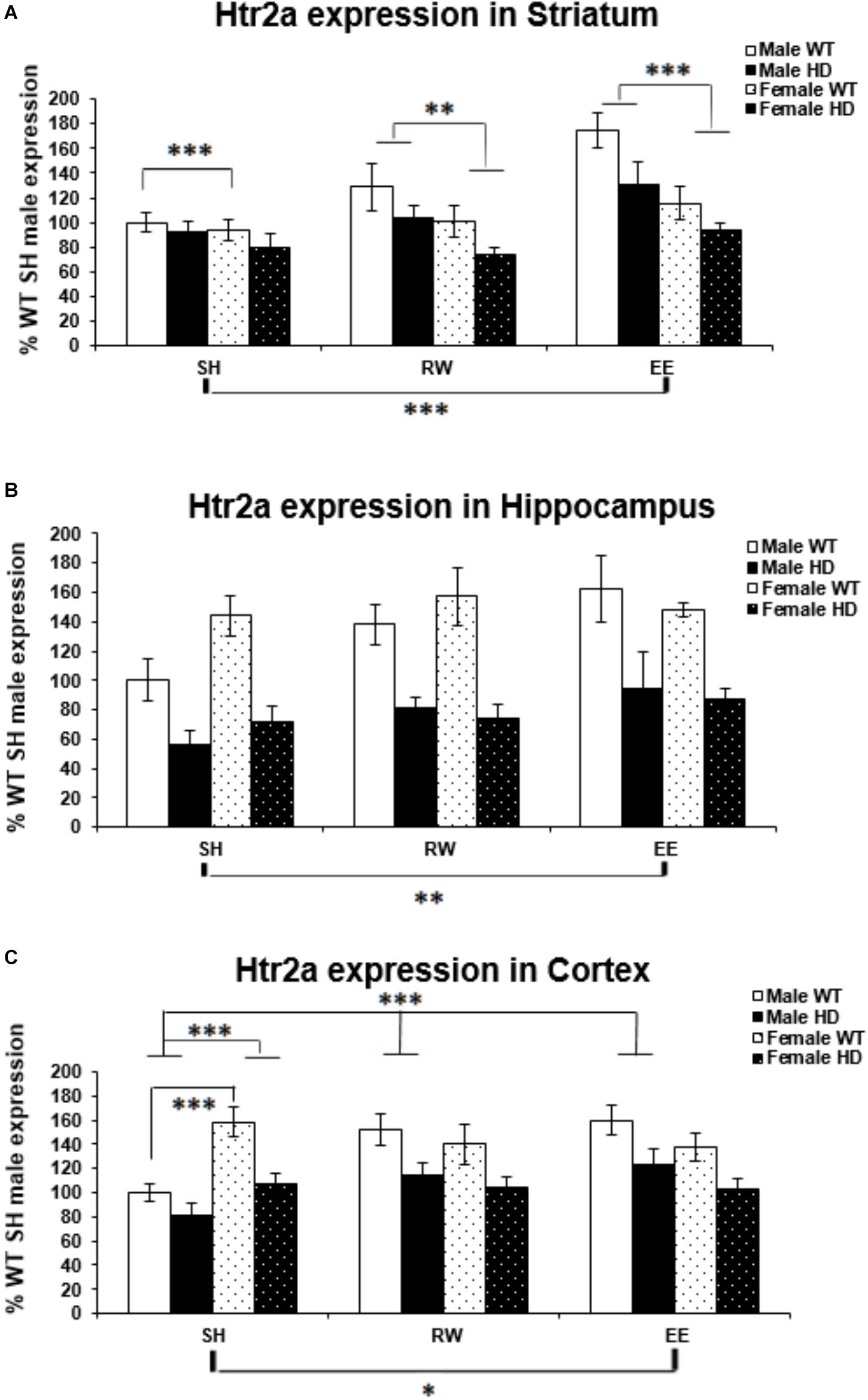 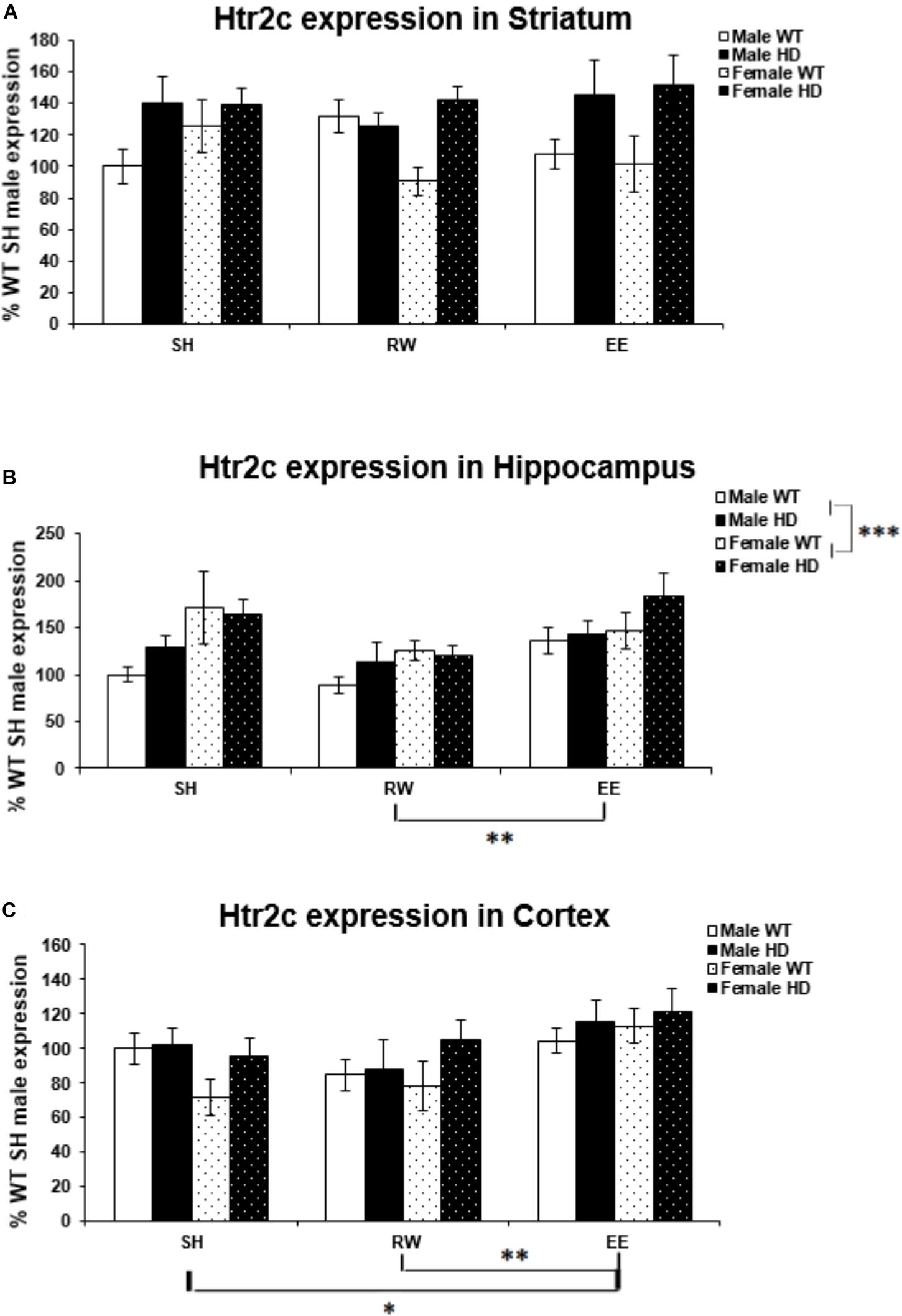 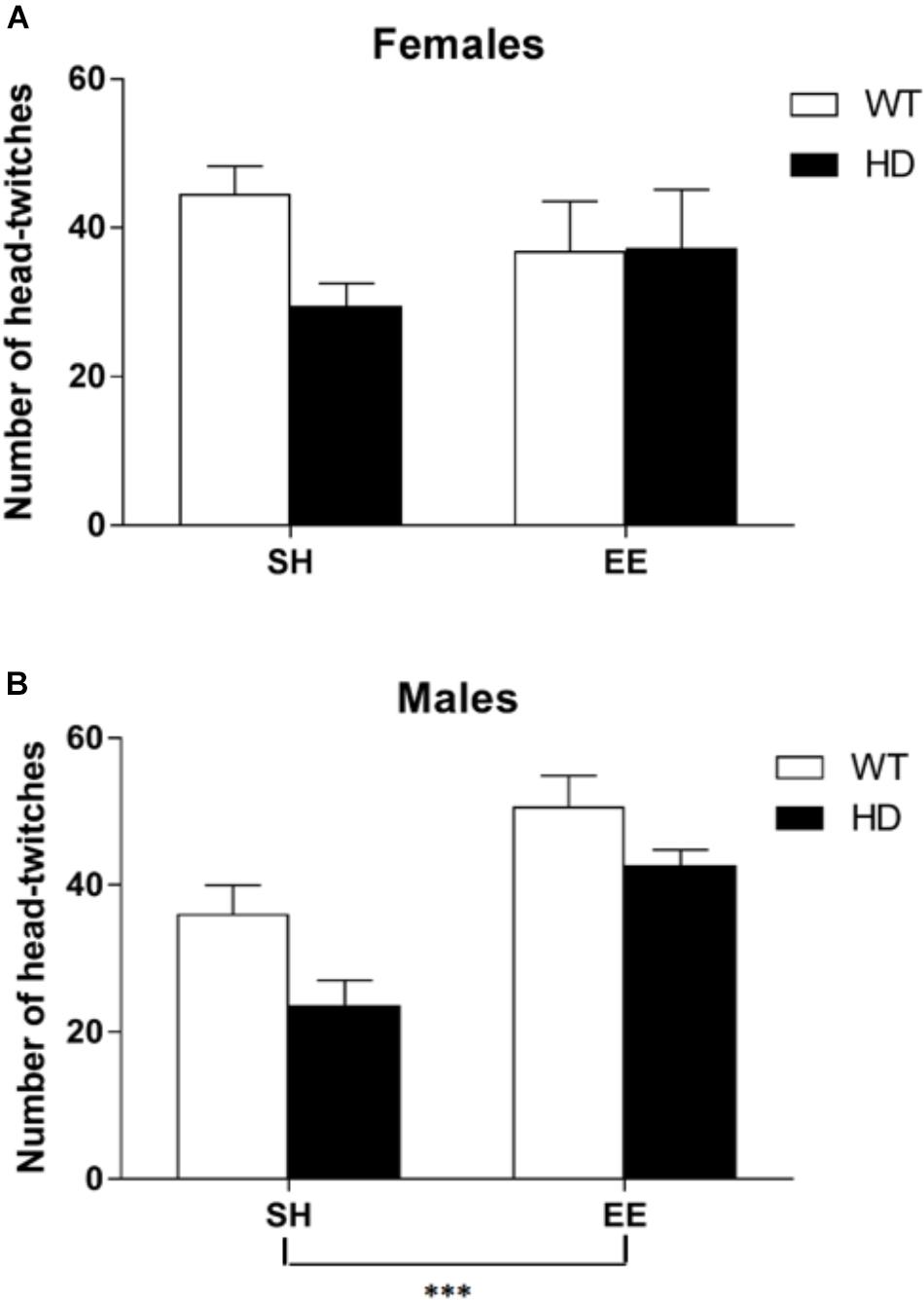 In this study, we have discovered various significant effects on gene expression due to genotype, environment, sex and brain region. This provides new insight into the pathogenesis of HD, and the therapeutic impacts of EE and exercise on the cognitive, psychiatric and motor symptoms of this currently incurable disease. Furthermore, the sexually dimorphic and region-specific effects we discovered may provide new insight into depression in HD (where sexual dimorphism occurs) and identify brain regions and molecular pathways that can be targeted with future therapeutic approaches.

The most intriguing change in gene expression after exposure to voluntary wheel running was an increase in SerT mRNA levels in the hippocampus in all four groups. An increase in serotonin transporter levels could indicate an increased ability to reuptake and recycle serotonin from the synaptic cleft in the hippocampus. SerT mRNA levels are reduced in the rat raphe nuclei after 3 weeks of running (Greenwood et al., 2005) and in a future experiment it would be interesting to investigate whether this is the case in HD mice.

There were significant decreases in Htr1a mRNA levels in 8-week-old male and female R6/1 HD mice in the hippocampus, cortex and striatum. Similar reduction in the hippocampus and cortex of 12-week-old male and female R6/1 HD mice have been demonstrated previously (Pang et al., 2009). This suggests that the transcriptional down-regulation of Htr1a occurs early in pathogenesis, prior to onset of behavioral deficits. Furthermore, our prior evidence of abnormal signaling through 5-HT1a autoreceptors in the raphe (Renoir et al., 2013) are consistent with transcriptional dysregulation of the Htr1a gene, and associated functional consequences.

The current study illustrates that EE and voluntary wheel-running paradigms do not have the same effect on gene expression patterns, far from it. In particular, Htr1b expression in the hippocampus and cortex of male WT mice is decreased by voluntary wheel running but increased by EE. In the cortex the same effect is apparent in the male R6/1 HD mice with a significant decrease in Htr1b mRNA levels due to voluntary wheel running and a significant increase caused by exposure to EE.

Previous findings from our laboratory showed that female, but not male, R6/1 HD mice exhibited a depressive-like phenotype at 8–12 weeks of age (Pang et al., 2009; Renoir et al., 2011). In the present study, while Htr2c expression levels in 8-week-old female HD mice did not differ from those seen in WT in any of the regions examined, male HD mice had significantly increased Htr2c expression in the striatum. This specific increase in males may reflect a potential compensatory mechanism. With respect to potential mechanisms mediating this sexual dimorphism, sex hormones are the most obvious candidate. We have previously demonstrated abnormalities of the hypothalamic-pituitary-gonadal (HPG) axis in these HD mice (Du et al., 2015), and this may contribute to our observed findings.

Levels of Htr2a mRNA in 8-week-old male HD mice exposed to 2 weeks of EE were comparable to, or exceeded, levels in WT male SH mice, showing a rescue of the deficit caused by the HD transgene. These results differ from those in 12-week-old HD mice showing no change in Htr2a expression 4 weeks of EE (Pang et al., 2009). This agrees with the hypothesis that the time period of the EE paradigm is critical with regard to cellular responses associated with transcriptional regulation. This hypothesis is also relevant to exercise interventions and could also explain the difference between the present study and our previous study in which a wheel-running intervention occurred between 8 and 12 weeks of age (Renoir et al., 2012). Changes in gene expression in response to a novel environment are likely to be transient, with gene expression returning after a period of time to steady-state levels even if the environmental changes persist. Transient changes in the effects of EE are biologically relevant as they could affect long-lasting structural changes within cells.

We therefore used a test of 5-HT2A/2C receptor function to assess whether EE-mediated change in Htr2a receptor expression was translated into a functional increase in receptor activity. The study showed that exposure to 2 weeks of EE increased the number of head-twitches seen after an injection of the 5-HT2 receptor agonist, DOI, in both HD and WT male mice, suggesting that EE does indeed increase the functional activity of 5-HT2A receptors in the mouse brain.

One limitation of the present study is that our gene expression measures were performed only at the mRNA level. It will be of interest in future studies to assess the impacts of these environmental interventions, as well as the associated effects of genotype, sex and brain region, at the protein level, using complementary approaches such as Western analysis and radioligand autoradiography, which would also provide more spatial resolution.

In this study, we have demonstrated a functional effect of early EE on behavioral pharmacology in WT mice, as well as a mouse model of a neurodegenerative disease. Our results provide new insight into the underlying mechanisms mediating the beneficial effects of EE, and will inform the development of this approach, and associated molecular targets, for future therapeutic interventions.

This work was supported by an NHMRC Project Grant and ARC FT3 Future Fellowship to AH. TR is an NHMRC Dementia Fellow. AH is an NHMRC Principal Research Fellow.

Copyright © 2018 Zajac, Renoir, Perreau, Li, Adams, van den Buuse and Hannan. This is an open-access article distributed under the terms of the Creative Commons Attribution License (CC BY). The use, distribution or reproduction in other forums is permitted, provided the original author(s) and the copyright owner(s) are credited and that the original publication in this journal is cited, in accordance with accepted academic practice. No use, distribution or reproduction is permitted which does not comply with these terms.