Cerebral autoregulation has a lower limit (Paulson et al., 1990) and following induction of anesthesia blood pressure may decrease to what is considered to be below that level. Accordingly, patients receive intravenous administration of vasopressor agents such as phenylephrine (an α-adrenergic receptor agonist) or ephedrine that stimulates both α- and β-adrenergic receptors. Bolus calcium chloride could also increase blood pressure (Ellender and Skinner, 2008) by an increase in intracellular calcium to increase cardiac stroke volume via an effect on myocytes and vascular resistance via increased contraction of smooth muscles. Also calcium chloride may increase venous return by unloading the splanchnic reservoir. Thus, with administration of calcium chloride cardiac output (CO) increases without affecting heart rate (HR) (Ellender and Skinner, 2008) contrasting ephedrine that has the potential to increase both HR and CO.

Phenylephrine decreases the near infrared spectroscopy (NIRS) determined frontal lobe oxygenation (rScO2) (Brassard et al., 2010, 2014; Nissen et al., 2010; Meng et al., 2011; Foss et al., 2014) related to vasoconstriction in extracranial vasculature rather than to a decrease in cerebral oxygenation (Ogoh et al., 2011, 2014; Sørensen et al., 2012). In this study patients undergoing major abdominal surgery were recruited to evaluate rScO2 following routine administration of vasoactive drugs to treat a drop in blood pressure by induction of anesthesia. We used bolus calcium chloride along with the vasopressor agents phenylephrine, ephedrine, adrenaline or noradrenaline depending on the choice of the anesthesiologist. We tested the hypothesis that administration of ephedrine, adrenaline and calcium chloride to treat anesthesia-induced hypotension would preserve rScO2, while rScO2 would be reduced following administration of drugs that stimulate α-adrenergic receptors (phenylephrine and noradrenaline).

In a pilot-like prospective study-design as approved by the regional ethical committee (H-1-2009-107) we included predominantly patients planned for major abdominal surgery. In 47 patients (age 63 ± 7 yrs, height 176 ± 7 cm, weight 78 ± 16 kg; 28 males; mean ± SD) this selection of cases tested the effect of different vasopressor agents on anesthesia-induced hypotension and rScO2. Most patients were admitted for planned surgery including the liver, pancreas, esophagus, ventricle, or colon. In one case the spleen was the target for surgery and an other patient suffered from a retroperitoneal tumor. Three patients underwent vascular surgery and one patient was in surgery for hydronephrosis. Diabetes requiring insulin and the use of anti-hypertensive medication were considered to contradict inclusion in the evaluated series of patients. An increase in bilirubin was also an exclusion criterion due to the influence of bilirubin on near-infrared light absorption (Madsen et al., 2000).

The patients were exposed to at least 6 h of fast and orally intake of clear fluids was stopped 2 h before surgery. Three-lead electrocardiography monitored HR and pulse oximetry assessed arterial hemoglobin O2 saturation (SpO2). A hand vein was used for administration of fluid and anesthetics. According to local guidelines, a radial artery catheter (20 gage; 1.1 mm) was, after local anesthesia, inserted in the arm with the highest non-invasively determined systolic blood pressure and the catheter was kept patent by isotonic saline (3 ml/h) through to a transducer (Edwards Life Sciences, Irving, CA, USA) positioned at the level of the heart. For surgery an epidural catheter was placed at Th. 8–10 in the lateral decubitus position and under local anesthesia, lidocaine (3 ml, 10 mg/ml) with adrenaline (5 μg/ml) was administered to test for intravascular or intrathecal placement.

A two channel cerebral oximeter (INVOS 5100C, Somanetics, Troy, MI, USA) detected rScO2 that represents hemoglobin oxygen saturation in the tissue beneath the sensor as the ratio between oxygenated and total hemoglobin. As approved by the US Food and Drug Administration (510k-080769), the INVOS 5100C-determined rScO2 is considered a trend monitor of the hemoglobin O2 saturation for skin, scalp, and cortical tissue. With the NIRS-probe applied on the forehead it is assumed that capillaries within the frontal lobe contribute to light absorbance (Madsen and Secher, 1999) but skin, subcutaneous tissue and the scalp blood flow also influences the INVOS-determined rScO2 (Davie and Grocott, 2012). rScO2 was determined at least 2 cm above the eyebrows to limit an influence from the frontal sinus on rScO2 (Tubbs et al., 2002). Cardiovascular variables including mean arterial pressure (MAP), HR, cardiac stroke volume (SV) and thus CO were assessed invasively by Model-flow® (Nexfin, B.V, Amsterdam, The Netherlands; Bogert and van Lieshout, 2005).

Anesthesia was induced with propofol (2 mg/kg) and maintained with propofol (0.08 mg/kg/min) and remifentanil (0.3–0.4 μg/kg/min). For ventilation a Dräger CATO (M32040, Lübeck, Germany) in volume-controlled mode was adjusted to an end-tidal CO2 tension of 4–4.5 kPa and a positive end-expiratory pressure of 5 cm H2O was used. When the patient was orally intubated, the inspiratory O2 fraction was set to 0.7 to preserve rScO2 (Rokamp et al., 2014). From induction of anesthesia, including tracheal intubation and until surgical incision, a reduction in MAP to below 60 mmHg was treated with administration calcium chloride (5 mmol) or α- and β adrenergic receptors: ephedrine (10 mg), phenylephrine (0.1–0.2 mg), adrenaline (1–2 μg), or noradrenaline (2–4 μg). No patient received more than one vasoactive agent.

It was estimated that to demonstrate a 10 ± 1.5% change in rScO2 (from 70% to 63%) as compared to the level before administration of the drug (alpha 0.05, power >90%) 17 patients was needed in each group. The goal was set to 20 patients to take drop-outs into account, but due to slow enrolment in study it was terminated. The study was conducted as open-label as the drug used depended on the choice of the anesthesiologist.

For comparison of values before and after drug administration a paired t-test (two tailed) was used and for comparison between groups and a t-test for unpaired data. For evaluation of differences in age, height and weight between groups we used ANOVA with unpaired data and a Tukey-test for post-hoc analysis. Analysis was performed by statistical software (PRISM 6.0 for MacOS; GraphPad software, San Diego, CA, USA) and a P < 0.05 was considered statistically significant. 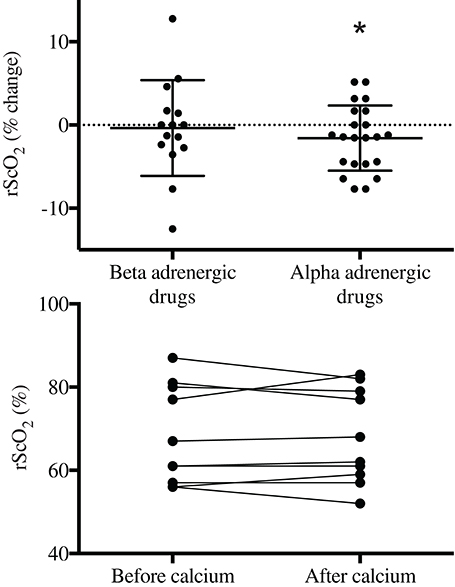 The effect of vasoactive therapy on the NIRS determined rScO2 are shown in Table 2 and Figure 1. In patients treated with adrenaline and ephedrine rScO2 was not affected significantly and when these data were pooled into one group of patients treated with β-adrenergic drugs, rScO2 remained statistical unaffected: there was an increase in rScO2 for five patients and for seven patients rScO2 decreased without relation to changes in MAP or CO. After noradrenaline and phenylephrine a small but non-significant reduction in rScO2 was noted for each vasoactive agent. However, with data evaluated as one group (α-adrenergic receptor agonists; noradrenaline and phenylephrine), seven patients with noradrenaline and seven patients with phenylephrine demonstrated lowered rScO2 after drug administration while for only six patients rScO2 increased (Figure 2). For two of these patients rScO2 decreased almost 10% while CO increased (0.5 and 2.3 L/min) and for the whole group of patients (α-adrenergic receptor agonists) rScO2 decreased 2%. After calcium chloride in four patients rScO2 decreased (1–5%) and while rScO2 was unchanged (n = 2) or increased (up to 6%) in the other eight patients, rScO2 was not statistical affected by calcium chloride. Correlations between rScO2 and MAP or CO were not observed. 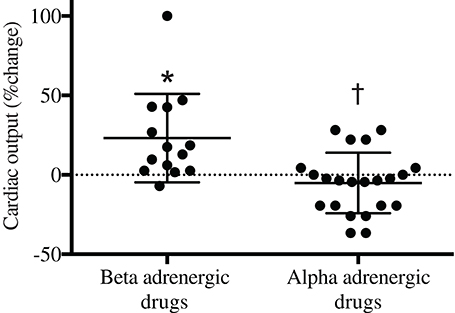 This case series of 47 patients confirms that following anesthesia-induced hypotension in elective surgical patients, a vasopressor agent including calcium chloride increases MAP. The new finding is that frontal lobe oxygenation (rScO2), as determined by near-infrared spectroscopy was not significantly affected following the use of calcium chloride for treatment of anesthesia-induced hypotension. A similar finding was observed with the use of ephedrine, phenylephrine, adrenaline, and noradrenaline as rScO2 remained at levels similar to those established before drug administration. However, when data from patients treated with α-adrenergic receptor agonists (phenylephrine and noradrenaline) were pooled into one group and patients treated with β-adrenergic drugs (adrenaline or ephedrine) were sampled in an other group, rScO2 decreased 2% after α-adrenergic drug administration but remained unaffected with administration of β-adrenergic stimulating drugs. This observation supports results obtained in patients (Nissen et al., 2010; Meng et al., 2011; Brassard et al., 2014) and healthy awake subjects (Brassard et al., 2010). Although a 2% reduction in rScO2 seems small, the change is in the magnitude as induced by hyperventilation that lowers arterial CO2 partial pressure with development of presyncopal symptoms (Madsen and Secher, 1999). Also Thomas et al. (2009) report ~6% drop in cerebral oxygenation at presyncope.

Why rScO2 is reduced after α-adrenergic drugs and not after administration of β-adrenergic-therapy and calcium chloride remains unclear. In patients with intact cerebral autoregulation, the decrease in rScO2 after phenylephrine and noradrenalin administration is associated with concordant reduction in CO, whereas rScO2 remains unchanged when CO was maintained with ephedrine (Meng et al., 2011). This observation supports that changes in CO, independently of arterial pressure, affect cerebral hemodynamics (Ogoh et al., 2005). Cerebral arteries are abundantly innervated by sympathetic fibers (Sandor, 1999) and the decrease in rScO2 after administration of α-adrenergic drugs could be by direct α-receptor-mediated cerebral vasoconstriction. An influence of cutaneous vasoconstriction beneath the NIRS optode, however has to be considered (Davie and Grocott, 2012; Sørensen et al., 2012).

Despite the effect of vasoactive agents on MAP was similar with the use of different drugs, the rise in pressure was achieved differently. Both ephedrine and adrenaline increased CO but such an effect was absent after administration of phenylephrine or noradrenaline. When data from patients treated with noradrenaline and phenylephrine were pooled into one group, CO was reduced in several patients (Figure 2): the eight lowest points with a decrease in CO by up to app. 50% represent four patients treated with phenylephrine and four patients treated with noradrenaline. After calcium chloride CO was unchanged and there was a trend towards a reduced HR (P = 0.16). For most of the patients treated with β-adrenergic agonists, CO increases by unloading of the splanchnic reservoir (Cannesson et al., 2012). An increase in CO may be important to override potential vasoconstriction in cutaneous and subcutaneous vessels following the use of vasoactive therapy. Considering that microvascular circulation influences wound healing, we consider that vasoactive drugs with significant vasoconstrictive capacity should be avoided both during and after surgery.

The use of calcium chloride to restore MAP is safe and in terms of the effect on rScO2 this study is unable to promote one vasoactive drug over an other. The data do suggest that the use of a vasopressor agent with combined α- and β-adrenergic agonistic capacity appears to be favorable to restore MAP following anesthesia-induced hypotension. Results from a randomized double-blinded clinical trial are needed before a general recommendation to use combined α- and β-adrenergic drugs or calcium chloride for treatment of anesthesia-induced hypotension is substantiated.

Henning Bay Nielsen was funded by Rigshospitalet Research fund and the Danish Agency for Science Technology and Innovation (271-08-0857).

Copyright © 2014 Kitchen, Nissen, Secher and Nielsen. This is an open-access article distributed under the terms of the Creative Commons Attribution License (CC BY). The use, distribution or reproduction in other forums is permitted, provided the original author(s) or licensor are credited and that the original publication in this journal is cited, in accordance with accepted academic practice. No use, distribution or reproduction is permitted which does not comply with these terms.

Cerebral oxygenation in health and disease