Methods: Forty five healthy men were enrolled in present study. Demographic and clinical data, physiological and hematological parameters were collected 3 days before the ascent and after acute exposure at 3,700 m.

Conclusion: The present study is the first to examine the hematological characteristics of HAH. Furthermore, lower RET# at sea level and lower NEU% at 3,700 m is a novel independent predictor and risk factor for HAH, respectively.

Headache is the fundamental symptom for a diagnosis of acute mountain sickness (AMS) according to the Lake Louise Scoring System (Imray et al., 2010; Bartsch and Swenson, 2013; Davis and Hackett, 2017). In this context, high-altitude headache (HAH) is a defined and recognized headache disorder, which occurs within 24 h after ascending to an altitude of >2,500 m, based on the International Classification of Headache Disorders 3β criteria (Marmura and Hernandez, 2015; Kim et al., 2016). Approximately 80% of people are thought to experience headache after rapidly ascending to high altitudes, which is associated with disturbances in their daily life and work that create an important public health problem (Carod-Artal, 2014).

The present study was based on the hypothesis that hematological parameters would be closely related to HAH. Therefore, we evaluated the hematological characteristics of participants before and after exposure to high altitude, which may provide useful information regarding HAH-specific hematological phenotypes, independent risk factors, and predictors.

The inclusion criteria were healthy 18–60-year-old Chinese men whose primary residence was at an altitude of ≤1,000 m. The exclusion criteria were cardio-cerebrovascular diseases, respiratory diseases, neuropsychological diseases, kidney disorders, liver disorders, migraine or other headaches, history of travel to an altitude of >2,500 m during the last 2 years, and regularly drinking coffee or tea. Based on these criteria, we successfully recruited and enrolled 45 Chinese men who were healthy and 18–35 years old. The study's protocol was approved by the Third Military Medical University Ethics Committee (China), and complied with the requirements of the Declaration of Helsinki. All participants signed informed consent forms before their enrollment.

During the study, all participants rapidly ascended from Chongqing (sea level, altitude of 200 m) to Lhasa (altitude of 3,700 m) by train within 48 h. Three days before the ascent, the participants provided demographic data and underwent measurements of physiological and hematological parameters at sea level. Within 24 h after their arrival at 3,700 m, the participants underwent assessments of their physiological and hematological parameters, as well as HAH. During the study, the participants maintained the same diet (no coffee, tea, or alcoholic drinks) and avoided strenuous activity to ensure a similar level of physical activity. The participants were monitored by physicians for any signs of high-altitude cerebral or pulmonary edema (Hackett and Roach, 2004; Pennardt, 2013). The possibility of emergent cases of these conditions was addressed by planning for immediate evacuation and treatment using oxygen supplementation and medication.

Three days before their ascent, the participants completed self-administered questionnaires to obtain their demographic data (body mass index [BMI], age, smoking history, and drinking history). After the acute exposure at 3,700 m, the physicians scored the participants based on the clinical features of HAH: headache (0 = none, 1 = mild, 2 = moderate, 3 = severe), the location of the headache (bilateral, frontal, frontal-temporal, or other), and factors that worsened the headache (exertion, movement, straining, coughing, or other). The diagnosis of HAH was based on fulfilling at least two of the International Classification of Headache Disorders 3β criteria (Marmura and Hernandez, 2015): mild or moderate severity; bilateral location; and aggravation caused by exertion, movement, straining, coughing, and/or bending.

The parameters' normality was assessed using the Shapiro-Wilk's test. Normally distributed data were presented as mean ± standard deviation, non-normally distributed data were presented as median (interquartile range), and categorical data were presented as number (percentage). Differences between the groups with and without HAH (HAH+/HAH−) were compared using the independent t-test for normally distributed data and the Mann-Whitney U-test for non-normally distributed data. Spearman correlation coefficients were evaluated for the relationships between the parameters and HAH severity scores. Univariate logistic regression was used to identify risk factors and predictors, and significant factors from the aforementioned analyses were included in adjusted logistic regression (Figure 1). All analyses were performed using IBM SPSS software (version 19; IBM Corp, Armonk, NY, USA), and differences were considered statistically significant at a P-value of < 0.05. All statistical methods and results were discussed with and guided by statisticians from the Third Military Medical University. 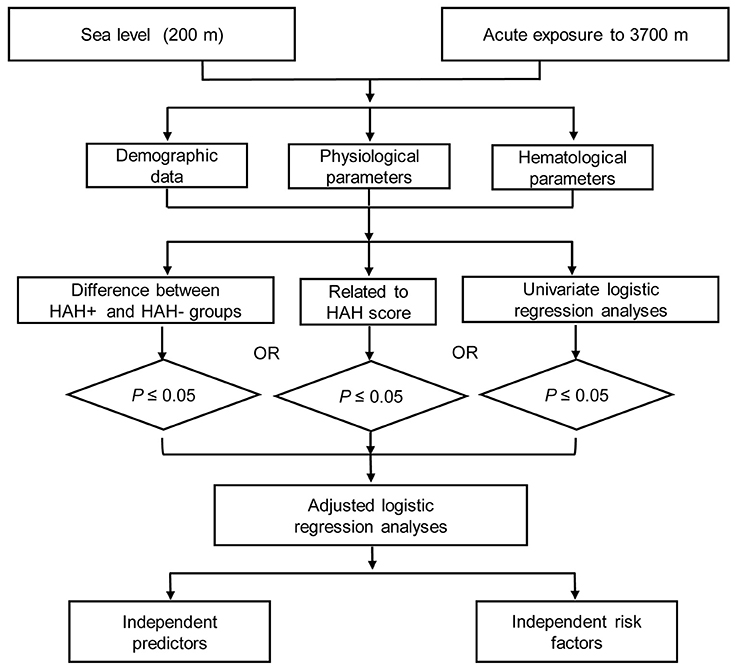 All 45 participants completed the pre-exposure and post-exposure assessments, and had complete data regarding their physiological and hematological parameters. The incidence of HAH was 51.1%, although no significant differences were observed between the HAH+ and HAH− groups for age, BMI, drinking, and smoking (all P > 0.05, Table 1). 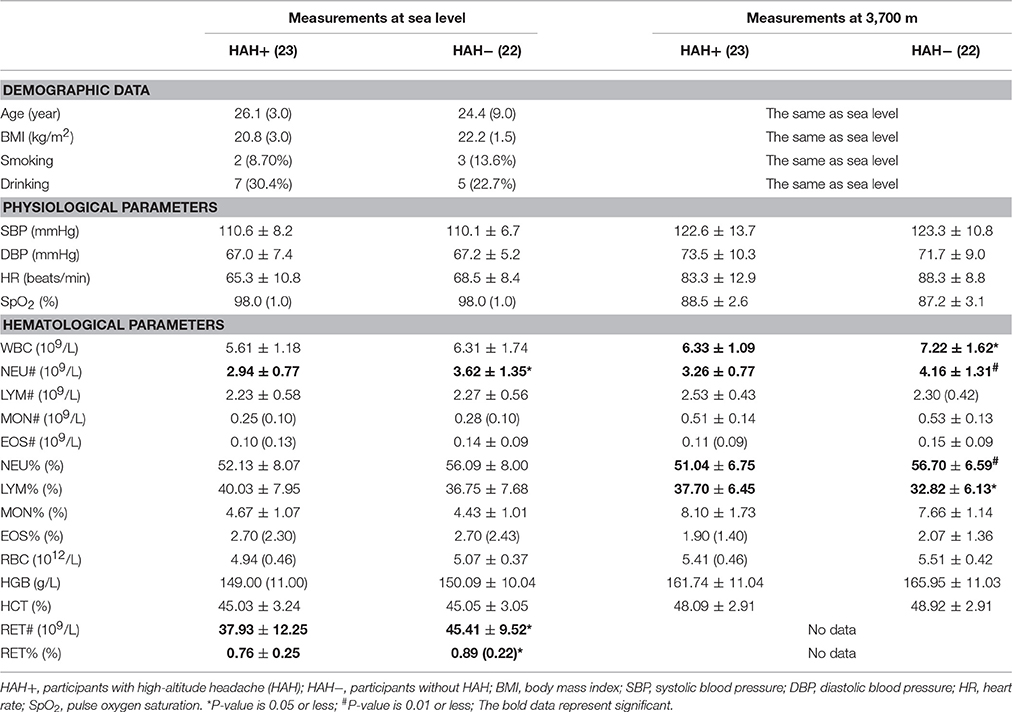 Table 1. Differences of each variable between HAH+ and HAH− groups.

Associations between HAH Severity and the Pre-/Post-exposure Parameters 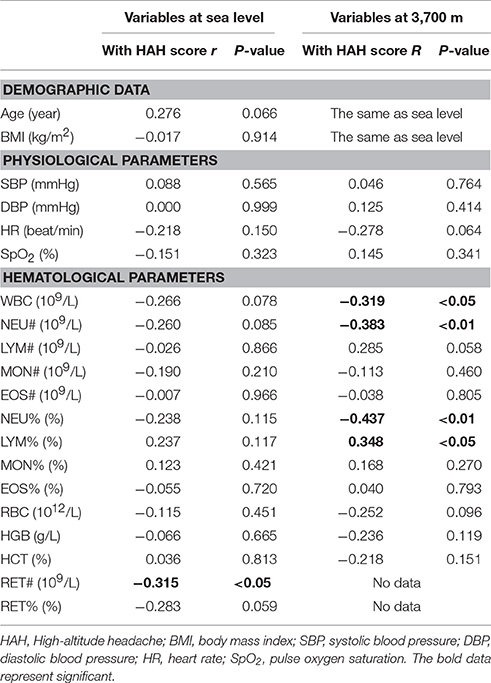 Table 2. Relationships between HAH severity score and all the variables.

Predictors and Risk Factors for HAH 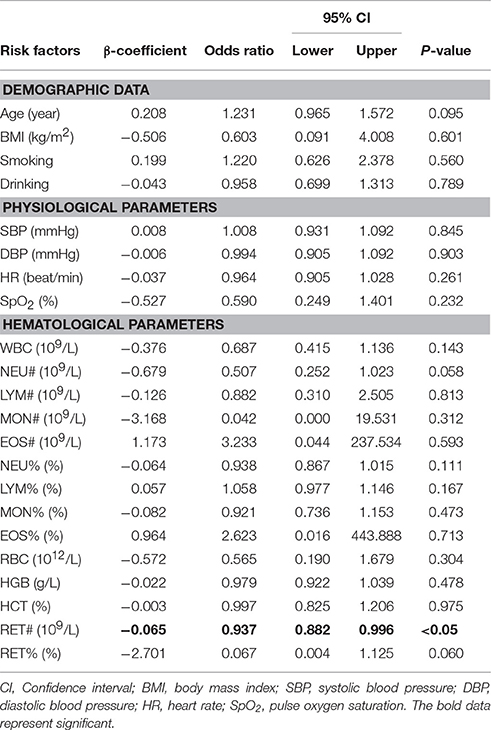 Table 3. Univariate logistic regression for each variable at sea level. 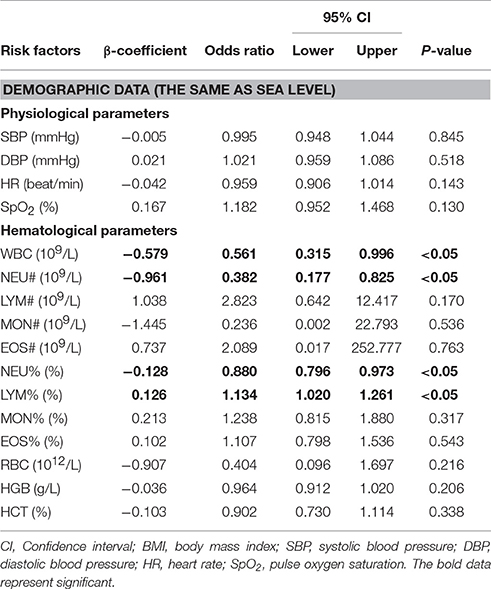 Table 4. Univariate logistic regression for each variable at 3,700 m.

HAH is Associated with Reticulocyte and Neutrophil Counts at Sea Level

The present study revealed that low pre-exposure RET# was associated with the development of HAH at an altitude of 3,700 m. Furthermore, the severity of HAH was negatively associated with RET#. In this context, reticulocytes are immature RBCs and circulate in the bloodstream for approximately 1–4 days before developing into young mature RBCs (Lombardi et al., 2013). Interestingly, hypoxia stress can stimulate the production of reticulocytes (MacNutt et al., 2013), and young mature RBCs have greater affinity for oxygen plus more efficient oxygen delivery to the tissues, compared to old RBCs (Samaja et al., 1991; Cohen and Matot, 2013). Moreover, a recent open-label randomized controlled trial revealed that erythropoietin (which stimulates hematopoiesis) is an effective prophylaxis for AMS (Heo et al., 2014). Therefore, our results may support the prevention of HAH using prophylactic induction of hematopoiesis in case with anticipated acute exposure to a hypoxic environment.

Our results also indicate that the HAH+ group had significantly lower pre-exposure NEU#, compared to the HAH− group. Previous studies have demonstrated that neutrophils undergo cellular adhesion and trans-endothelial migration from the blood stream during inflammation (Hall, 2015). In addition, hypobaric hypoxia could readily amplify pre-existing inflammation, which might lead to cerebral edema and AMS (Eltzschig and Carmeliet, 2011; Song et al., 2016). Furthermore, a recent study demonstrated that inflammation at sea level could predict the development of AMS (Lu et al., 2016). Thus, our results may indicate that inflammation at sea level is a risk factor for HAH.

The first potential explanation is that neutrophils undergo trans-endothelial migration from the blood stream during inflammation, which is related to the similar mechanisms underlying stroke and AMS (Jin et al., 2010; Julian et al., 2011; Hall, 2015). Moreover, neutrophils are among the first cells to infiltrate the ischemic brain (within 30 min to a few hours after developing focal cerebral ischemia), where they amplify the inflammatory response with the help of cytokines (e.g., interleukin-1β [IL-1β], IL-6, and tumor necrosis factor-α [TNF-α]) that are produced by activated microglial cells (Ziemka-Nalecz et al., 2017). Intriguingly, our previous study revealed that plasma levels of IL-1β, IL-6, and TNF-α were positively correlated with AMS severity at 3,700 m, and another recent study revealed that plasma IL-6 levels were positively associated with AMS severity at 4,450 m and 5,129 m (Boos et al., 2016; Song et al., 2016). Thus, we speculate that hypobaric hypoxia induces brain injury by recruiting circulating neutrophils that aggravate neurogenic inflammation and lead to the development of HAH.

The second potential explanation is that neutrophil recruitment may be due to dampened anti-inflammatory IL-10 and upregulated C-C Motif Chemokine Ligand 8 (CCL8). For example, our recent transcriptome analysis revealed that IL-10 is downregulated in AMS, whereas CCL8 is upregulated (Liu et al., 2017). In addition, IL-10 is a general suppressor of the inflammatory response, while CCL8 promotes neutrophil recruitment (O'Boyle et al., 2007; Ouyang et al., 2011). Thus, we speculate that the lower NEU# and NEU% in patients with HAH are associated with the reduction of IL-10 and upregulation of CCL8, and this topic warrants urgent investigation. The third potential explanation is that the relatively high LYM% in patients with HAH could be the result of lower NEU%, as patients with and without HAH had similar values for LYM#.

The adjusted logistic regression analyses revealed that low post-exposure NEU% was a risk factor for HAH. This may be because of the inflammatory response that is induced during HAH development. In addition, HAH was independently predicted by low RET#. This may reflect an impaired ability to produce young mature RBCs, which would decrease oxygen delivery to the tissues at high altitudes.

Ours is the first study to examine the hematological characteristics of HAH, and provides the first step toward linking the fields of hematology and HAH. However, the study also has several limitations. First, we only examined a small cohort of young Chinese men, which could have introduced age- or sex-related bias. Second, we did not have access to post-exposure reticulocyte data. Thus, our findings should be validated using larger and more heterogeneous cohorts, as well as more complete experimental data.

The present study is the first to examine the hematological characteristics of HAH, and revealed that HAH was closely associated with WBC, NEU#, NEU%, LYM%, RET#, and RET%. In addition, HAH was independently predicted by low pre-exposure RET#, and low post-exposure NEU% was an independent risk factor for HAH.

This work was supported by the Key Projects in the Military Science & Technology Pillar Program during the 13 5-year Plan Period (AWS14C007), by the Key Research Project of PLA (BWS11J042, AWS16J023).

The Supplementary Material for this article can be found online at: https://www.frontiersin.org/articles/10.3389/fphys.2017.00801/full#supplementary-material

Copyright © 2017 Huang, Liu, Wu, Xu, Sun and Gao. This is an open-access article distributed under the terms of the Creative Commons Attribution License (CC BY). The use, distribution or reproduction in other forums is permitted, provided the original author(s) or licensor are credited and that the original publication in this journal is cited, in accordance with accepted academic practice. No use, distribution or reproduction is permitted which does not comply with these terms.

Physiological and Pathological Responses to Hypoxia and High Altitude