It is known that endoplasmic reticulum (ER) and nucleus communicate with each other to cope with ER stress. However, the mechanisms through which extracellular transmission of ER stress occurs remain unexplored. When the ER stress-induced unfolded protein response (UPR) is activated, the X-box binding protein 1 (XBP1) mRNA is spliced by inositol-requiring enzyme-1α (IRE1α) to produce the spliced form of XBP1 (sXBP1). In the present study, we found that sXBP1 mRNA in the cell may be incorporated into the exosomes and was released extracellularly. We found that the ratio of the mRNA levels of sXBP1 to unspliced XBP1 (uXBP1) in the exosome was higher than that of cells in MIN6 mouse pancreatic β cells. A similar effect was observed when XBP1 splicing was induced by overexpressing IRE1α in HEK293T cells. These results suggest that the incorporation of sXBP1 into the exosomes is a novel mechanism of UPR transmitted to extracellularly, which would be triggered when cells are exposed to stress.

Mounting evidence has shown that the ER and nucleus communicate with each other to cope with ER stress (Hetz, 2012). However, as far as we know, there is no previous evidence showing the extracellular transmission of ER stress through exosome. The exosomes are nanoscale vesicles (50–150 nm in diameter) that are secreted extracellularly. Increasing evidence suggests that the secreted exosomes play a role in cell–cell communication (Valadi et al., 2007; Schorey et al., 2015). In the present study, we hypothesized that the ER stress signals may be transduced and packed into the exosomes.

On the starting day (day 0), the HEK293T cells were plated onto 100-mm dishes. On day 1, the cultured cells were replenished with fresh medium (DMEM, 10% FCS) not containing antibiotics. Three hours later, the cells were transfected with IRE1α (FLAG-tagged human IRE1α) plasmid by using the calcium phosphate co-precipitation method. Sixteen hours after the transfection, the cells were replenished with fresh medium (DMEM), which included exosome-depleted FCS (5%) and antibiotics.

Western blotting was performed as described previously (Hosoi et al., 2014) albeit with some modifications. Briefly, the cells were washed and lysed for 20 min with RIPA buffer containing 25 mM Tris HCl (pH 7.6), 150 mM NaCl, 1% NP-40, 0.1% SDS, 1% sodium deoxycholate, 1 mM Na3VO4, 10 mM NaF, 10 μg/mL aprotinin, 10 μg/mL leupeptin, and 1 mM phenylmethylsulfonyl fluoride (PMSF). The lysates were incubated on ice for 20 min. Then, the samples were sonicated for 4 min and suspended for 30 min at 4°C. After additional sonication for 4 min, the samples were centrifuged at 14,000 rpm for 5 min at 4°C, and the supernatants were collected. The samples were then boiled in SDS sample buffer for 3 min, fractionated with SDS-PAGE, and transferred to nitrocellulose membranes. These membranes were then incubated with anti-CD63 (Novus; 1:1000), anti-calnexin (Enzo; 1:1000), anti-CD81 (Cell signaling; 1:1000), and anti-IRE1α (Cell signaling; 1:1000) antibodies, followed by an anti-horseradish peroxidase-linked antibody. Peroxidase binding was detected using chemiluminescence with an enhanced chemiluminescence system.

Exosomes were collected from the cell culture medium 24 h after replacement with fresh medium containing exosome depleted FCS. ExoQuick-TC was used to collect the exosomes from the culture supernatant by following the manufacturer’s instructions. The quality of the exosomes was checked by Western blotting with anti-CD63, anti-calnexin, and anti-CD81 antibodies.

Exosomes obtained were analyzed by scanning electron microscopy (SEM). The isolated samples were loaded on electron microscopy grid and then fixed with 2% glutaraldehyde and 2% paraformaldehyde for 1.5 h at room temperature. After washing with PBS, the samples were stained with 2% phosphotungstic acid solution (pH7) for 20 min at room temperature. Then, the samples were dehydrated with ethanol (50, 70, 80, 90, 95, 100%), incubated with tert-butyl alcohol, and dried using freeze dryer. After the dehydration, samples were coated with osmium tetroxide and analyzed with Field Emission Scanning Electron Microscope (JSM-7800F, JEOL Ltd.). 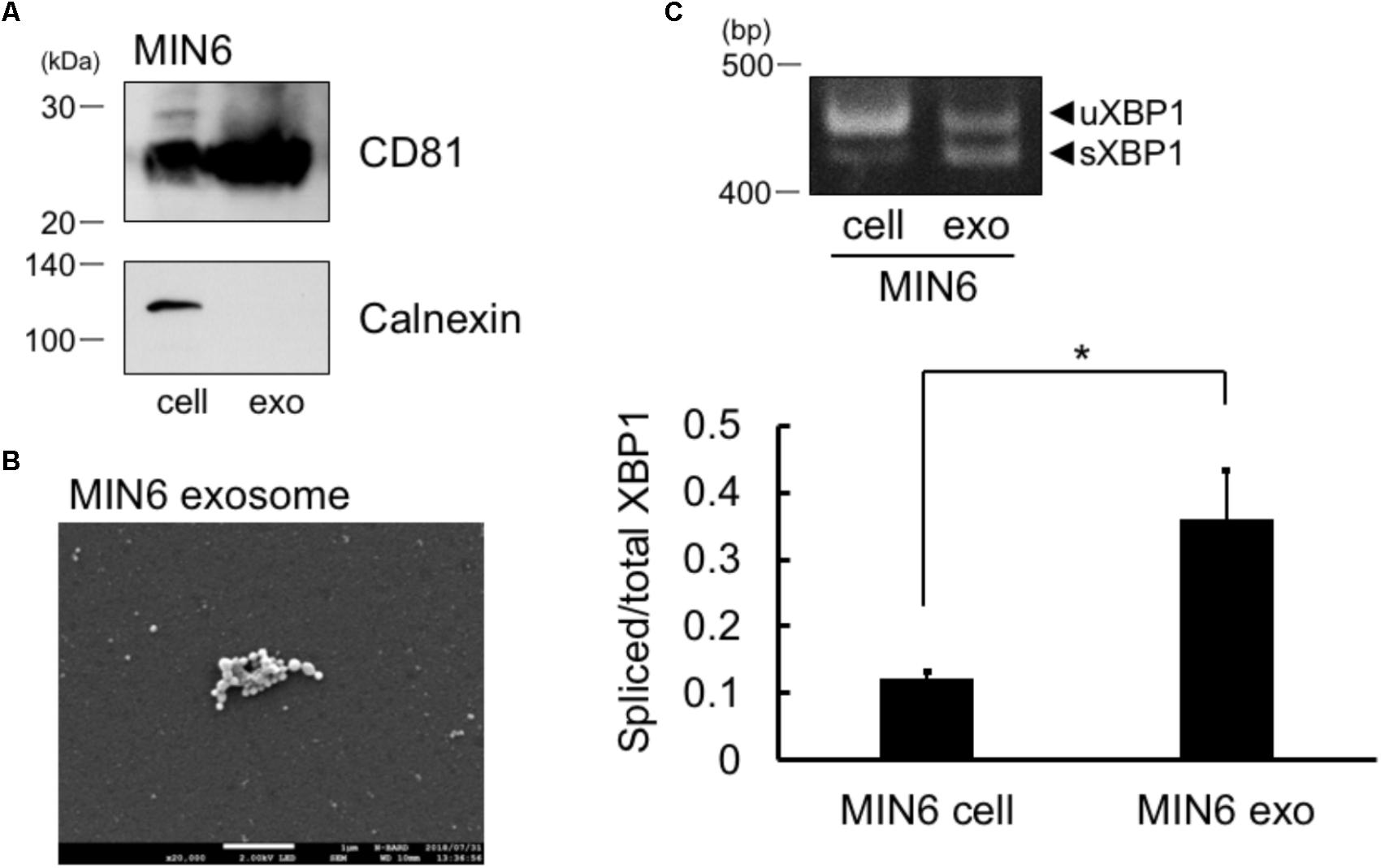 sXBP1 mRNA in Cells Was Incorporated Into the Exosomes

sXBP1 mRNA in the Cells Was Incorporated Into the Exosome of HEK293T Cell, Which Overexpress IRE1α 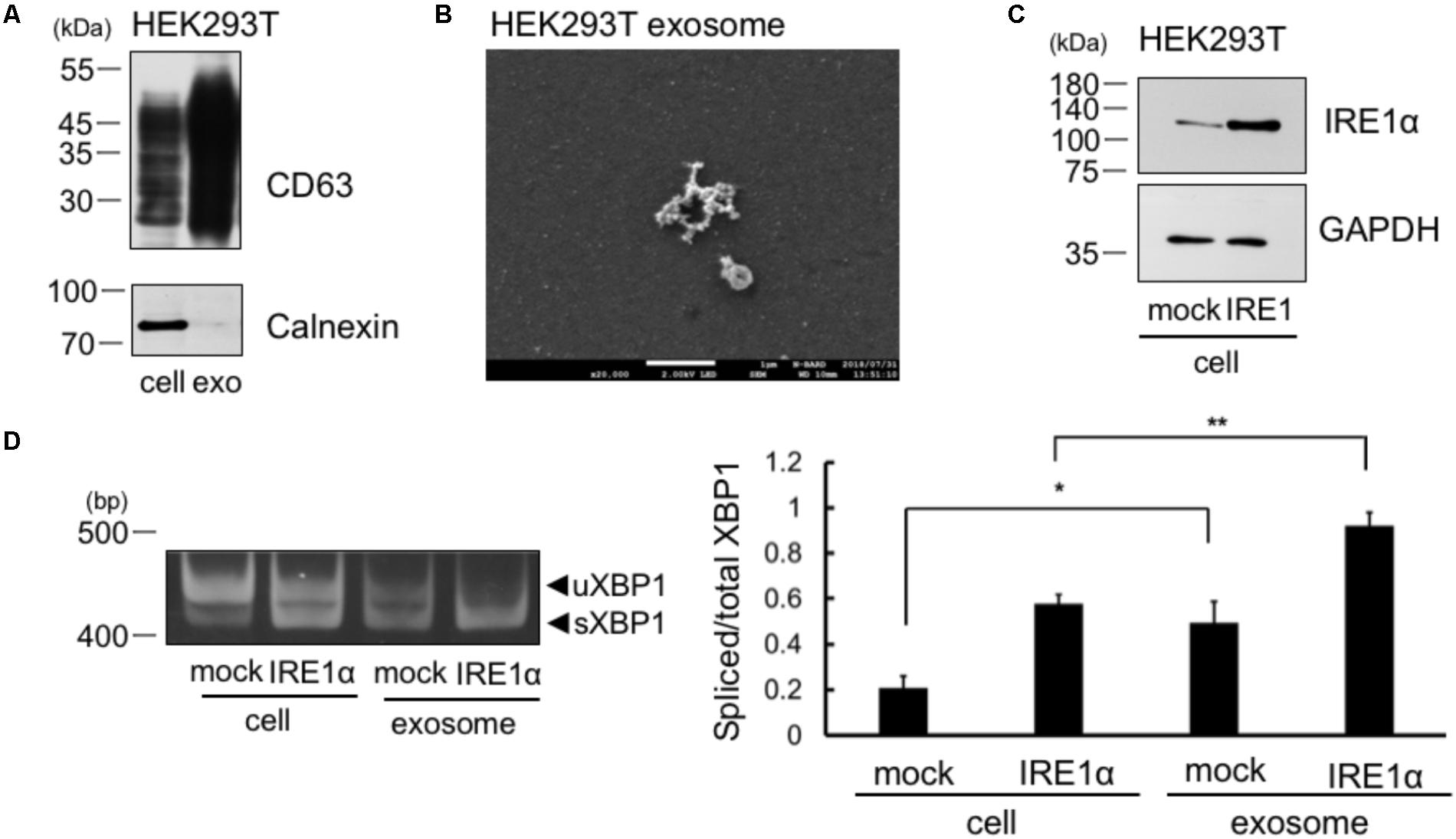 sXBP1 acts as a transcription factor, regulating cellular homeostasis by coping with stress (Yoshida et al., 2001). In the present study, we found that XBP1 and sXBP1 mRNAs were both expressed in the exosomes. We also found that the levels of spliced/total XBP1 mRNA in the exosomes were higher when compared with its levels inside the cells. To date, the mechanisms involved in the incorporation of sXBP1 mRNA into the exosomes remain unelucidated. It has been reported that the formation of multivesicular bodies (MVBs) increases by ER stress (Kanemoto et al., 2016). Because the production of MVBs and their fusion with the plasma membranes (PM) plays a key role in the release of exosomes (van Niel et al., 2006), incorporation of sXBP1 mRNA would likely occur during this process. Currently, we do not know the molecular mechanisms of the incorporation of sXBP1 mRNA in the exosomes, which would be interesting future subjects. IRE1α was suggested to play a role in releasing exosomes by ER stress (Kanemoto et al., 2016). Therefore, it would also be an interesting subject to analyze the molecular mechanisms how IRE1α-XBP1 pathway was involved in releasing exosomes as well as incorporating sXBP1 mRNA in the exosome.

sXBP1 transcripts are highly expressed in pancreatic cells (Iwawaki et al., 2004) (Figure 1). In addition, exosomes can cross the blood–brain barrier (Alvarez-Erviti et al., 2011; Chen et al., 2016), a fact that could be exploited in treating neurodegenerative diseases (Jarmalavièiūtë and Pivoriûnas, 2016). Epidemiological evidence suggests that type 2 diabetes is a risk factor in the development of AD (Leibson et al., 1997; Pasinetti and Eberstein, 2008), and pancreatic β cell function may be closely linked to AD onset. If pancreatic exosomes are absorbed by neurons, then they could be key to regulating neuronal function. sXBP1 was suggested to be involved in protecting amyloid β-induced neurotoxicity in Alzheimer’s disease (AD) models (Casas-Tinto et al., 2011). Therefore, it would be an interesting future topic to investigate possible involvement of sXBP1 in the exosome in AD progression.

This work protectwas supported by the JSPS KAKENHI and Takeda Science Foundation.

The Supplementary Material for this article can be found online at: https://www.frontiersin.org/articles/10.3389/fphys.2018.01357/full#supplementary-material

Copyright © 2018 Hosoi, Nakashima and Ozawa. This is an open-access article distributed under the terms of the Creative Commons Attribution License (CC BY). The use, distribution or reproduction in other forums is permitted, provided the original author(s) and the copyright owner(s) are credited and that the original publication in this journal is cited, in accordance with accepted academic practice. No use, distribution or reproduction is permitted which does not comply with these terms.