Prognostic Value of Nicotinamide N-Methyltransferase Expression in Patients With Solid Tumors: A Systematic Review and Meta-Analysis

Background: Nicotinamide N-methyltransferase (NNMT) is an enzyme that catalyzes N-methylation of pyridine-containing compounds. NNMT is upregulated in many types of solid tumors, suggesting the potential for its use as a tumor biomarker. However, the prognostic value of NNMT in solid tumors is still unclear. We therefore conducted a meta-analysis to investigate the association between NNMT expression and survival in patients with solid tumors.

Conclusion: High NNMT expression levels may be a poor prognostic biomarker for patients with solid tumors.

Cancer is one of the leading causes of morbidity and mortality worldwide. In 2012, approximately 8.2 million deaths occurred due to cancer (Torre et al., 2015). Global Health Observatory (GHO) data showed that cancer resulted in 8.8 million deaths in 2015. Genomic and epigenomic changes have been implicated as a critical factor in the oncogenic transformation of normal cells. Epigenetic modifications, including the methylation and acetylation of histones, as well as DNA methylation, have been shown to be involved in the development and progression of many types of cancer (Sui et al., 2015). Abnormal alterations in histone acetylation are associated with cancer development (for example, loss of acetylation at lysine 16) (Li and Seto, 2016). Abnormal methylation in promoter regions of genes have been found in cancers, dysregulating expressions of such genes (Herman and Baylin, 2003). Nicotinamide N-methyltransferase (NNMT) is essential for histone methylation, and its expression results in dysregulated transcription and translation of several key genes involved in the development of glioblastoma. NNMT is involved in reorganizing the methylome in glioblastoma cells, as NNMT inhibition upregulates the availability of methyl groups that leucine carboxyl methyl transferase 1 uses to methylate protein phosphatase 2A, further inhibiting serine/threonine kinases (Palanichamy et al., 2017). Elevated mRNA levels of NNMT have been identified in six major databases, including TCGA GBM, Rembrandt, TCGA GBMLGG, Phillips, Gravendeel, and Nutt. NNMT protein levels are higher in tissues taken from glioblastoma patients compared with those from patients with nonmalignant brain tumors (Jung et al., 2017). Moreover, NNMT dysregulation has been shown to be a contributing factor to the progression of gastric cancer, pancreatic cancer, prostate cancer, nasopharyngeal cancer, lung cancer, hepatocellular cancer, and renal cancer (Yao et al., 2005; Kim et al., 2009; Ujiie et al., 2012; Win et al., 2013; Bi et al., 2014; Zhou et al., 2014; Chen et al., 2016; Xu et al., 2016). Interestingly, high NNMT expression levels correlate with poor prognosis in patients with glioblastoma (Jung et al., 2017), gastric cancer (Chen et al., 2016), and pancreatic cancer (Xu et al., 2016). However, results obtained from these studies did not show a statistically significant correlation between NNMT levels and prognosis in patients with glioblastoma (Jung et al., 2017), pancreatic cancer (Bi et al., 2014), and lung cancer (Ujiie et al., 2012). Thus, the prognostic value of NNMT in solid tumors remains controversial.

This study was performed according to the Preferred Reporting Items for Systematic Reviews and Meta-Analyses (PRISMA) guidelines. It was registered in PROSPERO, and the registration number is CRD42018088951.

Electronic databases, including PubMed, Embase, and Web of Science were queried for studies (written in English) regarding NNMT expression levels and the survival of patients with solid tumors. The China National Knowledge Infrastructure, the Wanfang Data, and the Chinese Scientific Journals Database were searched for publications in Chinese. All databases were updated to June 7, 2018. NNMT or nicotinamide N-methyltransferase was used as search term. Other relevant studies were also retrieved from references of selected articles.

In accordance with Patient, Intervention, Comparison, Outcome and Study Design (PICOS) guidelines, we focused on patients with solid tumors. High NNMT expression levels and low NNMT expression levels were regarded as intervention and comparison, respectively. Clinical outcomes included overall survival (OS), disease-specific survival (DSS), and time to tumor progression (TTP). Studies involved in cohort study design were included. We collected all eligible articles evaluating the association between NNMT expression levels and clinic outcome. All included studies had to meet the following criteria: (1) they evaluated the prognosis of patients with solid tumors; (2) they provided a hazard ratio (HR) and 95% confidence interval (CI), or included sufficient information to estimate these parameters; and (3) a cut-off value was given to stratify the expression levels as “high” and “low.” Exclusion criteria were as follows: (1) letters, reviews, experimental studies, case reports, conference abstracts, and duplicated studies; (2) NNMT expression levels detected in cell lines; and (3) studies that did not provide enough data to calculate the HR and 95% CI.

We used the Newcastle-Ottawa Scale (NOS) (Wells et al., 2009) to assess study quality, which was previously adopted by Tian et al. and Zhou et al. (Tian et al., 2017; Zhou et al., 2018). Each study was judged on the basis of selection, comparability, and outcome assessment. The highest mark given was nine, and studies with an NOS score higher than six were viewed as high quality. Two authors (SL and LQ) separately evaluated the quality of these studies. Disagreements in study score were resolved through discussion. Where there was a disagreement on the assessment of study quality, the issue was resolved by discussion or consensus with the third investigator (ZY).

In this study, HR and 95% CI were applied to evaluate the association between NNMT expression levels and the outcomes of patients with solid tumors. Statistical heterogeneity was assessed using Q-tests and the I-squared test, and P < 0.10 or I2 > 50% was considered as statistically significant heterogeneity. If there was heterogeneity among included studies, a random effect model was used to pool the HR; otherwise, a fixed effect model was utilized. Publication bias was assessed by Begg's funnel plot and Egger's regression method. Stata Version 12.0 (Stata Corporation, College Station, TX, USA) was used to analyze the data extracted from the studies. All statistical tests were two-sided, and P < 0.05 was defined as statistically significant.

A total of 789 studies were initially identified by searching computerized databases. After screening titles and abstracts, we discarded 513 publications that were duplicated, and excluded 252 publications based on irrelevant subject matter. We reviewed 24 studies and found that 12 studies investigated the association between NNMT expression levels and prognosis in patients with solid tumors. However, three studies lacked sufficient data to calculate the HR and 95% CI. Finally, a total of 3,340 patients in nine studies including 14 cohorts were included (Figure 1). 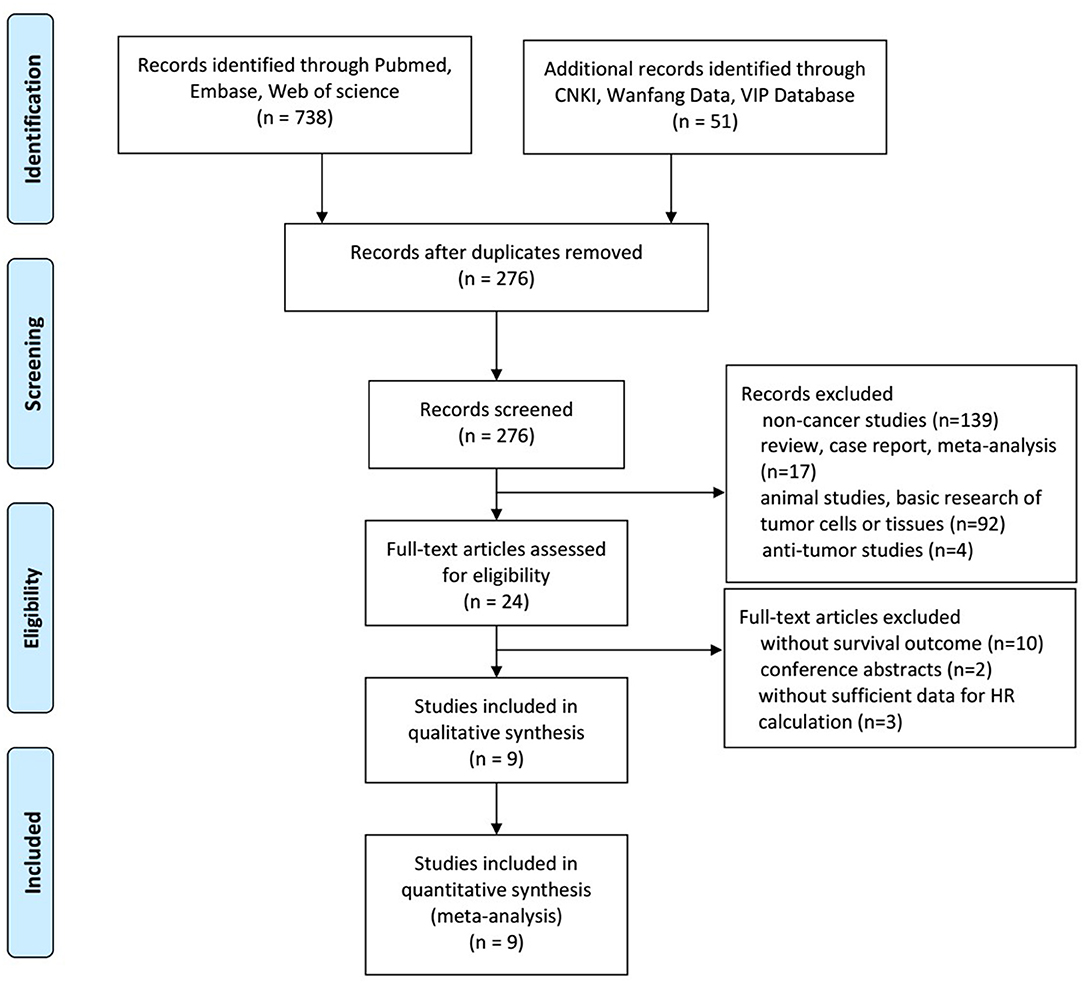 The eligible studies were published from 2005 to 2017, and their clinical characteristics are summarized in Table 1. The patients enrolled in these studies were from China, Japan, Korea, and USA. In our study, we investigated the association between NNMT expression levels and prognosis for solid tumors (glioblastoma, gastric cancer, pancreatic cancer, prostate cancer, nasopharyngeal cancer, lung cancer, hepatocellular cancer, and renal cancer). The cut-off values are listed in Table 2. 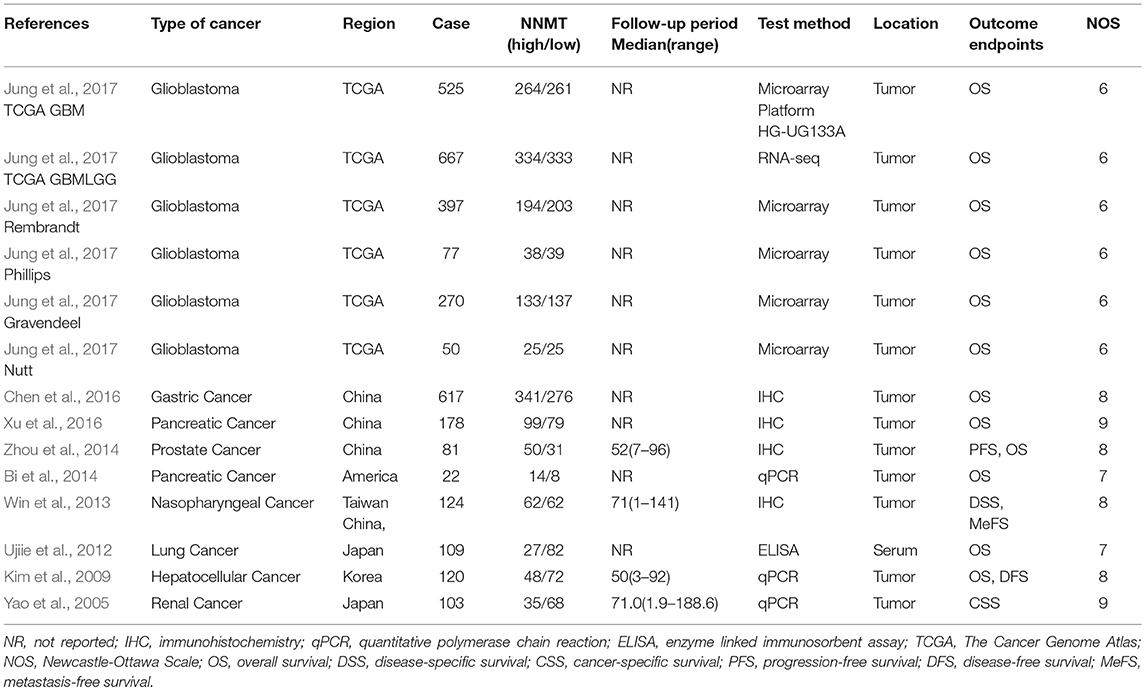 The Newcastle-Ottawa quality assessment scale was used to assess study quality. The included studies with scores ranging from 6 to 9 indicated that they had high methodological quality (Table 1).

As shown in Table 3, we conducted subgroup analyses (presence of glioblastoma, ethnicity, methods used to extract HR, test targets, and sample size) to explore the source of heterogeneity in our study. 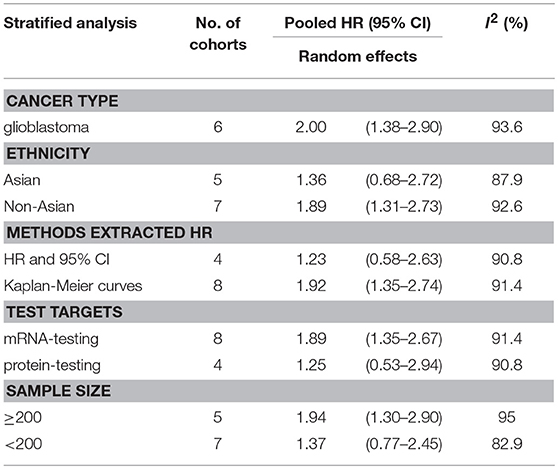 Table 3. Subgroup analyses of the association between nicotinamide N-methyltransferase upregulation and overall survival for patients with solid tumor. 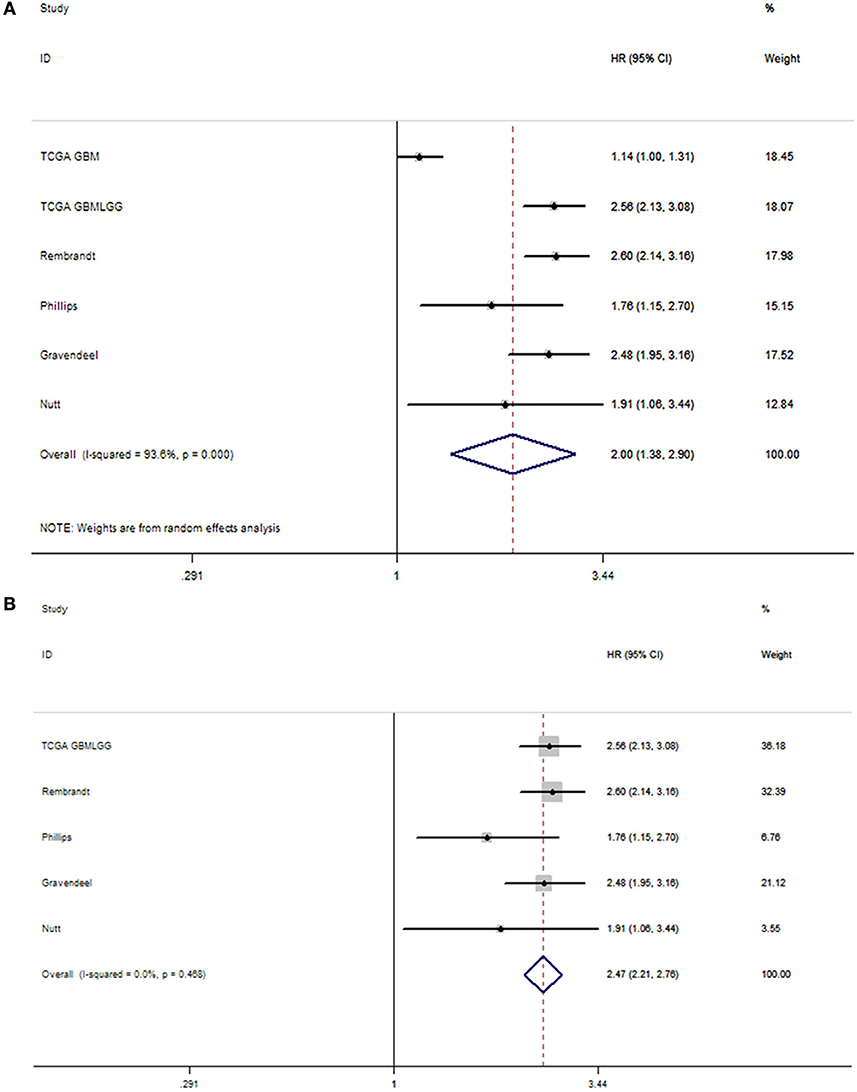 To perform sensitivity analysis, we eliminated one study at a time to test the robustness of our results. We conducted sensitivity analysis for OS in patients with solid tumors, the subgroup of patients with glioblastoma, and the mRNA-testing group. The pooled HRs were not significantly altered by excluding any single study that measured OS as an endpoint. However, the heterogeneity of pooled HR for OS was substantially reduced after removing the study conducted by Zhou et al. (2014) and the TCGA GBM dataset from Jung et al. (2017) (I2 = 44.5%, P = 0.062), indicating that these outlier cohorts may be the source of statistical heterogeneity. The combined HR for the remaining studies was 2.33 (95% CI = 2.11–2.58) (Supplemental Figure 5). Furthermore, the HR calculated from the TCGA GBM dataset affected the results in the subgroup of patients with glioblastoma, as well as the mRNA-testing group (Figure 4).

Figure 4. Sensitivity analysis for NNMT upregulation on OS in (A) patients with solid tumor, (B) subgroup of glioblastoma, (C) mRNA-testing group. 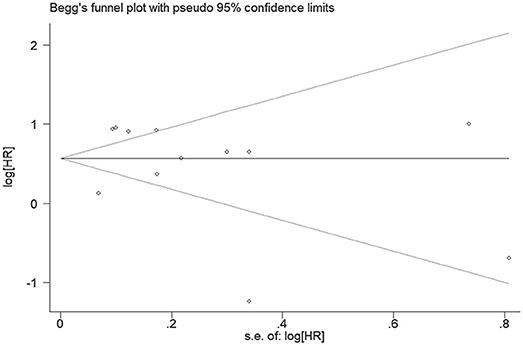 Figure 5. Funnel plots of included studies in the analysis of NNMT expression and the prognosis for solid tumors.

To reduce heterogeneity in our study, we conducted subgroup and sensitivity analyses to explore the source of the observed heterogeneity. Firstly, we conducted a subgroup analysis of patient ethnicity, and classified the studies into either Asian or non-Asian groups. Different heritage backgrounds and dietary habits between Asian and Western populations contribute to different cancer histopathology and survival outcomes. Squamous cell cancer is the most prominent type of esophageal cancer in Asia; however, esophageal adenocarcinoma predominately affects Caucasian men (Zhang et al., 2012). Fukagai et al. showed that Japanese patients who have received hormonal treatment have long overall survival compared with Caucasian patients. Race also acts as an important prognostic factor in patients with prostate cancer (Fukagai et al., 2006) and pancreatic cancer. The median survival time after diagnosis for patients with pancreatic cancer is longer in Asian patients than that in Caucasians; whereas, the proportion of patients with papillary carcinomas or mucinous cystadenocarcinomas is higher in Asians than that in Caucasians or blacks (Longnecker et al., 2000). Finally, a study by Jung et al. investigated prognosis for patients with glioblastoma in six major databases (Jung et al., 2017); thus, we chose to conduct a subgroup analysis.

In our sensitivity analysis, we found that the study conducted by Zhou et al. (2014) and the TCGA GBM dataset from Jung et al. (2017) may be the source of heterogeneity. Zhou et al. found significantly elevated levels of NNMT in high-grade prostatic intraepithelial neoplasia and well-differentiated prostate cancer compared with benign prostate hyperplasia, indicating that NNMT may play different roles during tumorigenesis and tumor progression in prostate cancer. However, this study only focused on 81 patients with advanced prostate cancer. Moreover, abnormal testosterone levels are implicated in the progression of prostate cancer. NNMT can regulate sex-dependent methylation in mouse, implying NNMT expression may be influenced by alterations in sex hormone levels (Takasugi et al., 2013). Notably, the effects of sex hormones in prostate cancer differ from their effects in other types of solid tumors. With regard to the TCGA GBM dataset from Jung et al. (2017), the data taken from The Cancer Genome Atlas (TCGA) lacks sufficient clinicopathological information about the patients. Thus, heterogeneity may be caused by biological types of solid tumors, as well as by the clinicopathological staging of patients.

There were some limitations to our study. Firstly, different experimental methods were used to detect NNMT expression levels, which may cause inter-study heterogeneity. Secondly, we searched references published in English and Chinese, which may have led to publication bias. Thirdly, the survival data of six cohorts were obtained from online databases. Finally, because some studies did not provide HR and 95% CI directly, we calculated HR from the obtained survival curves.

The Supplementary Material for this article can be found online at: https://www.frontiersin.org/articles/10.3389/fphys.2018.01407/full#supplementary-material

Supplemental Figure 1. Forrest plot of the subgroup analysis (ethnicity) for the effect of NNMT upregulation on OS in patients with solid tumor.

Supplemental Figure 2. Forrest plot of the subgroup analysis (methods extracted HR) for the effect of NNMT upregulation on OS in patients with solid tumor.

Supplemental Figure 4. Forrest plot of the subgroup analysis (sample size) for the effect of NNMT upregulation on OS in patients with solid tumor.

Supplemental Figure 5. Meta-analysis of the correlation between NNMT and OS across homogenous studies excluding Zhou's study and TCGA GBM dataset.

Copyright © 2018 Li, Qiao, Yang and He. This is an open-access article distributed under the terms of the Creative Commons Attribution License (CC BY). The use, distribution or reproduction in other forums is permitted, provided the original author(s) and the copyright owner(s) are credited and that the original publication in this journal is cited, in accordance with accepted academic practice. No use, distribution or reproduction is permitted which does not comply with these terms.