Twenty recreational male heel strike runners (25.8 ± 1.6 years, 67.8 ± 5.3 kg, 1.73 ± 0.05 m) participated in this study, consistent with previous running studies (Hanley and Tucker, 2018; Sanno et al., 2018; Hoenig et al., 2019). The inclusion criteria was participants would have over ground or treadmill running history with an average distance of 30 km per week and preference using typical running shoes. Participants were free from lower extremity disorders and injuries. Foot deformities, such as hallux valgus, over pronation or supination, pes planus, and pes cavus, were excluded during recruitment. Written consent was obtained prior to the test. Ethics was approved from the Human Ethics Committee at Ningbo University (RAGH20161208).

After warm-up and lab familiarization, the FPI was evaluated and recorded as scores (from -2 to 2 per item). The total score would be classed as high supination (-12), supination (-5), neutral (0), pronation (5), and high pronation (12) while static barefoot standing with shoulders’ width apart (Redmond et al., 2006). Data of marker trajectories and ground reaction force from two static and five running trials were collected of the right foot striking the force plate. After the baseline test, participants ran 5 k on the treadmill at their self-selected speed (which were recorded in the range of 10–12 km/h) using participants’ own typical running shoes. This was not chosen to elicit fatigue but elicit submaximal effort (Hanley and Tucker, 2018). The post-5 k test started within 5 min of finishing the treadmill run, following the same protocols as the baseline test (with participants barefoot).

An updated version of the original OpenSim musculoskeletal model (Delp et al., 2007), which included the patella (DeMers et al., 2014), was used for this study. This model included the torso and lower extremity, which had six degrees of freedom at the pelvis, a ball-and-socket joint with three degrees of freedom at the hip, pin joints at the ankle, subtalar and metatarsophalangeal joints. A non-frictional patella articulated with the femur and prescribed by the knee angle was also added to direct the quadriceps force, wrapping around the patella and attaching to the tibial tuberosity (DeMers et al., 2014). The default model included a hinge joint for flexion-extension of the knee, and was extended to include abduction-adduction motion based on a previous study (Meireles et al., 2017).

Muscle forces were previously reported as the main factors affecting joint contact forces (DeMers et al., 2014; Lerner et al., 2015; Lerner and Browning, 2016). The “Static Optimization” (SO) with weighted factors was employed to compute muscle activation and forces, which improves the accuracy of joint contact force prediction (DeMers et al., 2014; Lerner and Browning, 2016). Following previously established protocols to reduce prediction errors (Lerner et al., 2015; Lerner and Browning, 2016), the weighting factors for muscles were set at 1.5 for the gastrocnemius, 2 for the hamstrings and 1 for other muscles in this study. The contact forces to the hip, knee and ankle joints in the anterior/posterior (x), superior/inferior (y), and medial/lateral (z) directions were computed using “Joint Reaction” (JR) analysis for the femur, tibia and talus, respectively.

Figure 3. The hip contact forces (A–C) during stance with statistics (spm{t}) from spm1d (“+” and “-” represent directions). 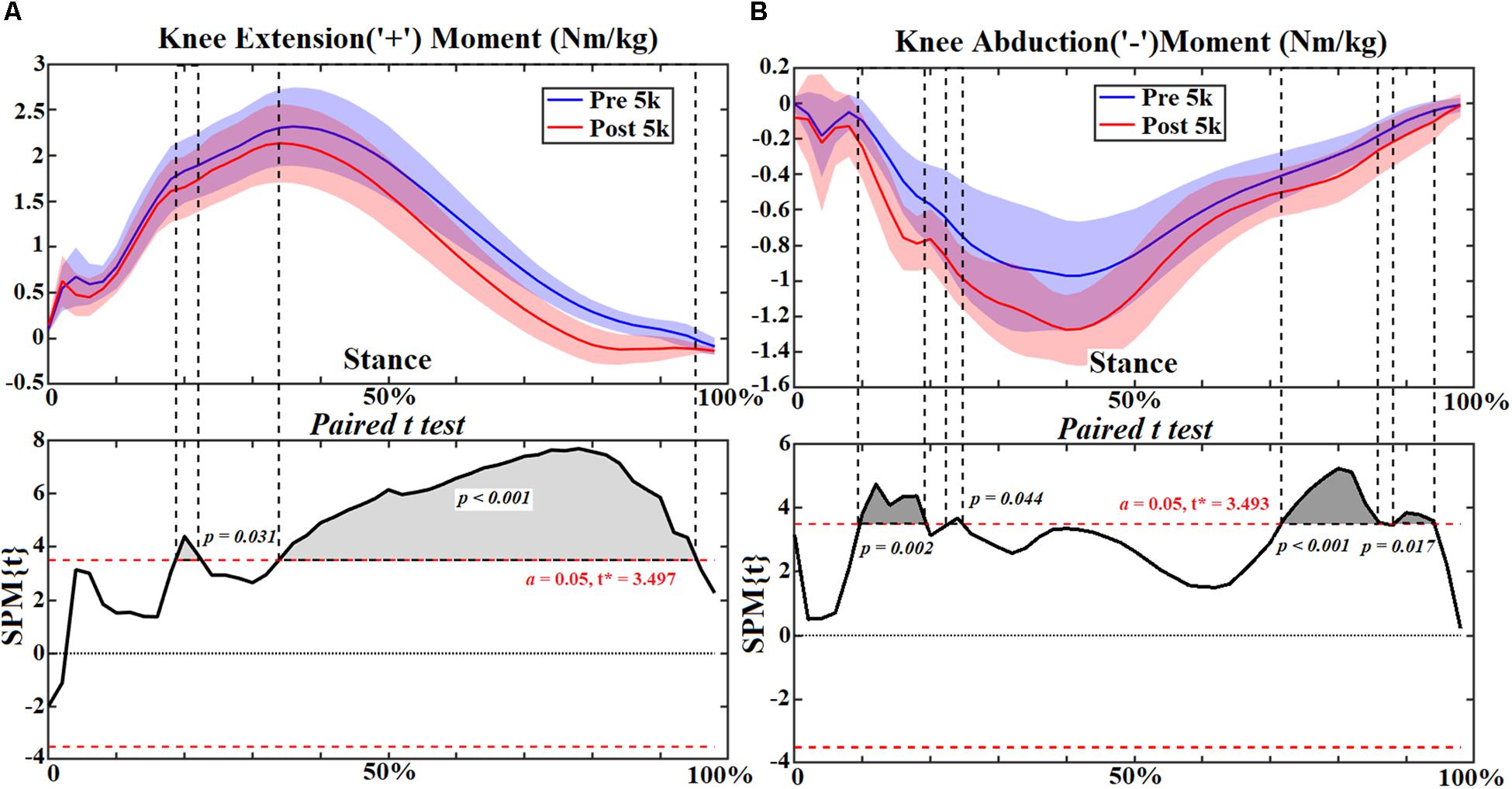 Figure 5. The knee joint moments (A,B) during stance with statistics (spm{t}) from spm1d (“+” and “-” represent directions). 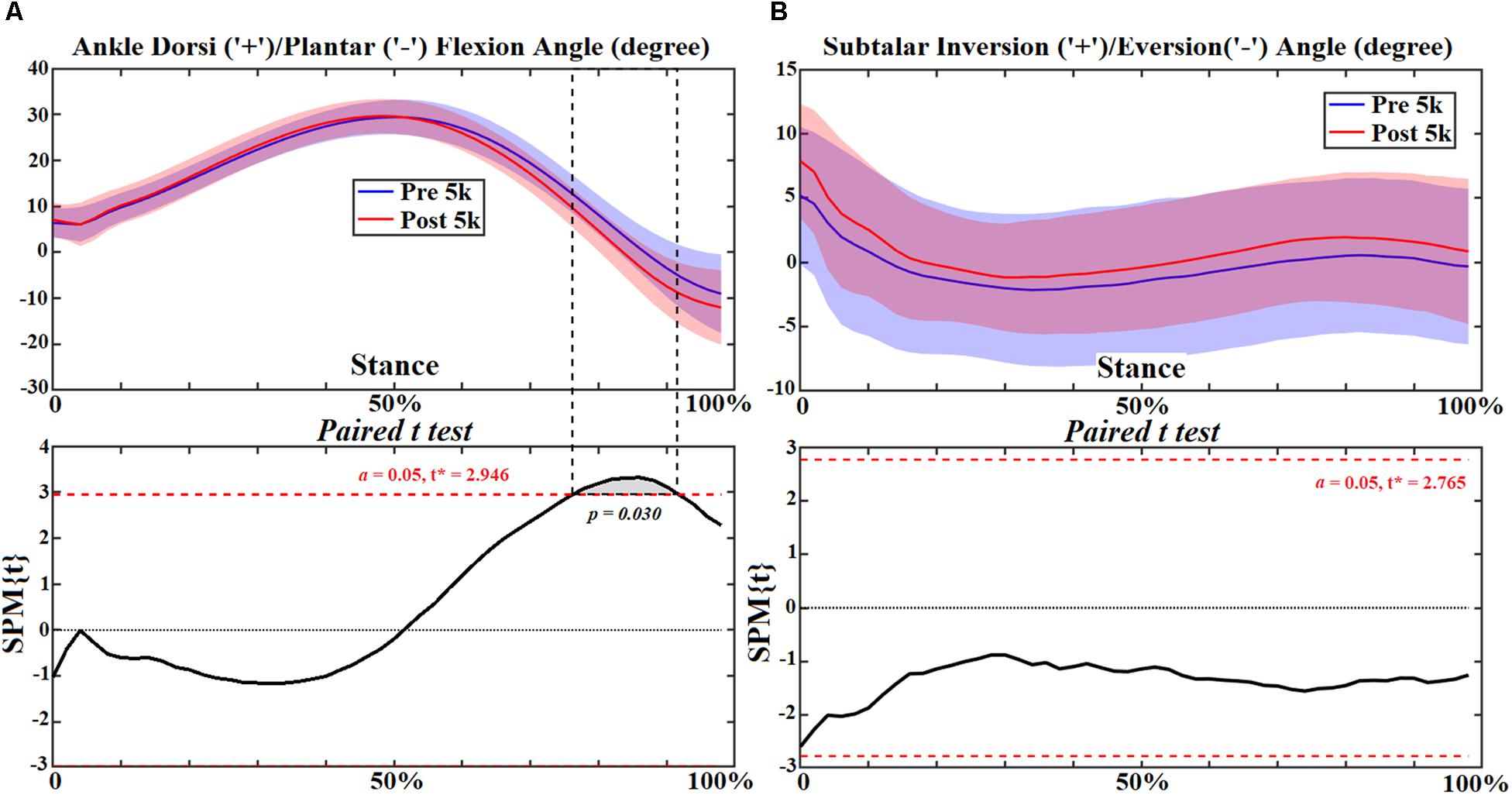 Figure 8. The ankle and subtalar joint angles (A,B) during stance with statistics (spm{t}) from spm1d (“+” and “-” represent directions). 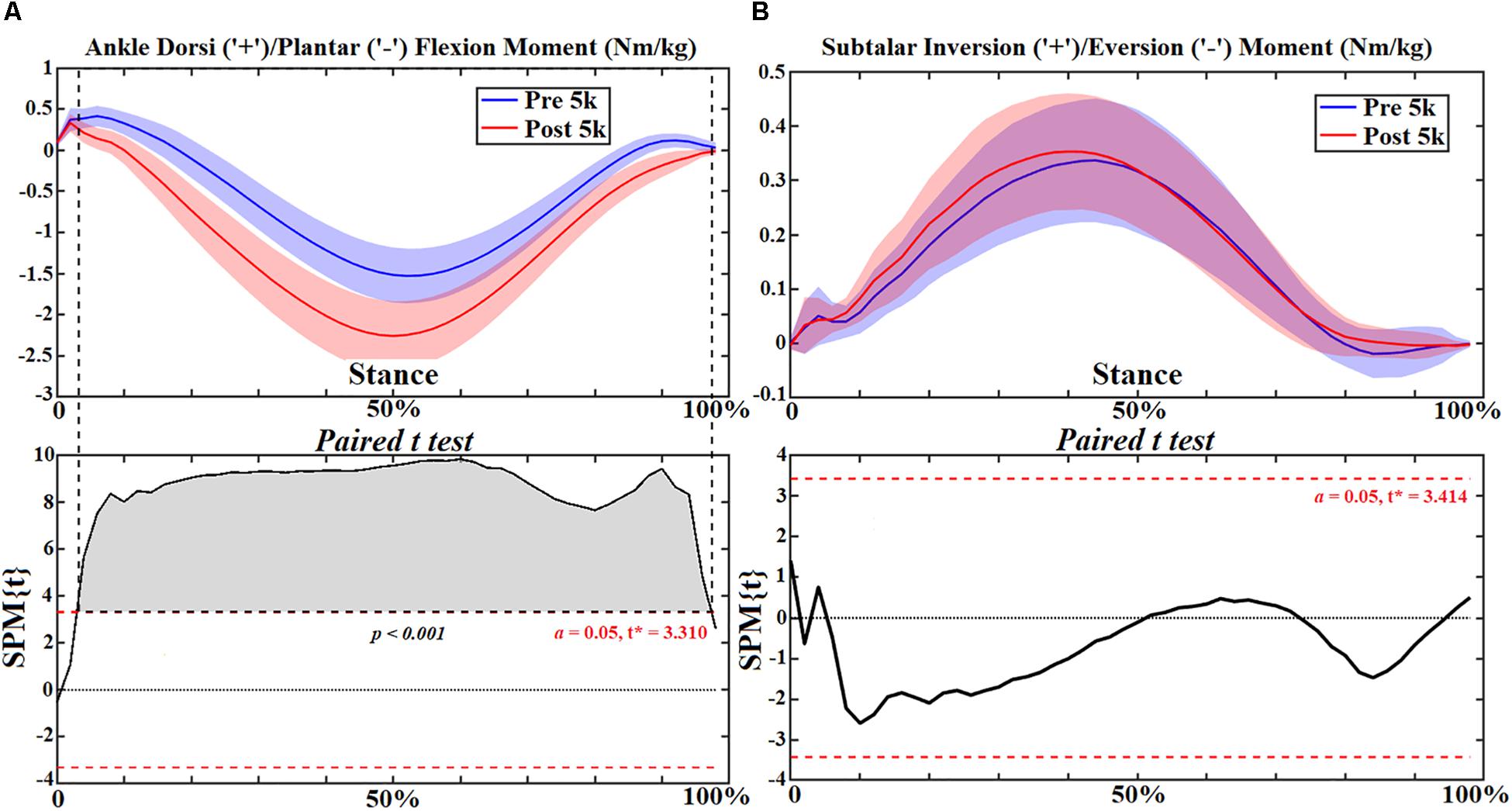 Figure 9. The ankle and subtalar joint moments (A,B) during stance with statistics (spm{t}) from spm1d (“+” and “-represent directions).

Figure 11. The correlation of peak ankle (A) and subtalar (B) moments with FPI.

The human foot attenuates shock at the arch during weight bearing in stance. Due to repetitive loading from prolonged running activities, reduced arch height and pronated foot posture are reported in long distance runners (Fukano et al., 2018; Mei et al., 2018), which is consistent with the increased foot pronation assessed using the FPI in this study. Foot pronation may be associated with several RRI, which remain a conflicting issue in the biomechanics community. High arch runners present with higher incidence of ankle injuries, in contrast low arch runners exhibit more knee injuries (Williams et al., 2001), specifically the medial tibia stress syndrome among lower arch and pronated foot runners (Bennett et al., 2001). Greater knee abduction moment has been reported during walking and running in athletes with a low foot arch (Powell et al., 2016). This is consistent with the current study that showed a moderate correlation between FPI (pronated with low arch) and peak abduction moment. It should be acknowledged that participants in this study wore their preferred shoe design and this was not controlled for. Shoe design has been shown to influence pronation including motion control shoes (Malisoux et al., 2016), maximal, neutral, and minimal shoes (Mei et al., 2014; Pollard et al., 2018; Xiang et al., 2018). Footwear design or wearing no shoes at all may influence the motor control system during running (Feng and Song, 2017; Santuz et al., 2017).

Stance contact time after 5 k running was consistent with a recent study of intersegmental work contribution during a prolonged run (Sanno et al., 2018). However, the average speed of runners in this study was ∼3.1 m/s, which was slower than the study of exhaustive maximal 10 k treadmill running (Hanley and Tucker, 2018) reported as ∼4.7 m/s. This is likely due to runners in that study being competitive compared to the recreational class of the runners in the present study. Comparison with other recreational running studies revealed speeds of 3.3–3.4 m/s (Hoenig et al., 2019) and 3.2 m/s (Chan-Roper et al., 2012), which was consistent with our findings.

Sagittal and coronal hip kinematics remained unchanged post-5 k running in this study. This was consistent with a 10 k treadmill study of recreational runners at the same 5 k mark (Sanno et al., 2018). In overuse injuries in recreational runners it has been reported that hip flexor, abductor and external rotator muscle strength is reduced (Niemuth et al., 2005; Luedke et al., 2015; Kollock et al., 2016). The reduced muscles lead to an imbalance of the hip joint moments and the net result is increased extension, abduction and internal rotation moments. This is consistent with the current study where we found increased extension moment, abduction moment and internal rotation moment during the initial contact of stance.

Ankle joint kinematics at heel strike and toe off during pre- 5 k and post-5 k were consistent with recent studies (Reenalda et al., 2016; Sanno et al., 2018) showing similar profiles and range of motion. The subtalar joint angle and moment patterns were unchanged post-5 k running, however, the single calcaneus marker used in this study may not be suited for dynamic subtalar joint motions in the frontal plane and should be considered as a limitation (Wang and Gutierrez-Farewik, 2011; Fischer et al., 2017). Our study showed increased plantarflexion during push off and plantarflexion joint moment throughout stance post-5 k running. One item exhibited from the FPI in this study was increased calcaneus eversion at the subtalar joint post-5 k running. This is consistent with a study that reported subtalar over eversion was found to enlarge the plantar flexors and tibialis anterior muscles (Wang and Gutierrez-Farewik, 2011). Further, increased plantar flexor muscles and tibialis anterior (dorsiflexor) may contribute to increased ankle contact forces. This is consistent with the increased ankle contact force observed in this study.

This study presents an investigation of the changes in foot posture, joint kinematics, joint moments and joint contact forces in the lower extremity following a 5 k treadmill run in 20 participants. A relationship between knee and ankle joint loading and FPI was developed. It was found that hip joint moments and contact forces increased during initial foot contact following 5 k running. Knee abduction moment and superior-inferior knee contact force increased, whereas the knee extension moment decreased. Ankle plantarflexion moment and ankle contact forces increased during stance. A useful finding was that the FPI was moderately correlated with peak knee and ankle moments. The FPI showed that recreational male runners presented increased static foot pronation after 5 k treadmill running. These findings suggest that following mid distance running change in foot pronation may be an early indicator of increased lower limb joint loading. Furthermore, the FPI may be used to quantify the changes in knee and ankle joint moments. Specifically, increase in FPI leads to an increase in knee flexion moment, knee abduction moment, ankle plantarflexion moment and subtalar inversion moment.

This study was approved by the Ethical Committee in the Research Academy of Grand Health, Ningbo University (RAGH20161208).

This study was sponsored by National Natural Science Foundation of China (No.81772423), and K. C. Wong Magna Fund in Ningbo University. QM of this paper is supported by the New Zealand-China Doctoral Research Scholarship issued from the Ministry of Foreign Affairs and Trade (New Zealand).

The Supplementary Material for this article can be found online at: https://www.frontiersin.org/articles/10.3389/fphys.2019.00573/full#supplementary-material

Copyright © 2019 Mei, Gu, Xiang, Baker and Fernandez. This is an open-access article distributed under the terms of the Creative Commons Attribution License (CC BY). The use, distribution or reproduction in other forums is permitted, provided the original author(s) and the copyright owner(s) are credited and that the original publication in this journal is cited, in accordance with accepted academic practice. No use, distribution or reproduction is permitted which does not comply with these terms.