DNA methylation is a representative epigenetic mechanism in the mammalian genome. This process involves methyl group transfer to the C5 position of cytosine, which forms 5-methylcytosine in the genome. DNA methylation sites regulate gene expression by recruiting proteins involved in inhibition of gene transcription or by blocking the binding of transcription factors to DNA (Moore et al., 2013). Recently, most researchers found that DNA methylation is considered an important marker of permanent gene silencing or reactivation (Mazzio and Soliman, 2012).

To investigate the changes of human biochemical/metabolic parameters in long-term isolation environment, the four-person 180-day CELSS Experiment was conducted in June 2016 (Xu et al., 2018). This experiment explored the change characteristics of physiology, psychology and behavior of volunteers during long-term isolation. The measured data included brain function, blood DNA methylation, cardiovascular function, biological rhythm, and sleep information (Xu et al., 2018). The DNA methylation and biochemical/metabolic parameter data accumulated in this experiment have the advantages of continuous tracking, multiple time point detection, and multidimensional omics. Therefore, we use these data for the integrated analysis of methylation and biochemical/metabolic parameter correlation.

Peripheral whole blood cells were extracted from all four volunteers (three males and one female) before breakfast on the 12 sampling points (−45, −15, +2, +30, +60, +75, +90, +105, +120, +150, +175, and +210 days during the mission). After extraction, the whole blood cells were immediately treated with EDTA anticoagulation, transferred outside of the module and centrifuged (at 3,000 rpm for 15 min at 4°C) to isolate the plasma from the blood cells. The plasma parameter concentrations or counts were assayed with ELISA kits (R&B, United States) or RIA kits (R&B, United States) according to the manufacturer’s instructions.

DNA methylation profiling for the blood cells were determined using the Illumina 450k platform. All 48 samples were tested in one batch. DNA were extracted from the frozen blood samples by standard proteinase K/RNase treatment and phenol/chloroform extraction. Bisulfite modification of DNA (≥500 ng for each sample) was conducted using an EZ DNA Methylation Kit (Zymo Research) according to the manufacturer’s procedure. The Infinium Methylation 450K assay was performed according to Illumina’s standard protocol. The methylation profiling data are archived at the NCBI GEO online repository, accession GSE133118.

Raw intensity data (IDAT) files were imported into the R environment (version 3.4.1) and processed using the ChAMP and minfi packages. All analyses were performed in R using packages available from the Bioconductor project. The following probes were removed in data preprocessing:

1. Filtering probes with a detection p-value above 0.01 in one or more samples: 12497 probes were removed;

4. Filtering probes that align to multiple locations: 8393 probes were removed;

5. Filtering probes on the X and Y chromosomes: 10936 probes were removed.

Then the analysis would be proceeded with 425207 probes and 48 samples.

Since many EWAS aim to identify associations between methylation and diseases or environmental factors that have relatively small effects on the methylome (<10%), unwanted variation can be a significant problem for such studies. To minimize the technical error and its influence on the biological variation, we used samples of Day-45 and Day-15 as baseline replicates for each volunteer.

The following criteria were kept for further filtering of the most biological meaningful probes:

1. For each subject, probes with sdpersonal(β) (standard-deviation of β-value across sampling points) > error(β) between two pairs of replicates (Day-45 and Day-15) were kept for further analysis, as for the methylation variations of probes across the experiment were more biological meaningful than technique errors. For each subject, the summary of sdpersonal(β) was shown as in Table 1, and the summary of errpersonal(β) was shown as in Table 2. 192616 Probes fitting this criterion for all four subjects were kept for further analysis.

2. For each subject, sdpersonal(β) > 0.03. Using his criterion, we filtered the most variated methylation probes. 31821 probes were kept.

3. The intersect probes fitting the above 2 criteria were kept for further analysis.

Table 1. The summary of sdpersonal(β).

Table 2. The summary of errpersonal(β). 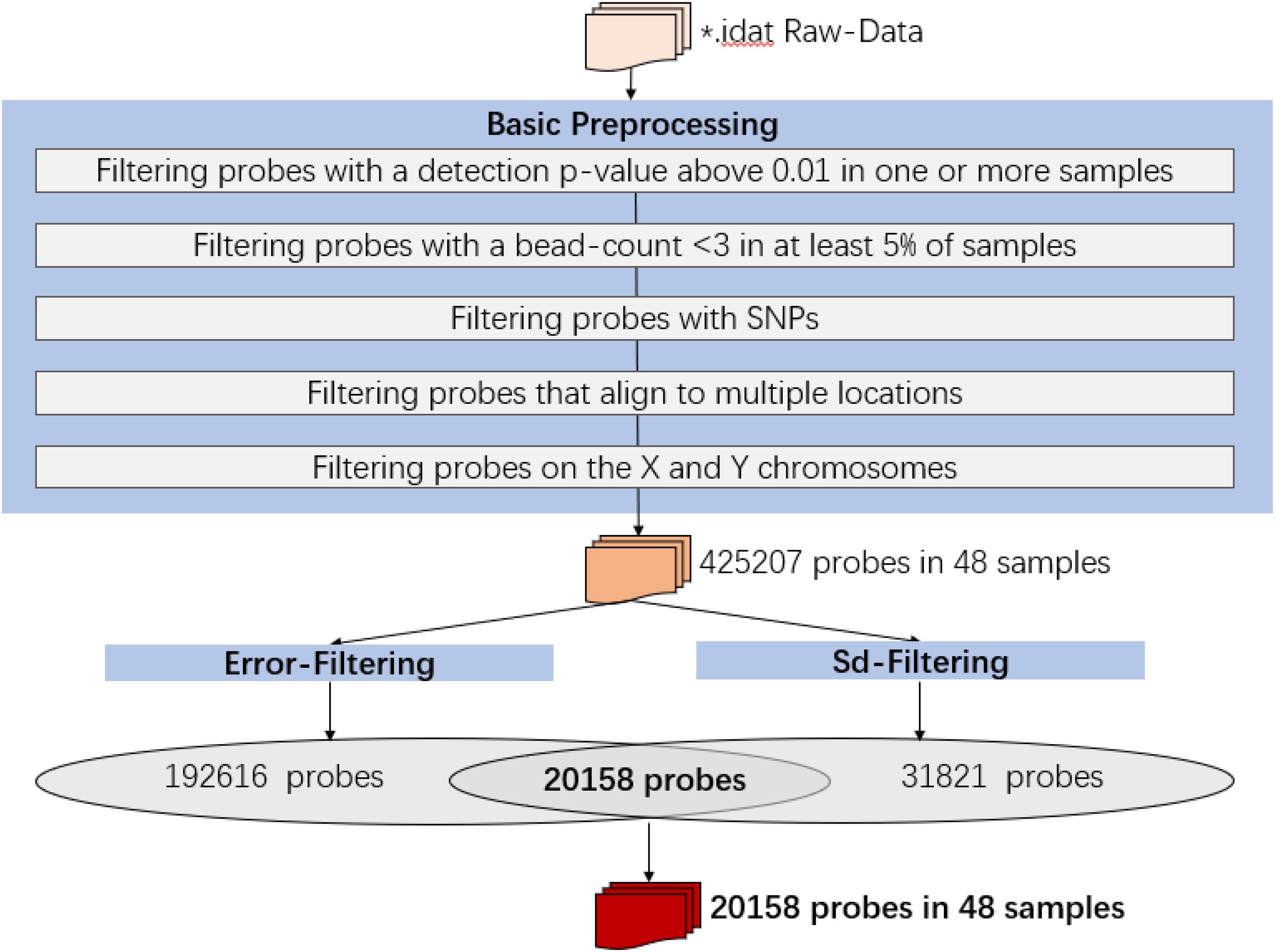 Biclustering Analysis Based on FABIA

The FABIA algorithm was used to perform biclustering analysis for the above four DNA methylation site-biochemical/metabolic parameter correlation matrixes (Hochreiter et al., 2010). According to your suggestions, we have added the detailed rationales of FABIA in our revised manuscript (line139∼line148): FABIA is a multiplicative model-based biclustering approach that assumes realistic non-Gaussian signal distributions with heavy tails (Hochreiter et al., 2010). It is based on multiple model selection techniques, such as variational methods and Bayesian framework. Analysis of several real biological data proved that FABIA can determine the information content of each bicluster to separate spurious biclusters from true biclusters effectively (Hochreiter et al., 2010). This biclustering approach models the data matrix X as the sum of p biclusters plus additive noise γ, where each bicluster is the outer product of two sparse vectors: a row vector λ and a column vector z. The model for the matrix X is as follows:

Then, to make the matrixes conform to the input criteria of the FABIA algorithm, we used the scale function in R to normalize the matrix. The processed matrixes were conformed to the standard normal distribution, i.e., the data mean is 0 and the standard deviation is 1. In our study, FABIA 2.2.2 software was used to search K biclusters of the four 20158 × 223 matrixes. K (the number of biclusters) was set to 50. The sparseness factor was set to 0.1 and the number of iterations was set to 15000. The FABIA algorithm was implemented in the “fabia” package of R script.

For the FABIA-derived biclusters of the four volunteers, when the number of biclusters (K) ≥ 8, the superfluous bicluster information content was close to zero, indicating that the biclusters contained all the information of the matrix (Figure 2) (see Materials and Methods). The biclustering process are tested on a computer with 3.60 GHz quad-core Intel Core CPUs and 8 GB main memory, which running time is about 312 h. Bicluster 1 involves the richest information and bicluster 7 involves the poorest (Figure 2). In the clustering results obtained by the FABIA method, one DNA methylation probe or one biochemical/metabolic parameter can participate in multiple biclusters. 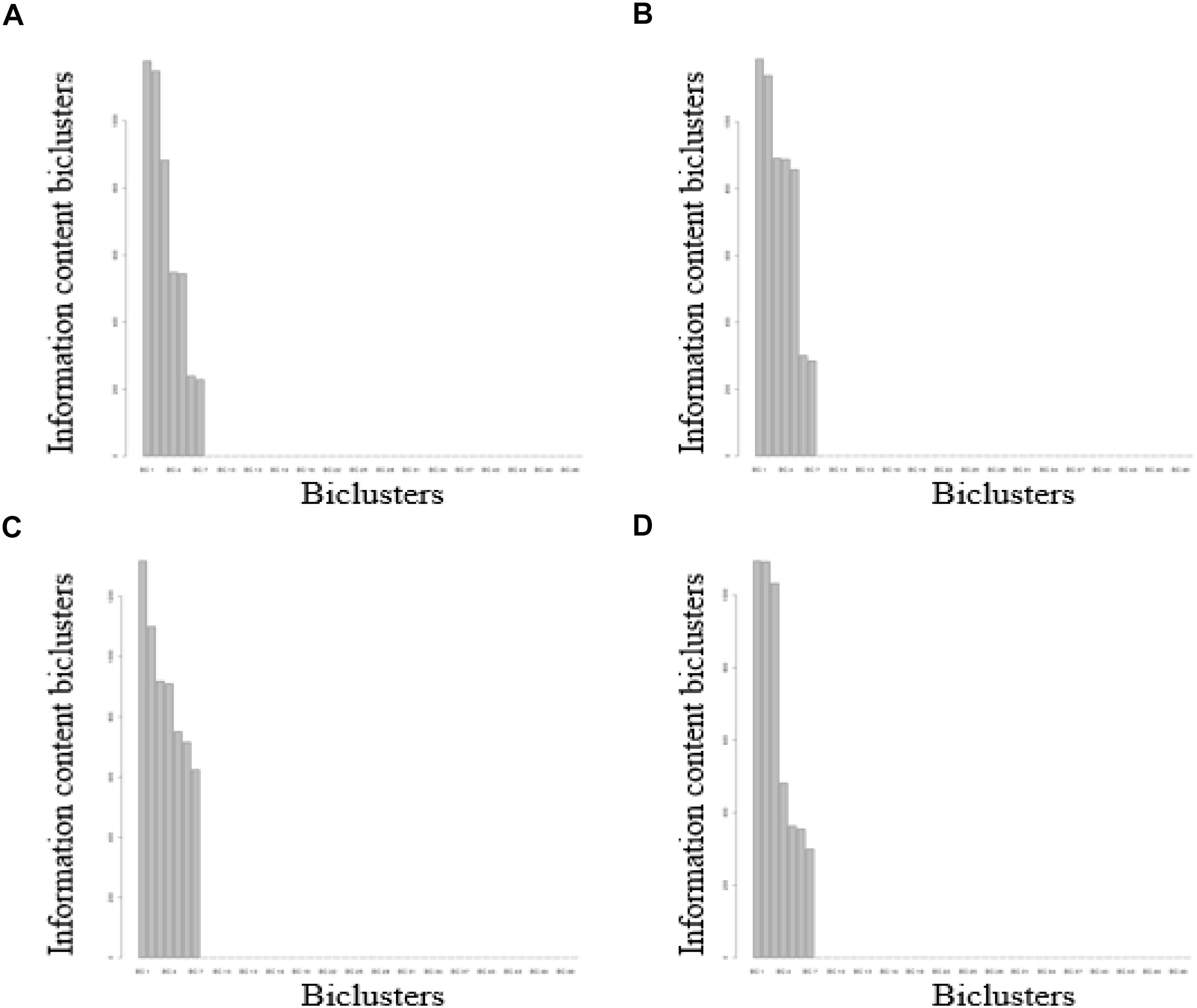 In addition, we compared the corresponding gene location distribution of the DNA methylation probes for the original 450k chip, FABIA input probes, and FABIA-derived biclusters of the four volunteers. As showed in Figure 4, the ratio of the FABIA input probes located in the corresponding gene body regions was significantly higher than that of the 450k chip, and the probes contained in the FABIA-derived biclusters retained this property. 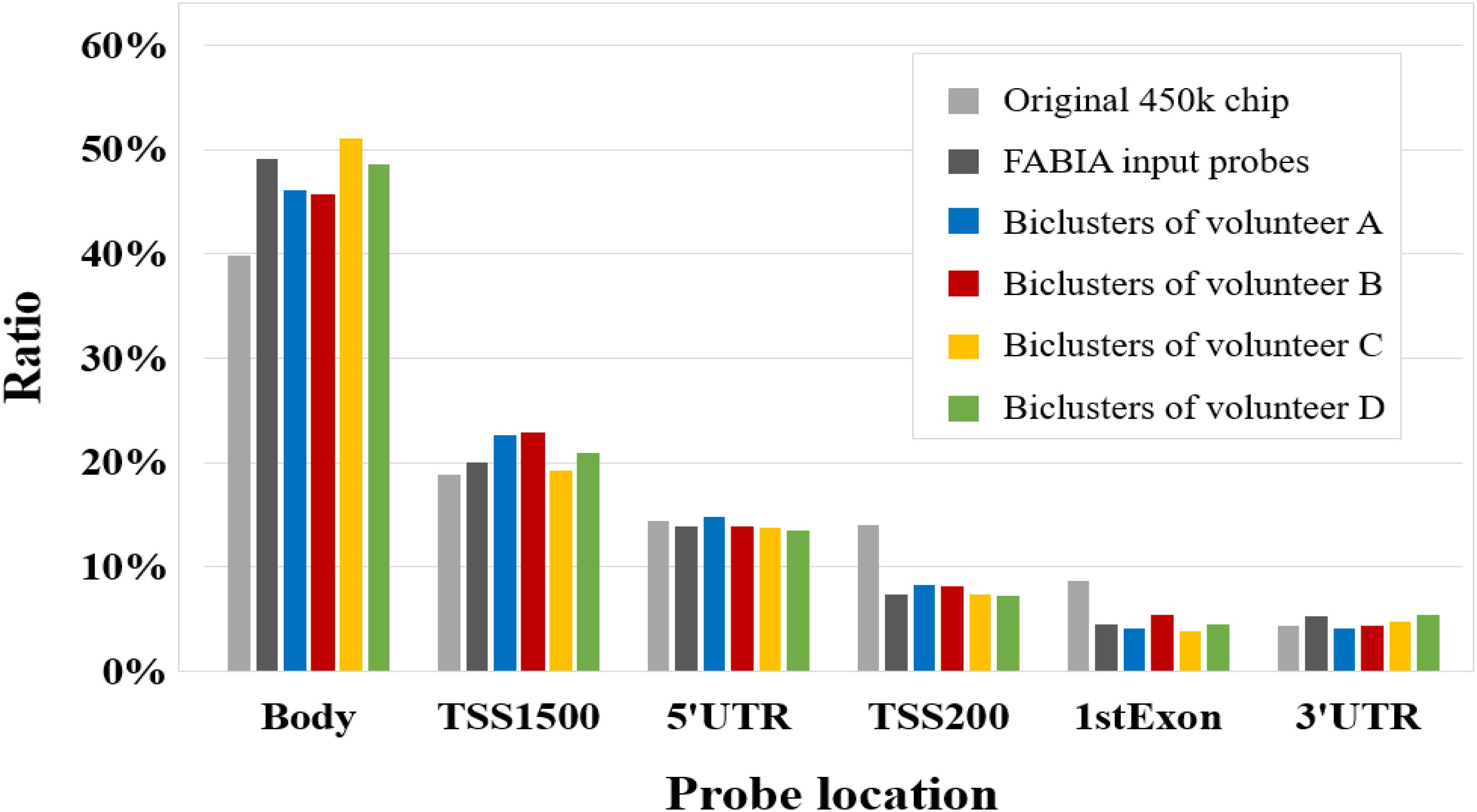 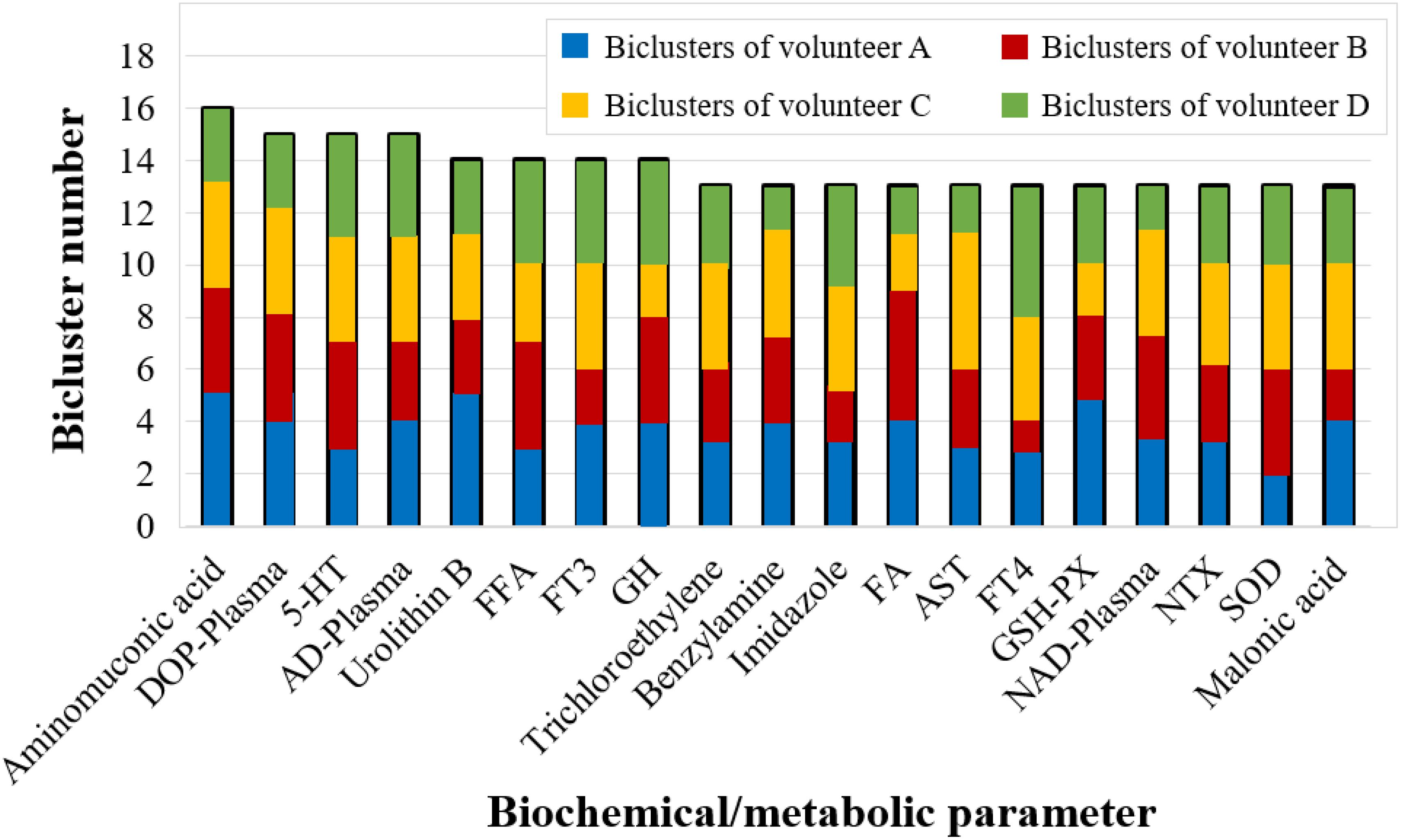 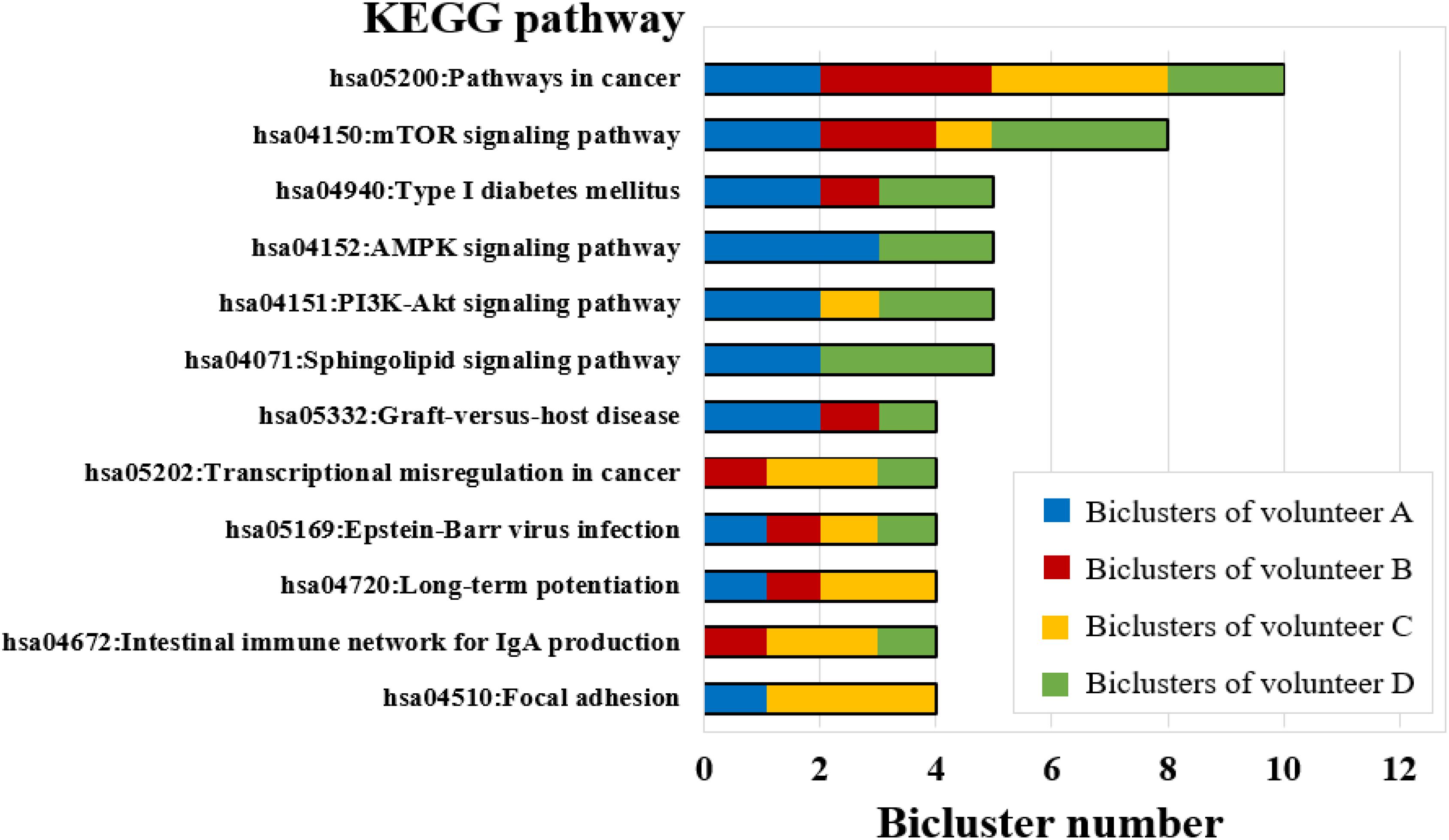 Further, a query of the KEGG PATHWAY Database showed that several above pathways are associated with the same disease type. For example, the focal adhesion pathway is related to growth delay due to insulin-like growth factor I resistance, the AMPK signaling pathway is related to leptin receptor deficiency, the type I diabetes mellitus pathway is related to type 1 diabetes mellitus, and all of these diseases can be classified as endocrine and metabolic diseases (Qiu, 2013). In addition, the focal adhesion pathway is related to Limb-girdle muscular dystrophy, which is belonged to musculoskeletal diseases (Qiu, 2013). The above results are consistent with the effects of long-term isolation on the human body in the 4-person 180-day experiment, including disturbances in the endocrine, metabolism, and musculoskeletal systems. 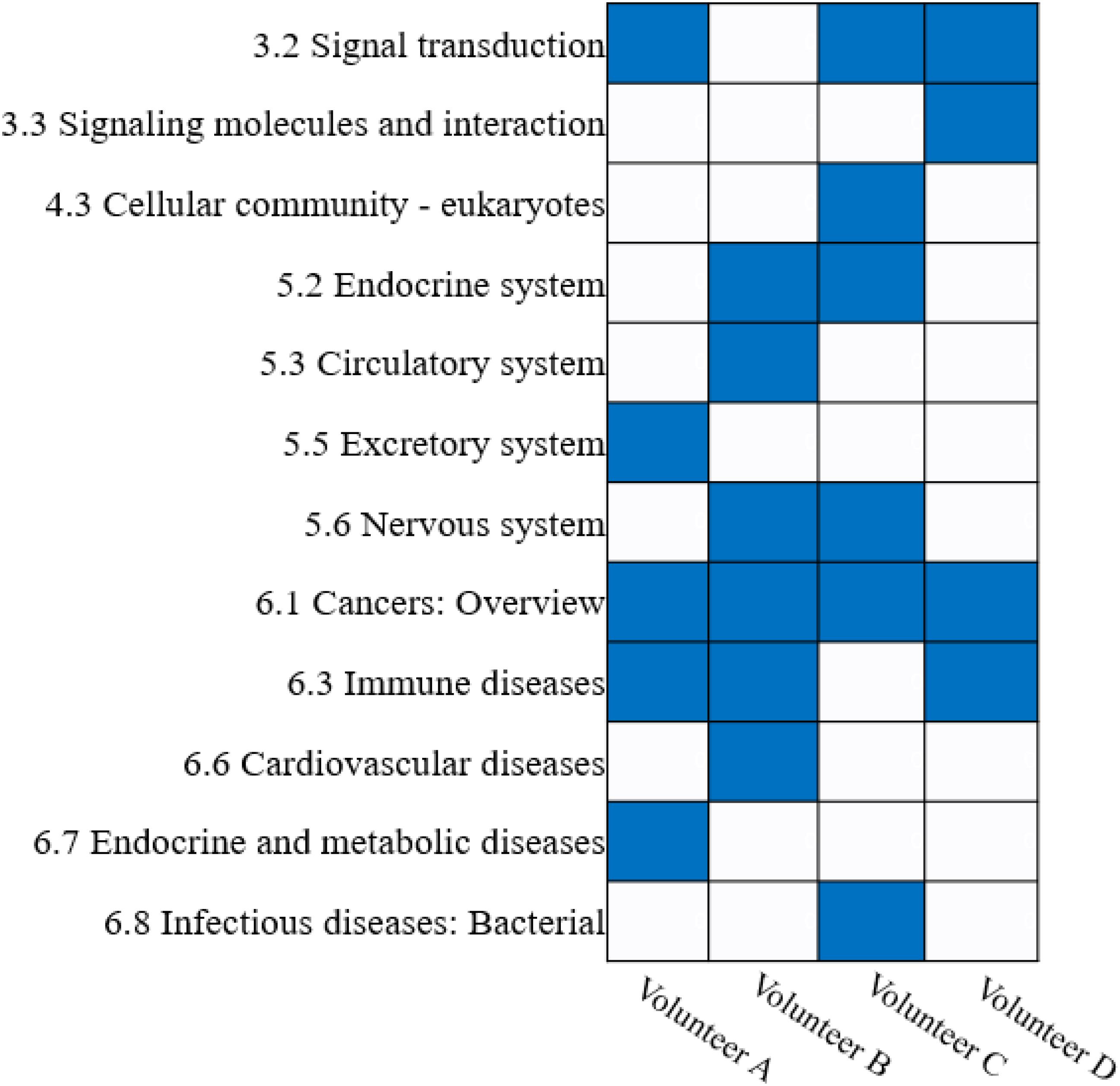 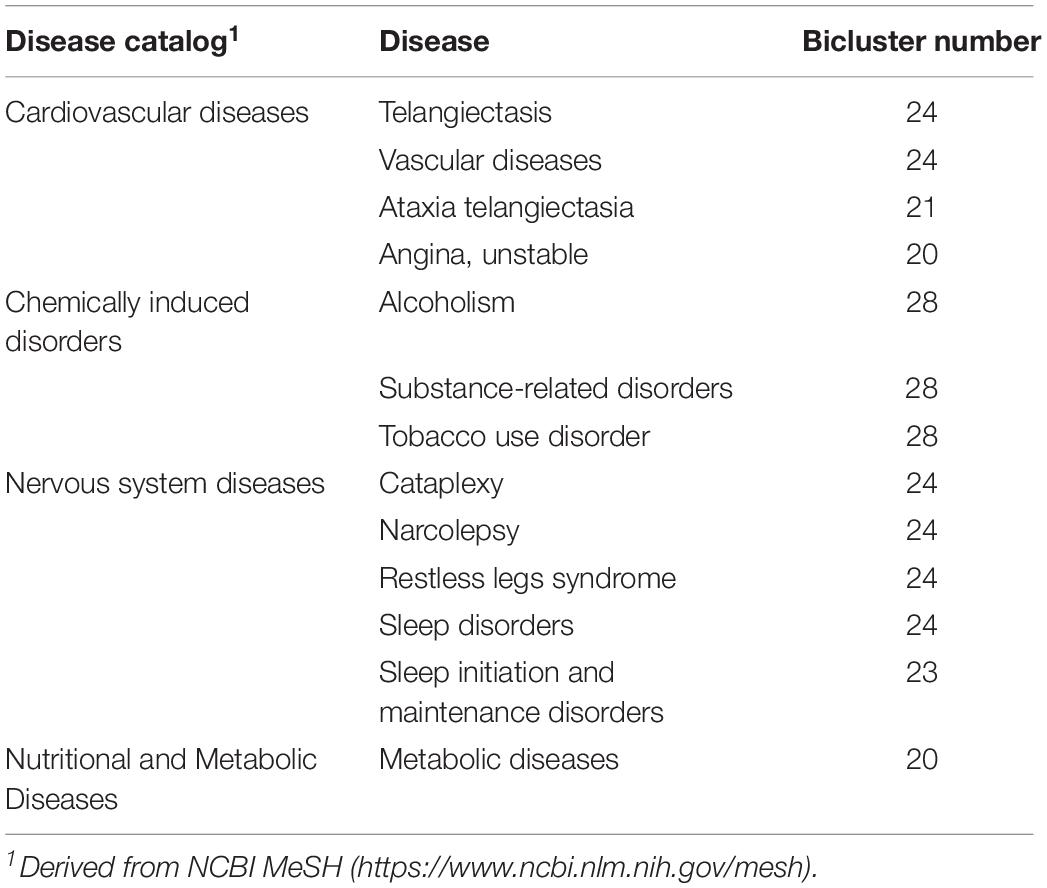 Figure 9. Validation of DNA methylation gene-biochemical/metabolic parameter associations using the STITCH database. (A) By the hypergeometric test, (B) by the permutation test. Lines indicate the frequency of STITCH-validated associations derived from 1,000 random combinations of DNA methylation genes and biochemical/metabolic parameters, and red triangle indicate the number of STITCH-validated associations obtained from the FABIA-derived biclusters.

In this paper, we constructed 28 biclusters using the FABIA algorithm based on the 180-day CELSS experiment-derived DNA methylation and biochemical/metabolic parameter data of four volunteers at 7 time points. The results show that the biochemical/metabolic parameters related to mood state (DOP-Plasma, 5-HT, AD-Plasma) and glucose metabolism (aminomuconic acid, FT3 and FFA, GH) involved the largest number of biclusters, suggesting that these two parameter types have a significant change trend in the long-term isolation environment. In addition, analysis of the biological functions of the genes covering each biclusters showed that these genes are significantly enriched in endocrine and metabolic diseases-related and musculoskeletal diseases-related KEGG pathways. The disease enrichment analysis revealed that the above biclusters are significantly associated with cardiovascular diseases and nervous system diseases, particularly sleep disorders. The above results for the FABIA-derived biclusters were consistent with the parameter change characteristics of the human body during the long-term isolation environment, demonstrating the reliability of the biclusters identified by our method.

In this experiment, due to the ethical requirements, four volunteers maintained a healthy state and did not show any diseases or symptoms. However, the data showed that their DNA methylation level, biochemical and metabolic parameters all occurred some disturbances during the long-term isolation. Considering the reliability of these disturbances, our study was only focused on the disturbance-derived disease associations shared among different individuals. The results indicated that there is a significant overlap between the biochemical/metabolic parameter-disease associations obtained from healthy populations during long-term isolation and the associations obtained from patients during disease development. This finding provides insights into the role of the epigenome in biochemical/metabolic parameter change and disease development, and has potential applications in biology and medical research.

In this study, we hypothesized that small sample experiments also have biological significant. Our analysis shows that the biological associations obtained based on small sample experiments have indeed been supported by previous literatures. Certainly, it is not enough to validate this hypothesis just use other literatures, and the lack of independent experimental verification is one of the limitations for this study. It is a provocative hypothesis that needs to be validated by other independent experiments in the future.

In addition, although this paper can obtain some biologically meaningful biclusters based on FABIA algorithm, it is a time-consuming biclustering process. For the four 20158 × 223 matrixes of this study, 15000 iterations are required to make the superfluous bicluster information content was close to zero, and the running time of biclustering process is about 312 h (a computer with 3.60 GHz quad-core Intel Core CPUs and 8 GB main memory). Furthermore, FABIA’s biclustering results also depend on manual adjustment of initial input parameters, including the sparseness factor and number of iterations, which cannot be fully automated clustering. Therefore, there are still other more routine and simplified biclustering algorithms worthy of further attempts by researchers. We expect more interesting results to be generated based on data of small sample experiments. And this study is only used as a heuristic paper for small sample experiments. To sum up, our results indicate the potential applications of the multiple time point detected, micro-perturbed, long-term isolation and small sample experiment-obtained data in biological and medical study.

JX and YL designed the experiments. JX led the epigenetic research and designed the strategy for integrated analysis of DNA methylation with metabolome. FL, KL, YZ, YC, ZX, FD, and LQ performed the sample and the data collection. YQ and FL conducted the DNA methylation data mining and bioinformatics analyses. RX and H-YZ helped in preparing the manuscript. JX and YL interpreted the results. YQ wrote the manuscript.

The Supplementary Material for this article can be found online at: https://www.frontiersin.org/articles/10.3389/fphys.2019.00917/full#supplementary-material

Copyright © 2019 Quan, Liang, Zhu, Chen, Xu, Du, Lv, Chen, Qu, Xu, Zhang, Xiong and Li. This is an open-access article distributed under the terms of the Creative Commons Attribution License (CC BY). The use, distribution or reproduction in other forums is permitted, provided the original author(s) and the copyright owner(s) are credited and that the original publication in this journal is cited, in accordance with accepted academic practice. No use, distribution or reproduction is permitted which does not comply with these terms.