Tooth agenesis is a common congenital anomaly in humans and is more common in oral cleft patients than in the general population. Many previous studies suggested that oral cleft and tooth agenesis share a similar genetic background. Therefore, this study explored the association between isolated tooth agenesis and genetic polymorphisms in genes that are crucial for craniofacial and tooth development. Panoramic radiographs, anamnesis, and genomic DNA from 273 patients were included. Patients were classified as tooth agenesis present, when at least one permanent tooth was congenitally missing. Patients with syndromes and oral cleft were excluded. Only unrelated patients were included. The genetic polymorphisms in BMP2 (rs235768 and rs1005464), BMP4 (rs17563), RUNX2 (rs59983488 and rs1200425), and SMAD6 (rs3934908 and rs2119261) were genotyped by real-time polymerase chain reaction. Genotype and allele distributions were compared between the tooth agenesis phenotypes and controls by Chi-square test. Haplotype and diplotype analysis were also performed, in addition to multivariate analysis (alpha of 0.05). A total of 86 tooth agenesis cases and 187 controls were evaluated. For the rs235768 in BMP2, patients carrying TT genotype have higher chance to present tooth agenesis [p < 0.001; prevalence ratio (PR) = 8.29; 95% confidence interval (CI) = 4.26–16.10]. The TT genotype in rs3934908 (SMAD6) was associated with higher chance to present third molar agenesis (p = 0.023; PR = 3.25; 95% CI = 1.17–8.99). BMP2 was also associated in haplotype and diplotype analysis with tooth agenesis. In conclusion, genetic polymorphisms in BMP2 and SMAD6 were associated with isolated tooth agenesis.

The study protocol was reviewed and approved by the local Ethics Committee (no. 01451418.3.0000.5419). Informed consent was obtained from all participating individuals or parents/legal guardians during the dental appointment and the assent was also obtained from children. The guideline Strengthening the Reporting of Genetic Association (STREGA) was followed for this study (Little et al., 2009).

Tooth agenesis cases were also divided into third molar agenesis and other permanent tooth agenesis subgroups for the analysis.

The selection of the genes was initially based on the screening of previously published studies suggesting that these genes are involved in the maxilla, mandible, and tooth development phenotypes. Then, potentially functional genetic polymorphisms were screened from the dbSNP database1 and SNPinfo,2 based on the following criteria: minor allele frequency (MAF) ≥10% in the global population, and classification of the genetic polymorphisms as potentially functional (for altering amino acid sequence of the protein product, or for occurring in the proximal promoter of the gene and potentially influencing gene expression, or previously associated with craniofacial phenotypes). The characteristics of the selected genetic polymorphisms are presented in Table 1.

For the genotyping analysis genomic DNA was used. The DNA was isolated from buccal epithelial cells by a rinse of saline solution. Briefly, the tubes with saliva were centrifuged and supernatant was discarded. Extraction solution (Tris–HCl 10 mmol/L, pH 7.8; EDTA 5 mmol/L; SDS 0.5%, 1 mL) and proteinase K (100 ng/mL) were added to the tube. Ammonium acetate also was added to remove non-digested proteins and the solution centrifuged. DNA was precipitated with isopropanol and washed with ethanol. DNA was then resuspended and quantified by spectrophotometry (NanoDrop 1000; Thermo Scientific, Wilmington, DE, United States) (Küchler et al., 2012).

The significance level was determined as p < 0.05. 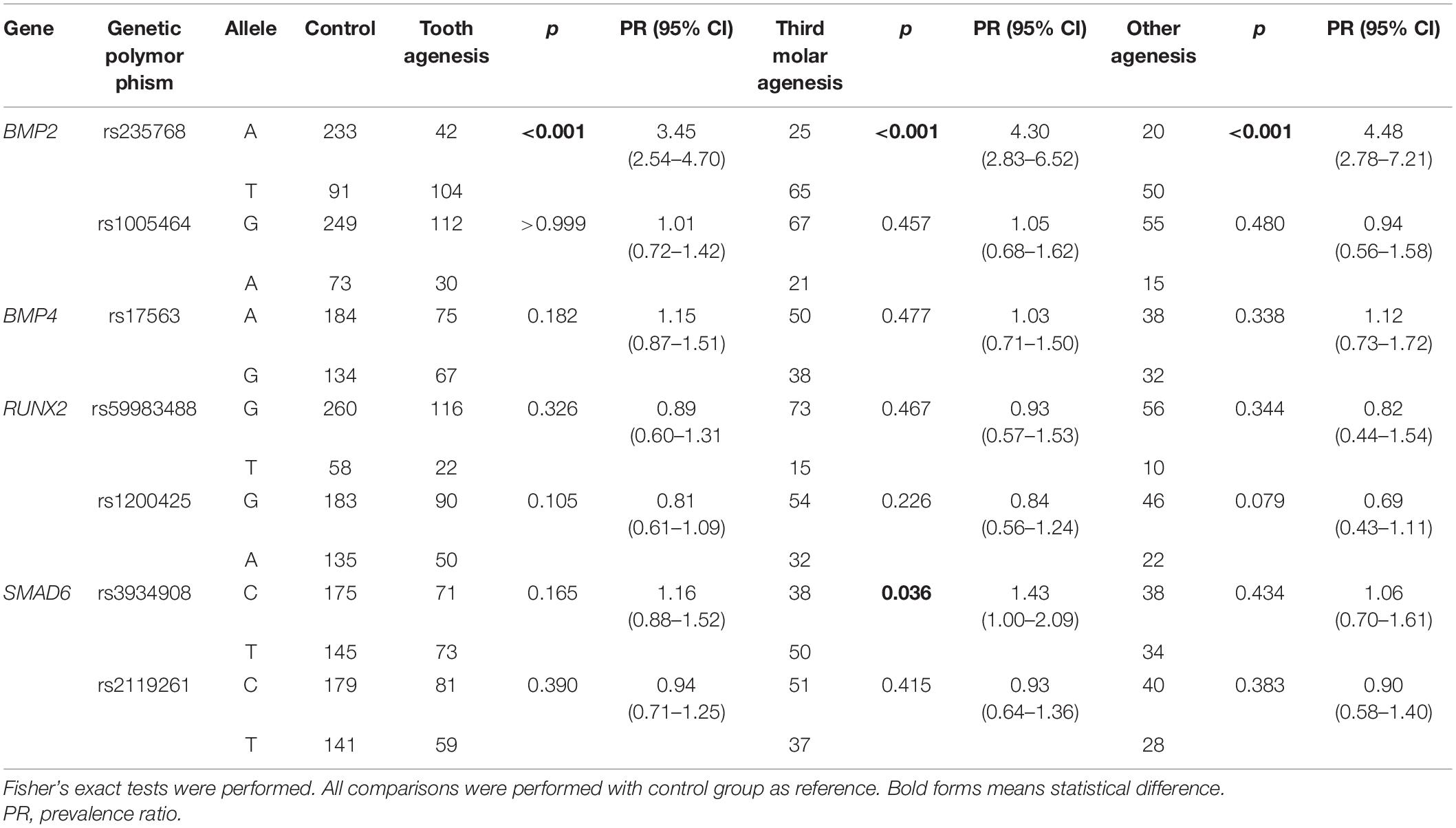 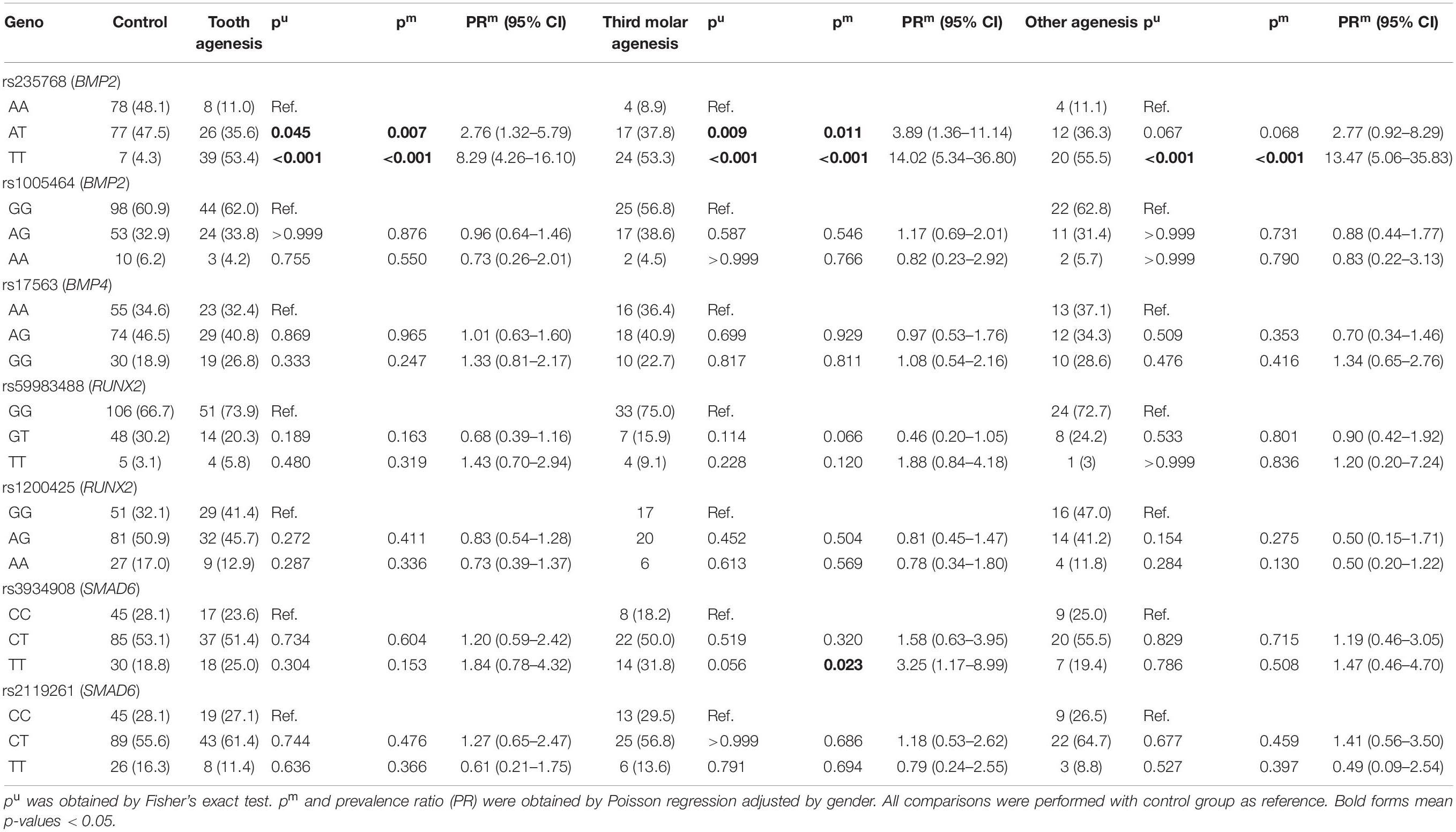 Dental development results from several interactions acting synergistically and antagonistically, leading to tooth epithelium and mesenchyme formation. The process is regulated by different mechanisms involving the expression of several genes (Nieminen, 2009). Mutations and/or genetic polymorphisms in one or more genes involved in the earlier stages of dental development could potentially lead to tooth agenesis. Therefore, in the present study, we replicated genotype–phenotype associations previously observed (Antunes et al., 2012; Gong et al., 2015) and also investigated the association of some novel genes and polymorphisms with isolated tooth agenesis.

In the past decades, innumerous evidence suggests the association between tooth agenesis and oral clefting [revised by Phan et al. (2016)]. Phan et al. (2016) systematically investigated the currently available literature to investigate co-occurrence of tooth agenesis and oral clefts to gain insight into the molecular mechanisms underlying their dual involvement in the development of teeth and facial primordia. The authors concluded that not only the disrupted gene, but even the location of the mutations within the gene can lead to diverse phenotypes, ranging from the isolated form of tooth agenesis to the syndromic one for of oral clefts. In fact, genes involved in oral clefts and in the syndromic form of tooth agenesis are known as a useful approach to select candidate genes for the isolated forms of tooth agenesis (Vieira, 2003). Another important approach to select candidate genes for isolated tooth agenesis is based on the identification of the genes expressed in dental development. So far, more than 300 genes are listed in the database created to catalog genes expressed in different stages of dental development.5 Therefore, the genes were selected in our study based on their previous associations and their expression and role in dental development.

Two genetic polymorphisms (rs17563 and rs235768) selected here are missense variations located within the coding region and produce amino acid changes. The rs17563 in BMP4 studied here replaced the amino acid valine by alanine at position 152 of the protein. This genetic polymorphism has been widely investigated in oral cleft research. A recent systematic review and comprehensive meta-analysis investigated case-control studies with 2,058 oral cleft cases and 2,557 controls. In their overall analysis, no significant association between the rs17563 polymorphism and the risk of oral cleft was observed, however, their subgroup analysis demonstrated that rs17563 was associated with oral cleft risk in Chinese and Brazilian populations (Bahrami et al., 2020). The polymorphism rs17563 was also associated with isolated tooth agenesis in Brazilians and Chinese (Antunes et al., 2012; Gong et al., 2015). Although we also investigated Brazilians, the lack of association observed in our study may be explained by the fact that these previous studies excluded third molars. Although we also performed a stratified analysis excluding third molars, the sample size could lead to a false-negative result, once it is well-known that BMP4 is important for tooth development and the BMP4 expression pattern coincides with the bud-to-cap stage transition in tooth development (Saadi et al., 2013).

The other missense variant studied here was the rs235768, which is located in BMP2 resulting in an arginine to serine replacement. BMP2, another important member of the BMP family involved in regulating tooth initiation, can induce human tooth germ cells to differentiate into odontogenic and osteogenic cells (Zhang et al., 2005; Taşlı et al., 2014). In animal models, BMP2 expressed in the presumptive dental epithelium (Neubüser et al., 1997) could result in the arrest of tooth development after knockdown (Yuan et al., 2015). In fact, our study demonstrated interesting results in both studied genetic polymorphisms in BMP2. To carry the T allele increases the risk to present tooth agenesis. The haplotype and diplotype analysis also showed that rs235768 interacts with the intronic variant rs1005464 and is involved in the risk for any type of tooth agenesis, including third molar agenesis.

Runt-related transcription factor is well known to be involved in tooth development (Camilleri and McDonald, 2006). RUNX2-deficient mice show an arrest of molar tooth development at the early cap stage, suggesting that RUNX2 is required for the progression of tooth development from the cap stage to the bell stage (D’Souza et al., 1999) and therefore is a candidate for isolated tooth agenesis. In our study, some borderline association was observed for the studied genetic polymorphisms in RUNX2, suggesting that future studies should investigate the association of variations in this gene with isolated tooth agenesis in a larger population.

In conclusion, our study suggested that genetic polymorphisms in BMP2 and SMAD6 are involved in a higher chance to present isolated tooth agenesis.

The studies involving human participants were reviewed and approved by Local Ethics Committee (no. 01451418.3.0000.5419). Written informed consent to participate in this study was provided by the participants’ legal guardian/next of kin.

EK and CK conceptualize the study. EK, MM, and RS designed and organize the sample recruitment. GM-V and AS performed the sample collection. CR, GM-V, and AS-S performed the laboratory analysis. CR, AS-S, and EP analyzed the data. CR, EK, GM-V, AS-S, and CK wrote the manuscript. EK, PP, and CK funding support. All authors read and approved the final version of the manuscript.

The Supplementary Material for this article can be found online at: https://www.frontiersin.org/articles/10.3389/fphys.2021.723105/full#supplementary-material

Copyright © 2021 Küchler, Reis, Silva-Sousa, Marañón-Vásquez, Matsumoto, Sebastiani, Scariot, Paddenberg, Proff and Kirschneck. This is an open-access article distributed under the terms of the Creative Commons Attribution License (CC BY). The use, distribution or reproduction in other forums is permitted, provided the original author(s) and the copyright owner(s) are credited and that the original publication in this journal is cited, in accordance with accepted academic practice. No use, distribution or reproduction is permitted which does not comply with these terms.