Eukaryotic circular RNAs (circRNAs) emerged in a common ancestor of the land-plant Arabidopsis thaliana, the fungi Saccharomyces cerevisiae and Schizosaccharomyces pombe, and the protists Plasmodium falciparum and Dictyostelium discoideum, more than a billion years ago (Wang et al., 2014). Due to their resistance to exonucleases, these molecules are very stable, and modern-day circRNAs are capable of interacting with proteins and other RNAs (Lasda and Parker, 2014), thus regulating multiple cellular mechanisms (Qu et al., 2015) ranging from cell-cell communication (Yu and Kuo, 2019) to gene expression regulation (Garcia-Lerena et al., 2022) and, together with miRNAs and mRNAs, participating in complex regulatory networks (Cao et al., 2020).

Recently, 12 intronic (flicRNAs), and 748 exonic and exonic-intronic (circRNAs) circular RNAs have been identified in E. histolytica and E. invadens. In the human parasite, flicRNAs and circRNAs are differentially expressed between virulent (HM1-IMSS) and avirulent (Rahman) amoebic strains (Mendoza-Figueroa et al., 2018; López-Luis, 2022). In contrast, the reported E. invadens circRNAs correspond to 20 h encysting-induced cultures (López-Luis, 2022). As expected, in addition to strain- and encystment-specific circular RNAs, numerous circRNAs derived from genes of multiple functions were reported. We reasoned that the comparison of circular RNAs indicative of species-specific Sulfur metabolism with those indicative of previously acquired differentiation mechanisms, and with those indicative of more recently acquired parasitic behavior (virulence) could suggest their episodic origin (or repurposing) and their functional relationships.

circRNAs Are Shared in Different Metabolic and Differentiation Pathways

To evidence their probable origins, previously reported flicRNAs (Mendoza-Figueroa et al., 2018) and circRNAs were classified as follows. The 748 E. histolytica and E. invadens circRNAs previously identified (López-Luis, 2022) were compared to the 1997 genes with introns and annotated as Iron-Sulfur (Fe-S, marked with S) metabolism in the AmoebaDB. From this set, only 162 genes with two or more exons were considered because introns are required for circRNAs biogenesis through back-splicing (Liu and Chen, 2022). The common genes of this set with those whose circRNAs were detected in the virulent (HM1-IMSS; 174) and the avirulent (Rahman; 191) amoebic strains. Also, the aforementioned 162 genes were compared to the 33 genes whose circRNAs remained after curation of the set of genes corresponding to 20 h encystment-specific E. invadens (114 gene products). The curation process included the removal of the cognate RNAs shared with trophozoites (39 gene products remained) and the identification of their E. histolytica orthologs was carried out (thus, 33 gene products). Obviously, E. invadens-specific loci were not included.

A Venn diagram was used to relate the circRNA-producing genes that had at least one corresponding gene identified in the encystment circRNA library (Ei), in the species-specific Sulfur metabolism (S), or expressed in virulent (V) or avirulent (A) E. histolytica strains (Figure 1). Some of these genes also produce flicRNAs (*). 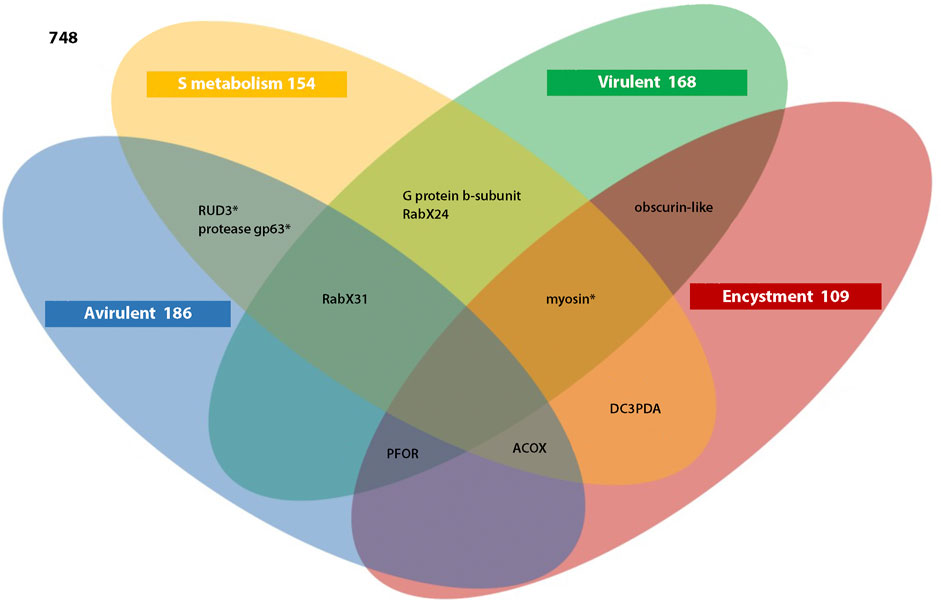 We are aware that our nested search within the available circRNAs identified a small set of molecules to relate. For this reason, our proposal should be taken cautiously. However, most of the circRNAs analyzed here are central to the metabolic/differentiation pathways discussed.

It is widely accepted that the first molecules in the origin of life were RNAs whose replication was DNA independent (Frias-Lasserre, 2012). This is additionally supported by the fact that circRNAs are found in the three domains of the tree of life (Villarreal, 2006). These molecules coevolved with their adaptor molecules and were either inherited or laterally transferred to accomplish existing biodiversity.

Assuming that during the evolution of Amoebozoa to E. histolytica speciation, encystment arose prior to S metabolism, and later virulent/avirulent traits emerged enabling the colonization of primate and reptilian hosts, we envisage two possible mechanisms of origin. On the one hand, circRNAs appeared to be shared to regulate different functions in two or more distinct biological processes. For example, S metabolism and non-virulence, or encystment, S metabolism, and virulence. On the other hand, it appears that the most recent functional acquisition of circRNAs involved the modification or repurposing of molecules that already regulated pathways involved in distinct biological roles.

Together, S metabolism and encystment circRNAs are species-specific molecules, possibly with regulatory functions. Since the metabolites that result from sulfate activation can be used during the encystment (Mi-ichi et al., 2009; Mi-ichi et al., 2011; Mi-ichi et al., 2015; Mi-Ichi and Yoshida, 2019), it is expected that the regulation of these two processes could be tightly linked, requiring more gene expression controls exerted in more biochemical pathways. Interestingly, some of these circRNAs are also used in more recently acquired mechanisms employed in host colonization, suggesting that to achieve host invasion, gene re- or multi-purposing might have been the preferred evolutionary routes. A simpler scenario to explain this would be that the sole activity of the proteins and gene expression regulators involved in S-Ei could suffice to successfully colonize a host, however, the fact that fewer circRNAs are shared differentially in V and A can be interpreted as a refinement of pre-existing mechanisms to regulate virulent and avirulent traits of the parasites. Definitely, there are much more genes and functions involved in the regulation of these traits than solely attributing the whole cause to 10 ncRNAs. For instance, all of these genes are present in the nonvirulent human commensal E. dispar however, in the also nonvirulent E. moshkovskii the EHI_030,890 locus has no ortholog. The circRNA produced from this locus is overexpressed in encystment and in the virulent amoeba strain. Provided that this hypothetical protein performs obscurin functions, it can be predicted that E. moshkovskii amoebas could have less efficient Ca++ storage capabilities, impaired internal membrane organization, and probably reduced capping activity as well. It will be exciting to determine the participation of this locus in amoebic virulence.

A comprehensive circRNA-silencing analysis is required to study all genes and functions regulated by the E. histolytica circRNA repertoire and to extend the search for the regulatory roles of circRNAs on amoeba transcription factors, splicing factors, and lysine and arginine methyltransferases that are involved in both nuclear and cytoplasmic functions (Medina-Gomez et al., 2021).

What molecular mechanisms might be in place to adjust particular circRNAs in the regulation of different biological processes? At the molecular level, we predict that a circRNA-miRNA-mRNA regulatory circuitry might be shared between processes, in some cases with opposite effects. For instance, the activity RabX31 circRNA involved in sulfur-metabolism could impact differentially the virulent and avirulent phenotypes. Also, the oxidative decarboxylation of pyruvate to acetyl-CoA and CO2 of PFOR is regulated by its circRNA during encystment and may have differential roles in virulence regulation. We have found evidence that virulent-specific and avirulent-specific circRNAs have complementary sites for Ehi-miRNAs and that might function as miRNA sponges (López-Luis, 2022). A possible scenario could be that an avirulent circRNA could sponge a virulent Ehi-miRNA thus blocking the inhibitory function of such Ehi-miRNA on its avirulent mRNA target; and vice versa.

In conclusion, apparently during the evolution of Entamoeba existing circRNAs might have been repurposed to regulate diverse cellular functions.

Copyright © 2022 González-Blanco, Jáuregui-Wade, Ruiz-Luis, Saito-Nakano and Valdés. This is an open-access article distributed under the terms of the Creative Commons Attribution License (CC BY). The use, distribution or reproduction in other forums is permitted, provided the original author(s) and the copyright owner(s) are credited and that the original publication in this journal is cited, in accordance with accepted academic practice. No use, distribution or reproduction is permitted which does not comply with these terms.