Influence of Cereal Rye Management on Weed Control in Soybean

Cover crops provide a number of ecological services, or benefits. These benefits include reducing erosion, preventing nutrient loss, providing pollinator habitat, fixing atmospheric nitrogen, and increasing soil microbial densities. In the Chesapeake Bay Watershed, adoption of cover crops for nutrient management has been very successful. Most cover crops are planted under cost-share programs that specify deadlines for fall planting dates, but allow termination in early spring. As a result, many cover crop fields receive a non-selective herbicide application in the spring prior to the rapid growth phase of most winter-hardy cover crops, which leads to very little cover crop residue present at planting.

Cover crops terminated later in the spring, provide weed suppression through direct plant-to-plant competition and/or as a physical barrier. Prior to cover crop termination, cover crops compete with weeds for resources required for growth (nutrients, moisture, sunlight) and typically cover crop species that gain a height advantage or rapidly shade the soil surface are the most competitive. These interactions occur between fall-seeded cover crops and winter annual weeds and weed species that germinate early spring before the cover crop is terminated.

Studies have documented lower weed densities and shorter weeds in the presence of cover crops (Montgomery et al., 2018; Wallace et al., 2019; DeSimini et al., in press). As a result, emerged weeds are susceptible to postemergence herbicides over a longer time period due to delayed emergence and slower growth.

Studies examining termination timing have shown that allowing an additional 2 wk of cover crop growth during the rapid stem elongation phase can result in a substantial increase in cover crop biomass (Mirsky et al., 2011; Cornelius and Bradley, 2017a; Whalen et al., 2020). However, there are few published studies examining late-spring termination on both winter annual and summer annual weeds.

This study was conducted over three soybean (Glycine max [L.] Merr.) growing seasons beginning in 2015 at the University of Delaware's Carvel Research and Education Center located near Georgetown, DE (38.64°N, 75.46°W). In 2015 and 2017, the soil was a Pepperbox loamy sand (loamy, mixed, mesic Aquic Arenic Paleudults) and in 2016 the soil was a Rosedale loamy sand (loamy, siliceous, mesic Arenic Hapludults). Soil texture was either loamy sand or sandy loam with 1.5–2.5% organic matter and pH ranging from 4.8 to 6.5 (Table 1). 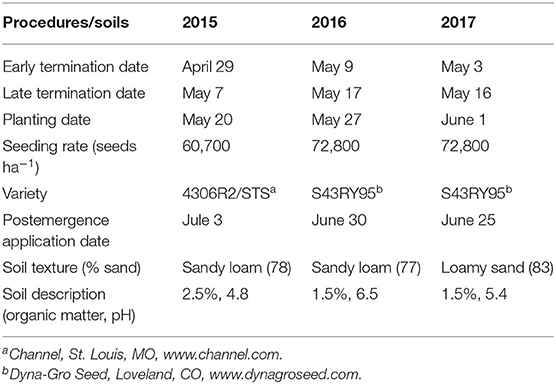 Weed control data were arcsine square-root transformed prior to analysis to address variance in homogeneity and normality, and untransformed data are presented in the tables. Statistical analyses were conducted with PROC Mixed in SAS version 9.4 (SAS Institute Inc., Cary, NC), using year and replications within year as random effect. Fisher's protected LSD was used for mean separation at P = 0.05.

Differences in cereal rye biomass were achieved through supplemental spring nitrogen and termination timing each year. Early-spring nitrogen applications resulted in a 39% increase in biomass in 2015 and 2017 (p = 0.026), and a 124% increase in 2016 (p = 0.0004) (Table 2). In 2016, rye biomass was sampled 8 WAP, which allowed for a significant amount of biomass decomposition, but it is difficult to say how much decomposition had occurred (Poffenbarger et al., 2015; Sievers and Cook, 2018). 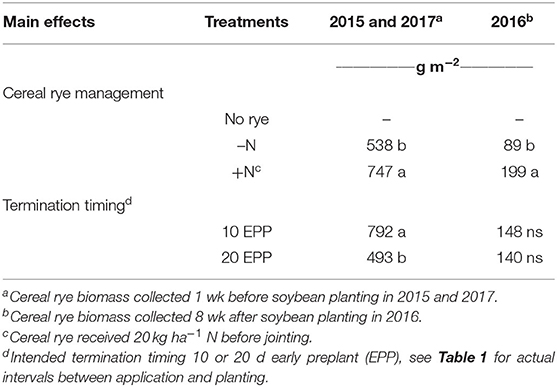 Horseweed and cutleaf eveningprimrose (Oenothera laciniata [Hill]) were the predominant species in 2016 and 2017, respectively. A multiple-resistant horseweed biotype (glyphosate- and ALS-resistant) was the dominant biotype at this site. 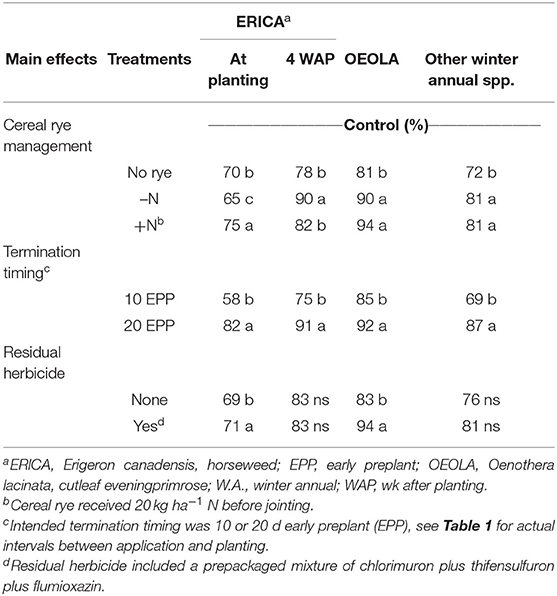 Table 3. Influence of cereal rye management, termination timing, and residual herbicide on horseweed in 2016, cutleaf eveninggprimrose in 2017, winter annual weed control in 2016 and 2017 when rated at soybean planting. 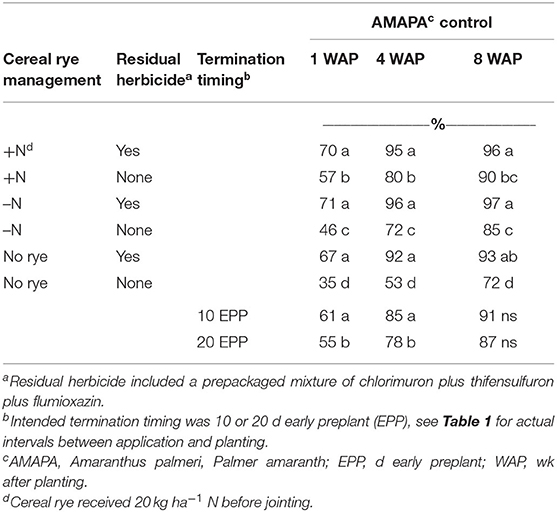 The entire study was treated with glyphosate plus fomesafen 5 WAP to assess cereal rye management, termination timing, and residual herbicides for full-season weed control. At 8 WAP, data shows similar trends to what was observed prior to the glyphosate plus fomesafen applications (Table 4). Residual herbicides treatments provided at least 93% control of Palmer amaranth, regardless of rye management (p = 0.0029). When residual herbicides were omitted, cereal rye provided 85–90% Palmer amaranth control. Furthermore, rye with N alone provided similar control as the residual herbicide treatment with no rye. This is likely due to the increased rye biomass that suppressed growth of Palmer amaranth seedlings and thus were more susceptible to the glyphosate plus fomesafen treatment applied 5 WAP. Fomesafen is a contact herbicide that works best when weeds are small and in low densities. Cereal rye resulted in fewer, smaller amaranth plants, which improved control with the postemergence herbicide application.

At 4 WAP, large crabgrass control was greater when cereal rye was present (p = 0.0003), when rye was terminated 10 d EPP (p = 0.0008), and when a residual herbicide was included (p = 0.0001) (Table 5). The greatest improvement in control was the result of including a residual herbicide at termination timing, improving control from 63 to 90%. At 8 WAP, all plots had >97% large crabgrass control due to the glyphosate plus fomesafen application.

Altering cereal rye management resulted in different levels of biomass, with cereal rye responding to nitrogen applications. Our results show that while residual herbicide treatments were very effective for summer annual weed control, cereal rye with spring N was a consistently successful weed management tactic. While residual herbicides alone provided effective control in this trial, their effectiveness is dependent on environmental factors such as rainfall and soil type. For example, a lack of rainfall or too much rainfall can reduce the efficacy of residual herbicides resulting in lower levels of weed control. In addition, chlorimuron plus thifensulfuron plus flumioxazin will provide 3–4 wk of residual control. In our study, these residual herbicides were applied at least a week before soybean planting. As a result, additional tactics of cereal rye or residual applications close to planting were needed for the highest level of control. Since the Palmer amaranth biotype in this study was glyphosate- and ALS-resistant, there was only one active effective ingredient for residual control, which is not an effective resistance-management strategy (Norsworthy et al., 2012). Including cereal rye helped reduce the selection pressure on the herbicides used in this study.

Additional N inputs or delaying cereal rye termination did improve weed control. These two approaches allowed cover crops to produce more biomass, resulting in additional mulch that hinders weed emergence and is more resistant to decay (Wagger, 1989; Mirsky et al., 2011). However, not all weed species responded consistently to the two levels of cereal rye management. No differences in winter annual weed control were observed among cereal rye treatments with and without N. Cereal rye affects winter annual weeds through inter-species competition, rather than physical suppression. The nitrogen applications were applied in mid-March and so there would have been no difference in ground cover or cereal rye biomass in the fall or early spring presumably when many of the winter annuals emerged. Furthermore, this study did not detect differences between the two levels of rye on the plant competition between winter annuals and cereal rye.

For summer annual weeds, we observed a rye management response only for Palmer amaranth control, and it occurred at all rating dates in the absence of residual herbicides. After the postemergence application, the rye with N, rye without N, and no rye biomass provided 90, 85, and 72% control, respectively. Morningglory spp. control was similar for rye without N and no rye. Only when rye received an application of N was there enough biomass production to improve morningglory spp. control at 1 and 4 WAP. Large crabgrass response was similar in the presence of rye, regardless of N application, and this control was greater than no rye. Our results imply that small-seeded species like Palmer amaranth and large crabgrass will respond to modest levels of rye biomass, but morningglory spp. need biomass levels >538 g m−2 to influence seedling growth.

The effect of termination timing differed by weed life cycles. Winter annual weed control was better when cereal rye was terminated 20 d EPP, while summer annual weed control was improved when cereal rye was terminated 10 d EPP. In this trial, we did not explore why these differences were observed. However, this provides a challenge for farmers trying to manage winter and summer annual weeds efficiently. Additional research needs to focus on minimizing the number of herbicide applications, while maintaining high levels of weed control.

While cereal rye did not eliminate the need for soil-applied herbicides, it consistently improved weed control. This research contributes to our growing knowledge of weed control with cover crops and demonstrates the effects cereal rye management can have on ecological services.

MV, BS, and QJ conceptualized, designed the study, and participated in its execution and data collection. MV and KV did the statistical analysis. KV wrote the first draft. MV, BS, and QJ edited the draft. All authors contributed to the article and approved the submitted version.

Financial support for this study was provided by the Delaware Soybean Board.

Copyright © 2020 Vollmer, VanGessel, Johnson and Scott. This is an open-access article distributed under the terms of the Creative Commons Attribution License (CC BY). The use, distribution or reproduction in other forums is permitted, provided the original author(s) and the copyright owner(s) are credited and that the original publication in this journal is cited, in accordance with accepted academic practice. No use, distribution or reproduction is permitted which does not comply with these terms.

Weed Biology and Ecology in Agroecosystems