Tracking control plays an important role in the modern industrial process and has drawn much attention both in academia and industry over these years (Yin et al., 2017). As an efficient feedforward control strategy, model predictive control (MPC) has shown its efficiency in the tracking control of multivariable systems with various constraints. Compared with other control strategies where the control law is calculated offline, the core idea of MPC is to calculate an optimal control sequence by solving a finite optimal control problem online (Mayne and Rawlings, 2001). MPC is proved to be easy for implementation and maintenance in practical industry (Hidalgo and Brosilow, 1990; Yin and Xiao, 2017). Due to these advantages, MPC has been successfully used in the tracking control of the hybrid energy storage system, modular multi-level converters, wind generation system and many other applications in recent literatures (Qin and Badgwell, 2003; Garcia-Torres et al., 2019; Guo et al., 2019; Kou et al., 2019).

Despite the successful applications of MPC, most predictive controllers rely heavily on the precision of the predictive model. For model-based MPC, the predictive model is usually generated using the first principle, i.e., the controlled auto-regressive intergraded moving average (CARIMA) model (Zhang et al., 2018). However, it is arduous to set up a precise model for modern industrial process based on the first principle due to the complicated mechanism. Some alternative predictive models, such as the time-domain model, are also hard to obtain in practice (Patwardhan et al., 1998). Fortunately, there exists a huge number of underutilized process data with the development of the measurement and storage technology. Motivated by this, the data-driven predictive controller design has attracted the interest of researchers in recent years.

Over the past several years, fruitful achievements have been reported regarding the combination of NN and MPC. A dynamic neural network based MPC (DNN-MPC) is proposed and demonstrated to show superior control performance than the mathematical model based MPC for the industrial baker’s yeast drying process (Yuzgec et al., 2008). A self-organizing recurrent neural network (RNN) aided nonlinear MPC is proposed (Han et al., 2016), where the control performance is evaluated through a wastewater treatment process. To improve the control performance for nonlinear process, the radial basis function neural network (RBF-NN) is applied to design the model predictive controller (Yu et al., 2011). Particularly, an adaptive splitting and merging RBF-NN based MPC has recently been successfully implemented in a zinc hydrometallurgy plant. However, these NN based MPC strategies often require much computation load, which limits its extension to the online implementation for real-time control performance.

1) A data-driven predictive control strategy is proposed based on the broad learning algorithm with no prior knowledge of the system model;

2) The proposed data-driven predictive controller can be updated online based on the incremental broad learning algorithm while requiring little computation load;

Given a nonlinear process described as follows:

where Ysp is the setpoint of the process, is the prediction of the output and ΔU is the incremental value of the controller output to be calculated. λ1 and λ2 are two weights to make a trade-off between the tracking error and the cost of the control action.

As an improved neural network generated from the RVFLNN, broad learning has been proven to be an efficient algorithm for regression and classification, where it is important to extract the features from the training data. A random initialization of the features is always a popular way due to its easy computation. However, the feature extracted by random projection may suffer from unpredictability and needs guidance. To avoid this, a set of sparse features can be extracted from the training data using the sparse autoencoder (SAE) discussed in Gong et al. (2015). In this way, the alternating direction method of multipliers (ADMM) technique can be used to solve the lasso problem in the broad learning algorithm (Chen and Liu, 2018) to fine-tune the weight matrices. The details of the broad learning is given as below.

Assume that and respectively denote the collected input and output data with N samples. The ith mapped feature can then be calculated as

where ϕ(⋅) denotes the projection function, and are two random matrices.

Denote Zn ≡ [Z1, Z2, …, Zn] as the concentration of the mapped feature. Zn can then be used to generate the jth enhancement node as

where ζ(⋅) denotes the projection function, and are two random matrices.

Similarly, denote Hm ≡ [H1, H2, …, Hm] as the collection of the enhancement nodes. In this way, the global model can be represented as

It is straightforward that Wm can be calculated as

where (⋅)+ represents the moore-penrose pseudoinverse. To reduce the computation complexity, the broad learning algorithm makes use of the ridge regression theory proposed in Hoerl and Kennard (2000).

Assume that is of full column rank, we have 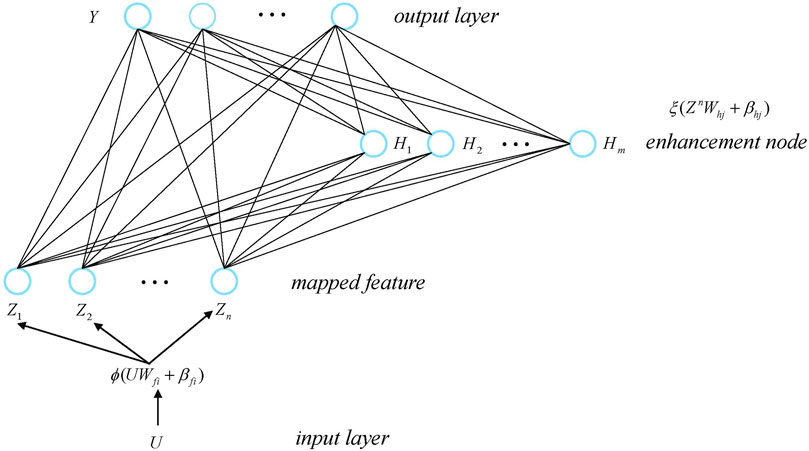 In this way, the new weights Wn+1 can be calculated as

Denote Xa and Ya as a group of new training input data and the corresponding output data. The incremental algorithm broad learning for new training data can be demonstrated as Figure 2. 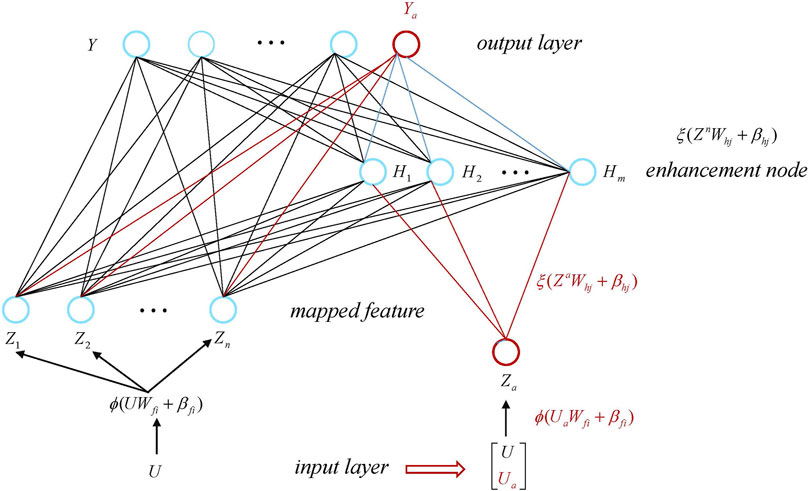 It is obvious that can be equivalently constructed as adding several rows generated by Ua to the bottom of .

Denote the input matrix generated by the new training data Ua as Au, can then be represented as

The pseudoinverse of can be calculated as

The incremental broad learning algorithm for new training data can be summarized in Algorithm 1.

For predictive control purpose, the cost function J(k) to be minimized at the kth instant can be given as follows,

Remark 2. It is worth mentioning that np should be set to be longer than the settling time in order to satisfy the convergence condition of the predictive control (Rossiter, 2003). np has no influence on the convergence of predictive control if np is greater than the settling time. However, np is often determined based on the practical experience since the settling time is unknown. In this paper, the length of the control horizon nc and prediction horizon np are both set to be 50.In the broad learning algorithm, the relationship between input training data U and output training data Y can be represented as

Therefore, regardless of the activation function, the correlation between u(k) and y(k) can be presented as

However, the activation function F(⋅) is necessary to extract the nonlinear characteristics. In the broad learning, the prediction of y(k) is calculated as

Assume that u(k) is known, G(u(k)) can then be calculated easily via the general inverse. However, the incremental ΔU is to be calculated by solving the quadratic problem as Eq. 30. Take the prediction of the y(k + 1) at the instant k as an example,

According to the definition of G(⋅) and f(net) as presented in Eqs 41, 42. It holds that f′(net) = 1 − f(net)2 ≤ 1 and G(u) is continuously differentiable for any . The Jacobian matrix JG(u) is Lipschitz continuous for . Therefore, there exists a Lipschitz constant γ such that for any

Proof. Define the deviation EG between and G(u(k + 1)) as

According to the mean value theorem, we have

Consider the equivalence of Riemann sum and integral, it yields

Consider that λ1 and λ2 are two weight constants and it holds that λ2 ≫ λ1, it yields

Remark 3. The Lipschitz constant γ is related to the spectral radius of W. In practice, Δu is often constrained due to the mechanical structure of the actuators. The deviation EG can be acceptable with an appropriate W.Denote W as

The Jacobian matrix JG(u(k)) can be constructed as

where ∘ denotes the Hadamard product and

Substituting Eqs 57, 59 into Eq. 30, the cost function can be rewritten as

subject to the same constraint as Eq. 5, where E(k) = Ysp(k) − Y(k). The proposed predictive control is illustrated in Figure 3.

In this section, the proposed predictive control is applied to tune the temperature in the continuous stirred tank heater (CSTH) benchmark. The performance of the proposed control strategy is compared with the partial form dynamic linearization aided model free control (PFDL-MFC) strategy proposed in Hou and Jin (2013) and Hou and Jin (2011). The PFDL-MFC algorithm is chosen for comparison because both algorithms need little prior knowledge of the system model and calculate the optimal control input sequence based on Eq. 4.

The continuous stirred tank heater (CSTH) is a typical pilot plant for control performance evaluation and process monitoring. The experimental CSTH system is developed in the Automation Laboratory at Department of Chemical Engineering, IIT Bombay as shown in Figure 4 (Thornhill et al., 2008). It mainly consists of two separated water storage tanks. The water is heated separately and recycled between the two tanks. The CSTH benchmark can be regarded as a 5-input-3-output system. u1, u2, and u3 represent the inputs controlled by separate valves. u4 and u5 represent the outputs of two heaters. The three outputs are the water temperature T1 (Tank 1), T2 (Tank 2) and the water level h2 (Tank 2), respectively. Table 1 gives the parameters of the CSTH benchmark in steady state. 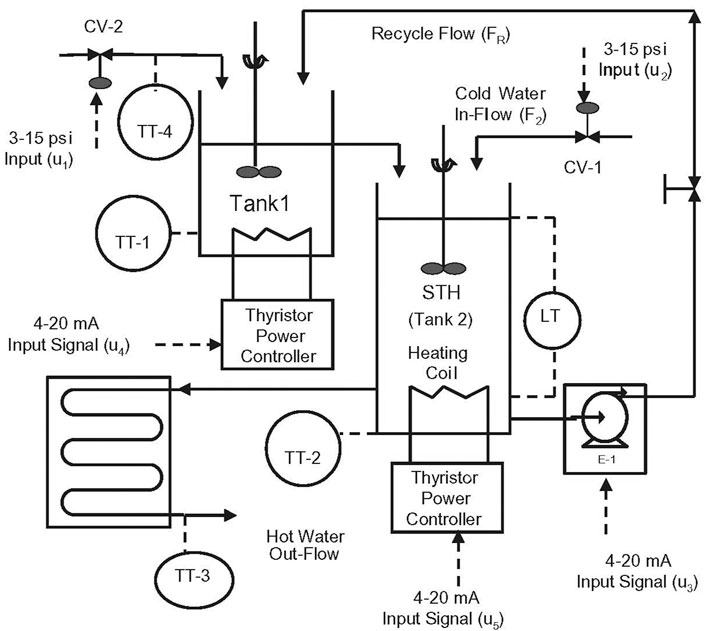 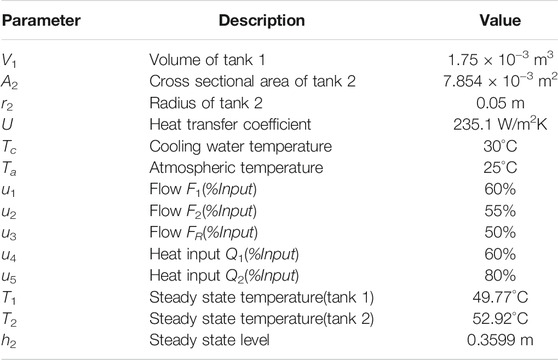 Consider that the heat input is added to the state variables in the form of polynomial functions (Thornhill et al.,2008), the controlled system is nonlinear even if the flow rate is steady. For simplicity, we only use u4 and u5 as the controller outputs to be calculated. The designed predictive controller aims to make T1 track its setpoint. If not specified, the other variables are set to be steady state in Table 1. The practical constraints in the CSTH benchmark are set to be

Define the prediction error Ep at the instant k as

Other parameters in the PF-MFPC algorithm are respectively set to be λ = 27, μ = 1, ρ = [1, 1, 1], η = 1, and L = 3. The illustrations of the designed parameters are shown in Table 2. The comparison of the prediction error is shown in Figures 5, 6, from which it can be seen that there exists a fluctuation at the 200th, 800th, and 1400th instant. The fluctuation is caused by the setpoint change. Therefore, both algorithms need to update the model dynamics based on the online process data. The comparison shows that the prediction of the proposed control strategy converges much faster than the PFDL-MFC algorithm. In addition, the fluctuation peaks of the proposed broad learning aided MPC is also much lower than the PFDL-MFC algorithm.

TABLE 2. Illustration of the designed parameters. 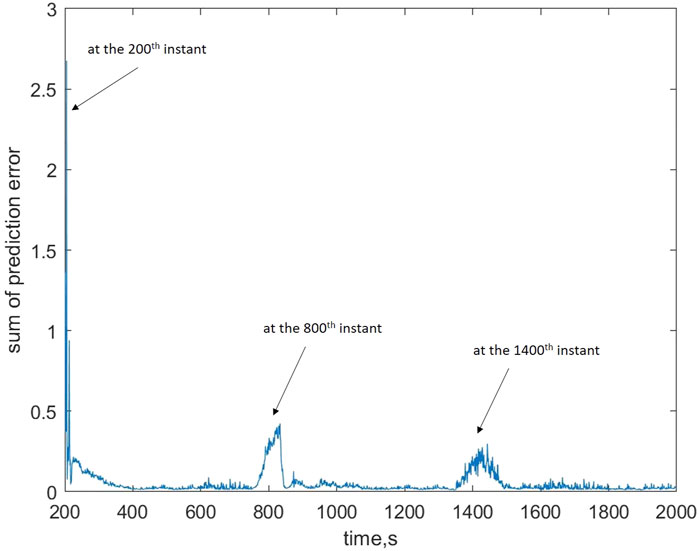 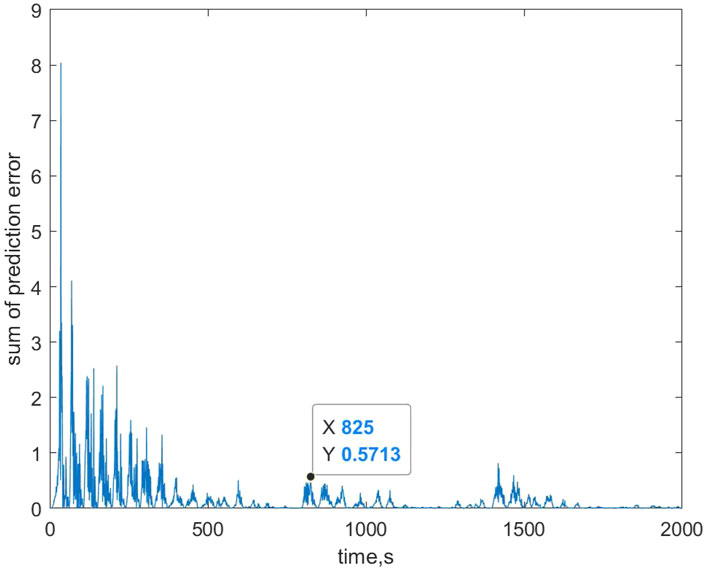 It is worth mentioning that the fluctuation of Ep occurs before the setpoint changes at the 1400th and 4800th instant since the proposed predictive controller is based on the multi-step prediction. In this simulation, it holds that nc = np = 50, which implies that the prediction of the output and the incremental of the input can be foreseen in the future 50 sample instants. 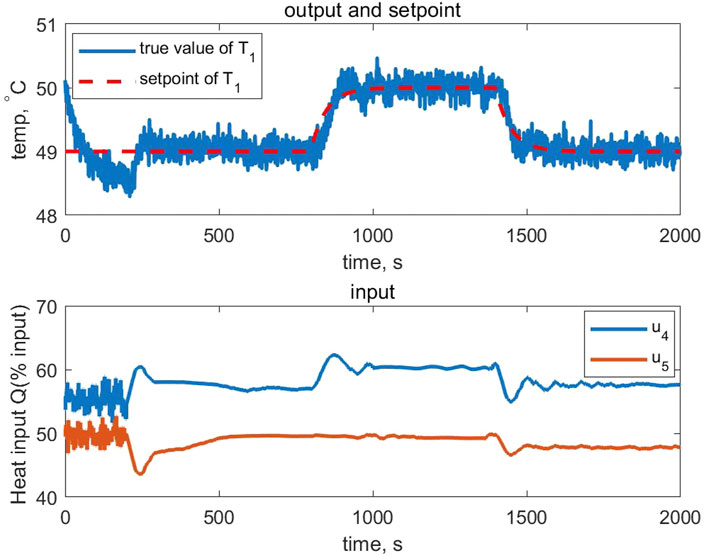 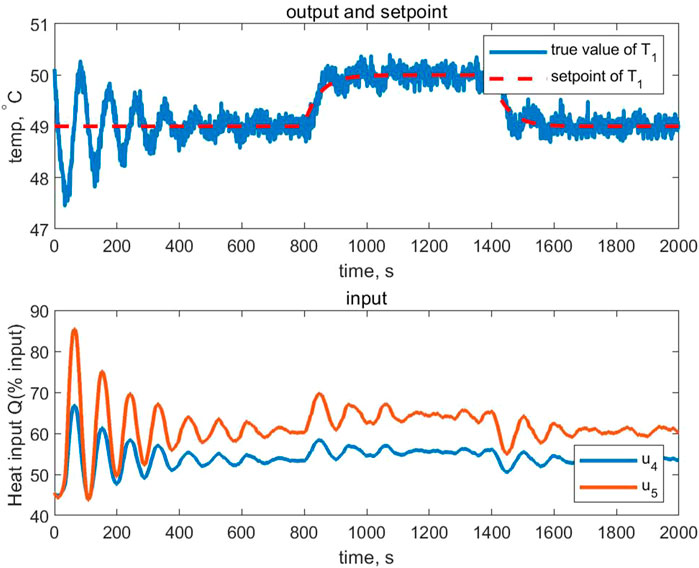 Publicly available datasets were analyzed in this study. This data can be found here: http://www.ps.ic.ac.uk/∼nina/CSTHSimulation/index.htm.

This work is funded by Open Foundation of Science and Technology on Thermal Energy and Power Laboratory under Grant TPL2018C02.

Copyright © 2021 Tao, Gao, Li and Li. This is an open-access article distributed under the terms of the Creative Commons Attribution License (CC BY). The use, distribution or reproduction in other forums is permitted, provided the original author(s) and the copyright owner(s) are credited and that the original publication in this journal is cited, in accordance with accepted academic practice. No use, distribution or reproduction is permitted which does not comply with these terms.