Background: Prader–Willi-like syndrome (PWLS) is believed to be caused by a variety of disruptions in genetic pathways both inside and outside of the genetic region implicated in PWS. By definition, PWLS does not demonstrate mutations in the 15q11–q13 region itself. It is a rare disorder whose clinical hallmarks include hypotonia, obesity, short extremities, and delayed development. This syndrome has been described in patients with 1p, 2p, 3p, 6q, and 9q chromosome abnormalities and in cases with maternal uniparental disomy of chromosome 14 and fragile X syndrome.

Case presentation: In the present report, we describe a 9-year-old Colombian patient who demonstrated features of PWS and was ultimately diagnosed with PWLS after genetic analysis revealed a 14.97 Mb deletion of 6q16.1–q21.

Conclusions: This is the first reported case of PWLS in Colombia and represents one of the largest documented 6q21 deletions.

Prader Willi-Like Syndrome (PWLS) is a rare disorder that whose clinical hallmarks include hypotonia, obesity, short extremities, and delayed development (Cheon, 2016). As its name suggests, the clinical presentation of PWLS shares features with that of the genetic imprinting disorder Prader Willi Syndrome (PWS). Despite sharing phenotypic characteristics, these diseases should be distinguished by clinicians because different treatments may be warranted for each one. Therefore, clinicians are challenged to use clinical presentation as a basis for determining best diagnostic and treatment options.

PWS is a disorder whose etiology is a lack of expression of paternal genes on chromosome 15q11-q13 (Rocha and Paiva, 2014). The three main classes of chromosomal abnormalities that result in PWS include microdeletion (65–75% of patients), uniparental disomy (20–30% of patients), and imprinting defects (1–3% of patients; Cheon, 2016). Clinical manifestations of PWS occur in two phases. The first phase is a neonatal hypotonia that often resolves by 8–11 months of life. The second phase is characterized by hyperphagia leading to obesity, small dysmorphic facial such as almond-shaped eyes or strabismus, neuropsychomotor delay, short stature, small hands and feet, developmental delay, hypopigmentation, and delayed onset of puberty (Rocha and Paiva, 2014).

PWLS is thought to be caused by a variety of disruptions in genetic pathways both inside and outside of the genetic region implicated in PWS. By definition, PWLS does not demonstrate mutations in the 15q11-q13 region itself (Berends et al., 1999).

The clinical overlap between both syndromes makes it difficult to accurately diagnose, the correct diagnosis may help to an appropriate management, but also to provide conclusive genetic explanation and accurate genetic counseling. Molecular techniques such as fluorescence in situ hybridization (FISH) or chromosomal microarray (CMA) can provide an accurate diagnosis of a chromosomal deletion indicative of PWS. The specific molecular cause of PWS can be diagnosed with the PCR-based methylation test (PBMT) to amplify 15q11-q13 (Rocha and Paiva, 2014). By contrast, a diagnosis of PWLS is made in the presence of the PWS phenotype but the absence of PWS-defining mutations in the 15q11-q13 region.

In the present report, we describe a 9 year-old Colombian boy who demonstrated the findings of PWS and was ultimately diagnosed with PWLS after genetic analysis revealed a 14.97 Mb deletion from 6q16.1-q21. This is the first reported case of PWLS in Colombia, and represents one of the largest documented 6q21 deletions.

The proband is the first child of healthy non-consanguineous Colombian parents born to 38th weeks. Pregnancy and vaginal delivery were uncomplicated with Apgar scores of 8 and 9 at 1 and 5 min, respectively. His birth weight was 3.1 kg (32nd centile) and height was 51 cm (48th centile). At birth, he was noted to have neonatal hypotony. During a follow-up visit at 3 months, psychomotor delay, strabismus and short stature were noted. He started exhibiting motor delay, achieving sitting at 12 months, crawling at 15 months and walking at 3 years. Later, his speech development was also noted to be compromised and currently he can say only one or two words. At 24 months, the patient underwent corrective surgery for strabismus. After that, at 32 months, a diagnosis of severe intellectual disability was made based on the Wechsler Intelligence Scale for Children (WISC). The results of this test showed verbal score of 46, average score of 46 and WISC full-scale IQ score of 40. The patient underwent a brain CT and metabolic testing, the results of both of which were within normal limits. Because of his short stature and signs of insulin resistance, the proband underwent a endocrinological evaluation at 9 years old, which included total serum cholesterol 248 md/dL (<170 mg/dL), glucose test pre-meal 7 mg/dL (80–130 mg/dL), triglycerides 157 mg/dL (<90 mg/dL), HDL 38.3 mg/dL (>45 mg/dL), LDL 178.3 mg/dL (<110 mg/dL), and TSH 3.38 mIU/mL (0.66–4.14 mIU/mL).

On physical exam during a follow-up visit at age 10, the following findings were observed: weight = 44.4 kg (>87th perc.; z-score 1.16), height = 1.22 m (<1st perc.; z-score −3.0), acanthosis nigricans on the nape of the neck, brachycephaly, flat occiput, synophrys, small antihelix, facial asymmetry, distended abdomen, and a redundant prepuce (Figure 1). During this visit, the parents reported that the patient ate excessively and did not sleep for an adequate amount of time. 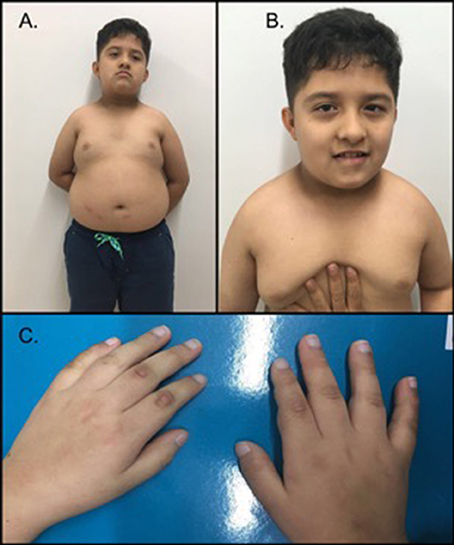 Figure 1. Phenotype of the patient. (A) The patient exhibited a short neck, brachycephaly, acanthosis nigricans on the nape of the neck, central abdominal obesity and gynecomastia. (B) Facial features demonstrated synophrys, facial asymmetry, downward slanting palpebral fissures, a broad nasal bridge and a thin upper lip. (C) Hands of the proband; note the short and thick fingers. The patient's parents provided written informed consent for the publication of his images.

The patient continues to receive physical, speech, aquatic and occupational therapies and hippotherapy, most of which were initiated at 4 months of age. In line with the parents' wishes, the patient has not been enrolled in school or received formal education. Written informed consent was obtained from patient's parents for use of his images and clinical data for scientific purposes. Data were collected in the context of studies performed in accordance with the Declaration of Helsinki Good Clinical Guidelines and protocol #509 “registry of surveillance and survival congenital defects of the Colombian South-West” approved by Ethics Committee of Universidad Icesi (Act 192/2011).

Thirty-five case reports in the literature have linked the PWLS phenotype to a 6q16 deletions(Villa et al., 1995; Le Caignec et al., 2005; Varela et al., 2006; Klein et al., 2007; Bonaglia et al., 2008; Izumi et al., 2013), which is the most common genetic abnormality in patients exhibiting the PWLS phenotype. The majority of affected patients reported in the literature (22/35) were males, as in the present case. Many of these cases reviewed by El Khattabi et al. (2015) share the following features with the present case: Developmental delay (97%), learning disabilities (97%), obesity (65%), abnormal extremities (65%), behavioral problems (61%), vision anomalies (56%), rounded face/full cheeks (55%), and skull features (53%). Of the infrequently-reported features reported by Khattabi et al. including genital anomalies (11%), sleep disorders (16%), a bulbous nose (21%), and perinatal feeding difficulties (24%), only sleep disorders were observed in the present patient. Neonatal hypotony is seen in also a rare feature in 6q21 deletions that is observed in this case (Bonaglia et al., 2008). Other infrequently-reported features in the literature, including skin picking, high pain threshold, and decreased vomiting, were not observed in the present patient (Varela et al., 2006). Clinical features of previously reported patient with PWLS and deletions 6q are summarized in Table S1.

Here, we present a patient with the PWS phenotype but with no underlying mutation in the 15q11-q13 region, which would otherwise define classic PWS. In the absence of this mutation, the patient has been diagnosed with PWLS. The genetic etiology for this patient's condition is a 14.97 Mb deletion from 6q16.1-q21. 6q16 deletion is the most common genetic abnormality in patients exhibiting the PWS-like phenotype, our case is a 6q16.1 and 1q21 deletion, one case with novo balanced translocation between chromosomes 1p22.1 and 6q16.2 were published (Holder et al., 2000), however a concomitant deletion in both region has been reported in small amount of cases (Varela et al., 2006). These genotype is exceedingly rare, having been reported in the literature in nine other cases (Villa et al., 1995; Le Caignec et al., 2005; Varela et al., 2006; Klein et al., 2007; Bonaglia et al., 2008; Izumi et al., 2013).

Recently literature suggests that obesity and PWLS syndrome have are attributable to loss-of-function variants in the single-minded 1 (SIM1) gene included in the 6q16 critical minimal region (Holder et al., 2000; Bonnefond et al., 2013; Ramachandrappa et al., 2013). SIM1 encodes a transcription factor that mediates hypothalamic paraventricular nucleus development. Loss-of-function variants in SIM1 may cause human hyperphagic obesity with or without PWS-like features, and additionally may be responsible for neurobehavioral disorders (Bonnefond et al., 2013). Thus, haploinsufficiency of the SIM1 gene could be responsible for severe obesity in cases such as the present one. Additionally, it has been suggested that GRIK2 deletions play a role in behavior disorders (Bonaglia et al., 2008). Observations have identified that the minimal critical region for PWLS is 1 Mb (Bonnefond et al., 2013). This region contains the SIM1, MCHR2, and ASCC3 genes. In addition, MCHR2 which encodes a receptor for melanin-concentrating hormones is known to increase food intake and body weight in mice. Therefore, as multiple genes with 6q16 region are important to control appetite and metabolism, a cumulative effect may cause the PW like phenotype (Spreiz et al., 2010; Rosenfeld et al., 2012; Ghoussaini et al., 2017).

Genomic imprinting or epigenetic factors might be mechanisms that mediate the variability of chromosome defects leading to PWLS. An imprinting effect in 6q16 deletions has been hypothesized based on the paternal origin of a de novo 6q16 deletion in a patient with PWLS (Faivre, 2002). It is possible that the phenotype is due to the haploinsufficiency of paternally expressed genes located in the deleted region (Spreiz et al., 2010). On the other hand, a few cases have been described with parental-origin deletion. To date, there is no strong evidence supporting an imprinting mechanism in the 6q16 region (Holder et al., 2000).

It is challenging for clinicians to make a diagnosis when confronted with patients presenting with PWLS. If genetic analysis rules out PWS, an alternative diagnosis must be sought. Clinical suspicion of PWLS should be raised in the presence of features that have been commonly described in previous cases.

All authors listed, have made substantial, direct and intellectual contribution to the work, and approved it for publication.

All of the authors are employed by and receive a salary from Universidad Icesi de Colombia.

We would like to thank the patient for their participation in this study.

The Supplementary Material for this article can be found online at: https://www.frontiersin.org/articles/10.3389/fgene.2018.00098/full#supplementary-material

Copyright © 2018 Candelo, Feinstein, Ramirez-Montaño, Gomez and Pachajoa. This is an open-access article distributed under the terms of the Creative Commons Attribution License (CC BY). The use, distribution or reproduction in other forums is permitted, provided the original author(s) and the copyright owner are credited and that the original publication in this journal is cited, in accordance with accepted academic practice. No use, distribution or reproduction is permitted which does not comply with these terms.