Here, we present the dual-platform long-read RNA sequencing dataset of two HCMV-infected fibroblast samples. We have sequenced the same RNA population that we have previously sequenced with the PacBio RS II platform (Balázs et al., 2017b), but now using the PacBio Sequel and Oxford Nanopore Technologies (ONT) MinION platforms. These data, apart from providing a more profound picture of the lytic HCMV transcriptome, can also be used to compare the current technologies. A further sample was prepared, using lytic HCMV RNAs. This sample was subjected to ONT Cap-selected cDNA sequencing (Cap-Seq) in order to allow better characterization of the transcription start sites, and also to direct (d)RNA sequencing in order to avoid reverse-transcription (RT) and PCR artifacts. We report of sequencing of approximately 100 GB raw data (Supplementary Table 1). The CapSeq by the MinION platform yielded the highest read count, the throughputs of the Sequel platform and the ONT dRNA sequencing both lagged behind (summarized in Figure 1A); both technologies nonetheless offer significant benefits. The Sequel platform is more accurate and the dRNA sequencing is free of RT and PCR artifacts. The read length distribution shows that the Sequel platform has a similar molecule-size preference to the RSII platform, while the MinION platform sequences more short reads (Figure 1B). The length-distribution of the non-cap selected cDNA sequencing reads are different from the other ONT reads, because this library was size-selected (>500 nt). 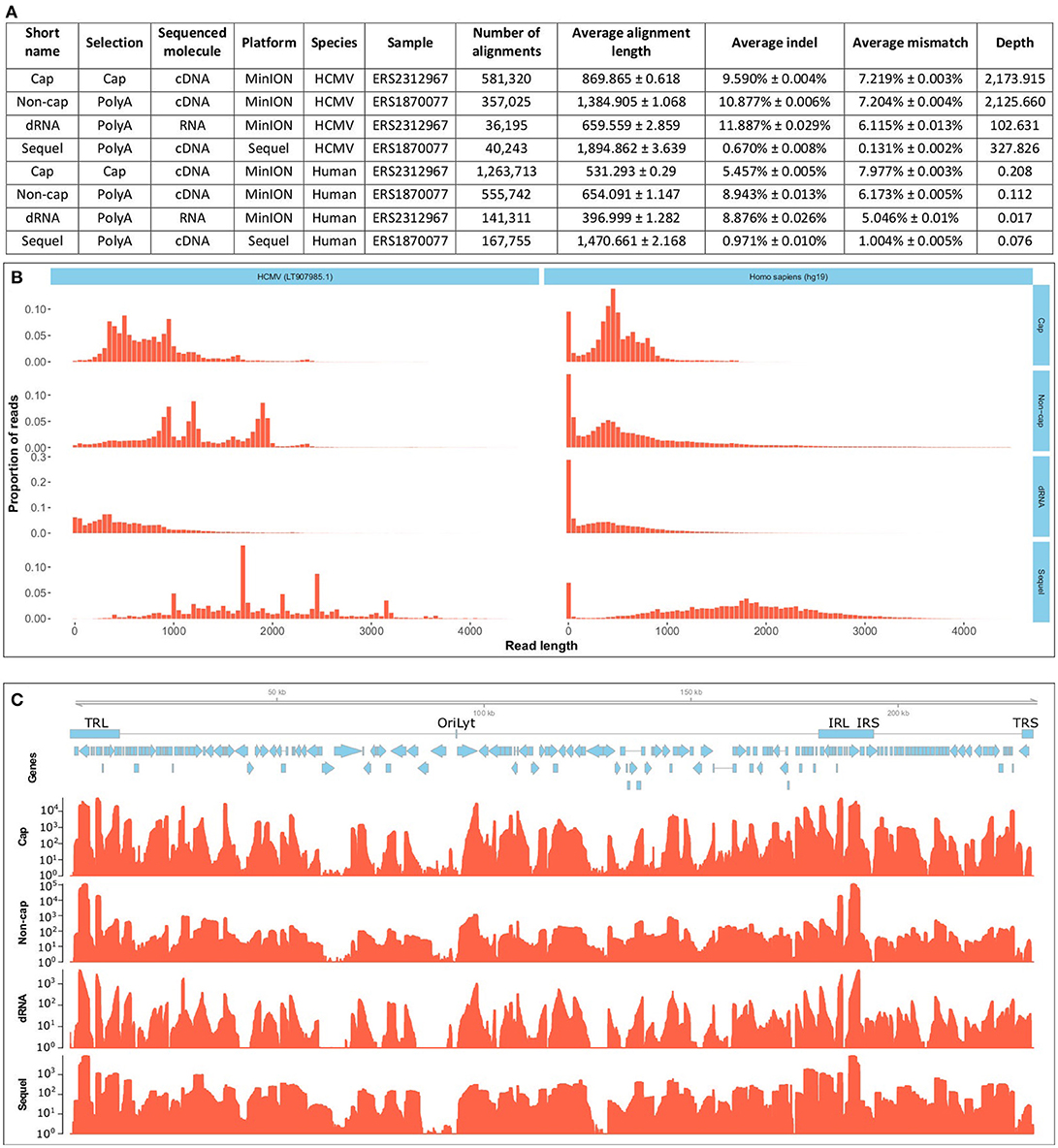 Each experiment shows a different coverage pattern along the HCMV genome (Figure 1C), which can be partly attributed to (1) whether or not cap-selection was applied, (2) whether or not the sample was reverse transcribed and amplified, (3) the length-preference of the platform, and (4) to the variance between the samples.

Two independent biological samples (with Biosample accession numbers ERS1870077 and ERS2312967) were used in this study. The layout of the experiments has been summarized in Figure 2. 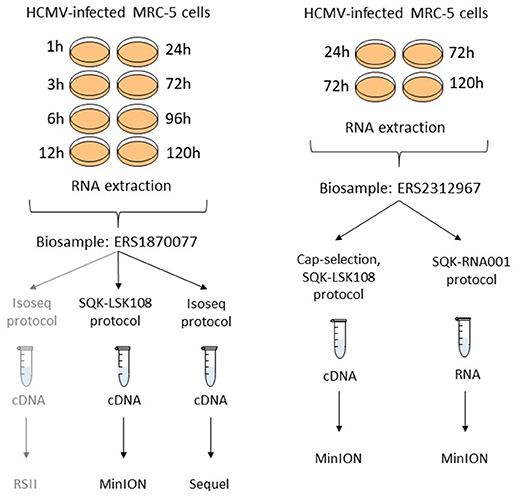 Four T75 cell culture flasks (Thermo Fischer) of human lung fibroblast cells [MRC-5; American Type Culture Collection (ATCC)] were cultured at 37°C and 5% CO2-concentration in DMEM supplemented with 10% fetal bovine serum (Gibco Invitrogen) and 100 units of potassium penicillin and 100 μg of streptomycin sulfate per 1 ml (Lonza). Rapidly-growing near-saturated cell cultures were infected with HCMV strain Towne VarS (ATCC), at a multiplicity of infection (MOI) of 0.5 plaque-forming units (pfu) per cell. The infected cells were incubated for 1 h, after which the virus suspension was removed and washed with PBS. Following the addition of fresh culture medium, the cells were incubated for 24, 72, or 120 h (in 1-2-1 flasks, respectively). Total RNA was isolated from each sample using the NucleoSpin RNA kit (Macherey-Nagel) and 20 μl of each were pooled before reverse transcription.

The same total RNA sample that had been sequenced and presented in our earlier publication (Balázs et al., 2017a) was also sequenced by Oxford Nanopore cDNA sequencing and the novel, high-throughput sequencing platform of Pacific Biosciences called Sequel. Briefly, pooled RNA sample was obtained from HCMV strain Towne VarS (ATCC) infected MRC-5 (ATCC) cells, that were grown under the same conditions as mentioned above. The infection was carried out at a MOI of 0.05 pfu per cell. Total RNA was isolated from infected cells at 1, 3, 6, 12, 24, 72, 96, 120 h post-infection (p.i.).

The Oligotex mRNA Mini Kit (Qiagen) was used to select polyadenylated RNAs from both samples. Four different, poly(A)-selected libraries were prepared in order to better characterize the HCMV transcriptome.

Direct RNA Library for Sequencing on the ONT Platform

Non Cap-Selected cDNA Library for Sequencing on the ONT Platform

cDNA Library for Sequencing on the Sequel Platforms

2 milligrams polyA(+) RNA from biosample ERS1870077 was reverse transcribed using SuperScript IV (Thermo Fischer Scientific) and anchored oligod(T) primers, following the PacBio Iso-Seq protocol. The cDNA was amplified using the Clontech SMARTer PCR. The cDNA sample was not fractionated according to size. The library was prepared with the SMRTbell DNA Template Prep Kit 2.0 and bound to MagBeads (MagBead Kit v2) for sequencing using the P6-C4 chemistry.

Cap-Selected cDNA Library for Sequencing on the ONT Platform

All three libraries were sequenced on R9.4 SpotON Flow Cells with a MinION DNA/RNA sequencing device. The sequencing runs were carried out using MinKNOW. Voltage levels were set and reset in line with the suppliers' recommendations. Base calling was performed using Albacore v1.2.6.

The prepared library was sequenced on a single SMRT cell using the Sequel system. The length of the run was 10 h. Consensus sequences were generated using SMRT-Link v5.0.1 (Potter, 2016).

All sequencing reads were aligned to both the human genome (hg19 build) and the HCMV strain Towne VarS genome (LT907985.1) using GMAP (Wu and Watanabe, 2005). The mapped reads have not been trimmed and may therefore contain terminal poly(A) sequences or 5′ adapter sequences (AGAGTACATGGG in case of the Sequel, TGGATTGATATGTAATACGACTCACTATAG in the case of the CapSeq and TGCCATTACGGCCGGG in case of the not cap-selected cDNA sequencing). These sequences are usually soft clipped and can be used to determine read strandedness. Direct RNA sequencing reads do not contain 5′ adapters; read directions are determined by the sequencer as RNA molecules enter the nanopores with the polyA-tail first. Read statistics were calculated using custom scripts (doi: 10.5281/zenodo.1034511). The data metrics were visualized using the ggplot2 (Wickham, 2016) and the Bioconductor (Hahne and Ivanek, 2016) R packages.

The quantification of RNA and cDNA fractions was carried out using a Qubit (Life Technologies) fluorometer. In the case of the library preparation for the Sequel sequencing optimal conditions for primer annealing and polymerase binding were determined using PacBio's Binding Calculator in RS Remote. An Agilent 2100 Bioanalyzer (Agilent High Sensitivity DNA Kit) was used to measure the library sizes. The used samples had RNA Integrity Numbers greater than 9.5. In order to confirm that the sequenced virus is VarS from strain Towne, we have carried out PCR with primers probing the deleted segment and with primers designed to the two flanking sequences of the deletion in VarS as described in (Balázs et al., 2017a).

The dataset contains RNA sequencing reads from various post-infection time points during the lytic infection of HCMV and can be used to detect transcript isoforms, polycistronic RNA molecules, transcriptional overlaps or transcript features such as transcriptional start sites, transcriptional end sites and splice junctions both in HCMV and in the human fibroblast cell culture. The raw data files can be used to improve base calling methods. The raw PacBio single-molecule real time sequencing data contains information about the polymerase kinetics, stored as IPD values. Raw reads are supplied in the company-standard raw data formats: unmapped bam files for the Sequel data and fast5 files for the nanopore data. Mapped binary alignment (bam) files from each of the raw datasets have also been uploaded to facilitate re-use. These files can be analyzed for example using samtools (Li et al., 2009), bedtools (Quinlan and Hall, 2010), or the Genome Analysis Toolkit (Van der Auwera et al., 2013). The dataset can be used to detect structural or single nucleotide variation or to test detection tools. The data generated with different platforms can be compared to analyze the differences in the performance of the platforms or to screen for platform-specific errors. The dataset on the native RNA sequencing can also be used to investigate epitranscriptomic modifications.

Raw and mapped data files have been uploaded to the European Nucleotide Archive under the accession number PRJEB25680 (https://www.ebi.ac.uk/ena/data/view/PRJEB25680). All data can be used without restrictions.

DT carried out the experiments. ZBa and AS processed and analyzed the data. MS and ZBo conceived and supervised the project. ZBa and ZBo wrote the manuscript.

This study was supported by NKFIH OTKA K 128247 and Swiss-Hungarian Cooperation Programme [SH/7/2/8] to ZBo. The work was also supported by the Bolyai János Scholarship of the Hungarian Academy of Sciences awarded to DT, by the Nation's Talents Programme [NTP-NFTÖ-17B] scholarship of the Hungarian Ministry of Human Capacities awarded to ZBa and by the NIH Centers of Excellence in Genomic Science (CEGS) Center for Personal Dynamic Regulomes [5P50HG00773502] awarded to MS.

We express our gratitude to Marianna Ábrahám (University of Szeged) for the technical assistance.

The Supplementary Material for this article can be found online at: https://www.frontiersin.org/articles/10.3389/fgene.2018.00432/full#supplementary-material

Copyright © 2018 Balázs, Tombácz, Szűcs, Snyder and Boldogkői. This is an open-access article distributed under the terms of the Creative Commons Attribution License (CC BY). The use, distribution or reproduction in other forums is permitted, provided the original author(s) and the copyright owner(s) are credited and that the original publication in this journal is cited, in accordance with accepted academic practice. No use, distribution or reproduction is permitted which does not comply with these terms.