FeatSNP is an online tool and a curated database for exploring 81 million common SNPs’ potential functional impact on the human brain. FeatSNP uses the brain transcriptomes of the human population to improve functional annotation of human SNPs by integrating transcription factor binding prediction, public eQTL information, and brain specific epigenetic landscape, as well as information of Topologically Associating Domains (TADs). FeatSNP supports both single and batched SNP searching, and its interactive user interface enables users to explore the functional annotations and generate publication-quality visualization results. FeatSNP is freely available on the internet at FeatSNP.org with all major web browsers supported.

Genome-wide association studies (GWAS) and expression quantitative trait loci (eQTL) analyses have identified thousands of genetic variants that are associated with a wide range of human phenotypes, shedding lights on the understanding of the genetic effect to human diseases. However, a key challenge for scientists in the human genetics community is to understand the molecular mechanism connecting significant genetic variant and specific phenotype. More than 90% of SNPs associated with human phenotypes are located in non-protein-coding regions, and cannot be explained by alteration of amino acid sequence of proteins (Welter et al., 2014). Recently, mounting evidence suggests that disease-associated non-coding SNPs are highly enriched in tissue-specific regulatory elements including enhancers, which can be detected and defined by specific chromatin modifications (Carey et al., 2015; Zhou et al., 2015; Agrawal et al., 2018). Moreover, some non-coding SNPs are found to be located within transcription factor (TF) binding motifs, which affect the TF binding affinity and result in allele switching and/or allele-specific regulation of target genes (Andersson et al., 2014; Roadmap Epigenomics et al., 2015; Nelson et al., 2016). These evidences underscore the potential causal role of non-coding genetic variants in affecting human diseases and phenotypes through regulation of gene expression (Claussnitzer et al., 2015).

FeatSNP consists of a front end UI implemented with HTML/PHP/JavaScript, and a backend NoSQL database implemented with MongoDB (v3.2.7) as shown in Figure 1. The current SNP dataset contains 81,144,876 bi-allelic SNPs from dbSNP (V144), with SNP accession number as unique identifier in the database. Human dbSNP build 144 was downloaded from ftp.ncbi.nih.gov/snp, which includes 84,435,229 SNPs records, 1,591,294 insertions records, 2,595,517 deletions records, 33,234 indel records, and 110 Multiple Nucleotide Polymorphisms (MNPs) records. After filtering redundant records, 81,144,876 of 84,435,229 biallelic SNPs were used to generate functional annotations and were curated by the FeatSNP database. The genome coordinates (hg19) of 81,144,876 SNPs were used to associate the SNPs with their nearest genes based on 56,642 records of GENOCDE gene annotation Release 19 (GRCh37.p13).

To predict impact of allele-specific TF binding affinity by SNPs, the Position Weight Matrix (PWM) of 519 vertebrate TFs were collected from JASPAR (Core Vertebrate 2016) (Mathelier et al., 2016). After evaluating the motif weight PWM of 519 TFs at base-pair resolution (Supplementary Figure S2), the reference and alternate alleles for every SNP with flanking 10 bp of genomic sequences both upstream and downstream were obtained from the UCSC Genome Browser. FIMO (Grant et al., 2011) was used to scan the 21 bp sequence to identify binding motifs matching any of the 519 TF PWMs, and calculate the TFBS motif scores. Only instances where a motif in the sequence (i) passed the threshold of P < 1e-2 in either the reference or the alternate allele, and (ii) contained the SNP location and (iii) the difference of motif scores between the reference and the alternate allele was greater than 2, were recorded in the database.

1,259 transcriptome datasets of 13 brain tissues generated by the GTEx consortium (Gibson, 2015) were used to calculate the Pearson correlation between each SNP associated gene and predicted binding TFs. The lowly expressed gene and TFs (expression of all samples in one tissue less than 0.2RPKM) were removed. The correlation and gene expression in 13 brain tissues were visualized by using JavaScript package Highcharts (v5.0.2).eQTL data of 10 brain tissues generated by GTEx consortium were negative-log10 transformed and further visualized by using Highcharts (v5.0.2).

The association records of SNP and human disease/traits (V1.0.2) were downloaded from GWAS Catalog. 33,894 associations with p-value smaller then 5E-8 were kept and classified based on 1,374 human disease/traits categories. The functional annotations of these 33,894 SNPs were reported on FeatSNP.org/html_file/disease_classification.html (Supplementary Figure S3).

To illustrate the use of FeatSNP, we performed the analysis using rs8070723 as an example. rs8070723 is an intronic A/G SNP (major allele A frequency 0.881, minor allele G frequency 0.119) in MAPT, the gene that encodes the microtubule-associated protein tau, and is associated with Progressive Supranuclear Palsy (Hoglinger et al., 2011) and with Parkinson’s Disease (UK Parkinson’s Disease Consortium et al., 2011). To better understand the regulatory potential of this human disease-associated SNP, we inquired the epigenetic annotation of rs8070723 in FeatSNP through Single SNP ID Searching function on SNP Query Page (Supplementary Figure S4). The database first reported the basic information of SNP rs8070723, including genomic location, allelic frequency, surrounding DNA sequence, and associated gene (Figures 2A–C). Users can further access the genetic information and associated human disease or traits of inquired SNPs on dbSNP and GWAS Catalog through external links. 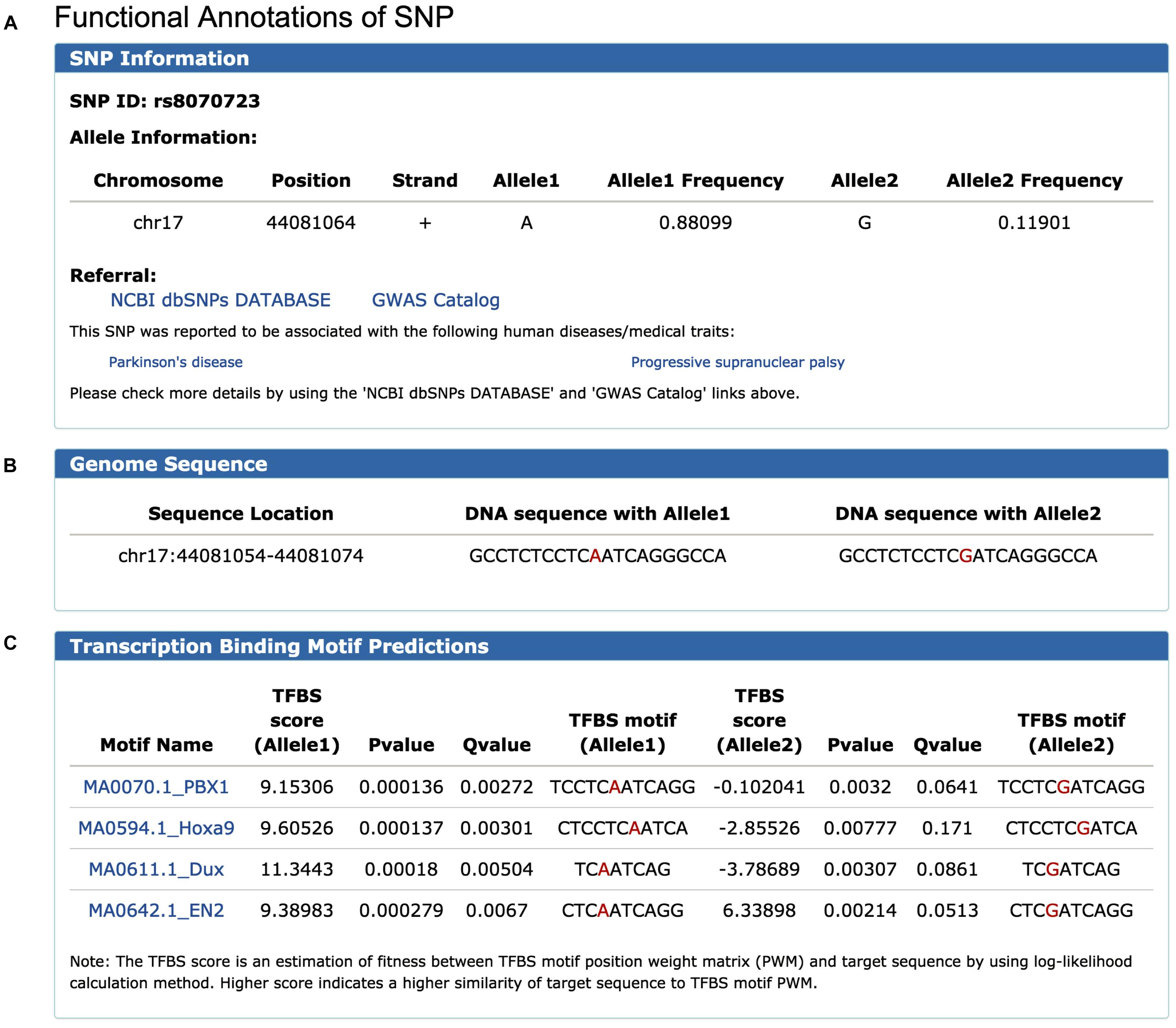 Since FeatSNP curated 1,259 transcriptome data of 13 brain tissues generated by the GTEx consortium (Gibson, 2015), we were able to further check the expression level of PBX1 and EN2 in multiple brain regions in FeatSNP database. EN2 was only expressed in the cerebellum of the brain (Supplementary Figure S1A) and did not correlate with expression level of MAPT (Figure 3A). We found that PBX1 highly expressed in different brain regions (Supplementary Figure S1B), and we also found the expression of MAPT had strong and specific correlation with PBX1 in multiple brain regions (Figure 3A), especially in anterior cingulate cortex (r = 0.808), nucleus accumbens (r = 0.768), and frontal cortex (r = 0.768) (Figure 3B), which were considered as major affected regions of Progressive Supranuclear Palsy (Salmon et al., 1997). 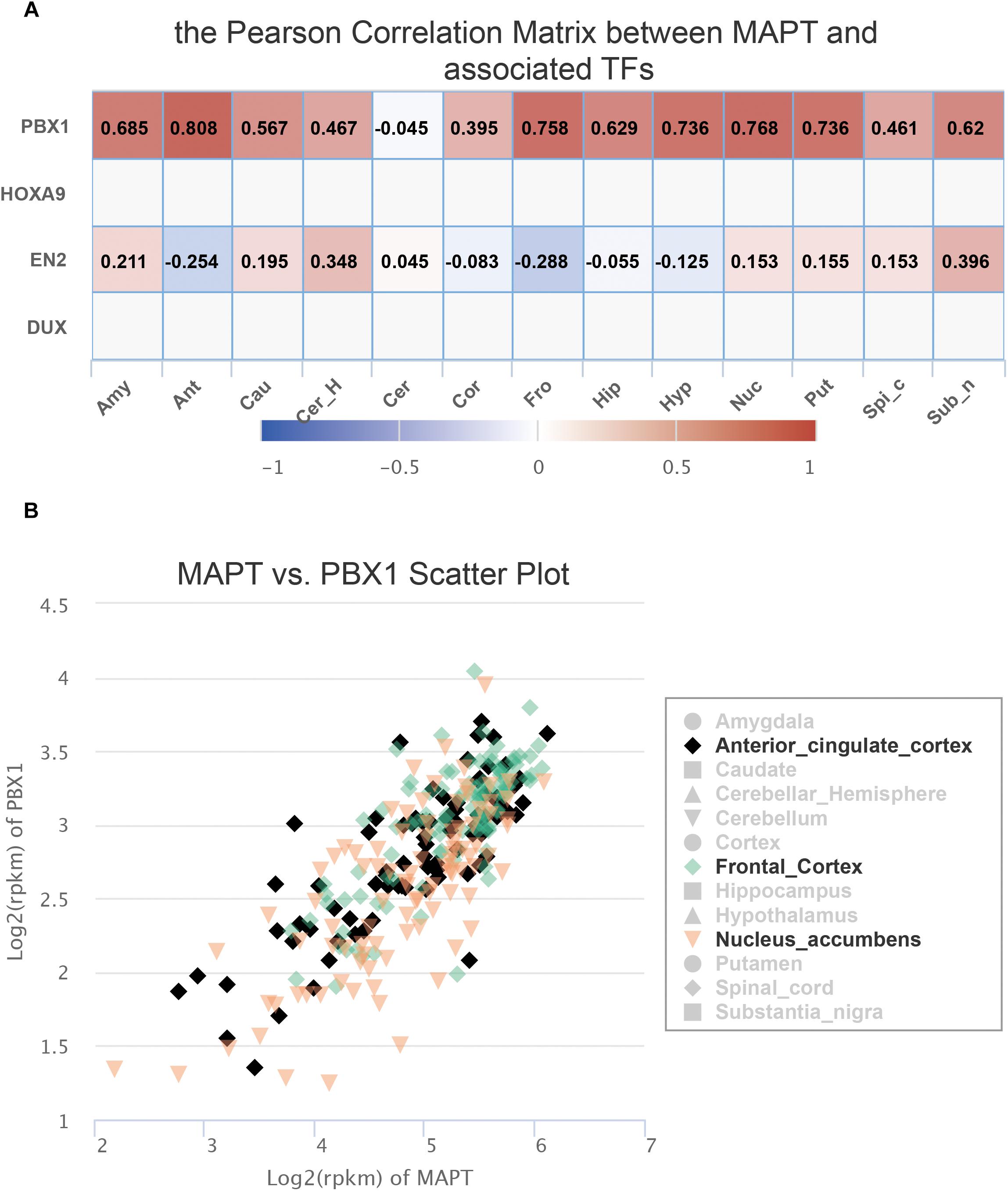 We further explored the epigenetic annotation of the genomic regions tagged by rs8070723 in 10 brain regions by using epigenome data generated from Roadmap Consortium, which were also curated in FeatSNP database. We found the regions tagged by SNP rs8070723 enriched for strong active histone modification signals including H3K4me1, H3K9ac, and H3K27ac in 8 brain tissues (Figure 4A). Such active histone modifications were generally associated with active enhancer and promoter functions. Chromatin epigenetic status prediction based on chromHMM (Ernst and Kellis, 2012) suggested that the regions tagged by SNP rs8070723 could be considered as strong enhancers (Figure 4B). Finally, we explored the eQTL data in 13 brain tissues, and found rs8070723 was associated with several genes’ expression, including MAPT (Figures 4B,C). MAPT gene mutations have been associated with several neurodegenerative disorders such as Alzheimer’s disease and Parkinson’s disease. Our result suggests that rs8070723 G allele might influence MAPT expression level by reducing the binding affinity of upstream regulatory protein PBX1, therefore providing a mechanistic association with neurodegenerative diseases including Progressive Supranuclear Palsy and Parkinson’s Disease. 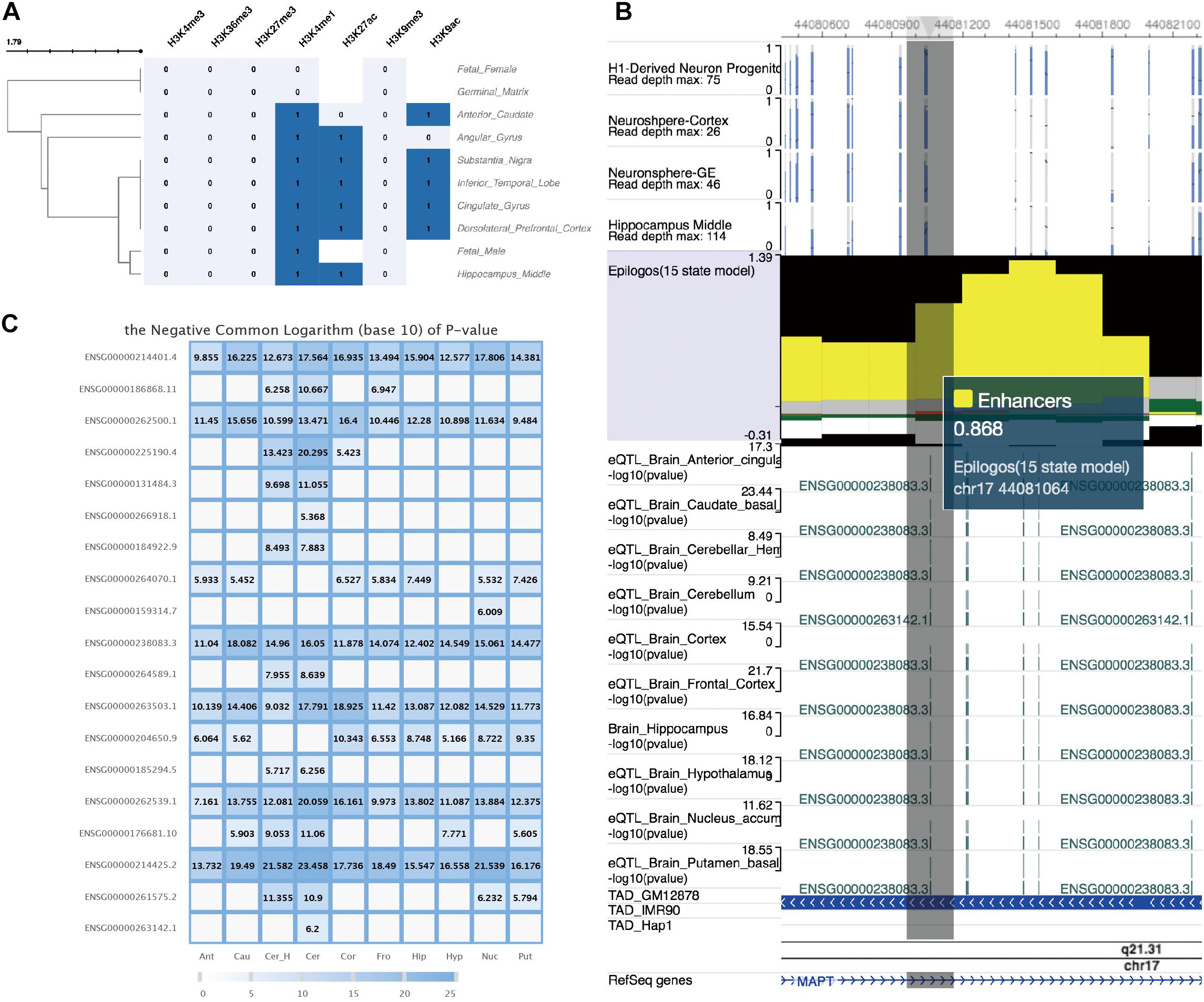 In summary, FeatSNP is an interactive database providing brain-specific functional genomics resources to investigate the regulatory potential of human SNPs. This database provides a multitude types of functional annotations, including TF binding motif prediction, epigenetic landscape, expression correlation and eQTL information. We anticipate that this database will facilitate scientists to investigate the functional impact of their candidate genetic variants in a more streamlined, rapid, and efficient fashion.

Publicly available datasets were analyzed in this study. This data can be found here: http://www.roadmapepigenomics.org/.

C-yM and BZ performed the data analysis, C-yM and PG developed the database and website. PM, TW, and BZ designed and supervised the study.

The Supplementary Material for this article can be found online at: https://www.frontiersin.org/articles/10.3389/fgene.2019.00262/full#supplementary-material

Copyright © 2019 Ma, Madden, Gontarz, Wang and Zhang. This is an open-access article distributed under the terms of the Creative Commons Attribution License (CC BY). The use, distribution or reproduction in other forums is permitted, provided the original author(s) and the copyright owner(s) are credited and that the original publication in this journal is cited, in accordance with accepted academic practice. No use, distribution or reproduction is permitted which does not comply with these terms.