Marine molluscs of the family Haliotidae, commonly referred to as abalone, are a group of benthic reef species targeted by commercial fisheries in 11 countries, forming an important global industry worth approximately US $180 million (Gordon and Cook, 2013). Many abalone fisheries have collapsed in recent decades due to overexploitation, environmental change, and disease, with a number of target species now listed as endangered or considered “species of concern” (Hauck and Sweijd, 1999; Leiva and Castilla, 2002; Gruenthal and Burton, 2005; Kashiwada and Taniguchi, 2007). The world’s largest thriving abalone fisheries persist in southern Australia which is currently home to a thriving and rapidly growing aquaculture industry making up approximately 10% of Australia’s export market. In this region, the abalone species Haliotis rubra (Figure 1A) was targeted in five states extending from Western Australia to southern New South Wales and Tasmania with a net value of US $79 million (Mundy et al., 2014). 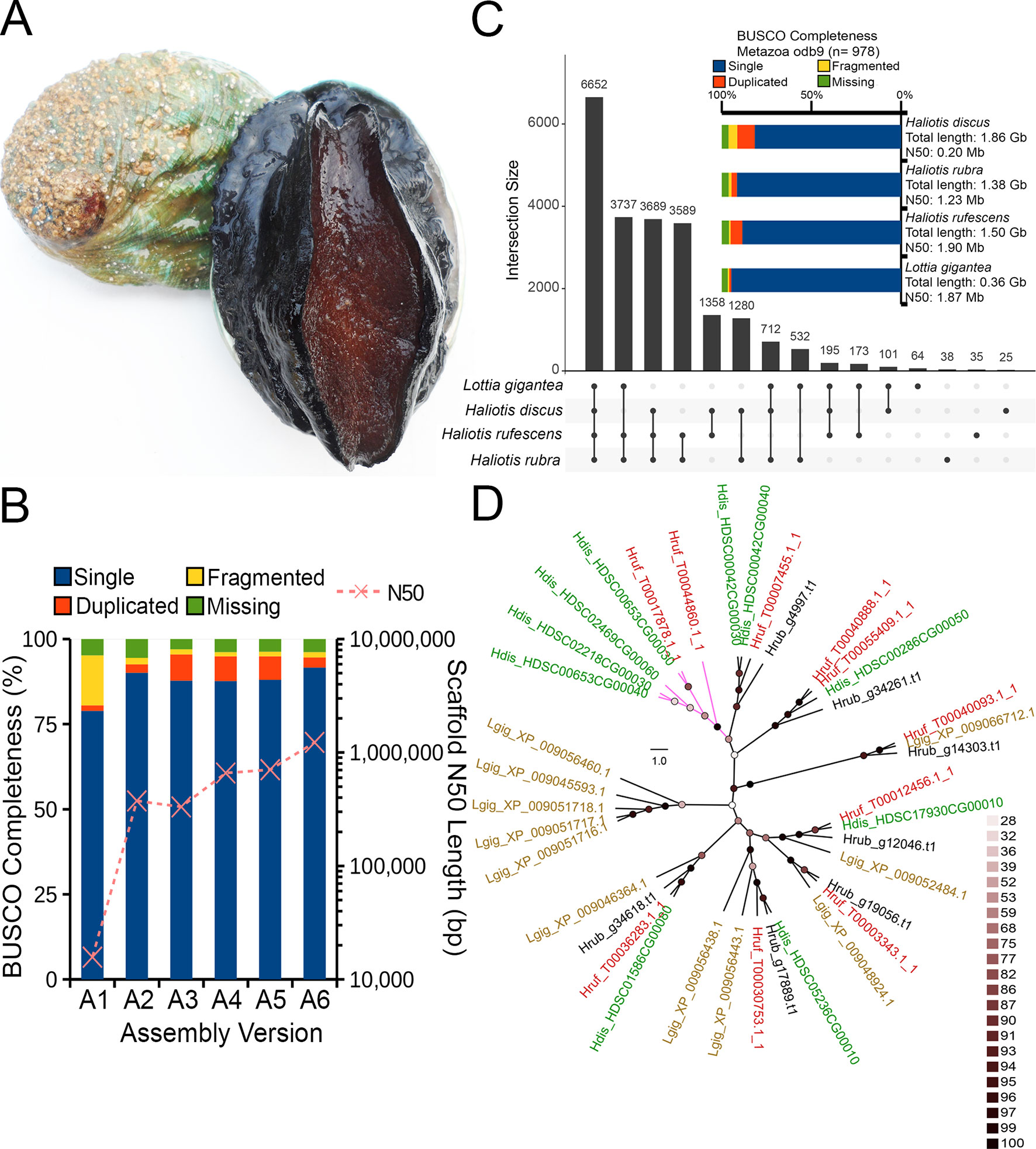 To keep up with global demand and to counter disease and environmental stress, effective management of wild stock and farmed abalone is vital to ensure maximized productivity, sustainability, and biosecurity of the industry. To date, population and quantitative genetic research have contributed genomic resources to assist H. rubra fisheries management and conservation (Baranski et al., 2008; Miller et al., 2016; Kijas et al., 2019); however, a fully assembled and annotated genome sequence for this species is still unavailable. Such a resource is needed to assist future selective breeding programs, environmental stress and adaptation research, and fundamental genomic and evolutionary studies geared toward bolstering H. rubra fisheries and aquaculture.

It was recently demonstrated that contiguous and accurate de novo assembly of metazoan genomes can be obtained with modest long read coverage (<30× coverage) by merging long-read only assembly with hybrid assembly (Chakraborty et al., 2016). However, this meta-assembly approach has not been extensively tested on heterozygous genome assemblies where a large proportion of the assemblies may fail to be merged due to the presence of independently assembled allelic contigs (haplotig) exhibiting significant structural and sequence variation (Roach et al., 2018; Formenti et al., 2019).

In this study, we generated the first Nanopore long read data (∼ 30× coverage) for the blacklip abalone (Figure 1A) and applied the hybrid meta-assembly approach to assemble its genome. Although the inclusion of long read generally improved the abalone genome contiguity and completeness, several haplotigs remain in the meta-assembly, leading to a larger assembly size and a higher representation of duplicated single-copy genes. We overcome this by performing a haplotig removal step, generating the first high-quality genome assembly for an Australian abalone. To demonstrate the utility of this resource, we annotated the genome and explored the genome for heat-shock proteins (HSPs), a highly conserved protein family whose synthesis has been previously linked to thermal stress in Haliotis species (Farcy et al., 2007; Li et al., 2012; Shiel et al., 2015).

Sample DU_JTF1, an offspring from brother/sister mating, was collected in 2017 from Jade Tiger Abalone Farm (Indented Head, Victoria, Australia) and stored frozen at −20°. Sample DU_PF1 is a captive bred specimen and was freshly sourced from Southern Ocean Mariculture (Port Fairy, Victoria, Australia) in 2018. Immediately after euthanization, its liver/gonad tissue was dissected and homogenized in DNA/RNA shield (Zymo Research, Irvine, CA).

One hundred nanograms of gDNA from DU_JTF1 was sheared to 350 bp with a Q800 sonicator (Qsonica, Newtown, CT) and processed with NEB Ultra Library Preparation Kit (NEB, Ipswich, MA) according to the manufacturer’s instructions. The library was quantified on an Agilent 4200 TapeStation (Agilent, Santa Clara, CA) and sequenced on the Novaseq6000 (Illumina, San Diego, CA) located at the Deakin Genomics Centre using the run configuration of 2×150 bp.

The integrity of total RNA extracted from DU_PF1 was assessed on an Agilent 4200 TapeStation (Agilent, Santa Clara, CA), after which, approximately 1 µg of the total RNA was processed using the Nugen Universal Plus mRNA-seq library preparation kit (NuGEN, Redwood City, CA). The 200-bp insert size library was sequenced on the same Novaseq6000 instrument as described above.

Illumina sequencing reads were processed with fastp v0.12.1 to remove low-quality bases (<Q20), as well as adapter and poly-G sequences at the 3′ end (Chen et al., 2018). Adapter-trimming and length filtering (>1,000 bp) of base called Nanopore reads used Porechop v0.2.4 (https://github.com/rrwick/Porechop), respectively. Prior to assembly, the processed Illumina reads were used to calculate kmer frequencies in Jellyfish2 v. 2.2.6 (Marçais and Kingsford, 2011). The kmer histogram for three different kmer length (k21, k25, and k31) were submitted to the Genomescope webserver for estimation of genome size, repeat content, and heterozygosity, based on a kmer-based statistical approach (Vurture et al., 2017).

Illumina reads were aligned to assembly A5 using bwa-mem v0.7.17 (Li, 2013). A read depth histogram (Supplemental Figure 1) was generated from this alignment in PurgeHaplotig v.1.0.2 to obtain the read depth cut off values required to identify haploid (redundant) contigs for subsequent reassignment or purging (Roach et al., 2018). To improve the handling of repetitive regions during haplotig purging, we also included a BED-format file containing the location of repetitive regions that was generated using Red, a machine learning-based de novo repeat detection tool (Girgis, 2015). The PurgeHaplotig-curated primary contigs representing the deduplicated primary haploid assembly was designated as assembly A6 and submitted to NCBI.

Transcriptome reads were mapped with STAR v2.7.1 to assembly A6. The transcriptome alignment in BAM format and the soft-masked assembly A6 fasta file were used as the input for Braker v.2.1.2 (Hoff et al., 2015) that fully automate the training of gene prediction tools, GeneMark-ET (Lomsadze et al., 2014) and AUGUSTUS (Stanke et al., 2006). The predicted proteins sequences from Braker2 were functionally annotated using InterProScan v5 (Jones et al., 2014). The number and length of transcripts, exons, and introns were inferred from the genome annotation gff3 file that was similarly generated by Braker2.

The InterProScan annotation of H. rubra proteins was filtered for proteins containing the InterPro domain IPR013126 (Heat shock protein 70 family). The putative H. rubra heat shock proteins and their respective orthologs from H. rufescens, H. discus hannai, and L. gigantea identified by OrthoFinder2 were submitted to the GUIDANCE2 web server (Sela et al., 2015) for the detection and removal of unreliable sequences and alignment regions. IQTree v.1.6.5 (Nguyen et al., 2014) was used to construct a maximum likelihood tree based on the GUIDANCE2 alignment output followed by visualization in FigTree v 1.4.3 (https://github.com/rambaut/figtree/).

Using the k-mer approach based on 291.7 Gb of Illumina short read data, the H. rubra haploid genome size was predicted to be between 1.24 to 1.31 Gb with moderate-high heterozygosity of 1.27 to 1.44% (Supplemental Table 2). Additional processing of the Illumina reads followed by another GenomeScope analysis with the max kmer coverage filter disabled resulted in a predicted haploid genome size of 1.56 Gb, a value closer to the 1.65 Gb haploid size estimated for a different haliotid species based on k-mer distributions (Nam et al., 2017; Masonbrink et al., 2019). Nanopore sequencing generated a total of 28 Gb (0.5-3.1 Gb per flowcell, more than 10 kb median read length) and 25 Gb data (6.8-11 Gb per flowcell, 1-2 kb median read length) for the DU_JTF1 and DU_PF1 libraries, respectively (Supplemental Table 1).

As expected, de novo assembly using only short reads resulted in a highly fragmented assembly contained in 419,307 scaffolds with an N50 of 15,704 bp. On the contrary, Nanopore long-read only assembly followed by polishing with Illumina data generated a significantly more contiguous assembly with an N50 of 374,753 bp with reduced fragmented BUSCO genes (assembly A2 in Figure 1B). A similar N50 length was observed for the DBG2OLC hybrid assembly albeit with a marked increase in the assembled genome length (Table 1) and the number of duplicated single-copy BUSCO genes (assembly A3 in Figure 1B). After the merging of assemblies A2 and A3 using QuickMerge, we observed a 200-kb increase in the N50 length and a slight decrease in assembled genome size (Table 1 and assembly A4 in Figure 1B). Another slight gain of 45.8 kb in N50 length was observed with the transcriptome-guided scaffolding (assembly A5 in Figure 1B).

Consistent with the high genome heterozygosity as estimated by GenomeScope (Supplemental Table 1), a substantial portion of assembly A5 was still represented by redundant scaffolds reflecting distinct haplotypes from the heterozygous genomic region as evidenced by the presence of a secondary peak representing allelic contigs in the read coverage frequency plot (Supplemental Figure 1). After processing with Purge Haplotigs, the final H. rubra haploid assembly was contained in 2,854 scaffolds with an N50 of 1.23 Mb. Compared with assembly A5, this represents a 75.36% decrease and 73.95% increase in the number of scaffolds and N50 length, respectively. The removal of redundant contigs also resulted in a genome assembly with lower duplicated gene content (Figure 1B).

A total of 44,137 protein-coding genes were predicted from the current genome assembly and training model, of which 24,743 were functionally annotated by InterProScan. A total of 22,180 orthologous groups were identified across the four marine gastropod genomes, of which 6,652 were core ortholog clusters, and 3,689 were exclusively shared by the currently sequenced Haliotis species (Figure 1C). Although L. gigantea is more divergent to H. rufescens and H. rubra compared with H. discus hannai, it shared 3,737 private ortholog clusters with H. rubra and H. rufescens. It is plausible that the training model used by Nam et al. (2017) may have under-predicted the protein-coding genes in the H. discus hannai genome since its BUSCO genome completeness is comparable to that of H. rufescens and H. rubra (Figure 1C).

The draft genome sequence presented in this study is the first for an Australian abalone species only the third Haliotis genome sequence to be made available in the public data repository. With less than 3,000 scaffolds and more than 90% of the genome contained in scaffolds larger than or equal to 200 kb (Table 1), this draft genome will serve as a suitable base reference for future Hi-C scaffolding and chromosomal-level genome assemblies. The substantial improvement in various assembly metrics after a quick and resource-efficient haplotig-purging step indicates that this can be an important step for generating highly contiguous hybrid assembly from heterozygous marine organisms. The annotated genome is expected to assist in future genomic breeding program by enabling the precise identification of candidate gene variants affecting ecologically and commercially important traits.

HG, AM, and CA conceived the project. HG designed the experiments. AM, CS, LM, and MG collected the specimens. YW performed RNA extraction and transcriptome sequencing. HG performed DNA extraction and whole-genome sequencing. HG, MT, and JS conducted genome analysis and assembly. HG, AM, and CA drafted the manuscript. All authors edited and contributed to the article.

MG was employed by Southern Ocean Mariculture and LM was employed by Jade Tigers Abalone. The remaining authors declare that the research was conducted in the absence of any commercial or financial relationships that could be construed as a potential conflict of interest.

This project was funded by the Deakin Research Grant Scheme 2018 awarded to HG and AM. We thank the Deakin Genomics Centre staff for support in sequencing and data processing. We also thank Julian Vreugdenburg for the provision of computational resources for data analysis.

The Supplementary Material for this article can be found online at: https://www.frontiersin.org/articles/10.3389/fgene.2019.00889/full#supplementary-material.

Copyright © 2019 Gan, Tan, Austin, Sherman, Wong, Strugnell, Gervis, McPherson and Miller. This is an open-access article distributed under the terms of the Creative Commons Attribution License (CC BY). The use, distribution or reproduction in other forums is permitted, provided the original author(s) and the copyright owner(s) are credited and that the original publication in this journal is cited, in accordance with accepted academic practice. No use, distribution or reproduction is permitted which does not comply with these terms.