Investigation of the RFC1 Repeat Expansion in a Canadian and a Brazilian Ataxia Cohort: Identification of Novel Conformations

A biallelic pentanucleotide expansion in the RFC1 gene has been reported to be a common cause of late-onset ataxia. In the general population, four different repeat conformations are observed: wild type sequence AAAAG (11 repeats) and longer expansions of either AAAAG, AAAGG or AAGGG sequences. However only the biallelic AAGGG expansions were reported to cause late-onset ataxia. In this study, we aimed to assess the prevalence and nature of RFC1 repeat expansions in three cohorts of adult-onset ataxia cases: Brazilian (n = 23) and Canadian (n = 26) cases that are negative for the presence of variants in other known ataxia-associated genes, as well as a cohort of randomly selected Canadian cases (n = 128) without regard to a genetic diagnosis. We identified the biallelic AAGGG expansion in only one Brazilian family which presented two affected siblings, and in one Canadian case. We also observed two new repeat conformations, AAGAG and AGAGG, which suggests the pentanucleotide expansion sequence has a dynamic nature. To assess the frequency of these new repeat conformations in the general population, we screened 163 healthy individuals and observed the AAGAG expansion to be more frequent in cases than in control individuals. While additional studies will be necessary to asses the pathogenic impact of biallelic genotypes that include the novel expanded conformations, their occurrence should nonetheless be examined in future studies.

Autosomal recessive cerebellar ataxias regroup a number of heterogenous neurodegenerative diseases. While each form of ataxia exhibits the key feature of cerebellar dysfunction, typically accompanied by gait and balance problems, some forms have distinct clinical characteristics such as, dysarthria, dysmetria or oculomotor abnormalities. Other neurological dysfunctions and/or non-neurologic phenotypes have also been reported in some cases. Among the different forms of recessive ataxia, Friedreich’s ataxia (FRDA) has the highest prevalence and is the most studied (Synofzik et al., 2019). In regard to prevalence FRDA is followed by autosomal recessive spastic ataxia of Charlevoix-Saguenay, ataxia with vitamin E deficiency, autosomal recessive cerebellar ataxia types 1 and 2, and ataxia with oculomotor apraxia types 1 and 2 (Noreau et al., 2013).

Cortese and colleagues established the biallelic expansion of an AAGGG pentanucleotide repeat located in the second intron of the RFC1 gene (hg19/GRCh37, chr4:39,350,045-39,350,103) to be a frequent cause of late-onset recessive ataxia; this particular expansion was reported to explain over 20% of sporadic ataxia in a cohort of Caucasian cases (Cortese et al., 2019). In the same study, a total of four distinct intronic repeat conformations were also identified: AAAAG11, the wild-type sequence, and longer expansions of AAAAGn, AAAGGn, and AAGGGn. The configuration with the AAGGG pentanucleotide was shown to be the only disease-causing conformation of the expansion, ranging in size from 600 to 2,000 repeats.

Considering that RFC1 appears to be a novel genetic risk factor that explains a significant share of adult-onset ataxia cases, the identification of carriers in other populations may altogether expand its clinical spectrum, provide examples of variable regional prevalence, and uncover repeat sequence differences. Therefore, we screened the RFC1 expansion in Canadian and Brazilian ataxia patients.

Screening of the RFC1 repeat expansion was performed on genomic DNA by repeat-primed polymerase chain reaction (RP-PCR) as described in Cortese et al. using the same set of primers (Cortese et al., 2019). RP-PCR products were separated on an ABI3730xl DNA Analyzer (Applied Biosystems®, McGill University and Genome Québec Innovation Centre) and results were visualized using GeneMapper® v.4.0 (Applied Biosystems®). The samples that seemed biallelic for the AAGGG repeat (according to the RP-PCR results) were subjected to long-range PCR [using the same primers as Cortese et al. (2019)] and Sanger sequencing. Samples for which the allelic repeat combinations could not be determined by RP-PCR were subjected as well to a long-range PCR; the product of which was purified (QIAquick gel extraction kit, Qiagen).

To examine the prevalence of RFC1-based adult-onset ataxia, we screened the nature and size of the repeat expansions in a cohort of Brazilian cases and two cohorts of Canadian cases. The RP-PCR examination of the Brazilian cohort revealed two out of 23 individuals to be carrier of biallelic AAGGG causative expansions. However, long-range PCR and Sanger sequencing subsequently revealed one of these two individuals to actually carry a biallelic AAAGG expansion; the same biallelic expansion was observed in his sister. It therefore appears that expanded AAAGG repeat expansion can sometimes mimic the AAGGG expansion when an assessment is made only by RP-PCR, under such a context the results can lead to a misinterpretation of the true nature of the repeat expansion. The use of different RP-PCR primers (Cortese et al., 2019) could not resolve this mimicry of the AAGGG repeat by the AAAGG repeat.

Across the different cohorts, two cases were observed and validated to carry the causative biallelic AAGGG repeat expansion originally reported by Cortese et al. (Cortese et al., 2019). One case with two patients were Brazilian siblings, and the other one was Canadian (Figures 1A, B respectively). Clinical features of these three patients with biallelic AAGGG expansions are summarized in Supplementary Table 1. The allele count and frequency of the different repeat expansions observed in all three cohorts are shown in Table 1. 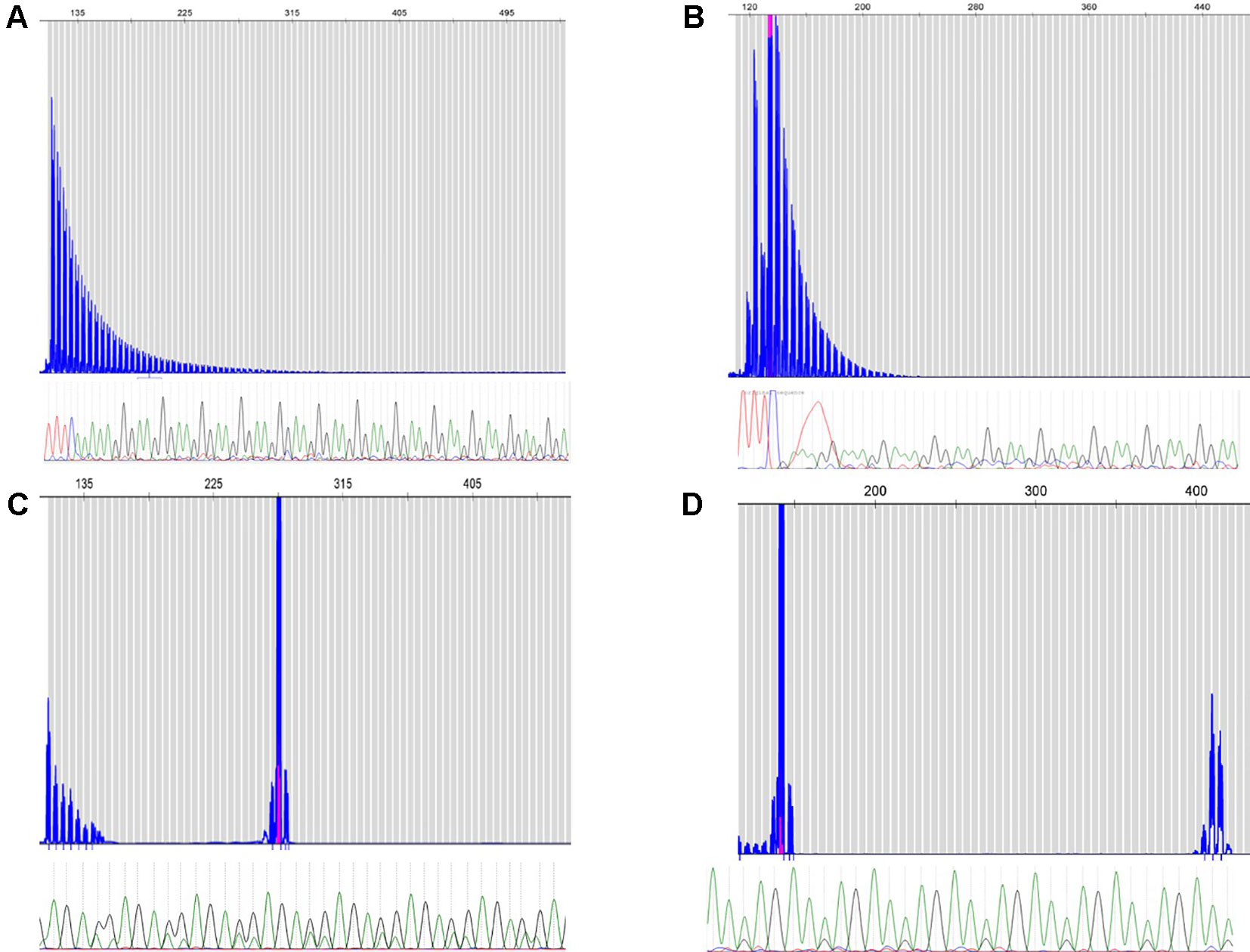 Interestingly, our cohorts of cases revealed the presence of two previously undescribed repeat expansion confirmations (AAGAG and AGAGG); both motifs were observed by long-range RP-PCR and validated by Sanger sequencing. The RP-PCR plots were characterized by a single peak, but the allele was longer than the wild type (Figures 1C, D). The novel conformations were in a heterozygous state in all 22 carrier individuals (Table 1). The average length of these novel expand configurations is 800 bp (160 repeats) ranging from 600 to 900. The approximate lengths of the repeat conformations were shown in Supplementary Figure 1.

The frequency of the expanded AAGAG and AGAGG repeat configurations was assessed in 163 Canadian control individuals showing no signs of ataxia; using a combined RP-PCR and long-range PCR approach. On the whole, a total of seven control individuals presented a heterozygous AAGAG expanded configurations. None of the control individuals tested presented an expanded AGAGG conformations. The frequency of the novel AAGAG expansion was found to be higher in cases than in controls (7.0% in cases and 2.1% in controls). The allele counts and Chi-square calculation values were shown in Supplementary Table 2. The distribution of the different conformations was found to be different in cases and controls (P = 0.022).

This study represents a follow-up examination of the RFC1 pentanucleotide repeat expansion recently found to cause adult-onset ataxia (Cortese et al., 2019). A total of 49 cases (26 Canadian and 23 Brazilian) for which genetic testing did not reveal the cause of the disease to be a previously identified ataxia gene and an unrelated cohort of 128 adult-onset Canadian cases for who no prior genetic test results was available. The nature and size of the conformation reported to be expanded in RFC1 was examined using a RP-PCR and long-range PCR sequencing approach. Conversely to what was previously observed in the original study (Cortese et al., 2019), the AAGGG expansion explained a much smaller share of the Brazilian and Canadian cases examined here (0.6% and 4.3% of unrelated cases in Canadian and Brazilian cohorts, respectively by comparison to 22% sporadic Caucasian cases in the study by Cortese and colleagues) (Cortese et al., 2019).

The frequency of the four allelic repeat configurations has been described before, but only in control individuals with no history or signs of ataxia (Cortese et al., 2019). However, the RFC1 repeat locus could not be assessed in 3% of this earlier examination in control individuals, an observation which led the authors to suggest the existence of additional allelic configurations.

Unlike the previous examinations of the pentanucleotide repeats of RFC1 in the context of adult-onset ataxia (Cortese et al., 2019; Rafehi et al., 2019), we actually report the observation of two novel repeat conformations (AAGAG and AGAGG) in a heterozygous state. The frequency of the AAGAG repeat was observed to be 0.07 and 0.02 in Canadian cases and controls respectively. The observation of two previously unreported pentanucleotide repeats might represents clues which will lead to a better understanding of the expansion mechanism leading to the pathogenic repeat of RFC1. While it is not a conclusive observation, the higher frequency of the novel AAGAG repeat in cases (by comparison to its frequency in control individuals) suggests that it could eventually be observed to also be associated with adult-onset ataxia. Hence additional work might be needed to determine the frequency of other pentanucleotide repeat conformations, and their association to adult-onset ataxia.

Given the dynamic nature of the RFC1 repeat, multiple validations of sequences and repeat length should be performed. To prevent false positive results, the RP-PCR plots should be interpreted with caution, and each AAGGG-positive sample should be validated by Sanger sequencing to confirm its true sequence.

The presence of disease-associated or wild type repeat sequences has been observed across several expansion-associated diseases, such as SCA37 (Seixas et al., 2017; Loureiro et al., 2019), SCA10 (Matsuura et al., 2006), and FRDA (Al-Mahdawi et al., 2018). Variations interrupting the pure repeat sequences of disease-causing alleles can affect their penetrance, as well as the age at onset and severity of the conditions associated with specific repeats (Al-Mahdawi et al., 2018) Also, interruptions in the normal alleles prevent the disease-associated expansions and provide the stability of repeats in disease-causing alleles. We did not observe the new sequence conformations along with an AAGGG expansion in any of the patients, therefore further studies will be required to determine whether they affect the function or the disease severity.

The low prevalence of the RFC1 AAGGG expansion, as well as the identification of novel conformations might be due to the different genetic backgrounds of the Canadian and Brazilian populations (Dupré et al., 2006). Although we screened a control group of Canadian individuals to assess the frequency of each repeat conformation in the general population, a limitation of the current study is that the study cohort do not contain a Brazilian control group. Therefore, additional case and control cohorts should be tested for the same repeat, in order to draw a clear conclusion on its frequency in adult-onset ataxia. Further studies are warranted to confirm the structure and sequence of the repeated region, and to investigate potential biological impacts.

The studies involving human participants were reviewed and approved by Research Ethic Board of the Montreal Neurological Institute and Hospital (Neuro), affiliated to the MUHC Research Ethics Board. The patients/participants provided their written informed consent to participate in this study.

We would like to thank the participants of the study. We thank S. Can Akerman, Vessela Zaharieva and Hélène Catoire, for their assistance. GAR holds a Canada Research Chair and is funded by the CIHR.

“This manuscript has been released as a pre-print at bioRxiv (Akçimen et al., 2019);

The Supplementary Material for this article can be found online at: https://www.frontiersin.org/articles/10.3389/fgene.2019.01219/full#supplementary-material

Copyright © 2019 Akçimen, Ross, Bourassa, Liao, Rochefort, Gama, Dicaire, Barsottini, Brais, Pedroso, Dion and Rouleau. This is an open-access article distributed under the terms of the Creative Commons Attribution License (CC BY). The use, distribution or reproduction in other forums is permitted, provided the original author(s) and the copyright owner(s) are credited and that the original publication in this journal is cited, in accordance with accepted academic practice. No use, distribution or reproduction is permitted which does not comply with these terms.