In the present study, a novel multiplex system, AGCU X-InDel 38 kit, was designed to amplify 38 X-InDel markers and amelogenin in a single Polymerase Chain Reaction (PCR). To demonstrate the suitability and efficiency for forensic applications, a series of validation experiments were conducted, including sensitivity, species specificity, reproducibility, stability, case samples, balance of peak height, size precision, as well as allele frequency and forensic parameter analysis. The results showed that AGCU X-InDel 38 kit was capable to get full profiles even with 62.5 pg of template DNA, and full profiles can be obtained when hematin concentration ≤25 μmol/L, or hemoglobin concentration ≤50 μmol/L, showing good tolerance to six common inhibitors. Moreover, the analyzed case samples indicated that AGCU X-InDel 38 kit had better performance for degraded and trace DNA samples. The 200 unrelated males from Guangdong Han population showed that the combined PDMale and PDFemale were both more than 0.999999999, and the combined MECKrüger, MECKishida, and MECDesmarais  Duo were 0.999369481, 0.999999917, and 0.999941556, respectively. Robust discrimination capability of this novel multiplex system could be demonstrated through the high values of forensic parameters. In conclusion, AGCU X-InDel 38 kit is sensitive, precise, reproducible, and highly informative and could be used as a complementary tool for complex and challenging kinship cases.

According to sequences from the dbSNP database, X-InDel markers were selected to meet the following criteria: (1) the difference of allelic X-InDel fragment in length, the inserted or deleted base number in other words, ranged from 1 to 25 bp; (2) all loci were located in introns; (3) the minor allele frequency (MAF) varied from 0.4 to 0.5 in East Asians; and (4) all loci comply with the Hardy–Weinberg equilibrium in the Chinese population. Finally, we got 38 optimal X-InDel markers, among which four multi-InDel markers (rs59605609, rs79829945, rs143123845, and rs35574346) with more than two alleles were involved in order to improve the discrimination power. Besides, the amelogenin gene was added for the design of a sex-confirmation marker. The information about the 38 selected X-InDel loci and amelogenin marker are shown in Table 1. 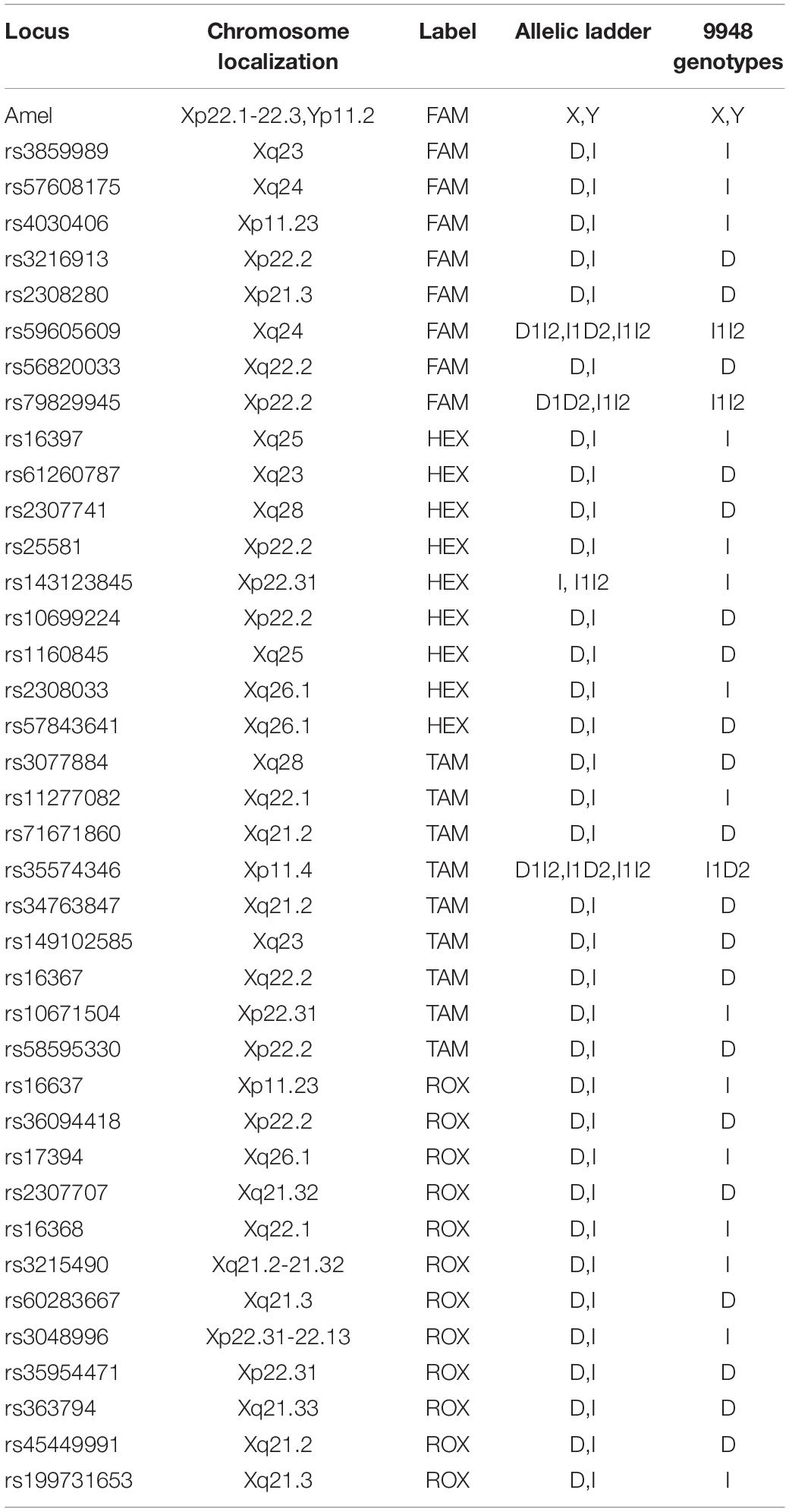 The Polymerase Chain Reaction (PCR) primers corresponding to the InDel loci and amelogenin locus were filtered and obtained using the Oligo 6.0 software (Premier Biosoft International, Palo Alto, CA, United States). All primers were chosen based on the following requirements: (1) primer pairs had similar melting temperatures (Tm) to be amplified at a similar efficiency, (2) without self-complementarity, hairpin structure, and non-specific amplification, (3) BLAST was used as an alignment algorithm to design target-specific primer sequences, and (4) SNP locations were excluded in primer sequences for a successful amplification experiment.

Amplification and Purification of the Common Alleles in the Population

Monocloning of the Target Alleles

The PCR products were cloned into pMD18-T vectors and transferred into Escherichia coli DH5α overnight in Luria-Bertani medium. Then the recombinant plasmids were screened with the method of blue-white spot screening, extracted, and sequenced subsequently. The last, the plasmids were frozen, and the cultured bacteria were stored in glycerol for further use.

Following amplification, 1 μl of amplified product was added to 10 μl of Hi-DiTM formamide and 0.3 μl of AGCU Marker SIZ-500 size standard, followed by being centrifuged for 3 min at 3,000 rpm. The mixture was denatured at 95°C for 3 min and then chilled on ice for 3 min. Subsequently, using the Applied Biosystems 3130XL Genetic Analyzer, fragments were separated with filter of E5 and polymer of POP-4 (Thermo Fisher Scientific, South San Francisco, CA, United States) by capillary electrophoresis, under the following parameters: injection at 2 kV for 10 s and electrophoresis at 15 kV for 1,500 s, 60°C. The raw CE data were genotyped by GeneMapper IDX 1.3 (Life Technologies).

Thirty samples from 200 Han population samples were used for simultaneous amplification detection and validation of genotyping results in three separate laboratories (Guangzhou Forensic Science Institute and two of its branches).

A total of 80 samples from 200 Guangdong Han population were used to analyze the balance of peak height. The ratio of the minimum RFU to the maximum RFU for different loci and the mean peak heights for each group of loci were acquired from the mean value.

To demonstrate the size precision, allelic ladder was evaluated by three separate injections on a 3130XL Genetic analyzer, followed by calculating the average fragment size and the standard deviation of each allele.

All experiments were performed according to the recommendations for the use of nomenclature and the guidelines for quality control as well as statistical analysis proposed by the SWGDAM and the International Society of Forensic Genetics (ISFG) (Schneider, 2007).

As shown in Figure 1, complete profiles were acquired when the template DNA concentration was higher than or equal to 62.5 pg. Allele dropouts were observed when template DNA inputs were further reduced to 31.25 pg. Therefore, the sensitivity of AGCU X-InDel 38 kit is 62.5 pg/10 μl.

Figure 1. The detection ratios of AGCU X-InDel 38 kit in the sensitive study in triplicate (The threshold for detection was set at 50 RFU).

The results of species specificity testing showed that no specific amplification products were observed (Supplementary Figure 1). Therefore, the genotyping results of AGCU X-InDel 38 kit were not affected by other common non-human DNA.

The results indicated that consistent allele calls were obtained consistently for all studied samples. The electropherograms of allelic ladder from three independent labs are shown in Supplementary Figure 2. 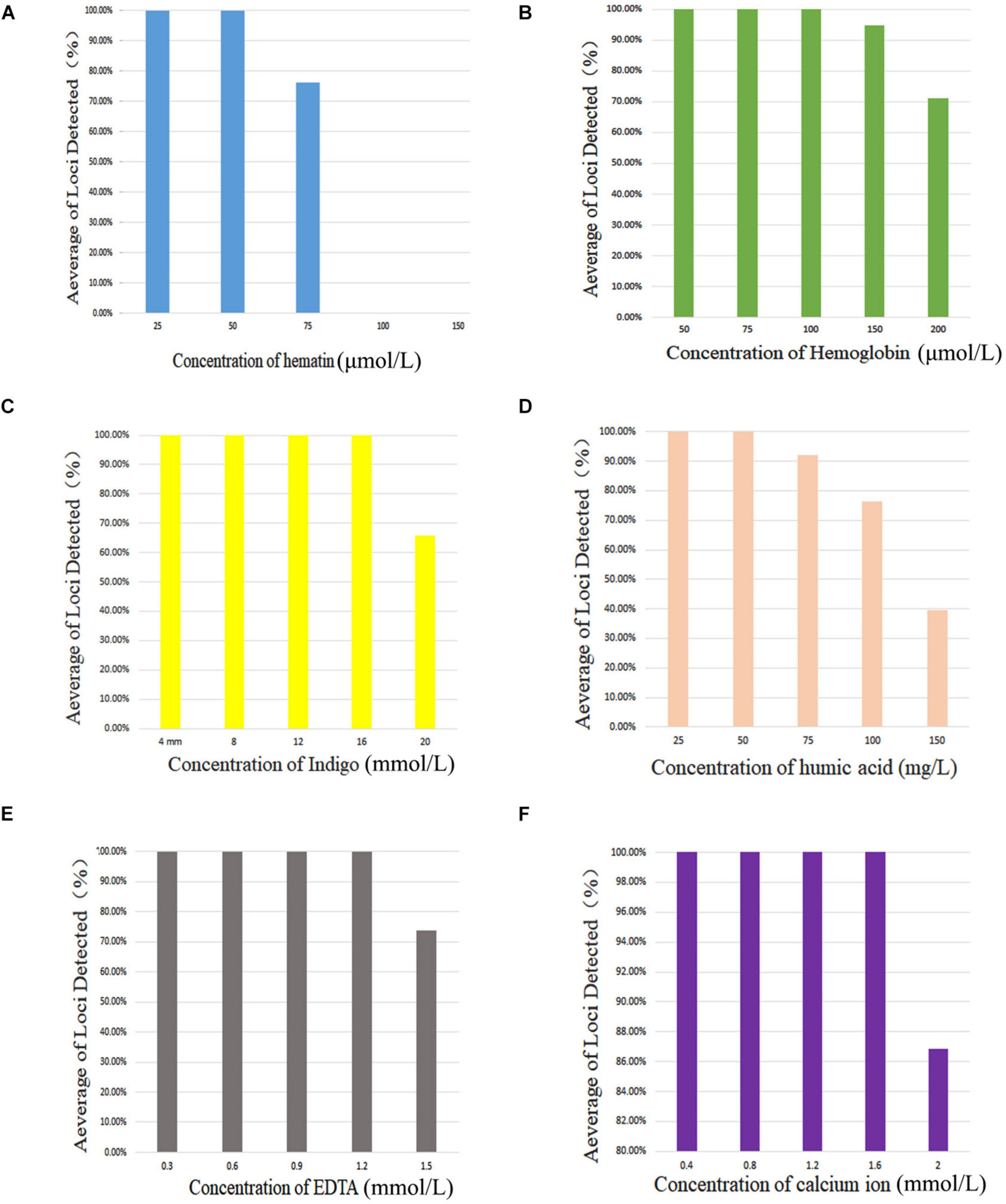 Figure 3. Size precision study of AGCU X-InDel 38 kit was performed on 3130XL Genetic Analyzer. The X-axis represents the fragment sizes of all allelic ladder samples at each locus, and the Y-axis represents the standard deviation of each allele size.

In this study, successful amplification was demonstrated with the PCR conditions of 3–10 μmol/L of primers, 3/10–8/10 of reaction mix and all concentrations of C-Taq polymerase. Occasional allele dropouts were observed at the concentrations of InDel primers <3 μmol/L and the volume fraction of reaction mix <3/10. With increasing concentrations of those reaction components, allele peak height showed a trend of increasing obviously. However, excessive component concentration like primers ≥8 μmol/L or volume fraction of reaction mix ≥6/10, may lead to the occurrence of interference signals and poor balance performance of allele peak height. Thus, the recommended optimal conditions for the AGCU X-InDel 38 kit were 5 μmol/L, 5/10, and 0.3 μl in the same order above (Supplementary Figure 4).

After testing the annealing temperatures of 55.9, 56.5, 57.2, 57.9, 58.5, 59.2, 59.9, and 60.5°C, complete profiles were well observed for replicates. When the temperature dropped below 56.5°C, a marked non-specific peak was observed with an amplicon size of 258 bp. Moreover, the efficiency of amplification for partly tested loci was markedly affected by the increase in the temperature (≥59.2°C). In that case, the peak heights turned badly balanced, and rs56820033 showed an allelic dropout at 60.5°C. On consideration of perfect profiles and appropriate balance of peak height, 58.5°C was recommended to be the optimal annealing temperature. The electropherogram of control DNA 9948 amplified using AGCU X-InDel 38 kit at 58.5°C is displayed in Figure 4. 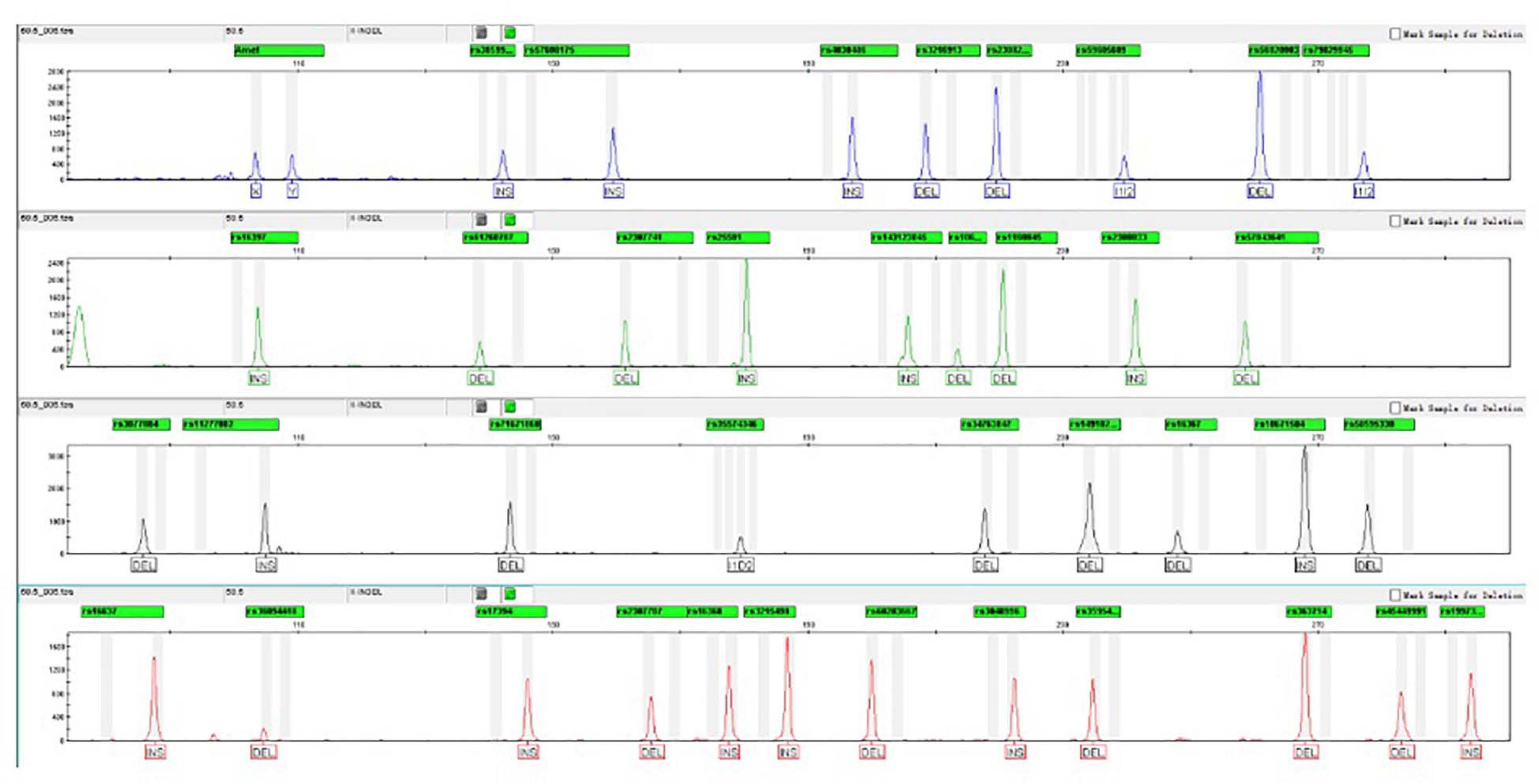 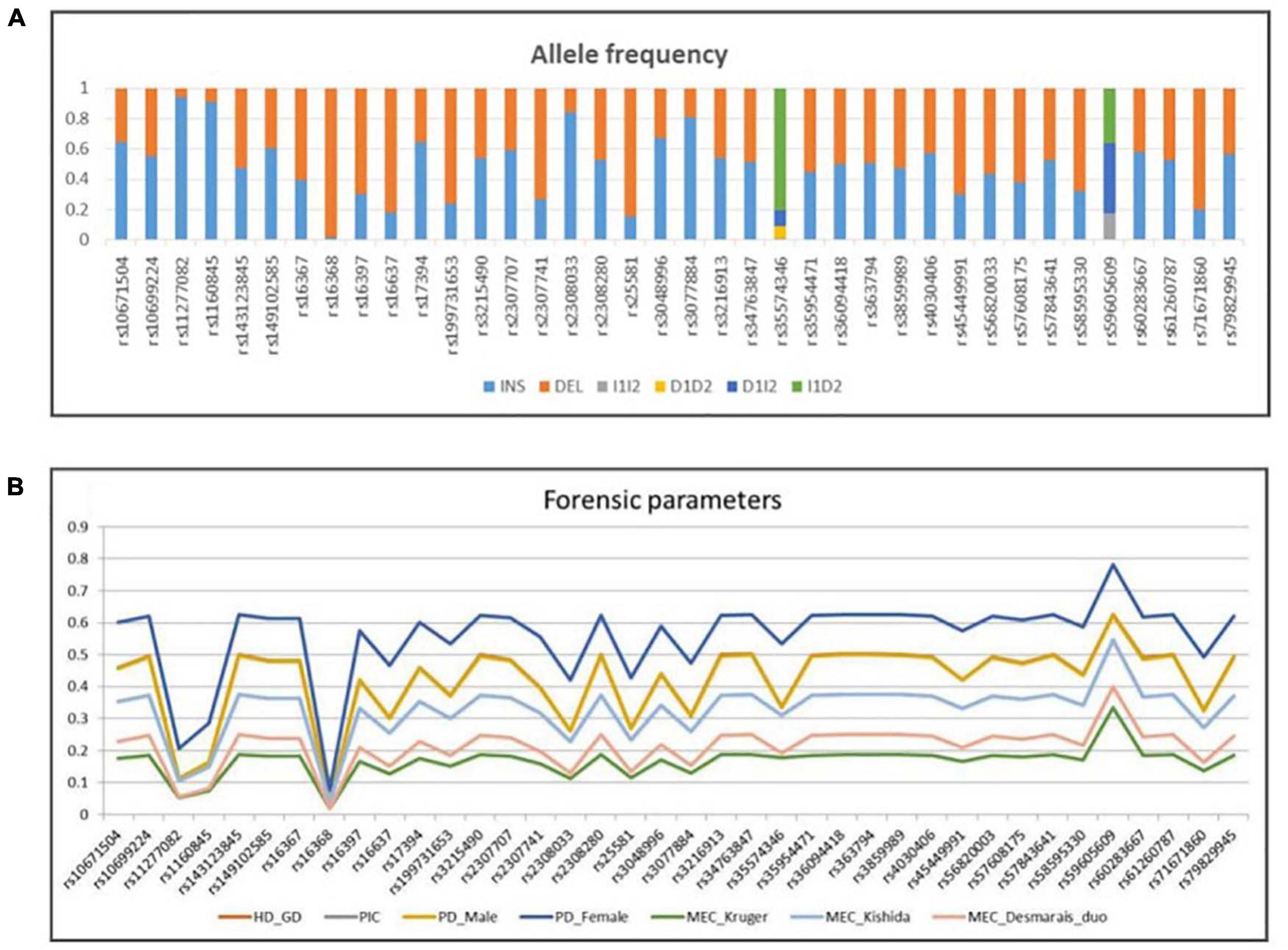 Figure 5. (A) Allele frequency and (B) forensic parameters of 38 X-InDel loci in a group of 200 unrelated males from Guangdong Han population.

In this study, a novel multiplex system for 38 X-InDels, mainly designed for the analysis of samples from East Asia, was developed for forensic human identification and kinship tests. The validation studies indicated that AGCU X-InDel 38 kit was sensitive, specific, robust, and highly informative. More importantly, due to high values of the PDs and MECs, the AGCU X-InDel 38 kit was significantly powerful in human identification and could be used as a complementary tool for kinship tests, especially in some deficiency cases.

The studies involving human participants were reviewed and approved by the Biomedical Ethical Committee of the Southern Medical University. The patients/participants provided their written informed consent to participate in this study.

LC and YW performed the data analyses and wrote the manuscript. XP and WW performed the experiment. WD and XH helped perform the analysis with constructive discussions. CX contributed to the manuscript submission and revision. ZT conducted the collection of case samples and population samples. ChaoL and ChanL contributed to the conception of the study. All authors listed have made a substantial, direct and intellectual contribution to the work, and approved it for publication.

The authors would like to thank all sample donors for their contributions to this validation study.

The Supplementary Material for this article can be found online at: https://www.frontiersin.org/articles/10.3389/fgene.2021.670482/full#supplementary-material

Copyright © 2021 Chen, Pan, Wang, Du, Wu, Tang, Xiao, Han, Liu and Liu. This is an open-access article distributed under the terms of the Creative Commons Attribution License (CC BY). The use, distribution or reproduction in other forums is permitted, provided the original author(s) and the copyright owner(s) are credited and that the original publication in this journal is cited, in accordance with accepted academic practice. No use, distribution or reproduction is permitted which does not comply with these terms.