Case Report: Identification of a Novel Pathogenic Germline TP53 Variant in a Family With Li–Fraumeni Syndrome

Li–Fraumeni syndrome (LFS) is an inherited autosomal dominant disease characterized by a predisposition to many cancers. Germline pathogenic variants in TP53 are primarily responsible for LFS. By performing a targeted sequencing panel in a proband with liver carcinoma having a deceased son affected by osteosarcoma, we found the novel heterozygous frameshift variant c.645del (p.Ser215Argfs*32) in the TP53 gene. This variant co-segregated with typical LFS cancers in the family pedigree, consistent with the pathogenicity of this novel and previously undescribed TP53 variant.

LFS is mainly associated with germline variants in the TP53 gene, a tumor-suppressor gene whose protein product is a transcription factor involved in several cell functions such as DNA repair, cell cycle arrest, and senescence as well as autophagy, apoptosis, and necrosis (Bougeard et al., 2015; Miller et al., 2016).

Importantly, p53 protein works not only as a transcriptional regulator, but can also act in the cytosol and mitochondria to promote apoptosis through transcription-independent mechanisms (Barnoud et al., 2021).

Because wild-type p53 protein works as a tumor suppressor, variants in the tumor-suppressor gene TP53 that disrupt protein function or stability could be responsible for the accumulation of genomic alterations, culminating in the development of tumors, especially LFS-related cancers (Zhou et al., 2017; Di Agostino et al., 2019).

In addition to the loss of function that a mutation in TP53 may cause, certain mutant forms of p53 can exert dominant-negative effects over the coexpressed WT p53 allele, whereas others can exert additional oncogenic activity by a gain-of-function mechanism (Barnoud et al., 2021).

Heterozygous TP53 germline variants are reported in several families affected by LFS (Egan et al., 2012; Valdez et al., 2017; Kharaziha et al., 2019). Subjects who are carriers of a pathogenic TP53 variant possess a variable lifetime risk of developing cancer, and the phenotype can differ from cancer-free over a lifetime to fully penetrant, depending on the functional and structural effects of the causative TP53 variant (Olivier et al., 2010; de Andrade et al., 2017; Bittar et al., 2019). Here, we report a novel and rare heterozygous TP53 germline pathogenic variant (c.645del) found in the proband, his son, and three relatives from one non-consanguineous south Italian family having an aggregated history of typical LFS cancers.

The proband (III.2) is a 64-year-old deceased male affected by liver cancer, having two healthy daughters and one 20-year-old deceased son affected by osteosarcoma (Figure 1). Because of this latter finding as well as an aggregated family cancer history suggestive of p53 dysfunction, we analyzed the proband with a next-generation sequencing (NGS) tumor panel containing the TP53, BRCA2, BRCA1, ATM, CHEK2, and PALB2 genes (Supplementary Methods). NGS analysis showed a heterozygous frameshift TP53 variant ([GRCh37/hg19] chr17: g.7578204delA; NM_000546.6: c.645del (p.Ser215Argfs*32) in the exon 6 of the TP53 (III.2, Figure 2A). Sanger sequencing confirmed the presence in the proband of the heterozygous frameshift c.645del variant in the exon 6 of the TP53 gene (Figure 2B). No genetic alterations were detected within the other genes included in the panel. 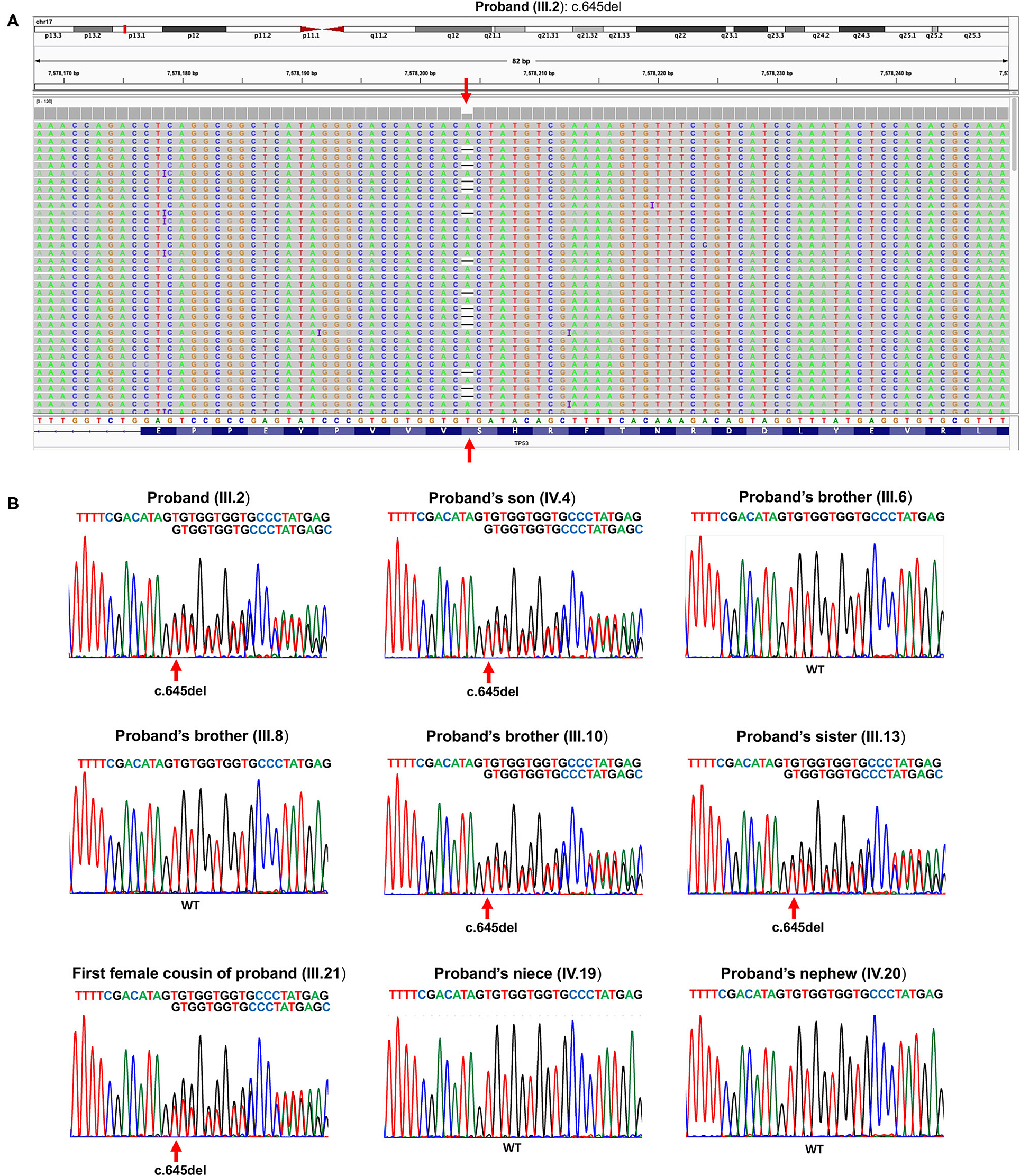 Here, we describe for the first time a family with a novel and rare germline variant in the TP53 gene responsible for LFS syndrome. Because the proband had a deceased affected son with osteosarcoma and a family having an aggregated history of typical LFS cancers, a mutational screening of the TP53 gene was offered to him and his family members. Genetic testing revealed a heterozygous pathogenic germline TP53 variant c.645del in the proband, his son, and three probands' relatives. At the protein level, the revealed c.645del variant causes a frameshift with the introduction of a premature stop codon within the p53 DNA binding domain (DBD) (p.Ser215Argfs*32). The DBD domain, located in the central part of the p53 protein, contains most of the LFS-associated missense variants (Bouaoun et al., 2016; AlHarbi et al., 2018). However, also frameshift pathogenic variants in the p53 DBD, such as c.685dup (p.Cys229Leufs*11), have been observed in a family with LFS (Ji et al., 2018).

The TP53 frameshift variant identified here, not previously described in any database including HGMD, LOVD, and ClinVar, was classified as pathogenic based on the American College of Medical Genetics (ACMG) criteria (PVS1+PM2+PP1_Moderate) (Richards et al., 2015).

It is well-known that carriers of TP53 pathogenic variants have an increased risk of early onset cancers, often recognized as LFS syndrome (Kharaziha et al., 2019; Yamamoto et al., 2020). Although LFS is a highly penetrant cancer syndrome, its penetrance in subjects with a TP53 germline variant varies depending on the variant type (Varley et al., 2001; Bougeard et al., 2015). For example, the most severe variants of TP53 associated with earlier tumor onset are the dominant-negative missense variants because of their ability to produce malfunctioning or non-functioning p53 tetramers (Frebourg et al., 2020). Instead, null variants, including frameshift variants, such as that described here, are mainly observed in families with typically adult cancers with a lower disease penetrance (Bougeard et al., 2015; Frebourg et al., 2020).

The novel inherited frameshift TP53 variant described here results in a predicted truncated protein with a premature stop codon. There are two hypotheses explaining the consequence of this TP53 frameshift variant on p53 protein function. One suggests that the modified mRNA could be unstable and, thus, degraded by non-sense-mediated mRNA decay. The other is that the modified mRNA could be transcribed into a truncated protein having a dominant-negative effect that disrupts the p53 tumor-suppressor function.

Here, we describe a family carrying a novel pathogenic germline variant of the TP53 gene. This inherited frameshift variant is extremely rare because more than 70% of the pathogenic TP53 variants in LFS families were observed to be missense variants (AlHarbi et al., 2018). This family case report highlights the importance of offering genetic counseling and genetic testing to all family members at high risk to be carriers of TP53 inherited pathogenic variants.

The datasets presented in this article are not readily available due to ethical and privacy restrictions. Requests to access the datasets should be directed to the corresponding author.

The study was conceived by RI, FP, and NP. VB, FF, FP, and EC performed the experiments. FP, EC, FF, FB, VB, and RI analyzed and interpreted the data. FP, RI, FT, FF, and NP wrote the manuscript. VB, NP, and FT supervised the project. All authors contributed to the article and approved the submitted version.

FP is employed by Tecnologica Research Institute and Marrelli Health.

We thank Debora Caprella for her technical contribution.

The Supplementary Material for this article can be found online at: https://www.frontiersin.org/articles/10.3389/fgene.2021.734809/full#supplementary-material

Copyright © 2021 Paduano, Fabiani, Colao, Trapasso, Perrotti, Barbieri, Baudi and Iuliano. This is an open-access article distributed under the terms of the Creative Commons Attribution License (CC BY). The use, distribution or reproduction in other forums is permitted, provided the original author(s) and the copyright owner(s) are credited and that the original publication in this journal is cited, in accordance with accepted academic practice. No use, distribution or reproduction is permitted which does not comply with these terms.