Background Despite psychiatric traits were associated with intracranial aneurysms (IAs) in observational studies, their causal relationships remain largely undefined. We aimed to assess the causality between psychiatric traits and IAs.

Intracranial aneurysms (IAs) are widespread life-threatening diseases (Vlak et al., 2011). Rupture of IAs results in aneurysmal subarachnoid hemorrhage (aSAH), a form of stroke that accounts for 5% of all strokes. Half of aSAH patients are younger than 55 years and a third of the patients die within the first few days to weeks of bleeding. Most survivors suffer from long-term disability or cognitive impairment (Nieuwkamp et al., 2009).

Causal inference between diseases and complex traits could be conducted under the development of Mendelian randomization (MR) and genome-wide association studies (GWAS). MR is a causal inference method for estimating the modifiable exposure (for example, insomnia) to an outcome (for example, IAs) via taking genetic variants as instrumental variables (IVs) for the exposure (Davey Smith and Ebrahim, 2003). MR method decreases residual confounding since the IVs are initially realigned in a random manner without connection to environmental factors, behaviors, and self-selected lifestyle factors. Besides, the MR method conquers reverse causality since IVs are determined irrespective of disease progression or development. Here, we conducted bi-directional two-sample MR analyses using GWAS summary data of IAs and the ten above-mentioned psychiatric traits to infer their causality. Clarifying such causal relationships from the genetic perspective may have important implications for primary prevention strategies in IA patients.

Summary data from GWAS for IAs and eight psychiatric traits was gathered from released researches with the biggest European population sample (Table 1). For restriction, only summary data of SNPs that were significantly related to mood instability and anxiety disorders (the other two psychiatric traits) was obtained. GWAS of IAs were generated from the stage 1 association study of European ancestry, consisting of 7,495 cases and 71,934 controls passing quality control thresholds. The definitions of the ten psychiatric traits were laid out in Supplementary Table S1. 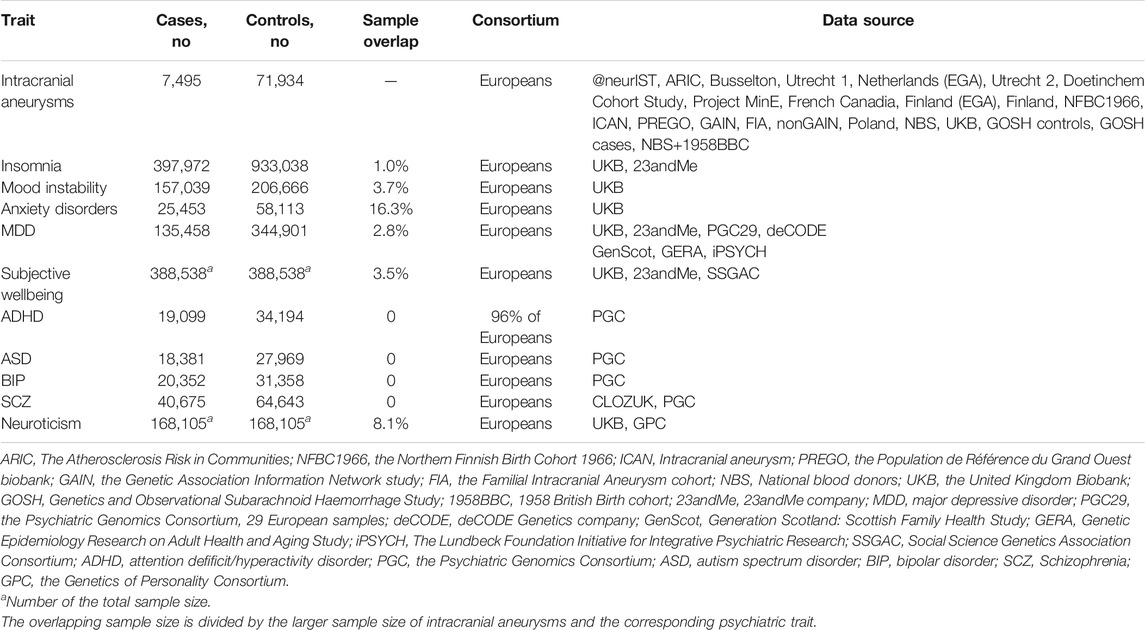 TABLE 1. Details of GWAS phenotypes utilized for each trait.

Figure 1 depicted our research workflow. The following documented valid IVs were selected based on the suppositions of MR. First, SNPs that under the threshold (p < 5 × 10–8) and associated with the exposure were selected as candidate IVs. Second, We used linkage disequilibrium (LD) (Chang et al., 2015) to further exclude dependent SNPs. Third, the significant SNPs in LD (r2 > 0.05) were filtered out based on bi-directional MR requirements (no LD or overlap in the IVs between the exposure and outcome) (Davey Smith and Hemani, 2014). Fourth, potentially pleiotropic SNPs were removed by excluding those with suggestive association with IAs (p < 10–5) (Bakker et al., 2020). The rest SNPs were defined as valid IVs for MR analyses. Supplementary Tables S2–S19 showed the valid IVs in this study. The F statistics (Lawlor et al., 2008) and the 95% confidence interval (CI) (Burgess et al., 2016) were computed to quantify whether the IVs were strongly related to the exposure. We set the p < 0.005 (0.05/10) for multiple comparisons to test each result to avoid false positive results. 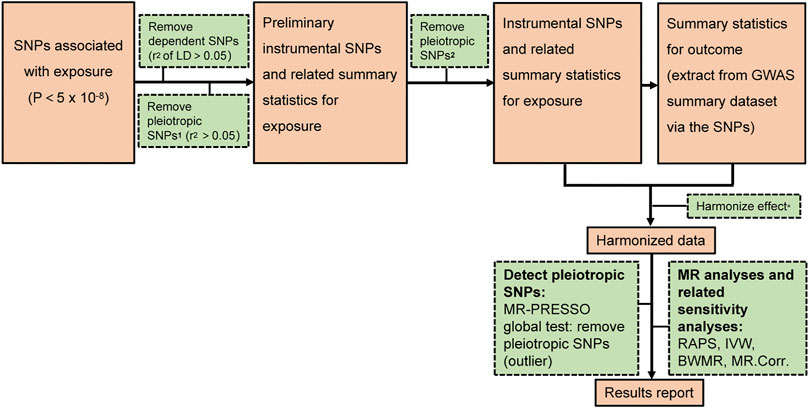 Here, we used four different methods, specifically the Robust Adjusted Profile Score (RAPS) method, the Inverse Variance Weighted (IVW) method, the Bayesian Weighted Mendelian Randomization (BWMR), and the MR (MR.Corr) method. Compared with the other three methods, the RAPS method is more efficient in dealing with residual horizontal pleiotropy and outliers, thereby is chosen as the primary method (Zhao et al., 2018; Qi and Chatterjee, 2021). RAPS is designed to conduct two-sample MR analysis with summary statistics by Zhao etc (Zhao et al., 2018). We applied the RAPS method in sensitivity analyses to confirm MR presumptions and control for overdispersion as an indicator for systematic pleiotropy. The IVW method is based on the following assumptions: the overall bias is zero, or all SNPs are valid IVs (Bowden et al., 2016). Potential heterogeneity, measured by Cochran’s Q statistic, was evaluated via multiplicative random effects IVW (Hemani et al., 2018). BWMR method could efficiently investigate the causal effect between the exposure and outcome via the standard error and p-value based on GWAS summary statistics (Zhao et al., 2020). MR.Corr is a method employing correlated instrumental variants explaining correlated horizontal pleiotropy during two-sample MR (Cheng et al., 2020). All statistics analyses were executed with two-sample MR and MR-PRESSO packages in R version 3.5.3. 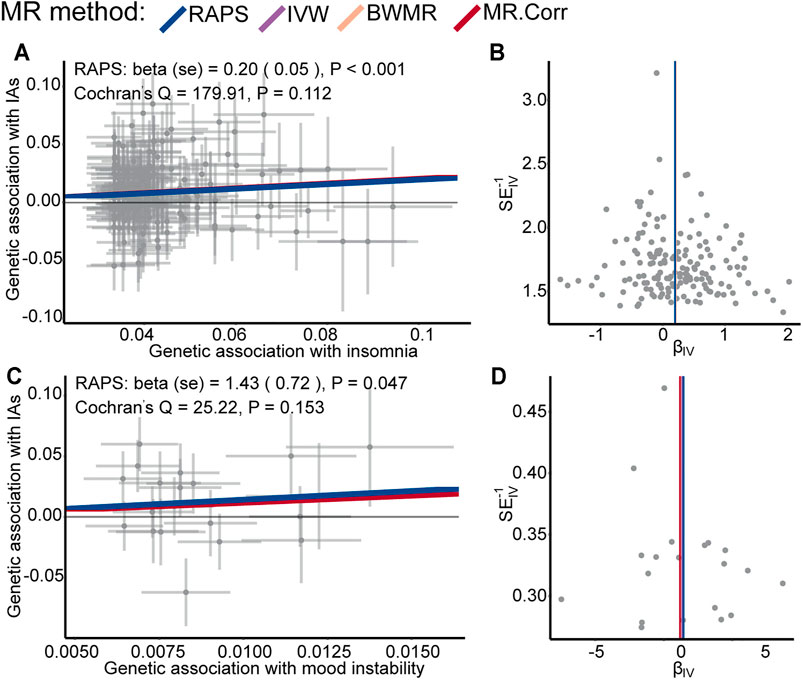 TABLE 2. The causal effects of the ten psychiatric traits on IAs by two-sample MR analyses.

Because we could only get access to significantly associated SNPs of the summary data for anxiety disorders and mood instability, MR analyses of IAs on these two traits could not be conducted. The genetic effect sizes for the rest eight psychiatric traits vs. that on IAs for the valid IVs were displayed in Supplementary Figure S4. Although each F statistic was greater than 51, indicating strong instrumental effects, no causal effects of IAs on the eight psychiatric traits were found (detailed OR, 95% CI, and p value were shown in Table 3). Additionally, Cochran’s Q-test indicated null horizontal heterogeneity or pleiotropic effect (Supplementary Figure S4).

TABLE 3. The casual effects of IAs on the eight psychiatric traits by two-sample MR analyses.

In this study, we firstly investigated the causal relationships between the ten psychiatric traits and IAs via two-sample bi-directional MR analyses. Our results demonstrated that insomnia had a risk effect on IAs and mood instability displayed a suggestive risk effect on IAs, whereas the other eight psychiatric traits had no significant effect on IAs. In the reverse MR analyses, no evidence implicated IAs as the cause of insomnia, MDD, subjective wellbeing, ADHD, ASD, BIP, SCZ, and neuroticism. Our instrumental variables were strong enough to avoid weak instrument bias according to the F statistics. The Cochran’s Q-test and scatter plots revealed null heterogeneity or pleiotropic effect.

Emerging evidence from prospective researches indicated that insomnia was correlated with increased risk of cerebral vascular disease (Wu et al., 2014; Zheng et al., 2019), including IAs. A recent meta-analysis including 23 cohorts demonstrated that insomnia significantly increased cardio-cerebral vascular events (He et al., 2017). Bakker et al. used 376 UKB phenotypes as exposure, including insomnia, to assess the risk factor of IAs in Europeans (Bakker et al., 2020). There were 20 valid SNPs used for generalized SMR (GSMR) analysis of insomnia on IAs, with the p = 0.0514. Here, we utilized summary data of insomnia not only from UKB but also 23andMe, expanding the valid SNPs to 159. Moreover, our four MR approaches fitted well in the linear relation between the SNPs effect on IAs and insomnia. Although inconsistent with Bakker’s result, our result indicated that insomnia had a causal risk effect on IAs. The causal relationship between insomnia and IAs reinforces the notion that prevention and early diagnosis of insomnia may help prevent IAs. However, the precise mechanism linking insomnia to IAs is unclear. Some of the proposed pathophysiological mechanisms may shed light on how insomnia might predispose an individual to IAs. Insomnia symptoms may alter cerebrovascular health through elevated circulating catecholamine (Irwin et al., 1999), sympathetic nervous activity (Dettoni et al., 2012), inflammation (Grandner M. A. et al., 2013; Grandner M. et al., 2013; Ferrie et al., 2013), endocrine or metabolic dysregulation (Okun, 2011; Westerlund et al., 2013). Clinical researches revealed that insufficient sleep might affect the levels of circulating catecholamine that influence response to emotional or physical stress (Irwin et al., 1999). Further study is needed to unravel the complex connection between insomnia and the development of IAs.

It has been reported that stroke was positively associated with anxiety (Lambiase et al., 2014), depression (Surtees et al., 2008; Henderson et al., 2013; Barlinn et al., 2015), and BIP (Prieto et al., 2014). A prospective cohort of 6,019 participants revealed higher levels of anxiety symptoms correlated with increased risk of occasional stroke (Lambiase et al., 2015). Are these psychiatric traits the risk factors of IAs (one of the main event of stroke)? However, Our results demonstrated anxiety disorders, MDD, BIP were not causally related to the development of IAs. The causal risk effect of mood instability on IAs was nominal significant according to the RAPS method (p = 0.047, 0.005 < p < 0.05). Although the p-values from IVW, BWMR, and MR.Corr methods were >0.05, similar effect sizes were obtained. Therefore, mood instability may be a potential risk factor for IAs. Further studies with larger sample sizes and additional mood instability genetic instruments are required to disentangle causality.

Whether there was reverse causality between psychiatric traits (depression etc.) and stroke had been debated previously (Begovac et al., 2008; Brunner et al., 2014; Lemos et al., 2020). Here, we did not detect significant genetic evidence regarding the causality of IAs to the eight psychiatric traits (insomnia, MDD, subjective wellbeing, ADHD, ASD, BIP, SCZ, and neuroticism).

More caution is needed about applying the effect size obtained by the MR method since the OR implies the mean impact of lifetime exposure. Insomnia may differ sharply across time periods. Therefore, the risk effect of insomnia on IAs is time-dependent.

Strengths of our study included the two-sample bi-directional MR analyses and the use of summary-level data from thus far the biggest sample numbers. Hence, the possible effect of reverse causality and conventional confounders could be reduced. In addition, we conducted comprehensive analyses including four MR approaches and the heterogeneity tests to avoid potential pleiotropic effects. However, it should be noted that our results were based on European populations. Thus, we should be cautious about applying this conclusion to non-Europeans since a distinct environment may significantly impact psychiatric traits and IAs.

Several limitations of the present study should also be recognized. Firstly, there was sample overlapping between the exposure and outcome because of the summary level data. Secondly, we did not conduct MR analyses of IAs on anxiety disorders and mood instability because we could only get access to significantly associated SNPs of the summary data for anxiety disorders and mood instability. Thirdly, the follow-up analysis to interpret the biological significance of the current result was lacking.

This study was supported by the grant of the Natural Science Foundation of China (NSFC: 82072795).

The Supplementary Material for this article can be found online at: https://www.frontiersin.org/articles/10.3389/fgene.2021.741429/full#supplementary-material

Begovac, B., Begovac, I., and Paladino, J. (2008). Delusional Disorder of the Paranoid Type and Unruptured Intracerebral Aneurysm-Iis There an Association? Acta Med. Croatica 62 (1), 61–64.

Copyright © 2021 Peng, Chen, Zhang, Guo, Dong, Xu, He, Guo and Wan. This is an open-access article distributed under the terms of the Creative Commons Attribution License (CC BY). The use, distribution or reproduction in other forums is permitted, provided the original author(s) and the copyright owner(s) are credited and that the original publication in this journal is cited, in accordance with accepted academic practice. No use, distribution or reproduction is permitted which does not comply with these terms.