A Closing Window of Opportunity to Save a Unique Marine Ecosystem

Five years in the making, a massive oil spill of 1 million barrels is imminent in the Red Sea off the coast of Yemen. Emergent action must be taken by the United Nations and its International Maritime Organization (IMO) to remove the oil, despite regional political tensions, as a spill will have disastrous environmental and humanitarian consequences, especially if it occurs during winter. With millions of barrels of oil passing through the Red Sea each day, a regional strategy must be drafted for leak prevention and containment that is specific to the Red Sea’s unique ecosystems, unusual water currents, and political landscape.

A massive leak of over 1 million barrels of oil (4 times the Exxon Valdez tanker spill) is anticipated shortly off the coast of Yemen, in the Red Sea, where the Safer floating storage and offloading unit (FSO) is in the final stages of decay. In May of this year seawater breached the single hull and entered the engine compartment (Michael, 2020), while on September 25 a global maritime news outlet reported that Saudi Arabia has detected an “oil spot” next to the tanker (Chambers, 2020). Oil spills are typically emergent events that take governments and conservationists by surprise. The Safer has been stranded and deteriorating off Yemen’s coast since 2015, giving the world the most advanced warning ever of a major oil spill. But this unique opportunity is being squandered.

Implications of This Oil Spill

A 1-million-barrel leak guarantees a regional environmental and humanitarian disaster. Devastation to the health and livelihoods of millions of people living in half a dozen countries along the Red Sea coast would be assured. The air they breathe, the food they harvest at sea, and their water desalination are all at immediate risk. In addition, the oil spill will affect the rest of the international community by degrading a critical global resource. The coral reefs of the northern Red Sea and Gulf of Aqaba are understood to be among the last reef ecosystems in the world to thrive beyond mid-century (Fine et al., 2013; Osman et al., 2018). Our last chance to pump off the oil in the vessel and stockpile oil booms regionally to contain an imminent spill is quickly disappearing.

The Houthis, a political and armed movement in northern Yemen, control access to the tanker. They have repeatedly denied UN requests to board the vessel. The UN International Maritime Organization (IMO) has deployed experts to develop a risk impact analysis and contingency plans to improve management of emergency response operations in the event of a spill from the Safer (International Maritime Organization, n.d.). But the imminent threat to a unique global natural resource justifies that IMO Secretary-General Kitack Lim, IMO Director, Marine Environment Division Mr. Hiroyuki Yamada, and UN Secretary-General António Guterres take coordinated action and achieve access to the Safer by all means necessary in order to pump off the oil. They hold the ultimate responsibility to galvanize and lead member nations to achieve this. Whether this could be accomplished by providing Yemen humanitarian supplies and aid equal to the value of the oil is unclear. The Safer and its oil are owned by the Yemeni state-run Safer Exploration and Production Operations Company (SEPOC), but they lost control of the FSO to the Houthis in 2015. Without access to the storage vessel they are unable to take steps to prevent a spill, although they continue to extract oil from Yemen’s Marib basin and pump it onto tankers in the Gulf of Aden.

Another key consideration for policy efforts is that water has a long residence time within the Red Sea, and the strongest currents driving water into the Red Sea occur during winter. Figure 1 shows results from modeling experiments of oil spill dispersion patterns over 30 days in winter and in summer. The underlying surface currents for these experiments are climatological (Biton et al., 2010). The model is a conservative estimate of the potential dispersal of spilled oil at these different time periods. The affected area is expected to be even larger, as wave-induced turbulence is not accounted for in this model. In addition, when the model was run beyond 30 days even greater dispersion was predicted (not shown). It is clear from the analysis that in winter oil dispersion will extend further north and into the center of the Red Sea as compared to a spill dispersing during summer. Therefore, action should be taken before winter, as a winter spill ensures that the oil will spread further north and will remain trapped for longer within the Red Sea. Secretary-General Guterres and IMO officials should act immediately to secure the livelihood of the Red Sea’s peoples and the world’s largest marine refuge from climate change. 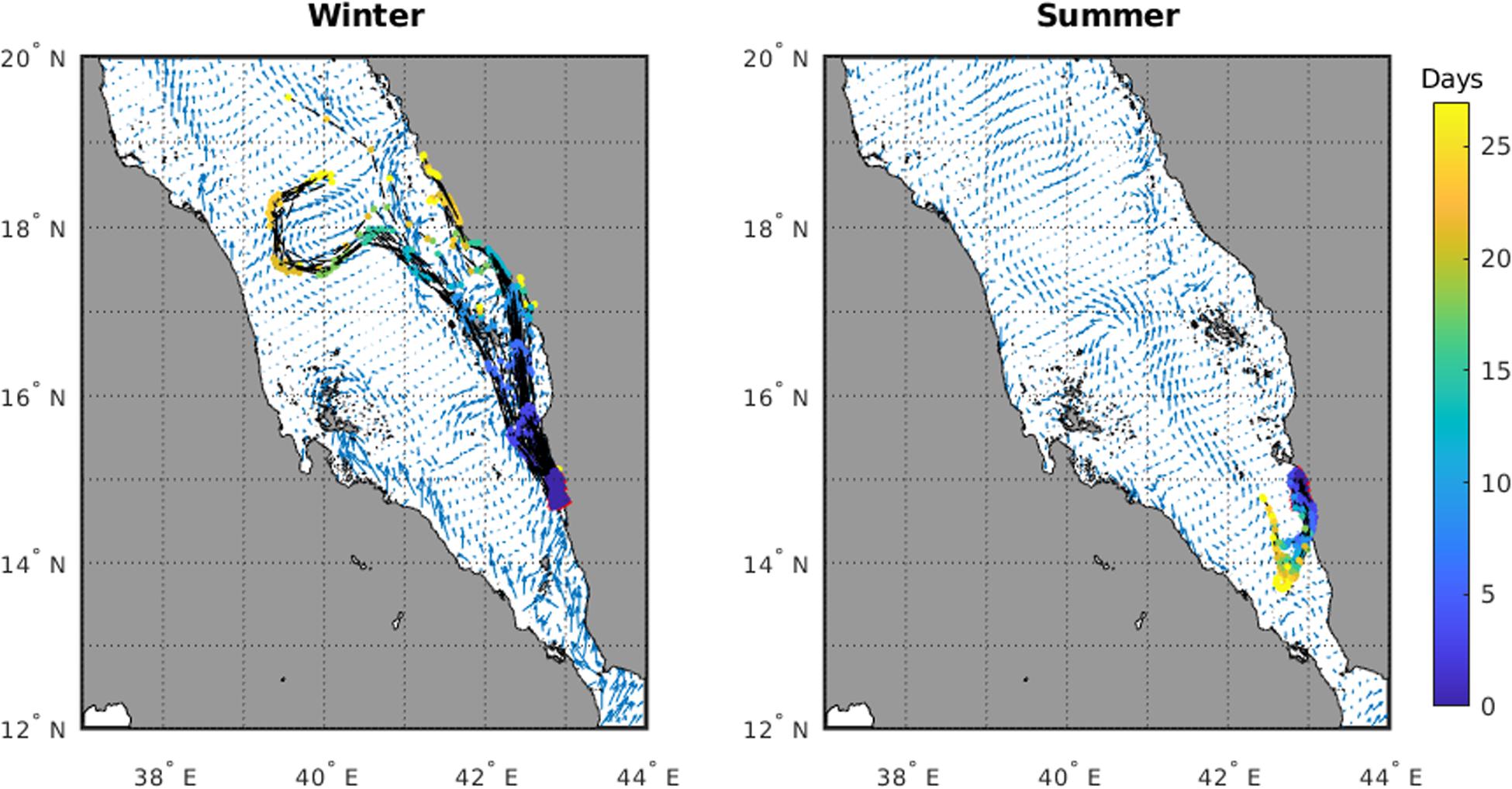 Looking beyond the Safer, there are 4.8 million barrels per day of crude oil and refined petroleum products transported through the Bab el Mandeb strait into the Red Sea, bound for Europe, the United States, and Asia via the Suez Canal (U.S. Energy Information Administration [USEIA], 2017). Coral reefs line almost all 4,000 km of the Red Sea’s coastlines and also surround multiple islands within it (Figure 2), so that oil spills in any part of the Sea threaten these valuable ecosystems. A regional strategy must be drafted for leak containment that is specific to the Red Sea’s unique water currents. Oil companies transporting their products via the Red Sea must be made to contribute annually to an UN-mandated and regulated fund for spill mitigation. Additional financial support for this effort can come from The World Bank Group, which has been active in public and private sector pollution management for the past several decades in a large variety of sectors including transport, industry, and energy (The World Bank Group, 2010). An online marine pollution reporting system (POLREP) was set up by the UN Environment Program Action Plan for the Protection, Management, and Development of the Marine and Coastal Environment of the Northwest Pacific Region (NOWPAP), which enabled countries in the region, including China, Japan, Korea, and Russia to speedily share information on a massive spreading spill and work together to contain it. Such an information sharing platform must be established for the Red Sea region as well, considering the enormous volume of oil continuously shipped through it. 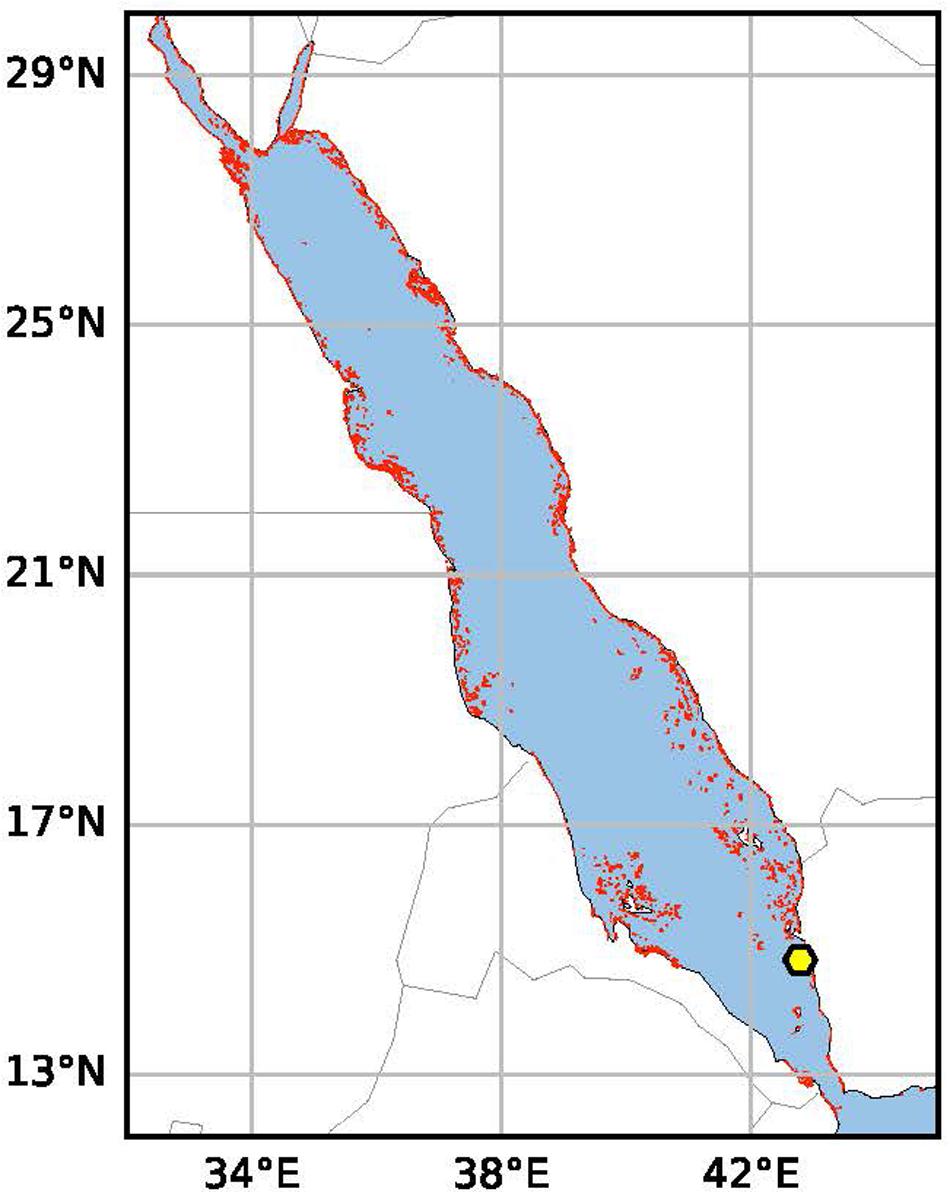 Figure 2. Map of the Red Sea with reefs denoted in red and the Safer tanker’s location marked in yellow (UNEP-WCMC et al., 2018).

While the burning of fossil fuels continues to drive climate change and constitutes the biggest global threat of our era, oil transport via tankers and pipelines also batter communities and ecosystems around the world with little means of protecting themselves from oil spills. Importantly, while regional efforts to mitigate oil spill damage may seem small in scale, such actions will have a substantial impact. The U.N., the IMO, and global oil extraction, refinement, and shipping companies must immediately take action to protect the Red Sea and its critical marine resources by stopping this potentially massive and devastating spill.

We thank Benjamin CC Hume for helping to prepare the map of coral reefs in the Red Sea.

Copyright © 2020 Kleinhaus, Voolstra, Meibom, Amitai, Gildor and Fine. This is an open-access article distributed under the terms of the Creative Commons Attribution License (CC BY). The use, distribution or reproduction in other forums is permitted, provided the original author(s) and the copyright owner(s) are credited and that the original publication in this journal is cited, in accordance with accepted academic practice. No use, distribution or reproduction is permitted which does not comply with these terms.