Internodal Analysis of Avicennia marina in the Western Arabian Gulf

The growth of Avicennia marina (A. marina) was not previously assessed using internodal analysis in the Western Arabian Gulf. The node production in 40 branches/axillary shoot in Syhat city, Saudi Arabia, ranged from 6 to 9 nodes y–1. Moreover, the annual cycles of the internodal length represent the branch growth rate in centimeters per year (ranged from 12 to 43 cm; median of 19 cm) for minima to minima point and (from 15 to 46.5 cm; median of 25.5 cm) for maxima to maxima point. The results obtained in this study are fundamental for various applications, ranging from the planning of restoration and monitoring activities to reproduction estimates and establishing a useful baseline to assess responses to climate change via simple measurements. In particular, mangrove species are important as nurseries for many species for food and shelter, carbon sinks, and coastal protection.

Mangroves inhabit intertidal zones of tropics and subtropics (Tomlinson, 1986) and provide many ecosystem services (Barbier et al., 2011). Avicennia marina (A. marina) is the most diverse mangrove species worldwide (Tomlinson, 1986). Two species of mangrove, such as A. marina from Avicenniaceae and Rhizophora mucronata from Rhizophoraceae, are found in the Arabian Gulf (Zahed et al., 2010); however, A. marina is the dominant mangrove species in the Arabian Gulf (Price et al., 1993; Almahasheer et al., 2018). While phenological studies of A. marina on some parts of the Arabian Gulf exist, e.g., Hegazy (1998) and Yasseen and Abu-Al-Basal (2008), estimation of their node production per branch per year and their annual growth in centimeter and plastochron index has not been reported in the Western Arabian Gulf. The importance of estimating internodal production and growth of mangroves in the Arabian Gulf can help future studies in this area to better understand their status and the contribution of A. marina to the adjacent ecosystems. These data also help balance global reports with information about an area that was overlooked.

Avicennia marina internodal measurements were conducted in July 2019 at Syhat city (26°30′28″N 50°02′30″E), Eastern Province, Kingdom of Saudi Arabia, which is situated on the coast of the Western Arabian Gulf (Figure 1). The number of samples selected for the internodal analysis in this study was 40 trees. This number of samples has been validated before, e.g., Duarte et al. (1999) selected eight Avicennia alba, 26 Sonneratia caseolaris, and 12 Rhizophora apiculata trees in South East (SE) Thailand. Also, Almahasheer et al. (2016) selected a variable number of A. marina between 30 and 75 trees among diverse locations in the Central Red Sea. 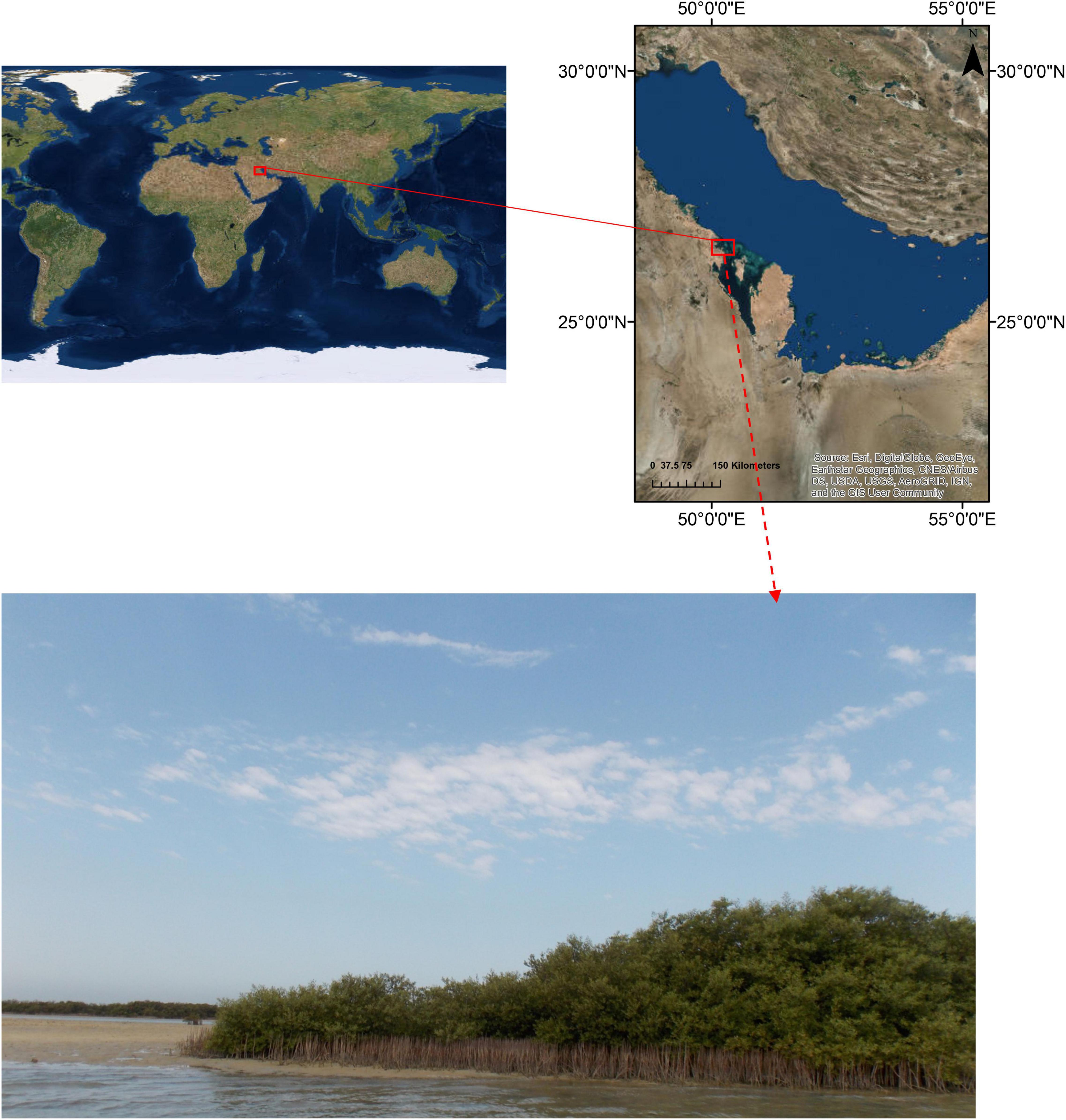 Because the plant repeats models (e.g., nodes, leaves, and roots), counting nodes in axillary shoots and apical shoots is equivalent (Duke and Pinzon, 1992). Therefore, the number of nodes that plants produce annually in each measured (branches/axillary shoot, n = 40) was estimated according to Duarte et al. (1999) and Almahasheer et al. (2016).

Mangrove growth can be reconstructed based on cycles of internodal length (Duarte et al., 1999), which allows us to evaluate the internodal production and the yearly growth by measuring the distance between every two nodes. The main criteria for selecting a tree are the clarity of following and seeing the complete branch or axis. The first step is to count and measure all nodes from the apical meristem or the axillary meristem.

The measurements of each node were arranged in sequential order, starting from the meristem to the hypocotyl. As a result, a long-term filter with a running average of n = 14 was created to eliminate long-term variability and was then subtracted from the raw sequences. Later, a short-term filter was subsequently produced by filtering the data to remove short-term variability with a consecutive average of n = 3 and n = 4. Two short-term filters were used in order to double-check the results.

The annual growth was calculated as the sum of the length of the internodal cycle for each (branches/axillary shoot) separately (i.e., from the measured distance between the nodes for each identified cycle, Figure 2). 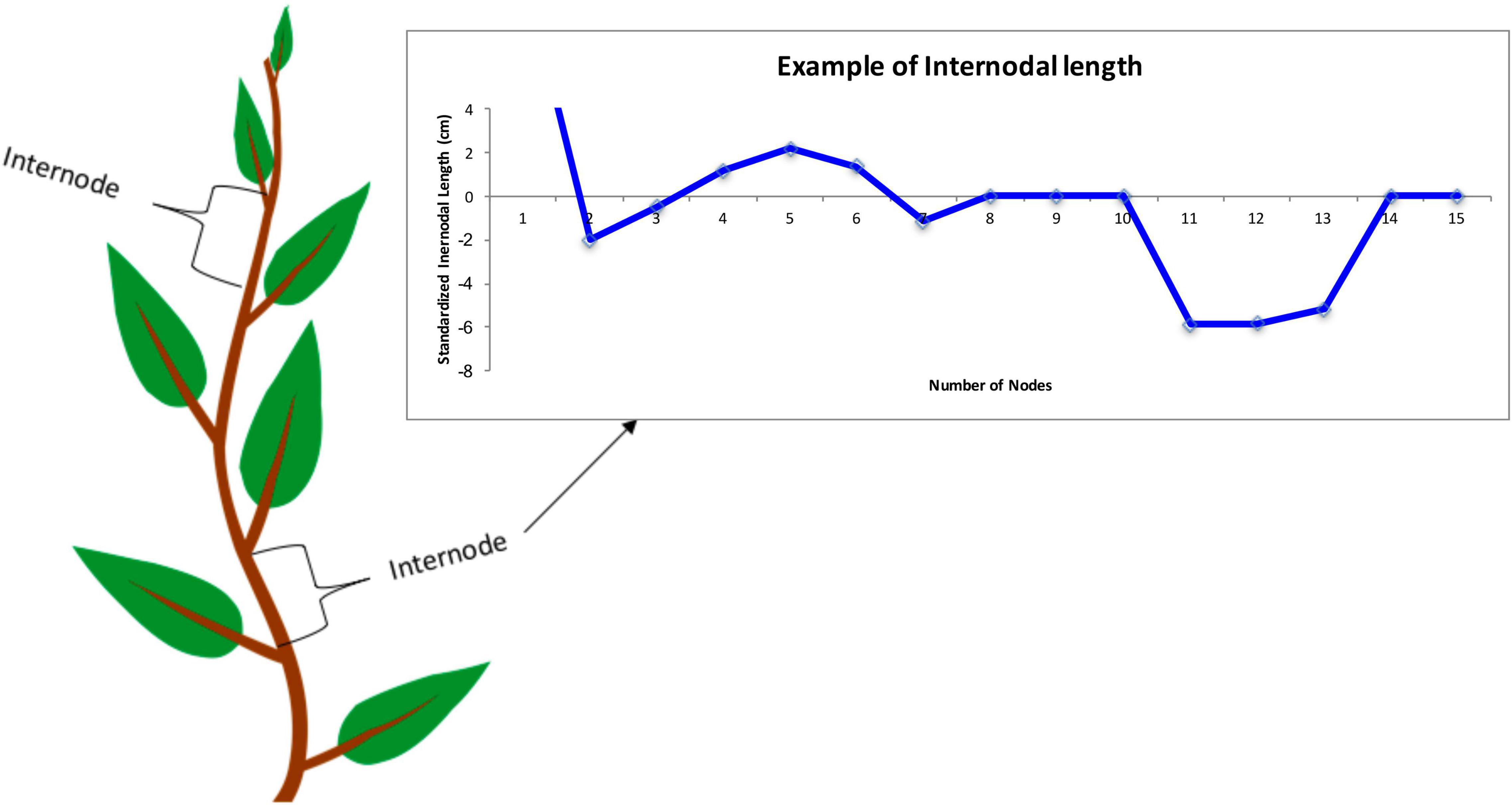 Figure 2. An example of measuring a node on a branch and then analyzing the internodal length.

To calculate the plastochrone interval (PI) (i.e., the average time in between the production of a node) (Gill and Tomlinson, 1971) was calculated as the average ratio between the time elapsed and the number of nodes produced annually.

Figure 3. Number of (A) nodes produced, (B) plastochrone interval, and (C) growth by centimeter in each (branch/axillary shoot) annually produced by Avicennia marina. Total number of branches measured n = 40.

In general, plants repeat few models while growing, e.g., internodes, leaves, and roots (Duarte et al., 1999). Node production of A. marina in this study ranged from 6 to 9 nodes y–1, with an average of 7.1 nodes y–1, which is slightly lower than that reported from the Red Sea (9.44 nodes subbranch y–1 Almahasheer et al., 2016), nevertheless, within the range of other mangrove species that produced 3.8 nodes y–1 in Panama to 30 nodes y–1 in Thailand (Duke and Pinzon, 1992; Thampanya et al., 2002), and consistent with Rhizophora apiculata of 7.3 nodes y–1 in Southeast (SE) Asia (Duarte et al., 1998). Additionally, the PI of this study ranged from 40.5 to 60.8 days with an average of 52 days, higher than the PI of Red Sea A. marina of 39 days (Almahasheer et al., 2016), whereas stem elongation of branches in this study averaged from 20 to 28 cm equivalent to the annual growth of A. marina in King Abdullah Economic city located in the Central Red Sea (Almahasheer et al., 2016). The slow growth of A. marina in this region is possible because of the harsh environmental conditions of the Arabian Gulf (Sheppard et al., 2010), along with the effects of major pollutions affecting the area, e.g., 1991 oil spill (Price, 1998), and their position at the nethermost limit of their dispersal (Duke, 1990).

The results obtained within the study are essential for several applications, from the planning of restoration and monitoring activities to reproduction estimates via simple measurements. However, a comprehensive study of internodal analysis across different locations and population dynamics of A. marina in the Arabian Gulf is necessary and urgent. In particular, this area is characterized by a hyperarid environment that could be seen as a natural incubator to evaluate future climate change effects.

The original contributions presented in the study are included in the article/supplementary material. Further inquiries can be directed to the corresponding author/s.

The author received no financial support for the research of this article.

Copyright © 2021 Almahasheer. This is an open-access article distributed under the terms of the Creative Commons Attribution License (CC BY). The use, distribution or reproduction in other forums is permitted, provided the original author(s) and the copyright owner(s) are credited and that the original publication in this journal is cited, in accordance with accepted academic practice. No use, distribution or reproduction is permitted which does not comply with these terms.